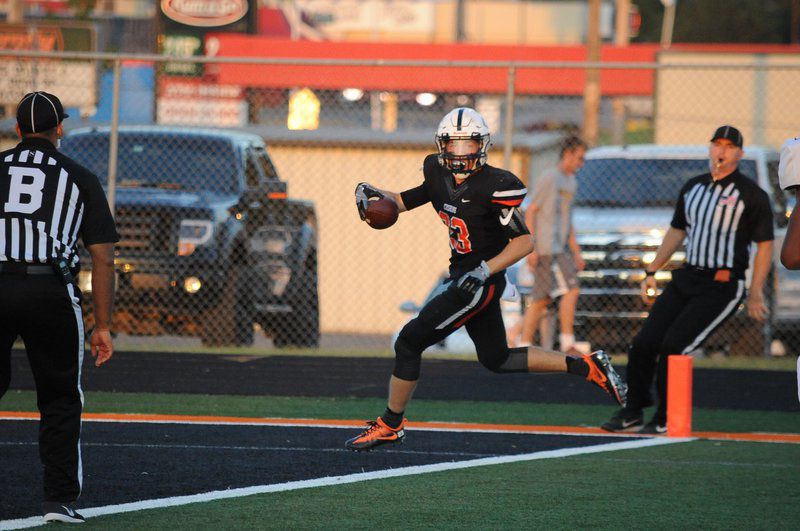 Jordan Bishop/Stillwater News Press Cushing High graduate Trevor Ailey recently walked on to the Oklahoma State football team. Despite having no interest outside of Div. II schools, Ailey always knew he could make it at OSU. 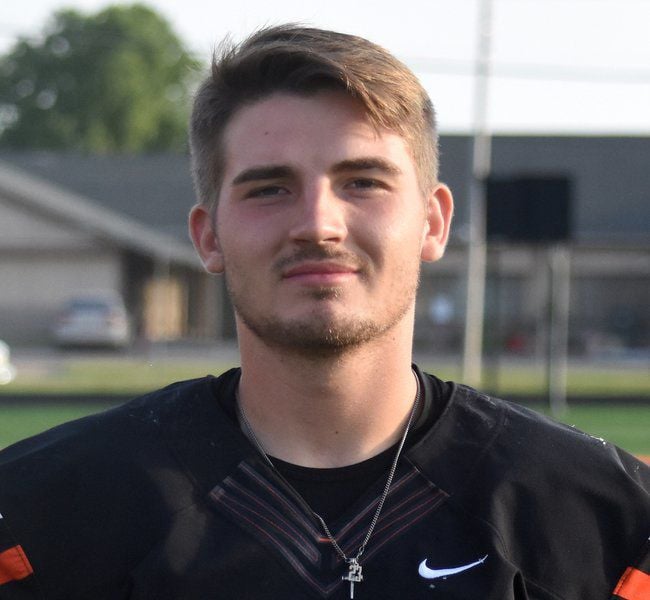 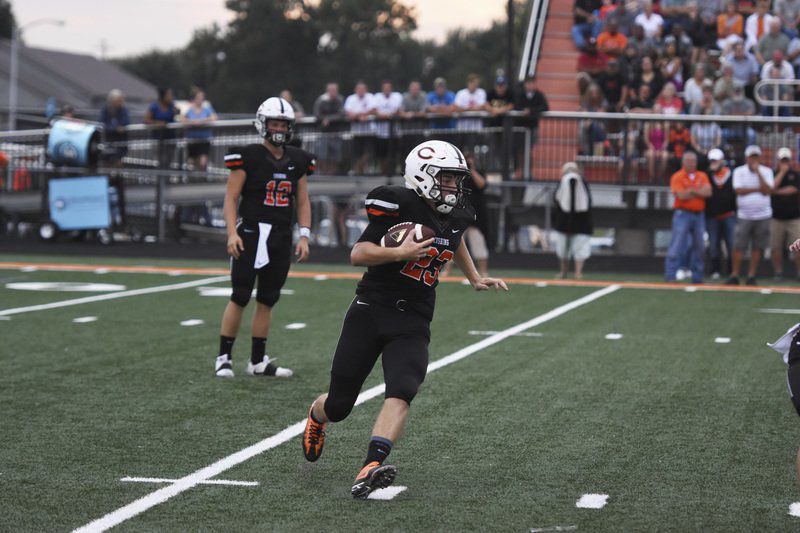 Jordan Bishop/Stillwater News Press Oklahoma State walk-on Trevor Ailey, a Cushing High graduate, plays for the Cowboys' scout team defense at the safety position. Ailey hopes to inspire other kids at mid-size to smaller high schools to not limit themselves.

Jordan Bishop/Stillwater News Press Cushing High graduate Trevor Ailey recently walked on to the Oklahoma State football team. Despite having no interest outside of Div. II schools, Ailey always knew he could make it at OSU.

Jordan Bishop/Stillwater News Press Oklahoma State walk-on Trevor Ailey, a Cushing High graduate, plays for the Cowboys' scout team defense at the safety position. Ailey hopes to inspire other kids at mid-size to smaller high schools to not limit themselves.

Trevor Ailey walked into the Oklahoma State football locker room wearing a shirt with a donut on it and pink shorts.

As he stood in awe, a childhood hero in Dillon Stoner walked by, with Biletnikoff Award finalist Tylan Wallace right behind him. Ailey, a Cushing High graduate, couldn’t believe it. But, even in his “goofy outfit,” he knew he belonged.

Ailey had just been told that morning he had made the Cowboys as a walk-on, a dream he had since he was in kindergarten. The day before, he had attended a tryout after working all summer to be ready for it and less than 24 hours later, he was preparing for his first practice.

“I didn’t even have time get changed so I wore what I had worn to go to school so I walked into that locker room with all those boys and I was wearing pink shorts and a donut shirt. I was tickled to death,” Ailey said.

Throughout the summer, Ailey had worked every single day when the sun was at its highest point so he knew he would be ready no matter what. Despite not hearing from Mike Groce, OSU’s director of football recruiting, until right before the tryout was scheduled to take place, Ailey never lost faith.

“He said, ‘We have 120 guys. We don’t need to take any of you if we don’t want to. If you prove to us you can play ball, then we will take you,’” Ailey said. “I went to that tryout and thought that I did a really good job.”

In high school, Ailey was part of the resurgence of Tiger football, playing a huge part in the program’s ascension to the elite of Class 3A and eventual promotion to 4A.

As a running back, he came on in his sophomore year, making the most of whatever time he got, including an all-time performance against Idabel in a playoff game as he dealt with strep throat on one of the coldest nights in recent memory.

That year, the Tigers fell short of the state championship, losing to Plainview in the semifinals, but Ailey had made his mark.

For years, like his dream of making the Cowboy football team, he had been told he wasn’t one of the best, not even good enough to crack the starting 11. His perseverance shined through and in his junior and senior years with the Tigers, he was one of the best players in the area.

Last season, despite being the lone senior on the field most times, he played offense and defense, notching at least one play at nine different positions as Cushing kept a playoff streak alive in its first year back in Class 4A.

Ailey’s play was noticed, as he drew interest from Pittsburg State, Northeastern Oklahoma A&M, Oklahoma Baptist, Southern Nazarene and Emporia State, but he wanted to go to OSU. Even though his high school coach, Rusty Morgan, and principal Mike Wayland wanted Ailey to go somewhere on scholarship, he knew he was good enough to make it at the Division I level.

“At the end of the day, I told coach it was my dream,” Ailey said. “A lot of people looked at me like I was crazy because I was taking a huge risk and a huge gamble. I told my coaches they would see me in pads again. I am a zero star, no stars at all and you walk in here playing with three-star guys and better. I didn’t play at a 6A school, I was at 4A. One senior stepped on the field my senior year and that was me. It was rough.”

After Ailey finished playing basketball for coach Jontue Ezell, he started working toward that dream. He got into contact with Cole McKnight, a fellow Tiger who had also made the journey from O’Dell Field to Boone Pickens Stadium. McKnight, who finished his Cowboy career in 2017, told him how to get ready for the tryouts.

Ailey could only bench press 225 pounds twice when he started preparing, by the end of the summer, he did 11 reps. He maxed out at 305 pounds. Knowing he was going to make the team one way or another, he enrolled at OSU. When he got the call from Groce telling him when tryouts were, Ailey knew he could do it.

“We did a vertical, a bench, a shuttle, then we ran 40s, and I had an individual session with the (defensive backs). We tried to cover them. We just had to cover them. I covered really well that day,” Ailey said. “The coaches got my number after that and I felt confident, but I didn’t know it was going to be that soon the next day. It was hot, 120 degrees is what it felt like. … I was having fun. People forget how fun football is and what the game offers.”

Ailey had went into the tryout looking at becoming a slot receiver, but the OSU coaches saw an eye for his defensive skills and moved him to safety. Ailey felt confident he would get a call.

The next day, while in his “goofy outfit,” he got a text from Groce saying to meet in his office after class.

It was vindication for Ailey, who turned down a guaranteed Div. II life for the risk, but now every day he is suiting up with the Cowboys.

“I hated whenever as a kid, you would write down that your dream was to go to the NFL and they would say, ‘You need to think of a more realistic dream,’ Ailey said. “If a kid tells me their dream, I am going to encourage them. You can do anything you set your mind to.”

Now, when Ailey goes back to Cushing, he is flooded by little kids for autographs and selfies. Even though he is just a walk-on and has a long way to go to be a member of the traveling team, he knows it is possible.

“I am not satisfied with just making it because I know I can play ball,” Ailey said. “I am not saying I am going to do it this year or next year, it might be a redshirt senior year, but someday I am going to play ball for OSU.”

He has a hero he looks up to that he gets to see every day, as well, in redshirt senior linebacker Philip Redwine-Bryant. A former walk-on himself, Redwine-Bryant earned a scholarship this offseason and has taken to helping out the new guys like Ailey.

“He didn’t even know me, but he started talking to me,” Ailey said. “He asked if I was the Cushing kid and he said, ‘I heard about you.’ He is awesome and is in that locker room every day. He has a smile and says good morning and is always so great. He is my favorite person in that locker room. It is guys like that that I look up to who pay their dues and do what is best for the team.”

In practice, Ailey goes against the starting wide receivers as part of the scout team. He will occasionally see his position coach Dan Hammerschmidt and starters like Kolby Harvell-Peel, but right now, he knows he has to work himself up and he enjoys it.

Off the field, he is looking to get a business management degree. He wants to head to the NFL, but afterward, he would love to use his education to have a good life and teach his kids they can do whatever they set their mind to, as well.

Ailey has persevered to prove not only to himself he could achieve his dream, but also to kids in towns like Cushing that where you grew up doesn’t mean you have to limit yourself.

“I had a lot of people tell me I couldn’t do this. Most people say they think you can make it, but you know deep down in the back of their mind, they think you don’t have a chance,” Ailey said. “I proved them wrong. What I have learned about life, no matter how far you get or what you achieve, you will always have doubters. It is always going to be something. You just have to blank it out, ignore it and go be you. At the end of the day, I have little kids looking up to me and chasing their dreams. I am going to chase my dreams.”