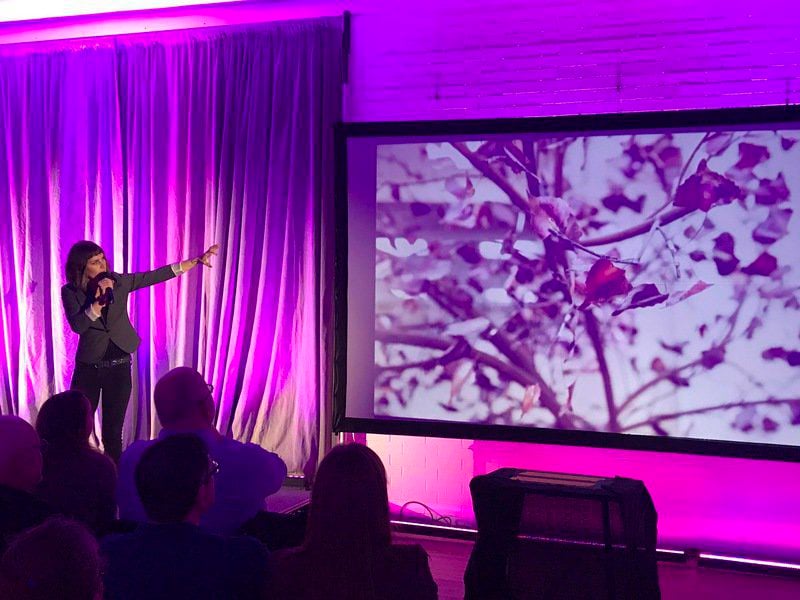 Jordan Bishop/Stillwater News Press Wyoming native Betsy Bower, a metal worker, shows one of her art installations on Pecha Kucha Night on Tuesday. It took her 400 hours to make. 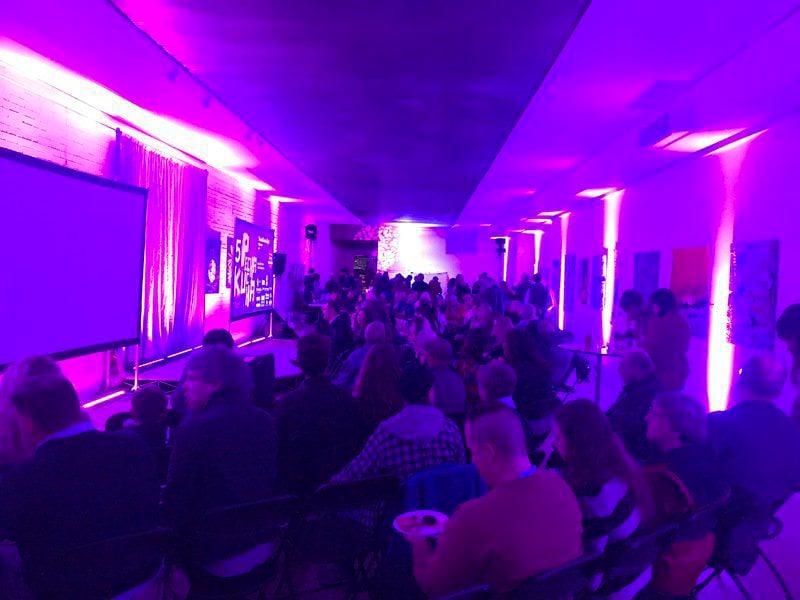 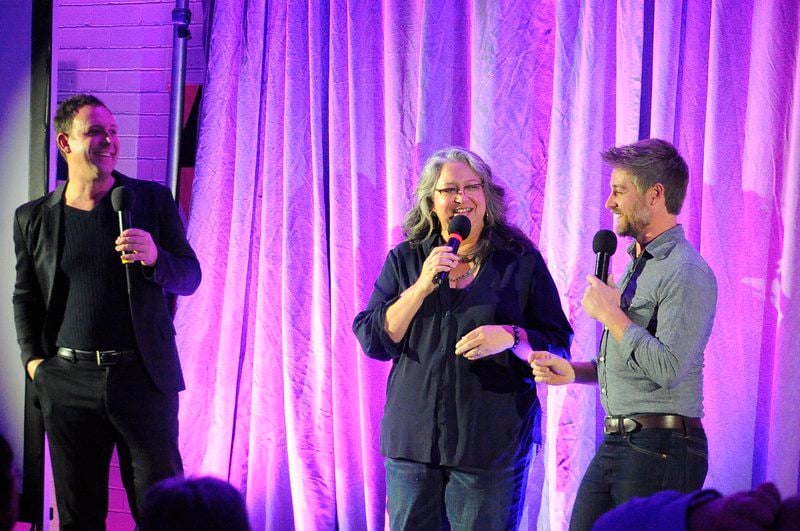 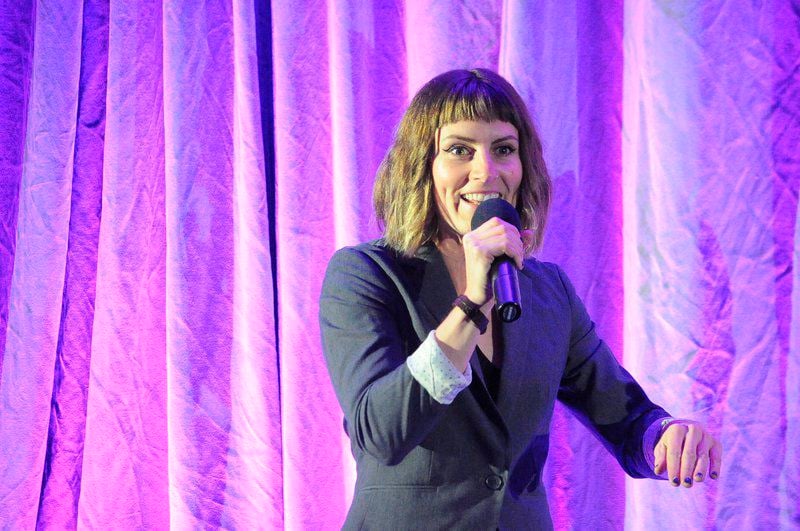 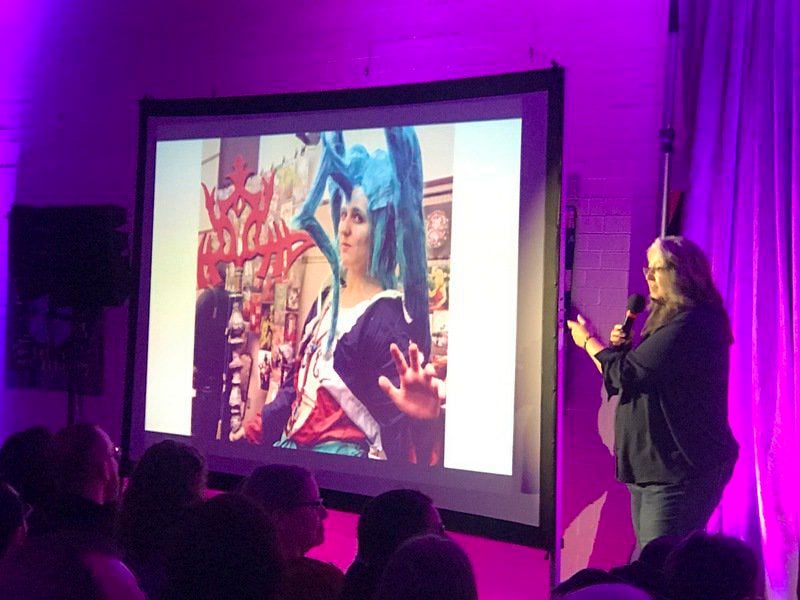 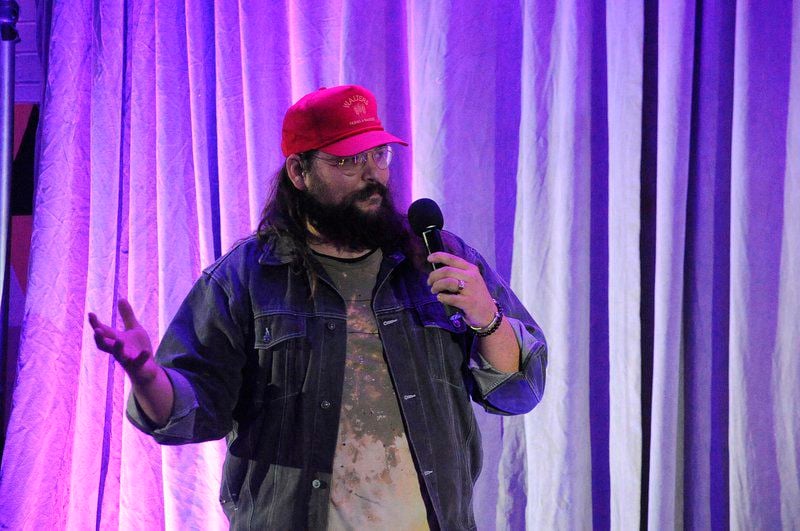 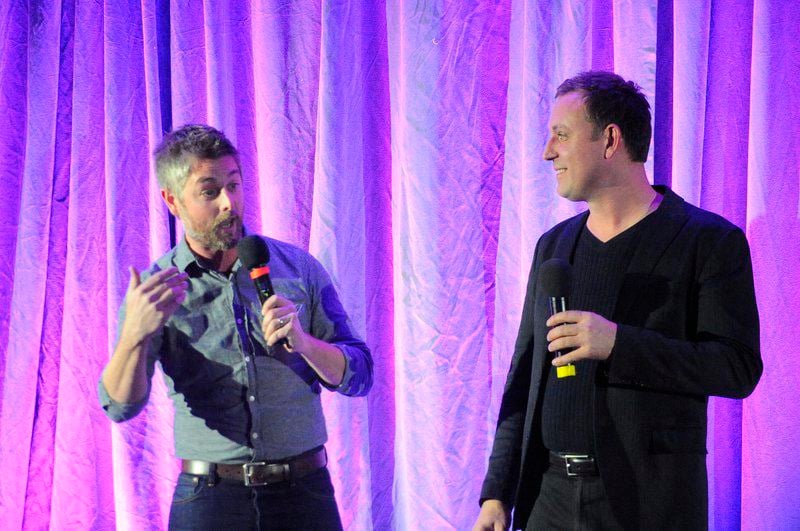 Jordan Bishop/Stillwater News Press Wyoming native Betsy Bower, a metal worker, shows one of her art installations on Pecha Kucha Night on Tuesday. It took her 400 hours to make.

In less than seven minutes, someone can learn all about another profession or hobby along with all passion that comes with it.

Pecha Kucha nights offers that around the world to anybody willing to attend, such as the full house at Stillwater’s Modella Art Gallery on Tuesday night. It was the fifth volume of Pecha Kucha in Stillwater, with more and more attendees coming every time.

Pecha Kucha, which is Japanese for “chit chat,” is sort of like a streamlined “Show and Tell,” with presenters given 20 slides and 20 seconds to explain each slide.

Local sculptor Morgan Robinson is the organizer for Stillwater and he started the night by thanking attendees for the event going so well in the past while also looking toward the future.

“I am an artist here out of Stillwater and it was a format that helped me get in the door in Tokyo and actually connected me to some other people,” Robinson said. “It has really helped artists connect with artists and people in the business. You get to know someone very quickly.”

His co-host for the night was Bobby Wintle, the well-known co-owner of District Bicycles, who drew a large applause when he took the stage. Wintle said Pecha Kucha is one of the things that makes him hopeful for Stillwater’s downtown growth.

“I believe that vibrancy and progression is more than a mindset than it is an actual fact and tangible thing we can look at,” Wintle said. “Right now, in your seat, in this moment, you are a part of something vibrant and progressive and it is happening on a Tuesday night in December in Stillwater, Oklahoma.”

Eight presenters were scheduled to talk Tuesday night, but Robinson explained Prairie Wolf Distillery out of Guthrie couldn’t have anyone attend due to unforeseen events so the event went on with seven, starting with Wyoming native Betsy Bower.

Bower grew up in Casper and was the daughter of a welder. The third of sixth children, she explained she initially didn’t want to be a part of the family business, but her heart brought her back to welding and metal working again and again.

“I wanted to do my own thing,” Bower said. “Then I moved to San Francisco for a little bit and thought, I really miss welding. I wish I had my own anvil and forge and power hammer. Every time I would leave it, I missed it. I tried every job, but I really love working with metal.”

Bower said she started welding when she was 12 and always was curious about other people’s work, such as when she went to Burning Man in 2009.

“I was so blown away by the people and the sculptures there who made the impossible real,” Bower said.

Bower, who also goes by Betsy Inferno, brought up she also has been in a circus as an aerial burlesque performer and will get to continue doing that hobby at air gyms in Denver, her new home.

Next up was News Press City Editor Michelle Charles, who discussed her life and also the ever changing days of being in newspaper work. Charles, who has worked for 15 years in the industry, started out for the Perkins Journal before coming to the News Press six years ago.

“I get to document the people in our community living their lives and being theirselves for whoever they might be on that day,” Charles said. “I get to document moments of joy and triumph, great things like that. Sometimes, just living is an act of courage and I get to meet really courageous people.”

When asked by Robinson her thoughts on how Stillwater will look in the future with so many new things on the horizon, Charles was hopeful that the city will continue to grow.

“I see a lot of energy in this town. I see a lot of desire,” Charles said. “I guess the question Stillwater is asking itself is, ‘What do we want to be when we grow up?’ I think there is a sense that we are right on the cusp. I do feel like we are on the cusp of deciding what we want to be and maybe getting past that 50,000 mark in the next census.”

Logan Filkins, an Oklahoma City based fabricator, closed out the first half of the night as he talked about his business, Basik.

“We do modern, minimalist, industrial metal, wood and glass fabrication,” Filkins said. “The reason that I went with Basik is that is really stood to me for what makes a building timeless, the simplicity and clean lines. … One of the things we are most well known for is railings. That kind of became our bread and butter to some extent.”

Filkins discussed the different jobs he and his small crew have been given and showed off some of his favorite work. He said he loves getting to have his own business, now, after years of working his way up.

“I have been doing fabrication essentially for my whole life,” Filkins said. “Everything was about the timeline, though, and I never felt respected as a craftsman, that is why I put a lot of care and effort into my guys.”

The night then took an intermission before coming back where electrical engineer Fernando Pires, artist Eric Cameron, sculptor and professor Jessica Teckemeyer and landscape architect Clark Bockhahn all presented.

Attendees Joe and Margaret Hrencher said they have really enjoyed Pecha Kucha coming to Stillwater and getting to learn about all types of professions.

“It brings community people together and they are so informative,” Margaret Hrencher said. “So many talented artists and people that have so many points of view about art and sculpture. It is just awesome.”

“There are a lot of different people in the world and it is kind of nice to meet some of them,” he said.