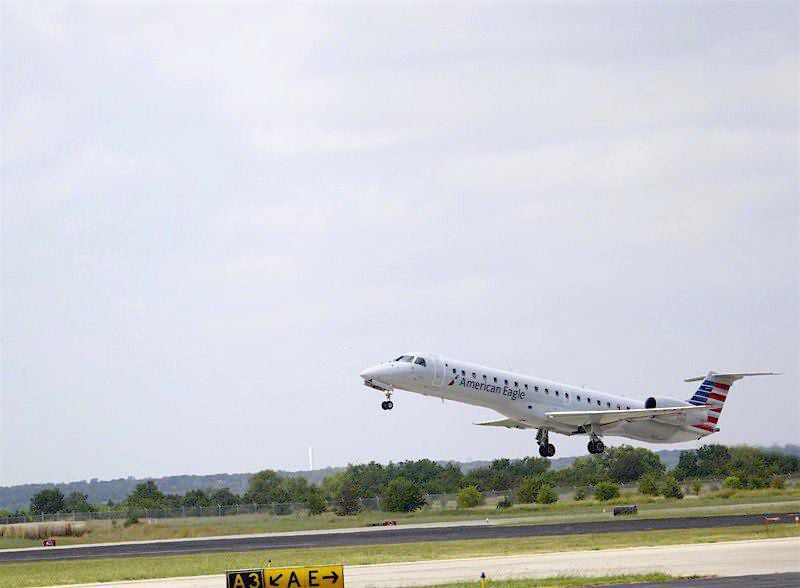 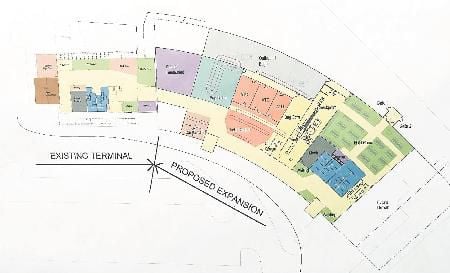 Although Stillwater Regional Airport looks much different now that it’s been reconfigured to accommodate commercial passenger air service, more changes could come in the future.

This drawing depicts a potential future terminal expansion that would add a second gate, dedicated areas for car rentals and potentially, a restaurant.

The expansion depends on the financial health of the airline serving Stillwater and the need for more space.

Although Stillwater Regional Airport looks much different now that it’s been reconfigured to accommodate commercial passenger air service, more changes could come in the future.

This drawing depicts a potential future terminal expansion that would add a second gate, dedicated areas for car rentals and potentially, a restaurant.

The expansion depends on the financial health of the airline serving Stillwater and the need for more space.

Stillwater is served by Envoy Air, one of nine regional carriers operating as American Eagle under a service agreement with American Airlines.

Stillwater City Manager Norman McNickle told the City Council Monday night that, beginning Friday, there will be one flight daily into and out of Stillwater. The plane will arrive at 1:30 p.m. and depart for Dallas/Fort Worth International Airport at 2  p.m.

This single mid-day flight will replace two daily flights, morning and evening, between Stillwater and DFW.

McNickle said the decision was made because fewer people are traveling due to the COVID-19 pandemic and the airline industry as a whole is struggling to survive.

The list of airlines around the world that are seeking bankruptcy protection is growing rapidly in spite of $58 billion in federal aid that was approved in April.

Business Insider reported on May 12 that the International Air Transport Association was projecting the industry would lose at least $314 billion due to the coronavirus outbreak.

McNickle told Mayor Will Joyce and councilors Amy Dzialowski and Alane Zannotti that the number of flyers plummeted early in the pandemic but had started to come back. However, over the past month the percentage of filled seats, known in the industry as "load factor" plummeted again.

American Airlines also announced it would be cutting flights into its Chicago hub by 50%, he said.

Airport Director Paul Priegel told the News Press flights at Stillwater Regional Airport had been cut to once a day this spring due to the COVID-19 shutdown but had returned to twice a day on July 7.

"Airlines are being hit super hard right now with only about 25% of the passengers flying, compared to the same time last year," Priegel said.

Overall, the news could have been worse for Stillwater.

"The good news is, we still have a flight," McNickle said. "There are a lot of places served by regional airlines that have completely lost service."

Completely losing commercial air service would be a blow to the community, which views it as a factor in economic development and recruitment.

Stillwater's former airport director Gary Johnson invested years in the effort to get commercial air service in Stillwater, working with the Federal Aviation Administration on grants to fund improvements to the facility, lobbying with the help of city and state leaders, along with Oklahoma State University, and courting airlines.

That effort finally yielded a deal with American Airlines that culminated in the inaugural commercial flight from Stillwater Regional Airport to DFW in August 2016.

Stillwater's commercial air service has been seen as a success. The airport celebrated its 100,000th passenger less than two years after that first flight.

Priegel has continued to seek funding and make improvements to the airport, with an eye toward expanding the terminal to provide more amenities and space for more flights.

An FAA-funded project to rebuild the runway apron and provide more space for the current commercial operation is already underway.

The announced flight schedule change will not affect that project, McNickle said. Plans to expand the terminal will have to be examined long-term with the financial health and needs of the air service partner in mind.

McNickle said he assumes American Airlines is contacting travelers who  booked flights that have now been canceled due to the schedule change.

With the uncertainty surrounding the airline industry, Forbes magazine is recommending that travelers who use airlines that seem to be teetering on the edge of bankruptcy keep records of their rewards points, consider using them to book tickets with cash value, take out travel insurance that covers bankruptcy and look to their credit card companies for charge backs or refunds.

Officials in Stillwater hope it doesn't come to that.

"If we want to continue that service we would truly encourage people, if they've got a DFW trip, to continue to book that flight. And we just ask our citizens to consider that when they're traveling," McNickle said.