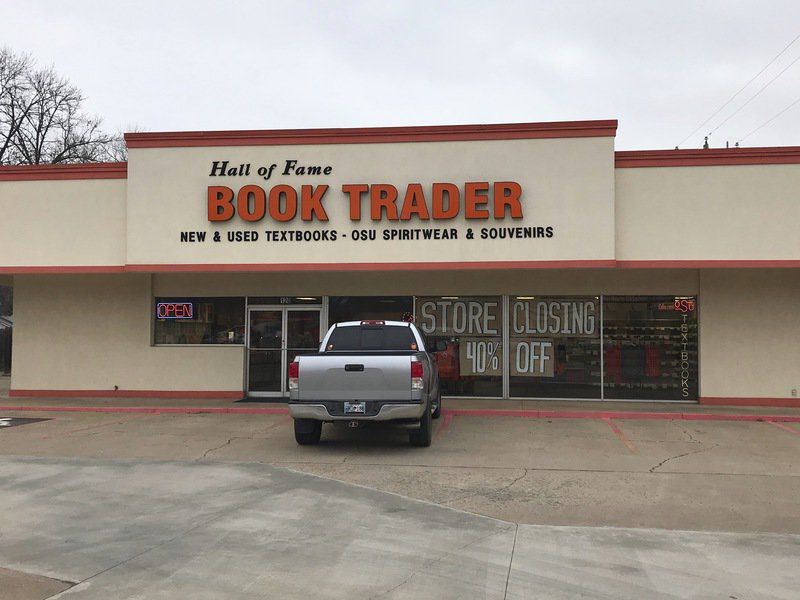 Jordan Bishop/Stillwater News Press Hall of Fame Book Trader, a textbook store at 120 W. Hall of Fame Ave. in Stillwater, is closing in a few weeks after more than 20 years of service. 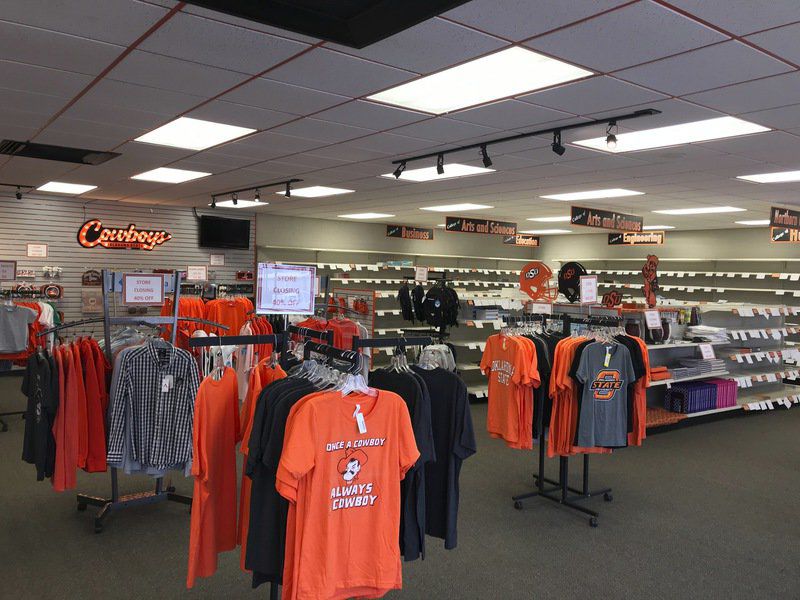 Jordan Bishop/Stillwater News Press The inside of Hall of Fame Book Trader, a textbook store at 120 W. Hall of Fame Ave. in Stillwater, which is closing after more than 20 years of service.

Jordan Bishop/Stillwater News Press Hall of Fame Book Trader, a textbook store at 120 W. Hall of Fame Ave. in Stillwater, is closing in a few weeks after more than 20 years of service.

Jordan Bishop/Stillwater News Press The inside of Hall of Fame Book Trader, a textbook store at 120 W. Hall of Fame Ave. in Stillwater, which is closing after more than 20 years of service.

Jeff Nett looks around his store at the slowly emptying shelves, remembering when he had to cram books in the buildings out back just to have enough in stock.

The good old days of textbook stores are in the past as Stillwater’s Hall of Fame Book Trader is now having to close its doors after years of diminishing profits. Nett, who opened the store in July 1999, was told even back then that the time was coming for brick-and-morter bookshops. For 20 years, he defied his doubters, though.

“The whole market has changed the textbook business so much that it had to end at some point,” Nett said. “Really 20 years ago when we opened, a lot of people told me I was crazy. Technology was taking over at that point and they said, it wasn’t going to work. I always thought it would and it did. It took off so quickly because Stillwater needed another bookstore, OSU needed another bookstore.”

For years, Hall of Fame Book Trader was doing well, peaking in profits in 2014 before plateauing and then decreasing every year since.

While most look toward online sales as a main reason for the death of textbook stores a la how video stores like Blockbuster got pushed out by streaming services, Nett said it was really the book publishers that have put him out of business.

Since a Department of Education regulation in 2015 included a section stating institutions could include the costs of books and supplies as part of tuition as long as the university has an arrangement with the publisher to make the books at below market rates, most schools have been using “inclusive access.”

Instead of assigning individual books, now institutions are including them as part of the tuition, basically cutting out the middleman.

“Just about every freshman book like basic English, basic history, basic everything is all what they call ‘inclusive access,’” Nett said.

Nett said back in the day, publishers tried to get rid of the used market by including CDs inside the book, but students never really used them or cared about getting them, so the used market still thrived.

For Oklahoma State apparel and other items, that is where Nett said online competition, as well as just in-town competition, started to really hurt. He said especially after Nike limited who could sell the officially licensed equipment is when the retail side at Hall of Fame Book Trader really started to struggle.

“It is a tough business, the OSU business,” Nett said. “Retail is tough and everyone buys everything online now. Our best year was 2011. That was partly because the football team was so good but until then, we were gradually going this way and now we are continually going the other way. There is a lot of people doing this in town now with Academy, the university store who have big sales every now and then, of course you have Chris’ (University Spirit), Dupree’s, the Endzone and Eskimo Joe’s. The OSU business was a great sideline for us, but we were always a textbook store.”

The store is planning on closing in three or four weeks, with everything in the store 40 percent off as of now. Nett said it was a decision he has known for a long time.

“We have been starting to go the wrong way and knew pretty well for a couple of years that we probably weren’t going to be able to recover enough to keep making money,” Nett said. “We have known for quite a while that we were going to have to close. We wanted to get through the football season and the little bit of what we do have at the beginning of school, what we used to call the ‘book rush.’”

Nett bought the building at 120 W Hall of Fame Ave. to go with the two buildings behind it he already owned. He had been in the textbook business beforehand, managing Cowboy Book for 11 years before going into the lumber business for seven years.

After opening Hall of Fame Book Trader, the store surpassed Cowboy Book within a few years, which Nett attributed to Cowboy Book being owned by a corporation at the time that set certain prices whereas his business could do its own thing.

After Cowboy Book closed, Nett even tried to buy it, but it eventually became The Garage restaurant, which it is now.

As for what Nett will do, he said he isn’t looking to sell the building. He might lease it out or build something else because it is such a prime location. Until then, he will look back on 20 years of a Stillwater staple and think of the good times.

“There were lots of good times. The whole thing is a great memory,” Nett said. “We have been reminiscing with our kids and everything. They were little bitty out there playing in the yard in their cheerleader suits and now they are graduated adults.

“It has been a great run, lots of great employees. We did real well for a little while. I’ve got no complaints. I wished it wouldn’t have ended the way it ended, but I have no complaints.”