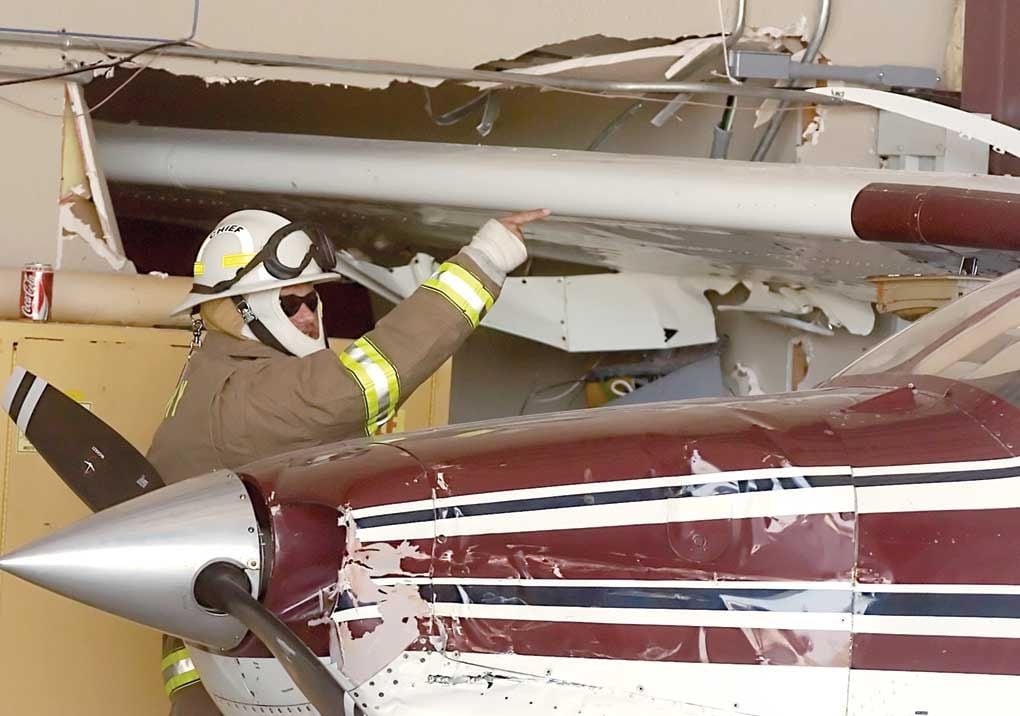 Perry Fire Chief Paul Hinchey directs a tow truck Friday as it dislodges an airplane’s wing from the wall of a hangar at the Perry Municipal Airport. The Cessna Skymaster’s wings were filled with fuel and narrowly missed several electric conduits and a breaker box. 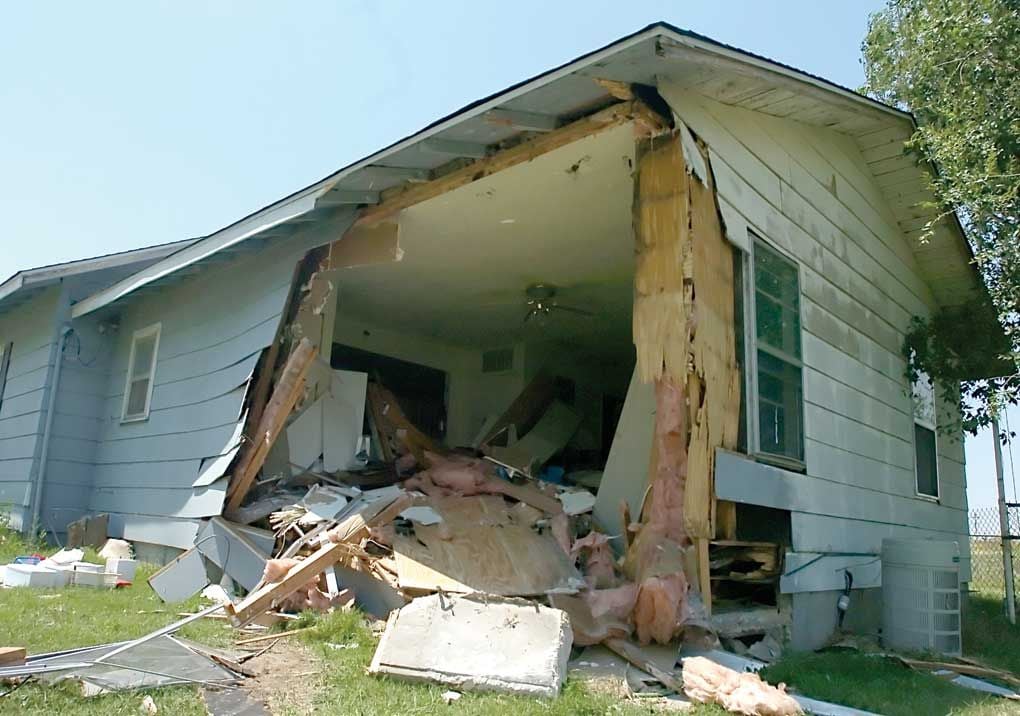 Perry Fire Chief Paul Hinchey directs a tow truck Friday as it dislodges an airplane’s wing from the wall of a hangar at the Perry Municipal Airport. The Cessna Skymaster’s wings were filled with fuel and narrowly missed several electric conduits and a breaker box.

One man is dead and another is in critical condition after a police pursuit ended in a collision early Friday on the Cimarron Turnpike west of state Highway 18 in Pawnee County. Brandon Cliff Shearer, 25, of Oklahoma City was pronounced dead at the scene after the stolen car he was driving collided with a car driven by Robert David Fisher, 35, of Cleveland, according to the Oklahoma Highway Patrol. Chief Mike Thomas of the Perry Police Department said Friday afternoon that Fisher was in surgery at St. John’s Hospital in Tulsa after sustaining head, arm, leg and internal and external injuries. The 33-mile chase started at Perry Municipal Airport when a call came in to Perry Police at 3 a.m. that someone had rammed the gate at the airport with a fire truck. Thomas said Shearer originally went onto the airport property, broke into the airport office through a window and stole some food. Shearer opened the doors to one of the hangars, entered one of the trucks and started to ram the vehicle into airplanes, Thomas said, adding the planes were rammed into the airport office wall. Shearer then proceeded to aim the truck at the Eagle Med Flight offices where firefighters stay, barely missing an occupant who was inside, Thomas said. Perry Police arrived as Shearer exited the truck and entered a 1998 Ford Expedition, with which he tried to hit the Perry Police vehicles as he made his way for the turnpike. Thomas said Shearer tried to hit oncoming tractor trailers as he was eastbound in the westbound lane. After looking at the police videotape of the chase, Thomas said Shearer passed and nearly hit 12 to 14 cars. The Pawnee County Sheriff’s Department put stopsticks ahead of Shearer east of the McDonald’s on the turnpike, which impacted the vehicle. On the video, Thomas said, it didn’t look like the car Shearer was driving swerved into the opposite lane after hitting the stopsticks, adding that Fisher’s car was in the inner-most westbound lane. According to the OHP report, Shearer was ejected through the windshield after impact and was thrown 100 feet. Both vehicles caught fire. Fisher was removed from his vehicle and airlifted to the Tulsa hospital. The Perry P.D. is still investigating the incident, citing it as a malicious injury to city property and stolen vehicle, Thomas said. The estimated structural and aircraft damage to the airport is $500,000. The motive is unclear, Thomas said, adding the police department doesn’t know why Shearer was even in Perry. Perry Police are waiting on the medical examiner’s report, including a standard blood test, for further details, Thomas said.

Jerry Horn, 83, passed away September 22, 2021. A Celebration of Life will be 9:30 a.m. on Wednesday, September 29, 2021 at Highland Park United Methodist Church, 524 North Stallard, Stillwater. Under the direction of Strode Funeral Home.