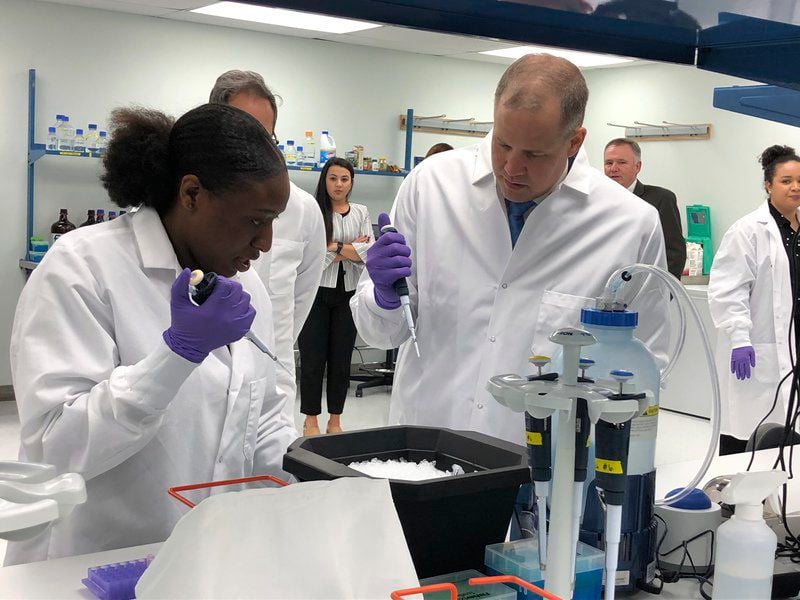 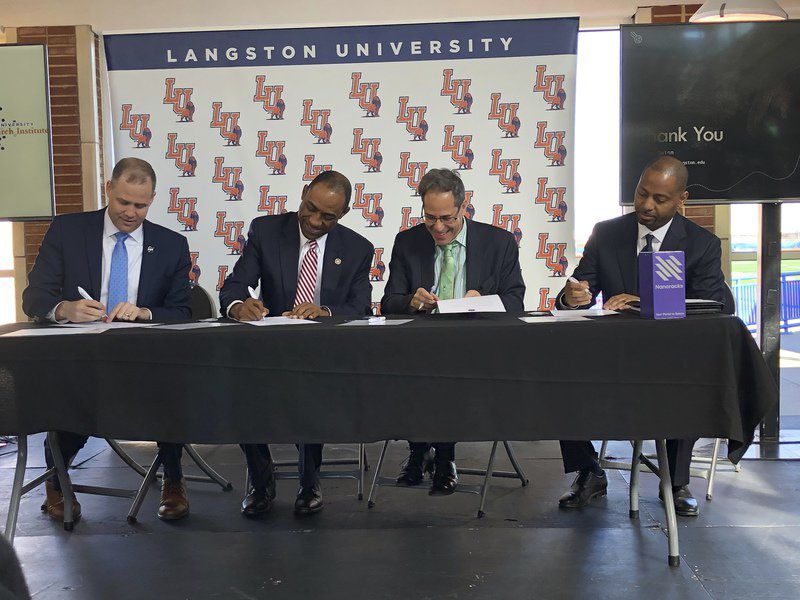 LANGSTON – A nearby university can now count itself as one of the partners of the National Aeronautics and Space Administration on its mission as a leader toward eventually landing humans on Mars.

The Langston School of Arts and Sciences was selected recently for a $4.9 million grant from NASA that allowed the university to establish the Langston University NASA Advanced Research in Biology Center.

A ceremony was held at Langston on Thursday that included a payload signing ceremony. A payload is what is taken to the International Space Station. Research done at Langston will be included in a payload sent to the ISS to help further understand space and its effects on the human body.

Langston is one of the latest universities to partner with NASA through an organization called Dream Up, which partners with universities and high schools to bring space-based education and research to as many students as possible.

Through Dream Up, students have been able to complete student projects that are utilized on the International Space Station. The organization’s goal is to help prepare students for the future of space-related industries. These industries include commercial space flight, as well as cargo transportation between Earth and as many as a dozen space stations in the planet’s orbit.

With sites set on a future among the stars, there is much to learn about how life would be sustained for long periods of time either on the moon or the prospective seven-month journey to Mars.

Langston students and staff are now at work researching countermeasures for when an astronaut’s immune system becomes degraded. The research involves medicinal plant extracts, which Dr. Byron Quinn, chairperson of the LU Biology Department, said it is basically rotating cells and creating an environment around the cells that mimics microgravity.

In the simulated microgravity, the effects of the medicinal plant extracts on the cells – with the experiment being designed to reactivate the cells – are studied to learn how it would theoretically work in space. This research will be a part of a payload that could be sent to the International Space Station this year, although a definitive date is not yet known.

Quinn said the research heading to the ISS is the next step in the experimental process for the results of the LU research.

“What’s missing is we don’t know what the effect would be if we were to put these samples on the International Space Station," Quinn said. "Once we go to the International Space Station, we’ll have one sample set that stays fixed, and then we’ll have a control on the ISS that is spinning. This will give us a full experiment to determine whether or not these medicinal plant extracts will reactivate these cells, in this case. We won’t only be studying space flight, but also sustaining human life on the moon, plus Mars, with this setup.”

Jim Bridenstine, NASA’s administrator, a Tulsa native who took office in April 2018, changed his personal schedule to be in person at Langston. Bridenstine said there are many things yet to be understood about space, especially its effects on the human anatomy.

“The human physiology likes to be in the gravity well of Earth. We like to feel that force of gravity,” Bridenstine said. “When we don’t have it, things happen to the human body that we’re still trying to understand. One of the things is that your immune system starts to get degraded. You might have a virus that you’re carrying, but you don’t know you’re carrying it because your immune system is supressing it, sometimes it can creep up (in space).

“Guess what, you don’t want to get sick when you’re on the International Space Station or, even worse, on your way to Mars for the next seven months. You don’t want to get sick during that time because it’s very difficult to get rid of that illness in space. So what we’re doing is creating countermeasures. … How do we figure out how to make sure the immune system doesn’t get degraded? What are the countermeasures we can put in place? And ultimately, what can we do after your immune system is degraded, to get it back? These are all important things we have to learn, that we have to study. So this is very serious research that’s going to enable us as a nation and all of our international partners to do bigger and better things in space.”

There are many other ways in which the research done in space has its benefits. In zero gravity, there are immunizations and pharmaceuticals that can be produced that are not possible to achieve on Earth. It is possible to print 3D human organs in space, but not possible on Earth because the tissue goes flat. There are even artificial retinae that can be produced, which Bridenstine said would make it so “people don’t have to go blind in the future.”

It could be seen as a new era for NASA, as there is now a program in place to set up a situation on the moon to sustain human life for long durations by 2024. The program is titled “Artemis,” which in Greek mythology is the twin sister of Apollo, the namesake of the program that allowed Americans to be the first humans to walk on the moon.

Bridenstine said NASA is no longer purchasing and then owning the rockets sent into space. Now, through a program called Commercial Resupply, NASA is buying a service from a commercial marketplace that is already in existence, which involves companies that can take NASA crews to and from the ISS. Plans are also in the works to commercialize low-Earth orbit.

The ultimate goal of Artemis is to make it to Mars, with the first stop being able to sustain life on the moon for long periods of time. On the moon, Bridenstine said there are hundreds of millions of tons of “water ice” on the south pole of the moon that was discovered in 2009, which is a major target point for NASA.

If the challenge of making life sustainable on the moon is completed, it would serve as a springboard for a future mission to Mars. In the past year and a half, it was discovered that Mars is covered with complex organic compounds, although Bridenstine said no microbial life has been found. There is also liquid water 7 miles under the surface of the red planet.

The Artemis program will also represent the first time NASA has launched U.S. astronauts on U.S. rockets from U.S. soil since 2011, when the space shuttles were retired. Bridenstine said the future of space travel is bright with the help of universities such as Langston.

“The research that will be done here at Langston University is going to have transformational capabilities for space exploration for the United States of America and all of our international partners around the world,” he said.

Although the new Artemis program and Apollo share the namesakes of Greek mythological figures, the current program differs in many ways from its predecessor. Bridenstine said when the next trip is made to the moon, those who walk on it will be a better representation of society in America in this day and age.

“We love the Apollo program. We love it. It changed the direction of humanity,” Bridenstine said.” As much as we love Apollo and how it brought the world together, in the Apollo era, things were very different than they are today. All of our astronauts in that era came from fighter pilot and test pilot backgrounds, and there was not a lot of diversity.

“There were no opportunities for women. Fifty years after Apollo, our nation is different today, and our astronaut core today represents all of America. We have the most diverse astronaut core that we’ve ever had. This time when we go to the moon, we go with people who have not been historically represented in the space program. Now we get to go to the moon with a very diverse, highly qualified astronaut core that includes women and we go under the name of Apollo’s twin sister, Artemis.”