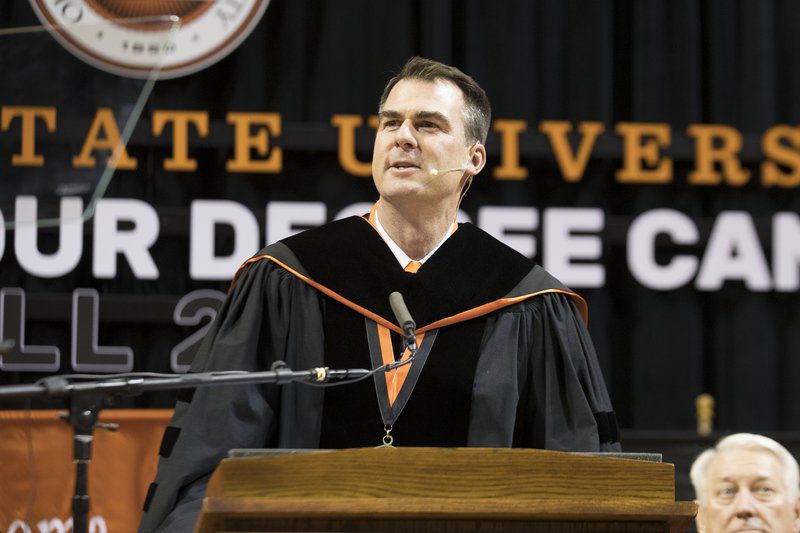 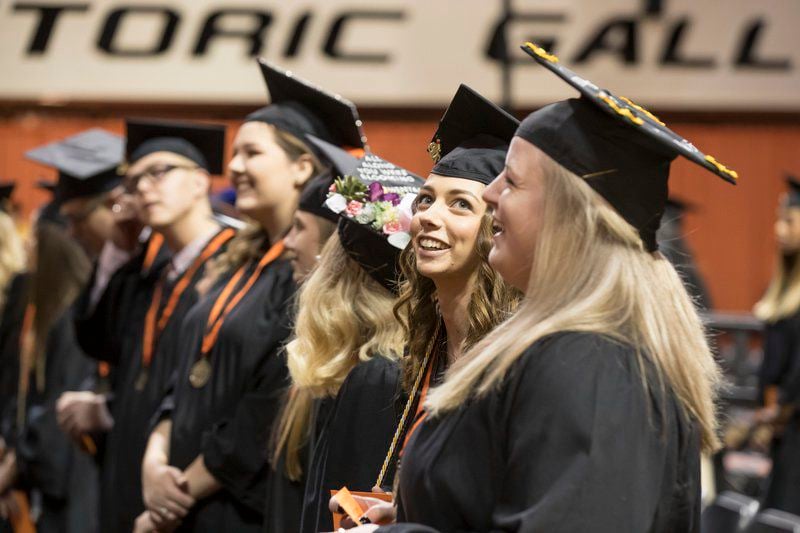 Oklahoma State University recognized the final graduating class of the decade Saturday at Gallagher-Iba Arena during the 140th OSU commencement.

With roughly 1,300 of the 1,800 graduates in attendance during Saturday’s undergraduate ceremonies, Gov. Kevin Stitt delivered his first university commencement addresses at his alma mater.

Stitt spoke following a procession led by the OSU Pipes & Drums Band and an introduction from Oklahoma Agricultural and Mechanical Colleges Board of Regents Chairman Tucker Link, who thanked Stitt for his leadership and dedication to OSU while addressing the gathering of graduates.

“As a graduate, you are a representative of America’s brightest orange. Oklahoma State University has made a difference in your life. May you honor OSU through your continued academic pursuits, your career and your service. Who knows, as a graduate you may even become a (university) president, a regent, or even governor,” Link said, motioning to Stitt.

Stitt, a 1996 OSU accounting alumnus, went on to found Gateway Mortgage Group, which, in 2019, merged with Farmers Exchange Bank to form Gateway First Bank, one of the 10 largest banks in the state. In 2018, Oklahoma elected Stitt as the 28th governor.

Sharing high points from a list of 40 goals he made while attending OSU, Stitt had three pillars of advice for graduates to lean on: Dream big, be persistent and surround yourself with good people.

“Dream big, because you can do anything you set your mind to,” he said. “The great T. Boone Pickens put it this way: What you dream about, what you think about and what you work for is going to happen.”

"Walt Disney said, ‘If you can dream, it, you can do it.’ I am here to tell you that is absolutely true. When I graduated college, I was the son of a Norman pastor and the grandson of a Skiatook dairy farmer whose education ended in the eighth grade."

Stitt said that list of 40 goals he penned in college set in motion a plan he did not fully understand back in 1996, but has carried it with him ever since. He even had it in his pocket on the day he graduated. Stitt said it served as a reminder during challenging times, from starting a business on a shoestring budget, to preserving that business through the Great Recession.

He encouraged graduates to challenge themselves, set high goals and push through obstacles.

“Most people quit right before success,” he said. “I don’t know of any business, job or marriage that doesn’t face challenging times. It’s what you do in those times that matter … Without persistence I would’ve quit (my company) and never hit goal No. 29 – have dinner with the governor of Oklahoma.”

Stitt told graduates their hard work shouldn't end with getting the degree, either, as they should apply the perseverance they have learned over the past few years to their pursuits in their careers.

“Students, you represent only 33 percent of America to graduate with a 4-year degree," Stitt said. "It takes persistence and hard work to get where you are. Today, you are setting a cornerstone for your foundation of a bright future. When you walk out the door, don’t leave the commitment and determination it took to get here.”

“See, what you do matters,” he said. “It matters to your children, your grandchildren. It matters to the state of Oklahoma.”

During the morning ceremony, the board of regents presented Michael and Anne Greenwood honorary doctorates in humane letters for their prolific philanthropic efforts, which have helped transform the OSU-Stillwater campus.

Their lead gifts to projects like The Michael and Anne Greenwood Tennis Center, The Anne Morris Greenwood Reading Room in Edmon Low Library, the new Spears School of Business building and The McKnight Center for the Performing Arts at Oklahoma State University made those projects possible.

In 2018, they pledged a lead gift to name the Michael and Anne Greenwood School of Music. They have also endowed multiple scholarships across campus and are a constant support to the OSU Marching Band and the Cowboy Strong Student Emergency Fund.

“It gives us great pleasure to bestow (these) honorary doctorates of humane letters,” OSU President Burns Hargis said. “It’s very rare that we get to honor a couple like Anne and Mike."

"Her presence on campus positively impacts us all, and after being married to me for 50 years she deserves a medal," President Hargis said.