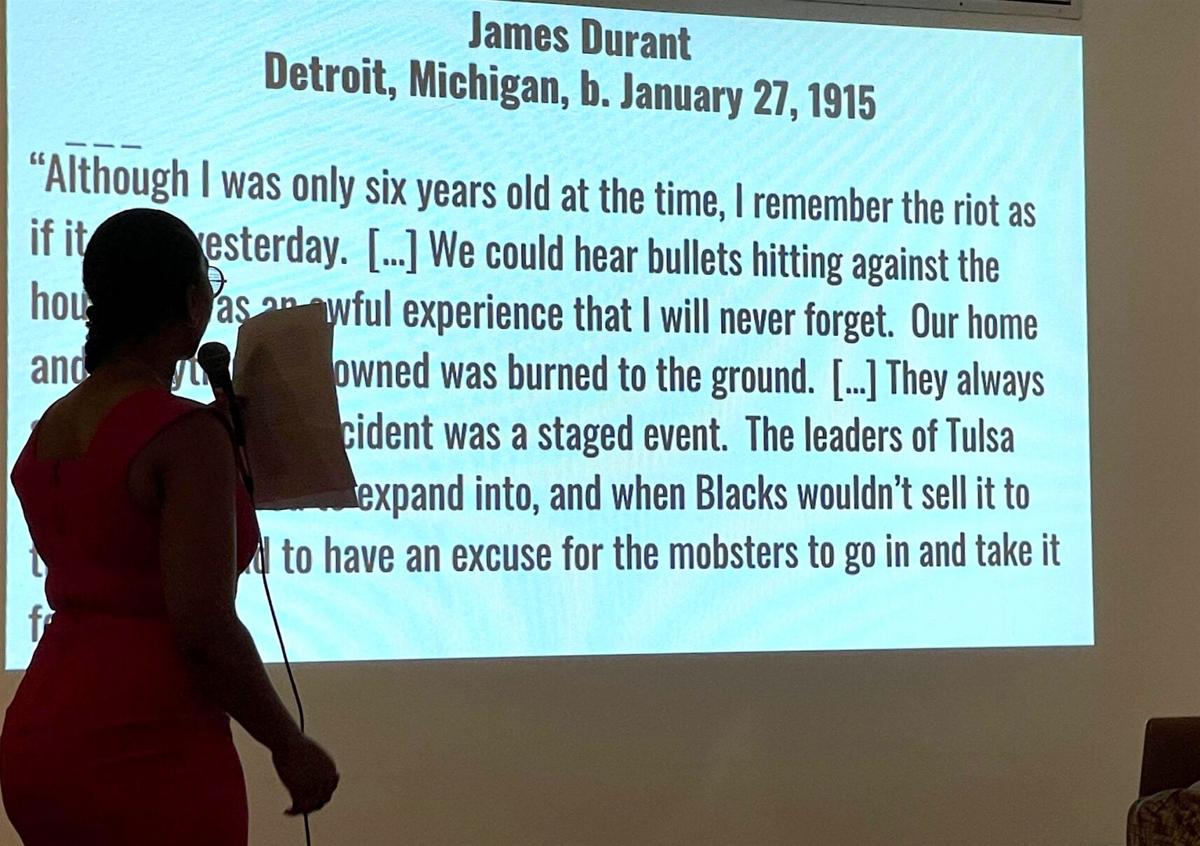 Autumn Brown, a historian, archivist and Oklahoma State University Ph.D candidate, gave a presentation on racial unrest in the early 20th century and the Tulsa Race Massacre, which destroyed an area known as Black Wall Street over the course of two days in 1921. Michelle Charles/Stillwater News Press 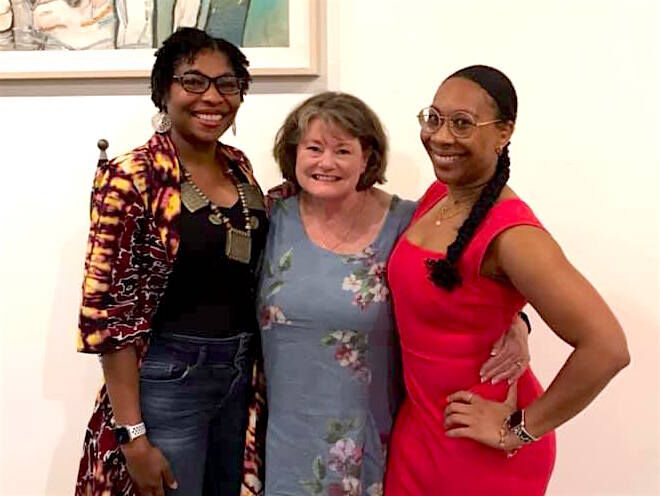 Autumn Brown (far right) is shown with Mahogany Woods (left) and Bonnie Hammond at Modella Art Gallery in Stillwater. Brown was the presenter for the first installment of Modella's Let’s Talk About It dinner series.

Autumn Brown, a historian, archivist and Oklahoma State University Ph.D candidate, gave a presentation on racial unrest in the early 20th century and the Tulsa Race Massacre, which destroyed an area known as Black Wall Street over the course of two days in 1921. Michelle Charles/Stillwater News Press

Autumn Brown (far right) is shown with Mahogany Woods (left) and Bonnie Hammond at Modella Art Gallery in Stillwater. Brown was the presenter for the first installment of Modella's Let’s Talk About It dinner series.

Stillwater residents gathered the week before the 100th anniversary of the Tulsa Race Massacre to learn more about the dark chapter in our state’s history and to better understand its lasting impact.

Oklahoma State University Ph.D. candidate Autumn Brown was the featured speaker for the launch of Modella Art Gallery’s Let’s Talk About It dinner series. She is a historian and archivist who is writing her dissertation on Oklahoma civil rights activist Clara Luper and is working with the Gilcrease Museum to archive a collection of historical research and materials on North Tulsa and the Tulsa Race Massacre compiled by educator, oral historian and author Eddie Faye Gates.

In 2020 the Black Wall Street Times wrote of Gates, “she labored tirelessly to recover the forgotten voices of survivors of the 1921 Tulsa Race Massacre. She preserved her work through photographs, correspondence, handwritten research notes, newspaper and periodical clippings, and a vast collection of audio and video interviews with survivors.”

In an announcement from the Gilcrease Museum, her daughter Dianne Gates Anderson said the collection was entrusted to the Gilcrease because it was important to Gates and her family that the materials be physically located in North Tulsa and be accessible to descendants and the community at large for viewing and research.

The Gilcrease received a $299,710 grant from the Institute of Museum and Library Services to create digital public access to many of the survivor accounts and photographs and serve as a foundation for education, research and exhibition as a service to the community that will live beyond the 100th anniversary of the massacre, the Black Wall Street Times reported. Museum staff also selected 100 oral histories and 600 photos to study, digitize and create resources for teaching trauma-based history in K-12 classrooms.

Brown presented audience at Modella with an overview of racial tensions in the U.S. that built as soldiers returned from World War I, sparking violence and a resurgence of racist organizations like the Ku Klux Klan.

Hostility toward African Americans from white residents who resented competition for jobs and affordable housing was often a factor.

The concept of race was a point of discussion during Brown’s presentation. She shared a personal story of the day an elementary school friend told her they couldn’t play together anymore because they were supposed to play with their “own kind.”

That was the day her mother was forced to explain the concept of race to her, she said.

After being given a few minutes to discuss the idea, most of the audience determined it was simply a social construct.

But it’s a social construct that has led to bloodshed over the history of our nation.

The Tulsa Race Massacre was not the first incident of mass racial violence in the early part of the 20th century and it would not be the last.

A series of events categorized as race riots occurred in Little Rock and Atlanta in 1906, followed by a massacre in Slocum, Texas in 1910. An estimated 6,000 Black residents lost their homes and fled East St. Louis following a week of violence in 1917. Another riot in Lexington, Kentucky the same year involved National Guard troops.

The Red Summer of 1919 was marked by at least 10 race riots across the country, often stemming from economic competition as Black and white soldiers returned to civilian life and looked for jobs.

Homes and businesses were looted then burned by white residents of Tulsa who posed with their takings and photographed bodies. Some of the white attackers had been deputized by law enforcement.

Brown showed examples of postcards printed after the massacre with photos of dead bodies, some charred and lying in burned-out buildings, and lines of Black residents being rounded up and taken to an internment area.

“Who would send or want a postcard like this?” she said, noting that people have the ability to commit actions like that only when they view the victim as less than human.

The stolen property was never recovered and some Greenwood residents were simply never seen again. The search is underway now in areas of Tulsa rumored to contain mass graves containing victims of the massacre.

In spite of the physical and emotional devastation and the lack of insurance reimbursement for the damage done, many residents and business owners in Greenwood did manage to rebuild, but the impact on the community and the loss of generational wealth is incalculable, Brown said.

Federal Urban Renewal policies and the construction of I-244, which isolated Greenwood from downtown Tulsa in 1967, were devastating blows to an already struggling community.

With the construction of Greenwood Rising, a history center that commemorates the legacy of Black Wall Street, before and after the Tulsa Race Massacre, efforts to revitalize Greenwood are underway.

Along with commercial and residential development, there is a movement to reinvent Black Wall Street as a Black Tech Street, a capital of Black innovation and technical entrepreneurship that includes start-ups, entrepreneurs, tech companies, workers, mentors and funding institutions woven together by a culture of collaboration, Tyrance Billngsley II, wrote in the Black Wall Street Times.

“We need to establish systems that will enable every entrepreneur of color to know about and feel comfortable accessing all of the resources in Tulsa’s entrepreneurial ecosystem needed to build out this vision. This can start by first educating our community on the opportunity that the tech industry offers and creates easily accessible entry points into the tech ecosystem already built,” Billingsley wrote.

“Moreover, increasing African American engagement and utilization of Tulsa’s growing ecosystem resources will ensure that the wave of tech-focused development sweeping through our city is used as a catalyst for building a thriving community that we are determined to build.”