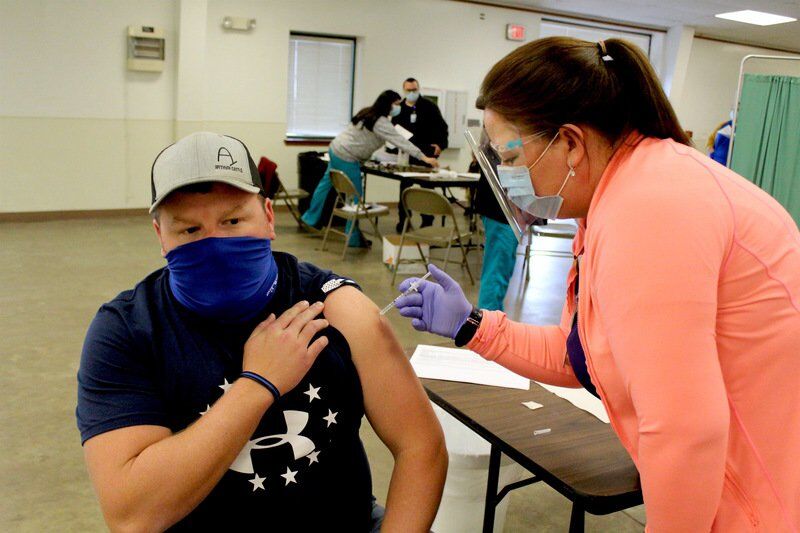 Michelle Charles/Stillwater News Press Ashley Cavett, an RN at the Payne County Health Department, administers the vaccine during a Thursday clinic for first responders at the Expo Center. Additional Point of Delivery Sites for Payne County are expected to be announced this week.

Oklahoma has entered Phase 2 of the state vaccination plan. In Payne County, emergency responders, inpatient and outpatient health providers and people over 65 are currently being scheduled for vaccination. Provided

Michelle Charles/Stillwater News Press Ashley Cavett, an RN at the Payne County Health Department, administers the vaccine during a Thursday clinic for first responders at the Expo Center. Additional Point of Delivery Sites for Payne County are expected to be announced this week.

Oklahoma has entered Phase 2 of the state vaccination plan. In Payne County, emergency responders, inpatient and outpatient health providers and people over 65 are currently being scheduled for vaccination. Provided

People in Payne County who have been anxiously awaiting the arrival of a vaccine for COVID-19 are responding enthusiastically when they get the chance to register for an appointment to be vaccinated.

In spite of having staff standing by to answer calls, the volume of calls flooding the lines at PCHD overwhelmed the department’s switchboard, Kelli Rader, Region 3 Director for the Oklahoma State Department of Health, said. Payne County filled all its available appointments for this week within just a few hours, without online registration.

That level of demand follows the trend across Oklahoma, with state health officials reporting that nearly every dose delivered to Oklahoma has already been spoken for.

The process for getting an appointment should get easier soon. The Oklahoma State Department of Health is developing an online portal for scheduling appointments that Rader said is expected to go live by the end of the week.

That can’t come soon enough for Payne County Emergency Management Director Jeff Kuhn, who told the News Press his phone and the phone lines at county offices have been ringing with calls from people wanting to know when and where they can get vaccinated.

Some of the calls came from people over age 65, who are included in Phase 2 of the state’s vaccination plan. Kuhn said some people are concerned they are missing their chance to get the vaccine and he doesn’t know what to tell them.

Last week, the Payne County Health Department began distributing the Moderna vaccine to people in Phase 2 of the state vaccination plan at what it calls Point of Delivery Sites or PODS.

Although the clinics held at the Payne County Expo Center on Thursday, Monday and Tuesday were advertised as being exclusively for emergency responders and allied health professionals who provide outpatient medical care, some people over age 65 were given appointments.

The Health Department had not announced that people over 65 could register for those PODS.

Doug Valley, 73, of Stillwater, told the News Press he heard through word of mouth that appointments were available to get vaccinated so he called the Payne County Health Department and was one of the lucky ones who got through quickly. He said the phone rang continuously for about two minutes before someone picked up.

He was asked whether he was eligible, whether because of age or because he belonged to one of the other categories. When he told them he qualified based on age, he was given an appointment.

He said the wait was short, the process went smoothly and he left with a card showing he had been vaccinated and with an appointment to return Feb. 1 at the same time for his second dose.

Valley said he has been careful, wearing masks, going into few stores and maintaining physical distance even from friends.

He knows people will still need to exercise precautions but said he is still looking forward to being able to go places and worry less.

Payne County Commissioner Chris Reding told the News Press the county’s Emergency Management Department had been asked to get a head count of county employees who want vaccinations. He said his understanding is that any county employee who interacts with the public would qualify.

Reding said only about one in three of the employees from the Sheriff’s Office and from departments he oversees are interested at this time.

Sheriff Joe Harper, who took office Monday, said COVID-19 vaccinations will be voluntary in his department.

Reding theorized that many of the county’s jailers have already been exposed and developed some immunity. They also tend to be younger and healthier.

Other departments, at least two of which have have had employees with underlying conditions die after contracting COVID-19, might have more people interested in being vaccinated, Reding said.

The Payne County Health Department has advised people to follow its social media accounts for updated information on vaccine availability and appointment scheduling. The department will also be sending that information to local media, Rader said.