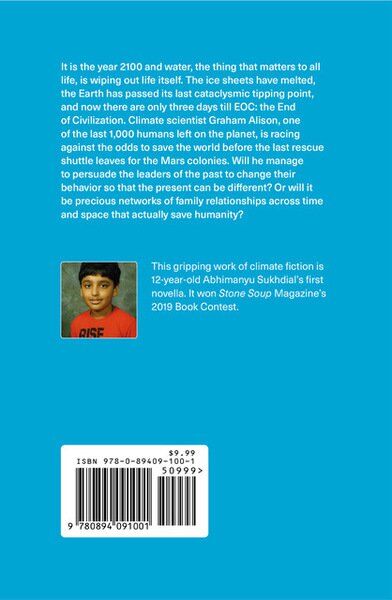 provided. The back cover of "Three Days till EOC" showcases the description of Abhimanyu Sukhdial's fictional novel. 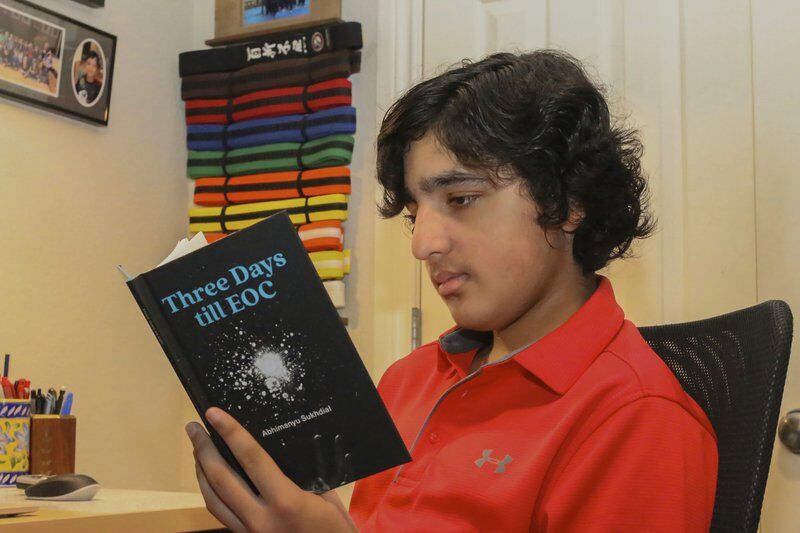 provided. The back cover of "Three Days till EOC" showcases the description of Abhimanyu Sukhdial's fictional novel.

Abhimanyu Sukhdial is 12-years-old and in the seventh grade. He has been a regular contributor to Stone Soup Magazine.

Stone Soup Magazine is written and illustrated by kids who are 8-13 years of age.

When asked if he wanted to be an author when he grows up, he said yes.

"Yes, I’ve always loved reading books and I love the satisfaction of jotting down my stories on paper. For me, nothing beats that satisfaction and happiness," Sukhdial said.

He has written numerous things from video game reviews to movie reviews for Stone Soup Magazine.

“So, when they announced last summer they were going to have their first ever international book contest, I got super excited, and decided to go for it,” Sukhdial said.

Participants could write a collection of poetry, short stories or a book as long as the word count was at least 4000 words long.

Sukhdial’s winning book is a fictional take on climate change. The book is called “Three Days till EOC.”

“My original idea for the book was not about climate change. I wanted to make it like an end-of-the-world disease kind of story ironic, huh,” Sukhdial said. “But after a while, I realized that was too generic and I decided to focus it on climate change because it is happening today in real life, meaning we can relate to it.”

Sukhdial said he has always been interested in global warming, but he wanted his book to still have an “end of the world” feel to it.

“What I most love about writing is developing the idea. Sometimes, I might be playing video games or eating dinner, and I will get an idea. I have a Microsoft Word document on my laptop with just tons and tons of ideas. That’s my favorite part,” Sukhdial said.

Sukhdial had his idea, now all he had to do was compile the ideas into a book.

He spent three months working on his book while he was in India with his grandparents.

“While it may seem complicated, the process of writing a book isn’t that difficult to understand. You just need a lot of patience, an idea, and you’re all set,” Sukhdial said. “That doesn’t mean it’s easy, though. It’s very challenging and requires a lot of writing and revising, and that’s exactly what I did.”

He said he spent many days on his bed revising his book. Through a lot of patience he was able to fully complete his first book.

“Well, I ended up writing about 70 pages, or around 17,000 words! It took a lot of effort, but I won the contest, and that’s how I got my book published,” Sukhdial said.

Sukhdial is proud of the hard work and effort it took to complete his book. He said climate change is real and can be relatable.

To make it interesting, he added in sci-fi elements to make it entertaining to his audience.

“I am proud of the sci-fi elements I put in the story like the PEN (Planet Earth Network) and a time machine. Those were my favorite parts because they felt original and unique to me, and I love incorporating different elements in my stories to make them feel different and unique,” Sukhdial said

Anu Sukhdial said her son started writing in the second grade. Every year, he submitted his writing to the PTA Reflections Program.

“We are really thankful for the wonderful SPS teachers Abhi has had over the years who encouraged him to keep reading and writing, and for creative platforms like the PTA Reflections program and Stone Soup. All these taken together gave Abhi the confidence and perseverance to write and complete his first ever book, Three Days Till EOC,” Anu said.

“Three Days till EOC” can be purchased through Amazon, Barnes and Noble and the online Stone Soup Store.

“I thought we should also support local during these challenging times,” Anu said.

Goldie D. Meyers, 74, died September 22, 2020. Services are pending at this time. Strode Funeral Home and Cremation is in charge of arrangements.

Roger Boorman, 72, died September 21, 2020. Services are pending at this time. Strode Funeral Home and Cremation is in charge of arrangements.

Jane E. LaFleur, 65, died September 21, 2020. Services are pending at this time. Strode Funeral Home and Cremation is in charge of arrangements.