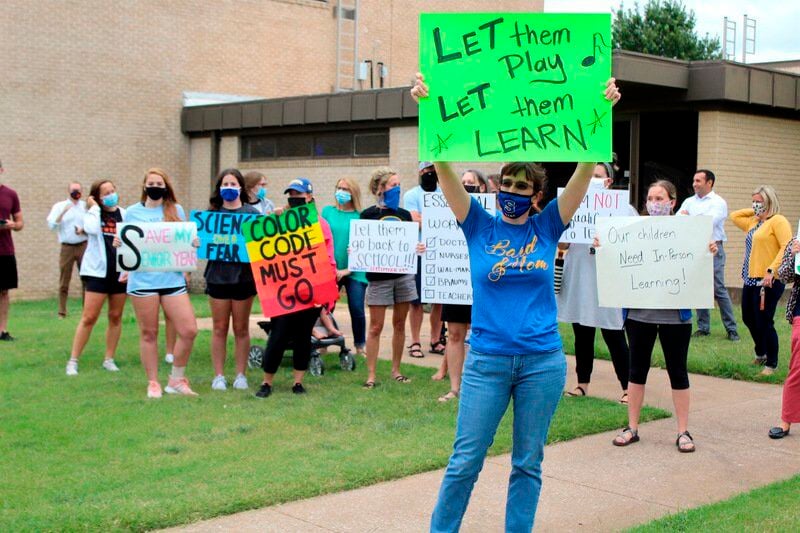 Parents protested outside the Stillwater Board of Education building Tuesday as board members prepared to discuss alternate schedules that could get students back to in-person instruction. Michelle Charles/Stillwater News Press 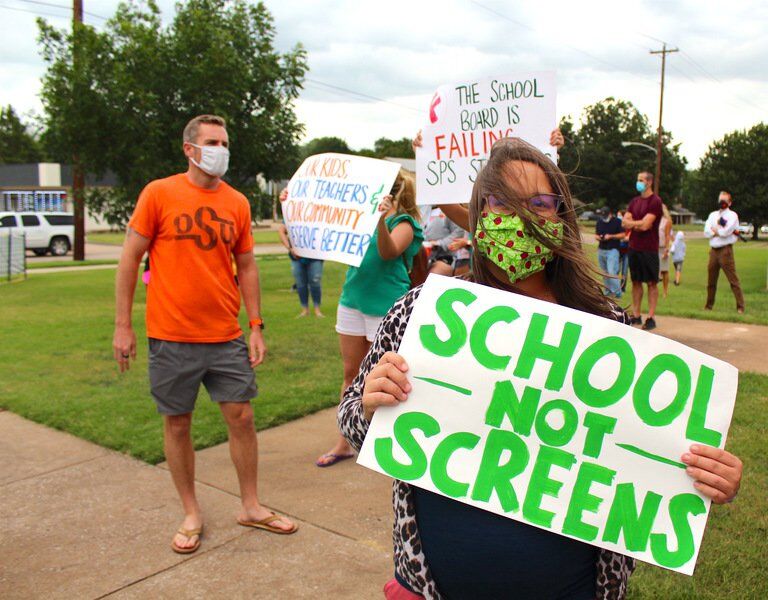 Parents gathered outside the Stillwater Board of Education building Tuesday to protest distance learning for students who had enrolled for traditional classes at Stillwater Public Schools. Michelle Charles/Stillwater News Press

Parents protested outside the Stillwater Board of Education building Tuesday as board members prepared to discuss alternate schedules that could get students back to in-person instruction. Michelle Charles/Stillwater News Press

Parents gathered outside the Stillwater Board of Education building Tuesday to protest distance learning for students who had enrolled for traditional classes at Stillwater Public Schools. Michelle Charles/Stillwater News Press

The Stillwater Board of Education is under pressure from parents to get their kids back in the classroom as quickly as possible. About 50 protesters gathered outside the Board of Education building Tuesday to express their objections to the distance learning program their children were thrown into after only two days of in-person instruction.

Some of those parents also used the school board’s public comment period to question why their children couldn’t be in class and to urge district officials to bring them back.

The decision to move to distance learning was made Aug. 23 by Superintendent Marc Moore, based on a community infection rates supplied by the Oklahoma State Department of Health.

Moore explained that he had determined Stillwater schools would continue with in-person instruction for the second week of school based on a color-coded alert system but saw infection numbers spiking over the next three days, which would push the district into Orange Level 1. The plan adopted by the district before school started called for distance learning once the county reached the Orange level.

Stillwater Public Schools is now looking at options for an alternating schedule as a half step between traditional and distance learning that would limit the number of people in school buildings at any one time.

One secondary model had groups alternating in school for five days and distance learning the following week.

The two committees came up with very different options. Moore told the board members the district may need to coordinate them so older siblings can care for their younger siblings or help them with school work while parents are working.

Moore said some of the feedback he’s gotten from parents showed that the possibility of changing schedules from week to week was a hardship for them. Parents also indicated they need more time to plan for the week.

Although the board members expressed support for having an option that wasn’t so “all or nothing,” Moore said it will take some time to develop a plan.

Teachers need time to adjust their lesson plans for intensive, hand-on instruction when students are physically present in the classroom and activities for distance learning that either front-load information they’ll use for the next week or reinforce information they’ve covered, Assistant Superintendent Cathy Walker said.

The alternating schedule would also be difficult for teachers to navigate in terms of workload, because they currently swap out time during the day to make up for the evening office hours they have instituted to answer student questions, Walker said. That won’t be possible if they’re teaching in a classroom all day.

Child care would remain an issue if students were only in school part-time. Chrome books, which are needed for some classroom activities, could be in short supply.

The board asked Moore to proceed with developing an alternating schedule.

Balancing competing interests and safety concerns is proving to be a difficult balancing act for the school district.

“The new normal is not normal for us anymore, board member Melody Wright said, noting that it’s hard to know what the best answer is. “… It’s the best of the worst sometimes.”