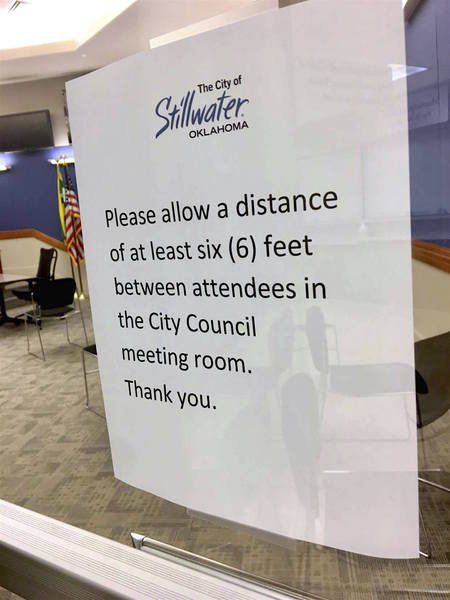 A sign posted at City Hall asks all people entering the Council chamber to allow at least six feet between themselves and others to lower the risk of transmitting illness. Michelle Charles/Stillwater News Press 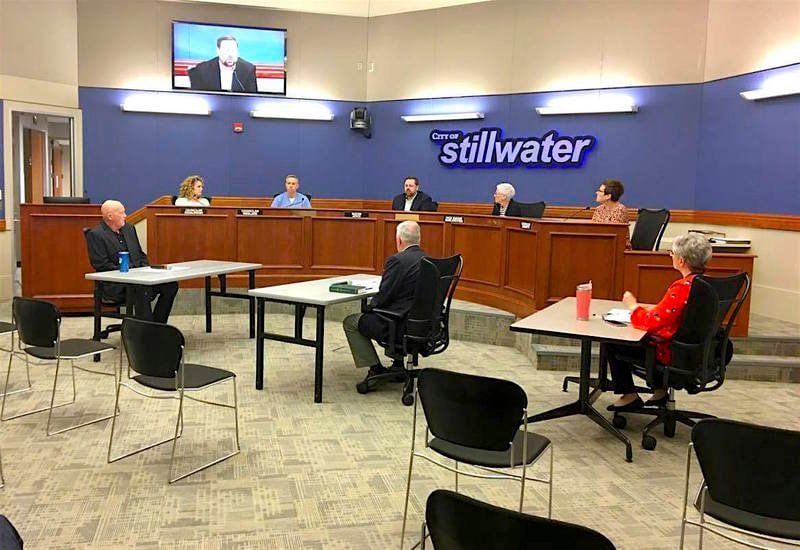 A sign posted at City Hall asks all people entering the Council chamber to allow at least six feet between themselves and others to lower the risk of transmitting illness. Michelle Charles/Stillwater News Press

The Stillwater City Council held a public meeting Wednesday to update residents on the City’s response to the threat of COVID-19.

Representatives from Stillwater Medical Center, Stillwater Public Schools and Meridian Technology Center also provided updates about the actions their institutions are taking to combat the spread of the novel coronavirus.

Mayor Will Joyce said the City of Stillwater has issued an emergency declaration and amended it twice.

The second emergency order dealt with scheduling and other personnel issues for police and fire personnel, who have collective bargaining agreements.

One of the changes involved personal grooming policies. Because facial hair can prevent a mask from providing adequate protection, personnel with goatees and beards are being asked to shave.

Chief of Police Jeff Watts has already shaved his goatee. Joyce said he is considering doing the same as a show of solidarity.

It strongly encouraged people not to gather in groups of more than 10.

Joyce said it hurts to have to make those kinds of decisions.

He called the novel coronavirus “an urgent public health crisis that we’ve got to take aggressive action to stop.”

City Manager Norman McNickle has directed the Stillwater Utility Authority to halt disconnections for non-payment. The SUA will consider a resolution on Monday formalizing that action.

It will also be asked to consider removing the 10% surcharge for late payments on water, electric and solid waste accounts.

He said service providers like Oklahoma Natural Gas and Suddenlink/Altice are taking the same steps to prevent people from being disconnected.

Suddenlink is also offering free broadband internet service while schools are doing online classes for families with students in K-12 or university students who don’t have internet service.

Beginning Monday, City employees will work a rolling two-week schedule with one half working from home and the other half at their offices. The two groups will switch after two weeks.

The municipal jail will be kept as empty as possible, McNickle said. As many people as possible will be cited and released and people held for more serious crimes will be transferred to the Payne County Jail.

Visitation at Stillwater Medical facilities is available 10 a.m. - 8 pm. daily and limited to one person, who must be 18 or over, at a time.

The hospital is limiting the use of waiting rooms and asking people to maintain a 6-foot social distancing radius from others.

Elective surgeries will be put on hold for one month. Emergencies will still be handled as needed.

SPS Assistant Superintendent for Operations Dana Renner told the Council the district is dealing with a three-fold scenario with guidance from the State Department of Education.

The highest priority is to make sure the students are cared for, Renner said.

To that end, the district will begin a feeding program on Monday that includes drive-through breakfast and lunch at six school sites and delivery via bus at nine other sites.

The meals are available free of charge to anyone age 1-18, without needing to fill out paperwork or meet income qualifications.

The second priority is to meet the needs of staff who are upset about being away from their students and concerned about their jobs.

Renner said using the definition of essential functions, the district anticipates being able to utilize administrative leave procedures to ensure support staff continues to be paid.

In a statement released Wednesday, the district said it will use a combination of on-site and remote work.

The third priority is safety, Renner said. The school shut down is currently set for a two-week window but the district really doesn't know how long it will go on.

The Stillwater Board of Education will hold a special meeting at 5 p.m. Friday to discuss the situation.

Meridian Technology Center Superintendent/CEO Doug Major said the technical school is completely closed and will not offer any day, evening or commercial classes through April 6.

Beginning Monday, the school will be open to staff only. The doors will be locked to the public.

Major said MTC is considering offering online classes for students who need a certain number of hours of training for licensure.

The Terrace restaurant operated by MTC’s food service program will be closed indefinitely.

Similar to Stillwater Public Schools, MTC’s certified staff will not suffer as much financially as support staff, Major said. It is looking at ways to help them.

OSU Vice-president for Enrollment and Brand Management told the Council that the university will shifting all courses to online for the remainder of the spring semester.

It will also be reducing occupancy in on-campus housing. OSU houses about 7,000 students, Wray said.

The university is already looking at alternatives to the traditional spring graduation ceremony.

The phrase “It’s a fluid situation,” was used several times by several different people during the meeting.

Joyce emphasized that the institutions are acting out of concern for public health and safety.

“Actions taken, messages sent, are based on not wanting the virus to spread any more than it already has,” Joyce said. “We are working as hard as we can to make the best decision we can.”