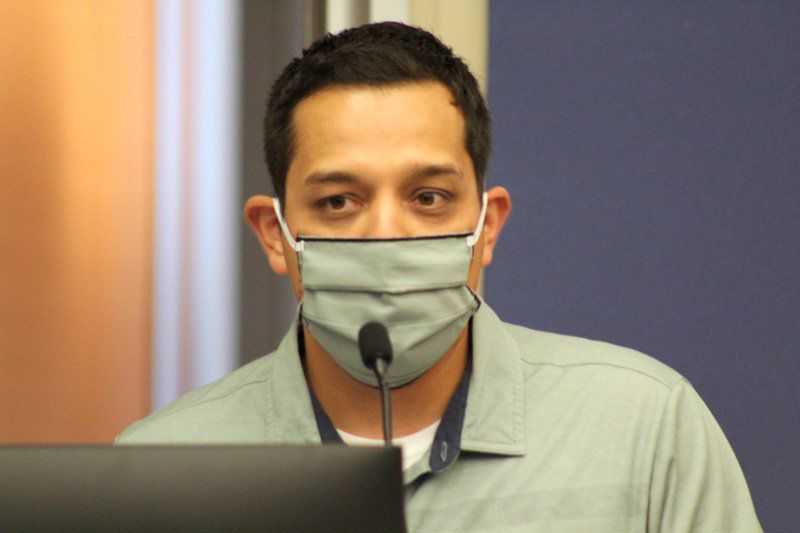 Stillwater Fraternal Order of Police vice-president and former city councilor Miguel Najera spoke for the police union Monday and requested that if the officers are expected to enforce a new ordinance requiring masks, that the city leadership supports them and actually prosecute offenders. Michelle Charles/Stillwater News Press 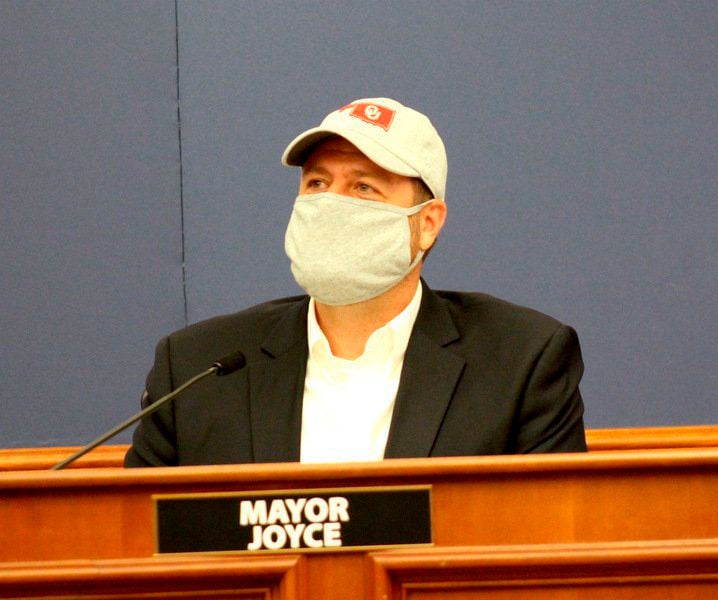 Stillwater Mayor Will Joyce paid up after losing a bet with Norman Mayor Breea Clark over which city would have a higher census return rate. Joyce had to wear an OU hat during Monday's city council meeting. Michelle Charles/Stillwater News Press

Stillwater Fraternal Order of Police vice-president and former city councilor Miguel Najera spoke for the police union Monday and requested that if the officers are expected to enforce a new ordinance requiring masks, that the city leadership supports them and actually prosecute offenders. Michelle Charles/Stillwater News Press

Stillwater Mayor Will Joyce paid up after losing a bet with Norman Mayor Breea Clark over which city would have a higher census return rate. Joyce had to wear an OU hat during Monday's city council meeting. Michelle Charles/Stillwater News Press

After receiving hundreds of emails, social media messages and phone calls, and hearing from 20 speakers during their live meeting, the members of the Stillwater City Council voted unanimously Monday to advance what may be the first ordinance in Oklahoma requiring people to wear face coverings in public.

The ordinance is supported by Oklahoma State University and Stillwater Public Schools, whose representatives appeared to express that support.

Norman Mayor Breea Clark, who appeared via Zoom to collect on a bet she made with Mayor Will Joyce over census response rates, said the Norman City Council will be considering a similar ordinance on Tuesday.

Stillwater’s ordinance will go to second reading at a time that has yet to be announced, with some changes to its original language. They include an exemption for pre-school age children and softened language regarding the responsibilities businesses have under the ordinance.

Although most of the councilors expressed a desire for more clarity in the language and several speakers asked that it be given more “teeth,” City Attorney John Dorman said it isn’t necessary to include a lot of specific penalties in the new ordinance because those are already provided in other ordinances already on the books.

The revised language the councilors discussed, at Joyce’s urging, includes changes to the phrasing regarding some issues from “shall” to “may,” to provide flexibility.

For example, the amended ordinance will require businesses to post signs – which the City of Stillwater will provide – informing people they are required to wear face coverings in the businesses. They have the option of asking people who refuse to wear face coverings to leave and having them charged with trespassing if they refuse, but the business owners won’t face a penalty for not confronting people who refuse unless their business becomes a consistent problem and begins to fall under nuisance or public health ordinances.

Business owner Austin Ray expressed concern about his employees being on the front line, charged with enforcing the ordinance and dealing with irate customers.

“… I’m not paying them to risk their safety,” he said.

The Stillwater Fraternal Order of Police also addressed the ordinance, with Miguel Najera, a former city councilor who is now a police officer, addressed the councilors and asked them to consider the ramifications for law enforcement.

Najera said the officers are not anti-mask. Most wear them regularly, and all wear them while working, as required.

The FOP argument centered on whether the ordinance is truly necessary. He said the public trusts them to enforce laws that are meaningful and have a purpose and noted that businesses already have the ability to require masks and ask people to leave if they refuse.

He said the union is worried about staffing issues when the limited officers on duty are called on repeatedly to deal with mask issues.

Several of the people who addressed the City Council also raised concerns about the practicality of holding parents and childcare workers responsible for keeping masks on very young children. It could present an undue burden.

“I can’t keep my 2-year-old’s shoes on. How will I keep a mask on?” Burck Berry asked the Councilors via Zoom.

On the other hand, Vice Mayor Pat Darlington reported that her 2-year-old granddaughter has been lining her dolls up and putting masks on them.

“She gets it,” Darlington said.

The revised language the council finally agreed on allows educational facilities with their own public health safety plans to substitute their own procedures for the children in their care.

A majority of the speakers supported adopting the mask ordinance, and the councilors reported the same result from the emails and messages they had received.

Several shared examples of research that shows masks as an effective way to reduce the spread of COVID-19.

A few people objected to the ordinance, primarily based on what they see as a violation of their personal freedoms.

Brice Chaffin and Riley Flack raised the specter of the “nanny state.”

“I don’t think it’s the purpose of the Stillwater government saying you have to wear your coat when you go out because it’s cold,” Chaffin said.

Flack and Stephanie Smith both referred to the wearing of masks as “virtue signaling,” a term used to criticize people who are judged to be taking a conspicuous action that is essentially useless, just to garner praise or make themselves look like good people.

Smith asked for understanding for people who have a different point of view and said she has been shamed and called names for not wearing a mask.

She said it is difficult for her to wear a mask and she almost fainted while wearing one during a haircut.

Kirsten Hart said she supports the ordinance and she vehemently disagreed with Chaffin and Flack.

“Apparently we do need to be nannies for people who don’t have the consideration for the health of others,” Hart said.

Several other speakers said suggesting and asking hasn’t worked. A mandate is necessary to get enough people wearing masks to reduce the transmission of the disease.

Joyce said that is the ultimate goal.

David Kersnar, an Oklahoma State University professor and head of the Theatre Department, summed up what most people seemed to be thinking.

“This is not a political issue, this is an issue of health...” he said. “This is not the time for us to squabble over whatever we’re reading on Facebook right now. … I put my big boy pants on and I put my mask on.”