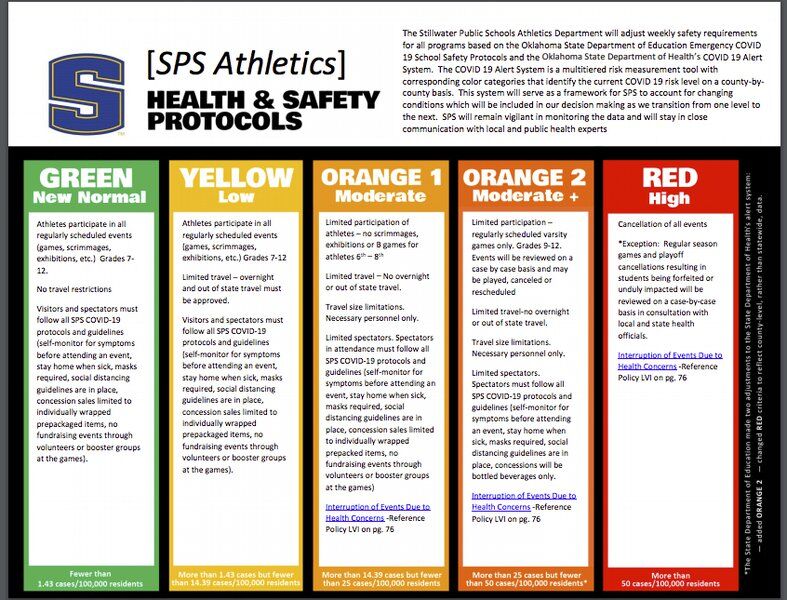 Additional COVID-19 safeety protocols governing athletics and other extracurricular activities are under review and are expected to be adopted by the Stillwater Board of Education when it meets Thursday. Provided 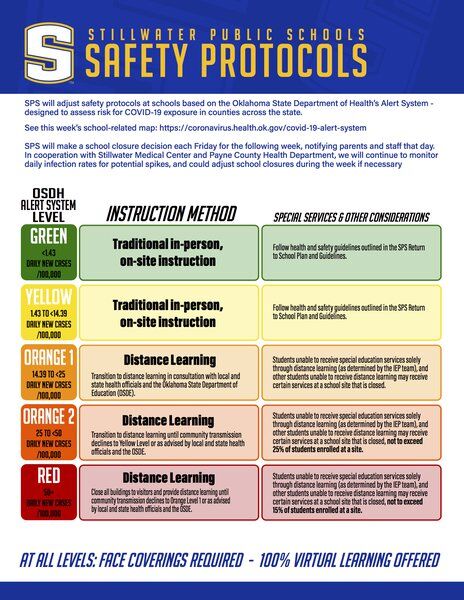 Additional COVID-19 safeety protocols governing athletics and other extracurricular activities are under review and are expected to be adopted by the Stillwater Board of Education when it meets Thursday. Provided

Students in Stillwater Public Schools will continue distance learning for at least another week, based on new COVID-19 infections reported in Payne County.

The decision is made each week by Superintendent Marc Moore, based on a report from the Oklahoma State Department of Health that measures the rate at which the virus is spreading, rather than total active cases.

The school district announced Friday that Payne County had moved from Orange Level 2 to Red under the Oklahoma State Department of Education’s COVID-19 alert system. That change was based on 58.17 average new cases daily, reported per 100,000 in population, over the past week.

An average daily rate of 50 new cases per day is the threshold for Red, the highest level on the alert system. That takes only 41 new cases per day, based on Payne County’s actual population, about 82,000.

Students enrolled for traditional instruction at SPS – about 70% of the student body – have been in distance learning since Aug. 24, when a three-day spike in community infections moved the county into Orange Level 1 after only two days of in-person instruction.

New infections, which started to increase when Oklahoma State University students returned to Stillwater, have continued to rise sharply since since then.

Although district administrators are developing an alternating schedule that could be implemented once the county drops to Orange Level 1, fewer than 24 new infections per day, students will have to continue with distance learning until the rate of infections drops significantly.

The jump to a higher alert level has led to questions about how it will impact sports and other activities, which have continued even with the move to distance learning.

The Board of Education will consider adopting new safety protocols for athletics and other extracurricular activities when it meets Thursday.

Superintendent Marc Moore said until then, he and his leadership team will continue to make decisions administratively, with the proposed protocols in mind.

Although those protocols call for activities to be canceled at the highest alert level, there are provisions for sports that allow determinations on a case-by-case basis in consultation with health officials if the cancellation would cause a forfeit or create an undue hardship.

There is also a provision to allows for guidance from the Oklahoma Secondary School Athletic Association, if any is issued.

Moore said as long as the district remains at Red, teachers will continue to work from their school sites but will only be able to meet with each other virtually.

The number of students allowed in the building for special education services will drop to no more than 15% of the students enrolled at each site.

School buildings will not be available for use by outside groups until the district drops to Orange Level 1.