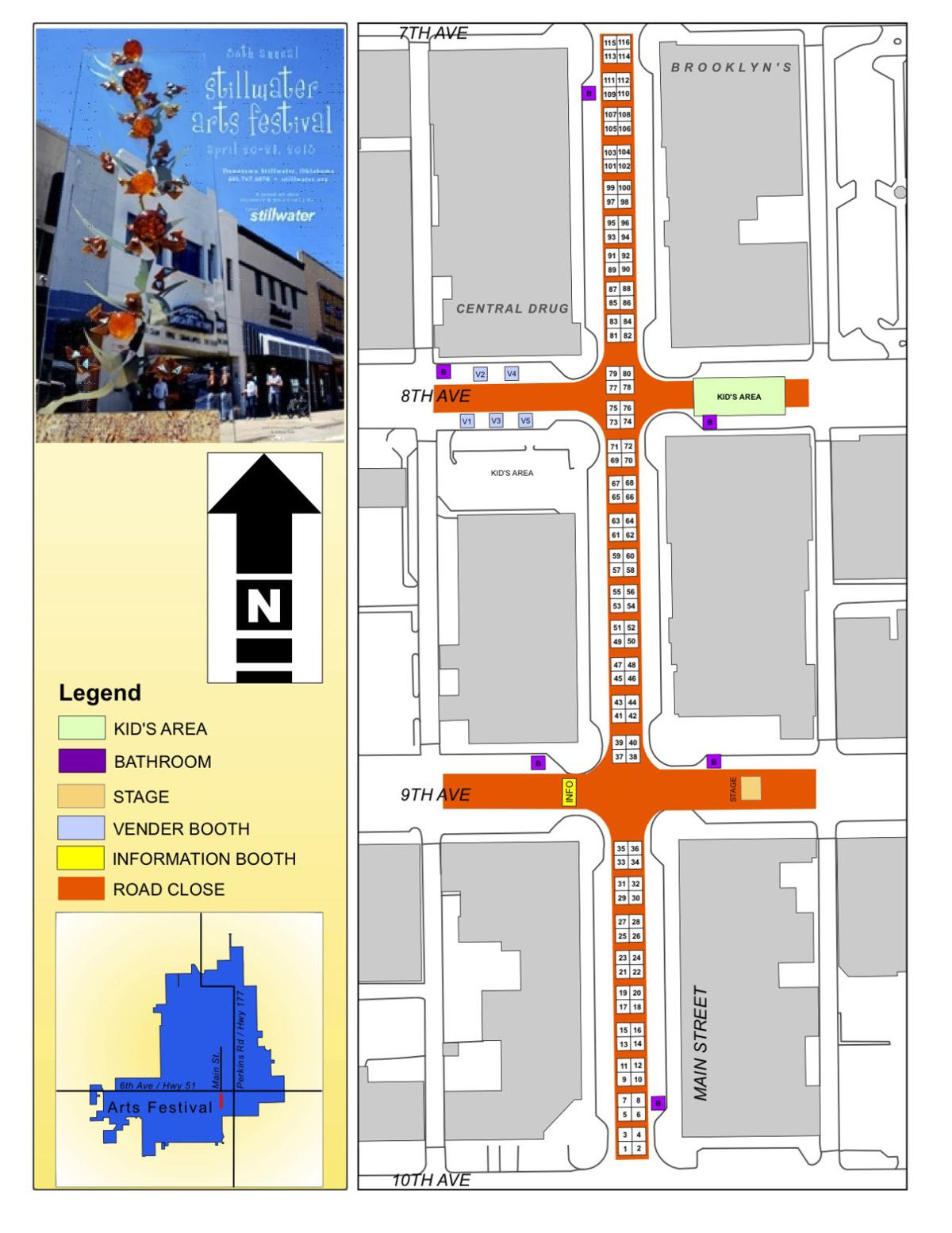 Downtown Main Street will close from Seventh to Tenth avenues at 7 a.m. on Friday. The juried art show is presented by the city of Stillwater with live entertainment, kids activities, art exhibits and sales, a recycled art contest and food vendors for a family-friendly weekend of fun. 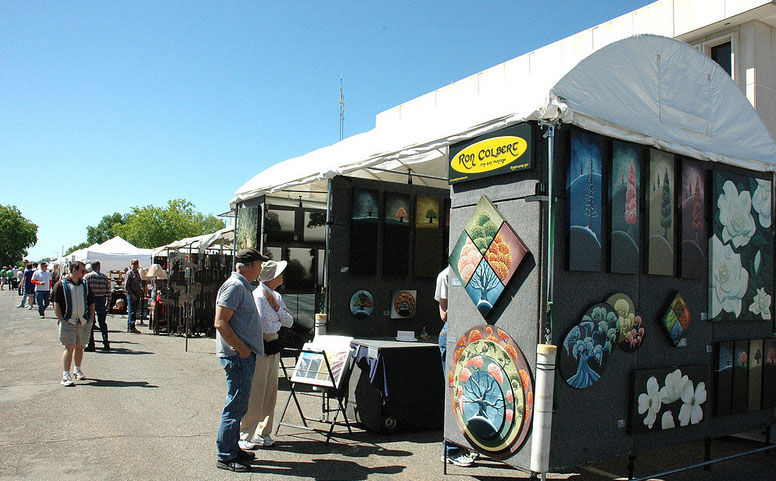 Artists come from all over the United States to the annual Stillwater Arts Festival.

Downtown Main Street will close from Seventh to Tenth avenues at 7 a.m. on Friday. The juried art show is presented by the city of Stillwater with live entertainment, kids activities, art exhibits and sales, a recycled art contest and food vendors for a family-friendly weekend of fun.

Artists come from all over the United States to the annual Stillwater Arts Festival.

Streets will close at 7 a.m. Friday from Seventh to 10th Avenues on Downtown Main Street with music starting at 4 p.m. to kick off Legends Weekend in Stillwater. Stephanie Gudgel, Stillwater Community Center manager, has lined up a lively weekend of entertainment with a “great party band on Friday night – Val Joe and the Strike Anywheres.” The Straight Shooter Band follows from 6 to 8 p.m.  Performances by local musicians and children’s groups, along with artists’ demonstrations, will continue throughout the weekend.

The Rocky Mountain Chocolate Factory and other downtown merchants will offer specialties during the festival, along with street vendors including Blue Mountain Kettle Corn from Norman and Okie Old Time Root Beer from Ponca City. Oklahoma City’s Urban Wineworks and McAlester’s Whispering Meadows Vineyards and Winery will serve libations at the show.  Stillwater’s Blue Spruce and Cafe Bella will set up shop downtown for the weekend, too.

“More than 10,000 people are expected downtown over the course of the weekend, with free events and the juried art festival coordinated by Rachel Palmer and Amy Gifford,” said Business Improvement District Coordinator Amy Jo Frazier.

In its 36th year, a new twist for the arts festival is a recycled art competition called the “Found Art” contest. Oklahoma State University students and high school seniors or juniors have entered works with more than 50 percent of the materials composed of discarded or recycled objects to be judged on creativity and craftsmanship. Cara Beer is coordinating the student entries.

With the start of citywide curbside recycling this summer, it was a great opportunity to introduce young people to the value of recycled materials in artistic ways, Beer said. There will be hands-on activities for children, along with literature and instruction materials for families to learn about recycling their waste and save on the city’s expenses of dumping so much at the landfill site.

Ryan Haase, president of ECO-OSU and a committee member for the Institute for Creativity Initiative, said there will be demonstrations of “upcycling” which is the ability to take what once was just garbage or recyclables to become something practical or artistic.

“Found art is taking what can be commonly found as refuse and amalgamating these separate elements into an esthetically or meaningful 21st century artifact,” he said.

Along with the recycling children’s activities, there will be a Kids Area, staffed by festival volunteers, to let children create their own art with bead jewelry, sand art and chalk painting.  Other activities for children will include basketball, hula hoops and giant inflatables to jump on all day although there are events planned throughout the city during Legends Weekend.

Saturday's live entertainment starts at 10 a.m.  with *ville, a Midwest-Indi-Blues-Folk group, followed by Kalyn Robinson; Dave and Hannah Bradley, a father and daughter duo; the Jean Hill Irish Dancers; Chris Firey Jazz Ensemble and In Use from the OSU Jazz Department.  On Sunday, the festival will feature Olivia Fletcher, Distinguished Young Women of Payne County; Stillwater Pipe Band and the Stillwater Community Singers. Gudgel encourages everyone to bring their own chairs but no coolers are allowed.

The promotion of downtown activities with OSU won an Oklahoma Tourism Redbud Award in 2012 with the art show representing Stillwater’s longest running festival.

Belanus, an OSU engineering professor, has been displaying his woodturning at the show for ten years. Belanus said "everything at the show is real handmade high-end art." There are items in multiple price ranges and sizes to suit different budgets and tastes.

“For the artist, it is about standing next to your work and the satisfaction that comes when someone likes your work enough to pay for it,” he said. “Nothing here is manufactured or part of a kit.  We have interacted with the materials . . . the soul of the maker is in the work.”

Many types of media will be exhibited and for sale from basic drawings to paintings, jewelry, pottery, photography, sculpture and metal art. Frank Mirabel is returning this year with traditional Native American drums.

“All of his work is authentic from start to finish – and handcrafted from the hide to the assembly,” said Ilona Spruce, director of Taos Publeo Tourism.

Fusion art will be featured by Texas artists Liv and Ron Colbert who combine Liv’s photography with Ron’s paintings into a marriage of their work.

“The clientele that walked through our booth were very nice and knowledgeable about art work,” Liv Colbert said.

Stillwater resident Russ Teubner, CEO of Hostbridge and an avid art collector, said he won’t miss the downtown arts festival. He never knows what will grab his attention.

“Usually it involves a combination of factors — color creativity and the integration of material,” Teubner said.

He likes art that clearly illustrates the energy applied by the artist to create the piece — and he enjoys making new discoveries.

Daniel Bondroff from Miami, Fla. is bringing more than 100 new items for his booth inventory which features tropical landscapes in soft pastel chalk.

Bondroff said “Oklahoma is very different than Miami – the people are so laid back and NICE!”

“We are known for our hospitality,” Frazier said and the city wants to send a warm Stillwater message — y’all come back now.