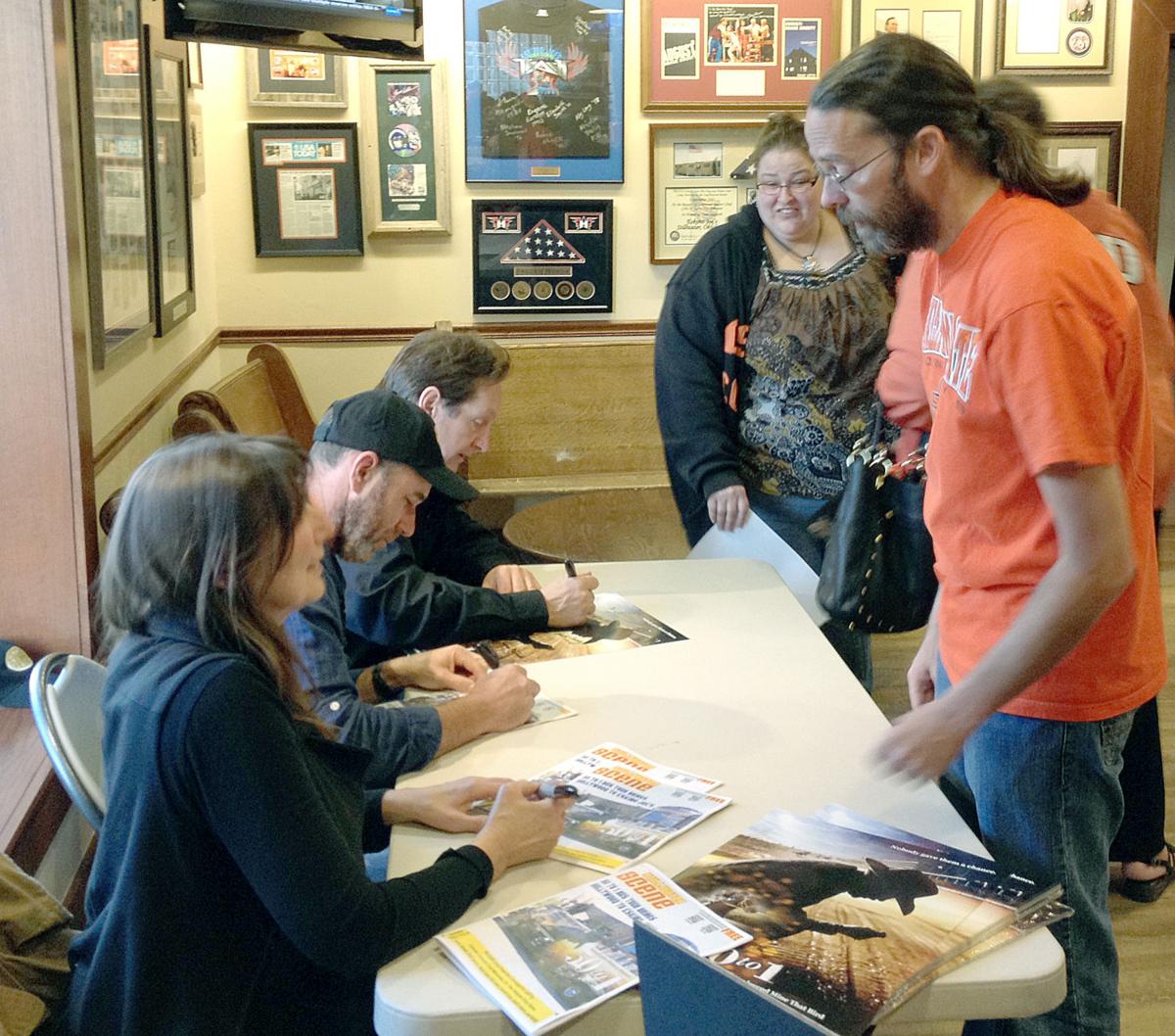 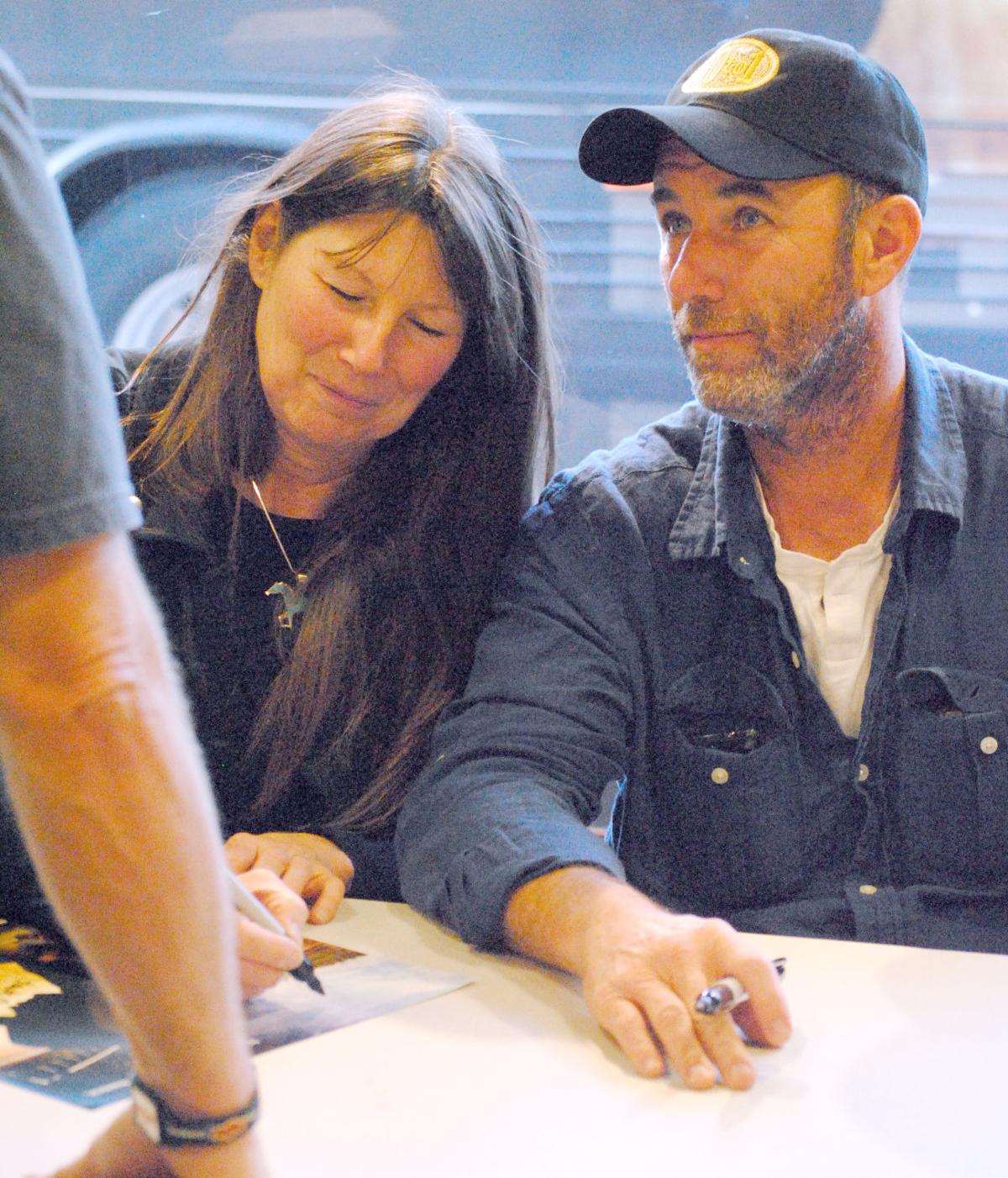 Co-writer Faith Conroy and actor Jamie McShane sign 50 to One movie posters Tuesday at Eskimo Joe's in Stillwater. Director Jim Wilson also was at the session. The trio are touring Oklahoma promoting the movie 50-to-1 which tells the story of Mine That Bird�s 2009 Kentucky Derby victory.

Co-writer Faith Conroy and actor Jamie McShane sign 50 to One movie posters Tuesday at Eskimo Joe's in Stillwater. Director Jim Wilson also was at the session. The trio are touring Oklahoma promoting the movie 50-to-1 which tells the story of Mine That Bird�s 2009 Kentucky Derby victory.

The movie “50-to-1” tells the story of Mine That Bird’s victory at the 2009 Kentucky Derby, but it’s more than the story of a horse and a race.

“You can’t really build an entire movie around one two minute race,” Conroy said during a publicity stop in Stillwater Tuesday. “It turned out the people who owned the horse, the person who trained the horse, all the people in the story itself were very colorful characters.”

After getting to know the real-life characters and learning their stories, Conroy said she realized there was so much more than just that horse race. It was the story of an underdog beating the odds and the people involved.

“We got to know them and realized there was a lot more story here that I think the general public can relate to,” Conroy said. “We’ve all been underdogs at some point in our lives and these guys came into this entire experience as 50-to-1 themselves and took it all on and look at what happened for them.”

Conroy and Wilson started the journey of telling the story of each character, especially Mine That Bird, portrayed by Sunday Rest.

“It’s all of them,” Conroy said. “They’re all 50-to-1. Every single one of these people was an unlikely hero here.”

The movie is in theaters and cast and crew is on a promotion tour. Conroy and Wilson have witnessed viewers’ reactions first-hand.

At stops along the way, they are sometimes able to sneak into theaters and see people’s responses, such as laughing, cheering and hollering. Conroy said grown men have walked out crying.

“The only way we get that is to be out here on this tour and are actually able to see the response for ourselves,” Conroy said. “We know for a fact we’re touching people because we’re right there when they come out. They don’t even know we’re there, and we can tell we’re affecting them and getting the emotions we wanted to inspire with what we wrote.”

Wilson said it was important to include Stillwater as one of the tour stops because Stillwater can reach a huge audience.

Stillwater is home to more than 25,000 students, which Wilson prefers their energy. And it’s the home of the Cowboys.

“You guys are trendsetters,” Wilson said. “You write articles. You say what’s hot or what’s not. So why not make a stop here? It makes sense. And it’s about cowboys. You are the Cowboys. You define Cowboys.”