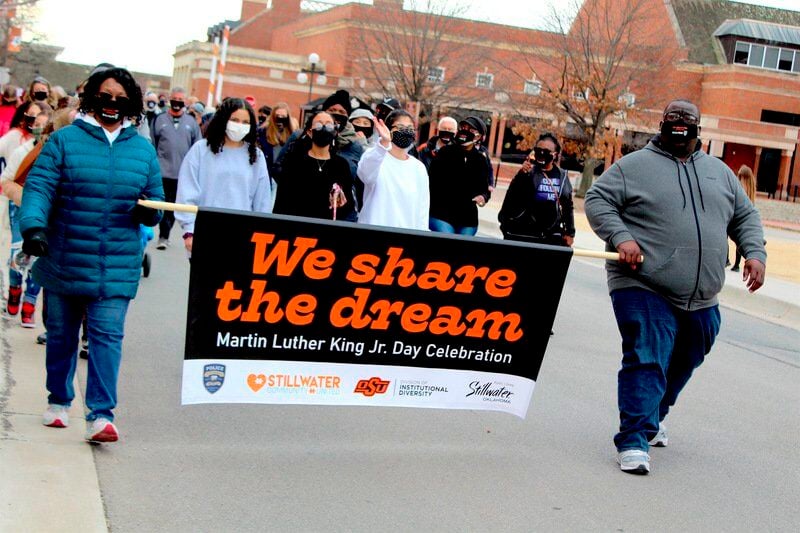 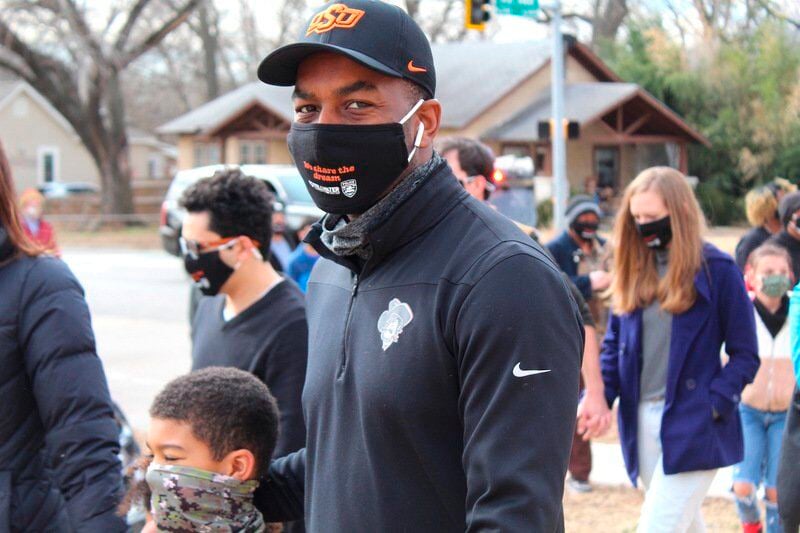 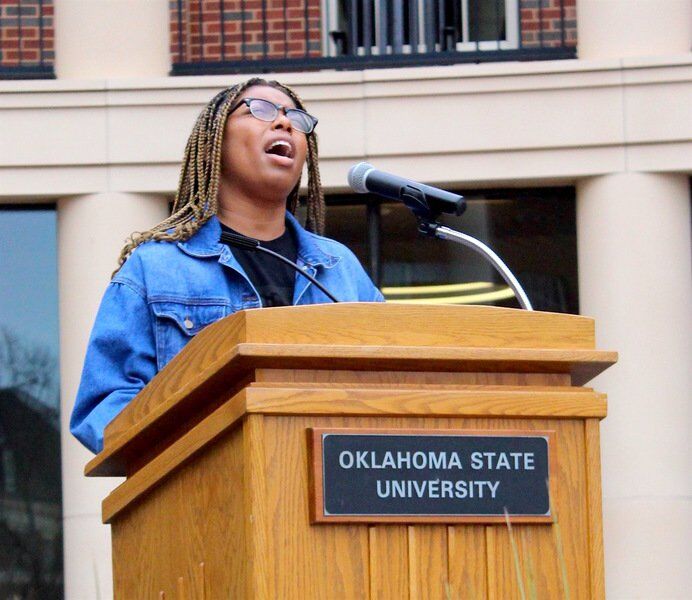 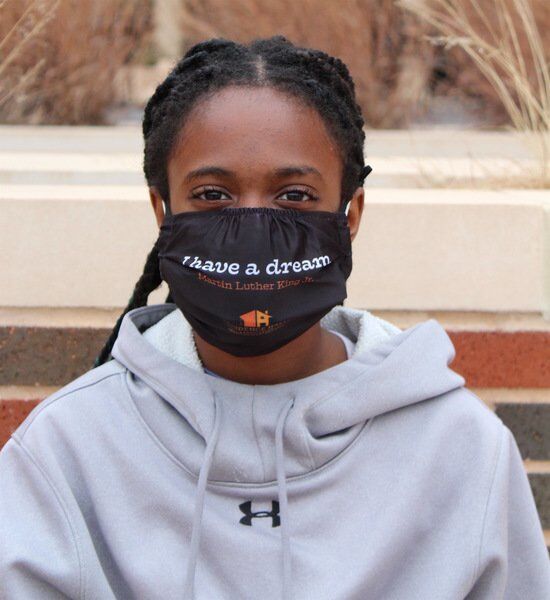 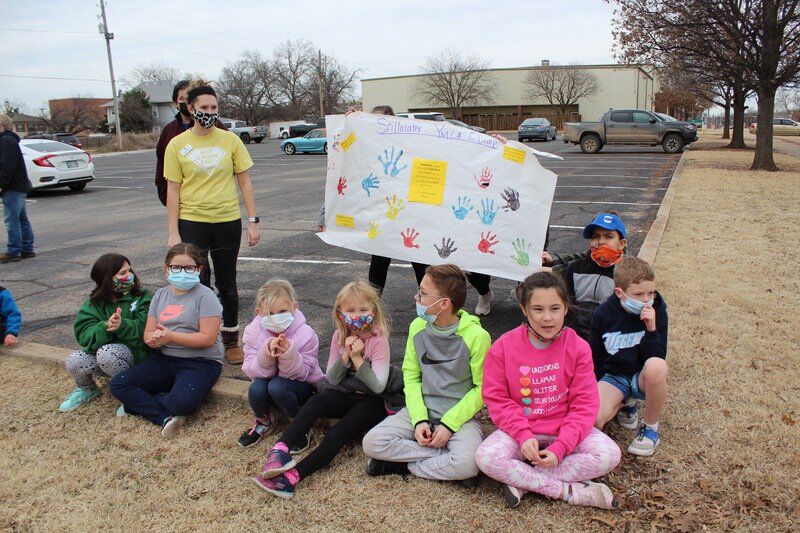 Students from the Stillwater YMCA day camp joined the celebration of Dr. King by making a banner to hold as the march went by. Michelle Charles/Stillwater News Press 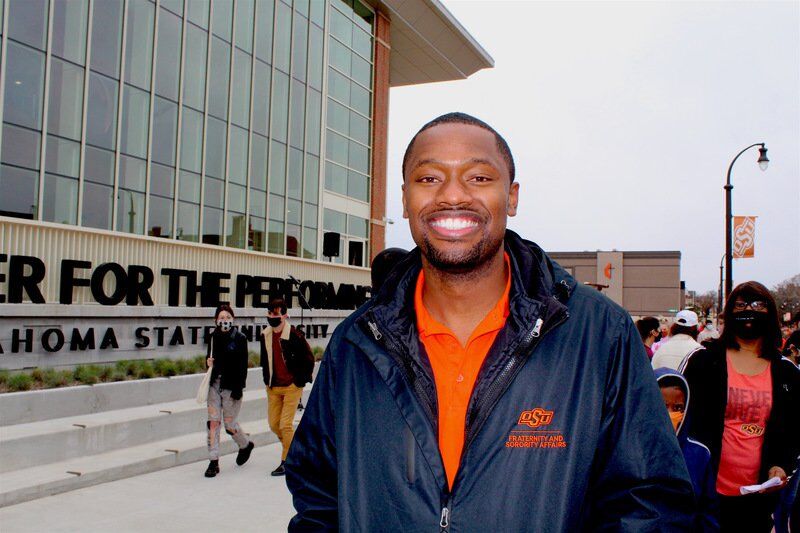 Student Caileb Booze spoke on the OSU campus during the celebration of Martin Luther King Jr. Day, challenging people to be pragmatic realists who engage with each other to recognize realities and continue improving. Michelle Charles/Stillwater News Press

Students from the Stillwater YMCA day camp joined the celebration of Dr. King by making a banner to hold as the march went by. Michelle Charles/Stillwater News Press

Student Caileb Booze spoke on the OSU campus during the celebration of Martin Luther King Jr. Day, challenging people to be pragmatic realists who engage with each other to recognize realities and continue improving. Michelle Charles/Stillwater News Press

Stillwater once again came together as a community to celebrate the legacy of Dr. Martin Luther King Jr. on the federal holiday that bears his name.

COVID-19 forced the organizers to get creative about ways to commemorate Dr. King, this year, while still providing social distance. The usual assembly at Mt. Zion Missionary Baptist Church or the Stillwater Community Center dropped in favor of a longer, relay-style march from Southern Woods Park to the Oklahoma State University campus.

Mt. Zion Pastor Calvin Miller said he would like to see the relay march, which allowed people to join and drop off at different points along the route as needed, to continue.

The marchers eventually met OSU students, faculty and staff at the plaza in front of the Spears School of Business, where President Burns Hargis gave a few remarks and OSU student Calyn Adams performed the Black national anthem, “Lift Every Voice and Sing.”

They then marched across campus to the McKnight Center for the Performing Arts where OSU senior and outgoing Interfraternity Council President Calieb Booze was invited to address the crowd.

“It seems like you can’t turn on the TV or listen to a conversation for more than 30 seconds without hearing some sort of division, disruption or disaster,” Booze said. “And as that rhetoric continues or we buy into that, it’s really hard to think that things can change.”

It’s easy to start believing there’s nothing that can be done about it, he said. That’s what makes days like Stillwater’s celebration so important, because Dr. King believed in something different and that the best was yet to come.

The atmosphere when Dr. King was doing his work 60 years ago was similar, although the issues were more focused on basic civil rights like housing for Black people and other minority groups. Booze said he’s sure people despaired of things changing before Dr. King and his organization began their work, escalating to protests and civil disobedience, similar to what people are doing today.

King’s approach was revolutionary because it was non-violent as it sought systemic change and a shift in the collective consciousness of the country to create a sense of value for every human life.

“His objective was not necessarily to beat the other person,” Booze said. “But the objective of non-violent protest was ... to achieve friendship and understanding while simultaneously defeating injustice, but not the person. Whenever we seek to try to defeat the person, both sides actually lose.”

Because there are still so many social issues 60 years later, it’s easy for some people to become extremely pessimistic and think nothing will ever get better, Booze said. Meanwhile, some others might be extremely optimistic, thinking there are no problems left to solve just because slavery was abolished and there are Black students on college campuses.

Booze talked about the perspective he calls the “pragmatic realist,” who takes the truths of the first two without going to the extremes of either.

“Yes, we’ve come a long way from 1960, from 1860, and we must celebrate that, we must encourage that, but at the same time, there is still progress to be made,” he said. “There are still steps to take forward for us.”

The problem with being too pessimistic or too optimistic is it absolves you of action, Booze said. People can call it like it is without accepting it. There will always be something challenging us to be better.

“If we’re going to get where we want to go, if we’re ever going to progress as people then we can’t be separated from each other,” Booze said. “That’s not to say we throw in the towel for advocating for systemic change because that is so necessary … the reality is, the more policies you implement, they’re great, but policies don’t change people. Policies are purposed to maintain order for the people who refuse to change so that everyone else isn’t hurt in the process.