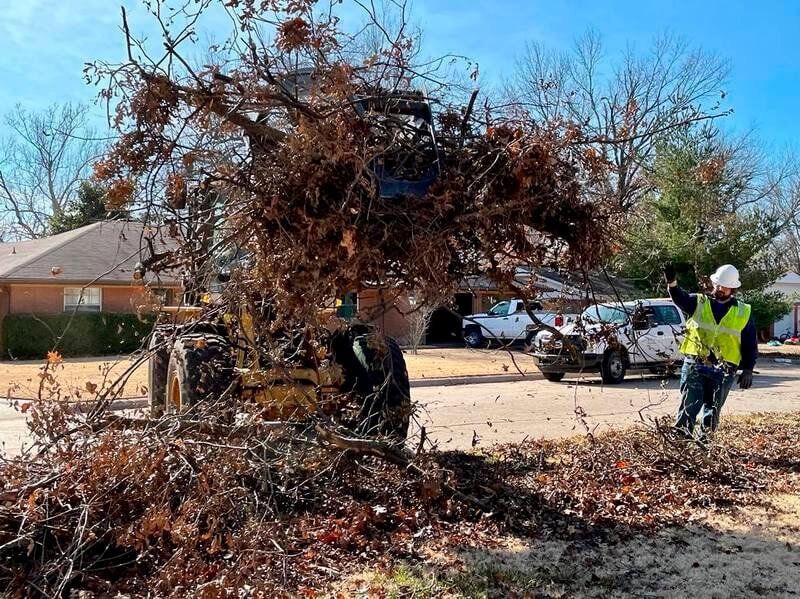 Clean-up crews are working in neighborhoods on the same day they have trash pick up so people across the city can see some measure of progress, City Manager Norman McNickle said. Michelle Charles / Stillwater News Press 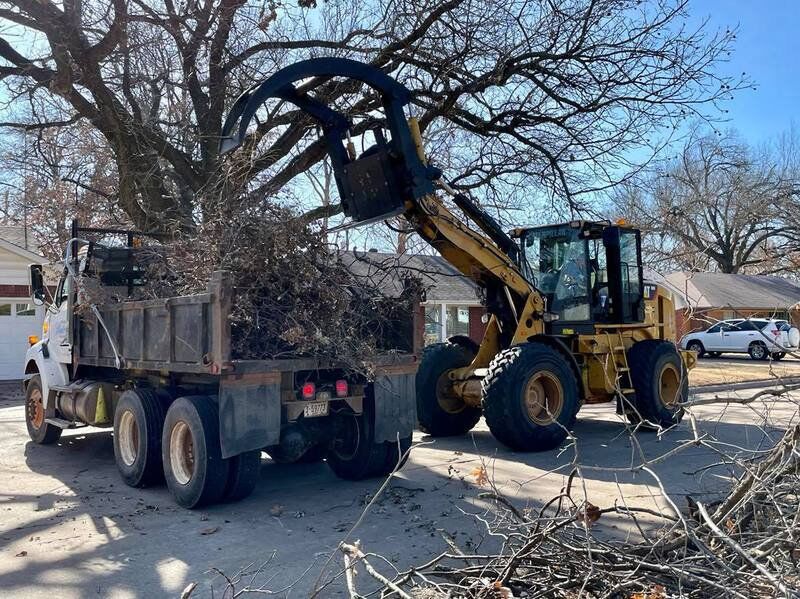 A City of Stillwater crew loads debris from the Oct. 26 ice storm that has been piled at the curb outside a Stillwater home. City Manager Norman McNickle estimates the process is about 65% complete. Michelle Charles/Stillwater News Press

Clean-up crews are working in neighborhoods on the same day they have trash pick up so people across the city can see some measure of progress, City Manager Norman McNickle said. Michelle Charles / Stillwater News Press

A City of Stillwater crew loads debris from the Oct. 26 ice storm that has been piled at the curb outside a Stillwater home. City Manager Norman McNickle estimates the process is about 65% complete. Michelle Charles/Stillwater News Press

Three months after a freak, early-season ice storm that shattered trees and knocked out power lines serving an estimated 500,000 people across the state, some cities are still struggling to clean up tons of debris. Stillwater is among them.

He estimates crews are now about 65% done with the job. It will likely be at least mid-February before it’s complete, he said.

Lack of resources has been an ongoing problem.

The City of Stillwater provided a dump site at Wittenberg Park for a few weeks after the Oct. 26-29 storms for residents who wanted to haul their own limbs.

That site was closed because the city didn’t have enough of either to operate a drop site and simultaneously run clean-up crews through neighborhoods, McNickle said. That continues to be the case.

The Convenience Collection Center at 807 S. Perkins Road, which usually accepts green waste from residents, is also not able to accept limbs, lawn clippings or leaves at this time because all equipment has been diverted to the clean-up effort.

Although progress has been slow, handling the clean up in-house has kept costs down to about $60,000 so far, McNickle estimates.

Staff looked at other options, including hiring an outside firm to haul the debris but that would have come at a cost McNickle characterized as “astronomically expensive.”

Equipment has been an issue.

McNickle said buying a grinder would have cost about $250,000 and hiring experienced equipment operators, even as temporary workers, is another challenge that takes time away from the clean-up.

Handling the hauling with city crews and dumping the debris with Cedar Creek Farms, the city’s recycling handler, was by far the cheapest option, he said.

Cities have taken a variety of approaches.

Cushing City Manager Terry Brannon previously told the News Press his city had also considered using outside services but learned it could cost up to $350,000. Cushing, which has a much smaller population than Stillwater, also opted to handle its own clean up.

In December the Mustang Times reported that Mustang, a city of 21,459 residents that is part of the Oklahoma City Metro area, expected its clean-up costs to exceed $1.5 million.

In November the Enid News and Eagle reported that Enid’s City Manager projected its clean-up costs at $500,000, including $80,000 for contracted teams to operate chippers 10 hours a day, six days a week and $100,000 to cover employee overtime, materials and equipment.

Oklahoma City estimated its costs at about $7 million as it asked for the public’s patience for a process expected to take months.

McNickle said some areas of Stillwater sustained more damage than others. Storm debris is being collected in various areas of town on the same days those areas have trash picked up, so everyone can see some progress. But it hasn’t been fast enough for many of the residents city staff hears from and he understands their frustration.

“They just want it done now,” McNickle said. “… We’re moving as fast as we can.”

Pres. Donald Trump approved a federal disaster declaration on Dec. 21, paving the way for government entities and utilities to receive reimbursement from FEMA for up to 75% of their damages.

But that reimbursement can take up to a year to come in, Enid City Manager Jerald Gilbert said.

McNickle assures residents that he and everyone else at the City of Stillwater are also anxious to get everything cleaned up.

The effort is diverting resources from the Operations division that would normally go toward things like filling potholes, fixing sidewalks and installing utility meters, he said.