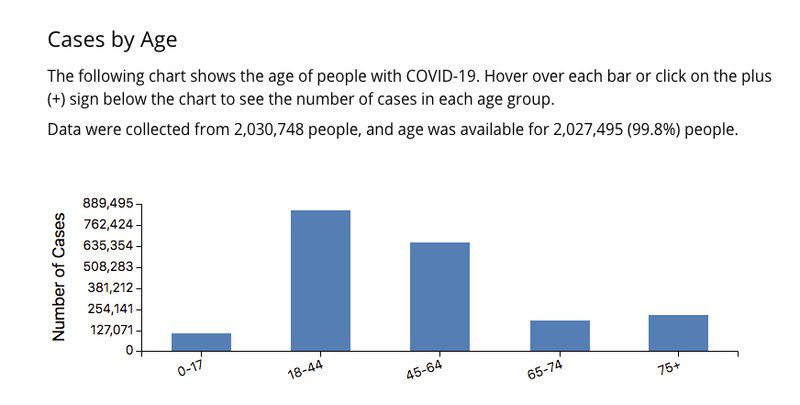 The Centers for Disease Control and Prevention are reporting a nationwide increase in COVID-19 infections among people in the 18-40 age range. Source: CDC 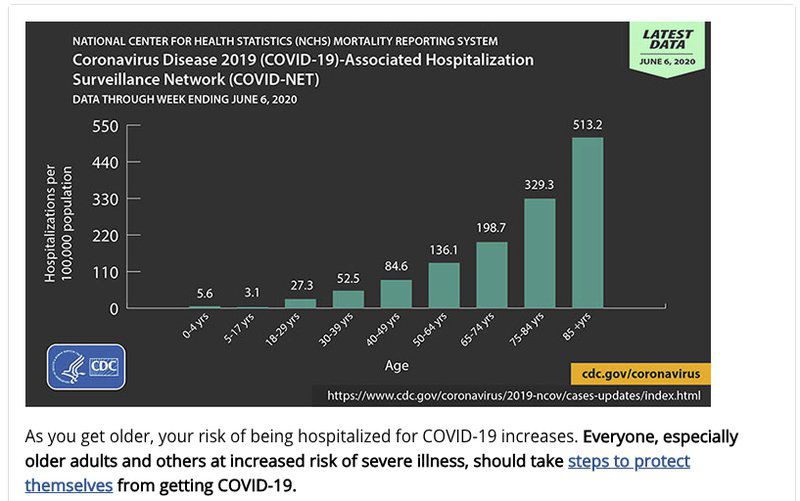 Older Americans make up a majority of the hospitalizations. Public health officials worry about the potential for a surge in cases among younger demographics to jump to older and more medically vulnerable populations. Source: CDC

The Centers for Disease Control and Prevention are reporting a nationwide increase in COVID-19 infections among people in the 18-40 age range. Source: CDC

Older Americans make up a majority of the hospitalizations. Public health officials worry about the potential for a surge in cases among younger demographics to jump to older and more medically vulnerable populations. Source: CDC

After months of pleading with the public to wear face coverings when they go out, the Stillwater City Council is considering a new city ordinance that would require people to wear masks in public.

The Stillwater City Council is expected to discuss the measure during its July 6 meeting, City Manager Norman McNickle told the News Press. It’s not something the councilors have wanted to do, given the backlash they faced in March after enacting an emergency declaration requiring masks be worn in a variety of businesses.

Mayor Will Joyce has been an outspoken advocate for the wearing of face coverings as a way to slow the spread of COVID-19 during the shutdown and continuing as more businesses and public gathering places opened up.

Until early June, Stillwater had held at 22 total and zero active cases for weeks. As of Thursday, Payne County’s cumulative total had climbed to 300 cases.

Stillwater, which represents about 61% of the county’s population, contributed 88% of those cases with a cumulative total of 264. That number included 109 recoveries and 155 active infections, 85% of Payne County’s 183 active infections.

“The rapid rise in cases is concerning, and we want to make sure we’re considering every possible option for the public’s health and well-being,” Joyce said Friday.

Younger people have made up the bulk of recently diagnoses cases and hospitalizations have remained low, but city and public health officials have said it won’t take much for infections to make the jump to more medically vulnerable populations, and that’s when hospitalizations would also start to rise dramatically.

The Centers for Disease Control and Prevention reports that 8 out of 10 deaths from COVID-19 have been in adults 65 or older.

On Thursday, the CDC published an updated list of underlying medical conditions that would make people of any age more vulnerable. In addition to previous warnings for people with breathing difficulties and compromised immune systems, the new warnings include people with:

The City Council has indicated it will monitor hospitalizations as a cue to roll back Phase III openings or enact more restrictive measures. Stillwater Medical Center had not needed to enact its surge procedures at press time, but hospitals in neighboring states like Texas are reporting their Intensive Care Units are nearing capacity.

City leaders have expressed concern about the possibility of spiking infections among younger residents making the jump to older and more medically vulnerable groups.

Stillwater’s city government is working with community organizations to build support for wearing masks in public as a prevention measure.

Stillwater Chamber of Commerce President/CEO Justin Minges said the Chamber’s board of directors has approved launching a campaign to encourage the community to voluntarily wear masks. It’s looking at campaigns in other areas for ideas.

Minges said the goal is to get community members to understand that it’s within their power to help slow the spread without having to roll back to Phase II or enact other restrictive measures.

“It’s a way to keep the economy open and stronger,” he said. “… It’s the least restrictive thing.”

McNickle said the councilors need businesses and community organizations to step up and stand with them, whether or not they pass a mask ordinance.

It’s a sort of “chicken and egg” situation.

Getting voluntary compliance could prevent the City Council from having to pass an ordinance. But having an ordinance in place would give the businesses cover to make their employees and customers wear masks, a move some have been reluctant to make without that municipal requirement.

McNickle said the Councilors will be discussing the possible ordinance on July 6, with the idea of giving it a sunset date tied to a revised emergency declaration. Changes could be made during the meeting.

It would require a 3-2 vote of the City Council to enact the ordinance, McNickle said.

Stillwater’s leaders are trying to get the community to support wearing masks in public as a way to protect their neighbors and keep businesses open.