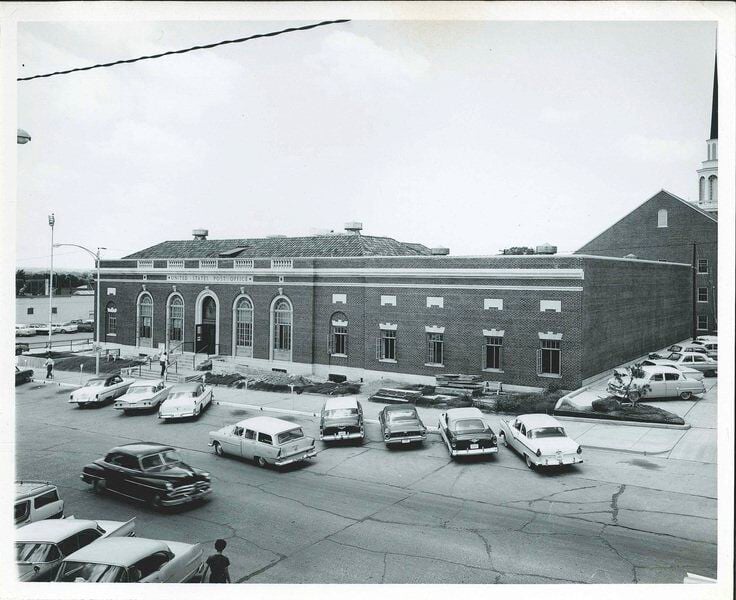 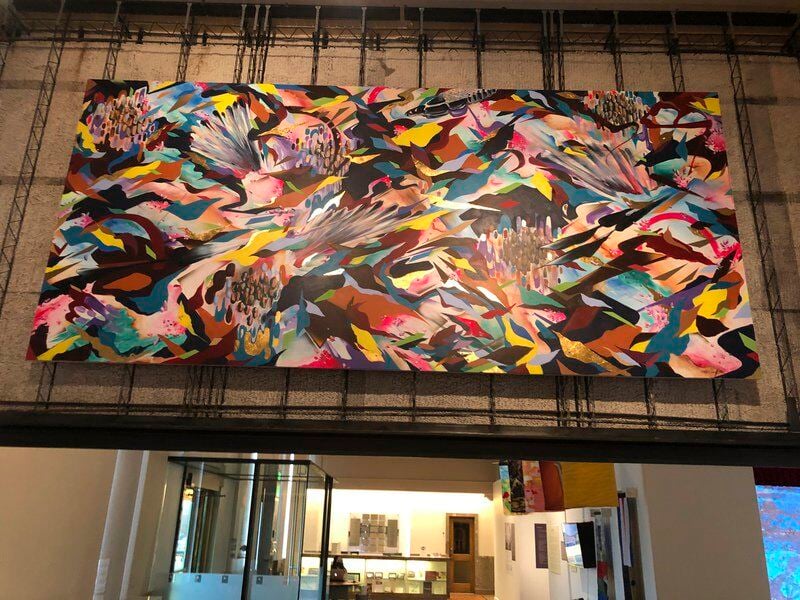 Tanner Holubar/Stillwater News Press Yatika Starr Fields (Osage/Cherokee/Creek, b. 1980), Connecting Roads from Past to Present, 2013. Collection of the OSU Museum of Art. 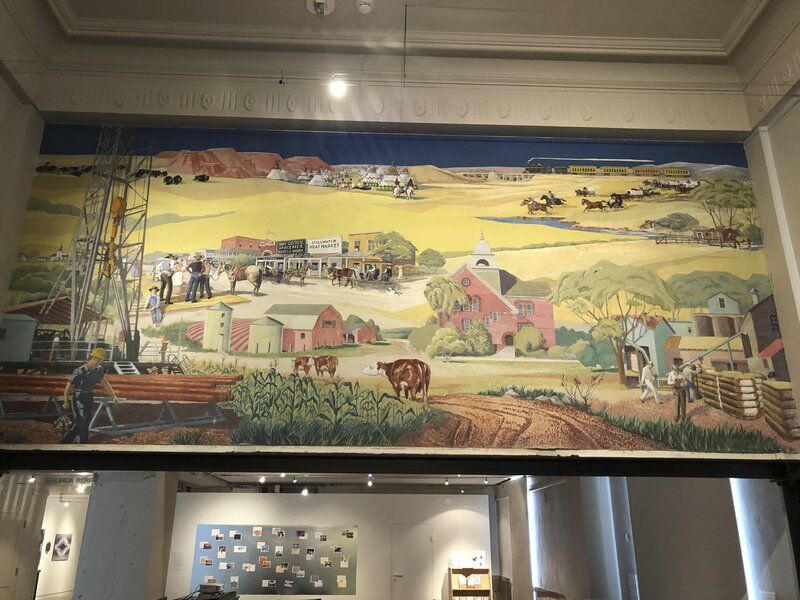 Tanner Holubar/Stillwater News Press Yatika Starr Fields (Osage/Cherokee/Creek, b. 1980), Connecting Roads from Past to Present, 2013. Collection of the OSU Museum of Art.

The Oklahoma State University Museum of Art is a fairly recent accomplishment that was decades in the making. Located at 720 S. Husband St. near downtown Stillwater is a building that has a long history. It was originally built in 1933, serving as the Stillwater Post Office until 1978.

The building currently pays homage to that history, with many of its interior walls in their original condition, contrasting them with later changes, which helps promote the history of the building in an artistic way. This was done intentionally by Rand Elliott Architects, run by an OSU alum, who was hired to transform the building into being functional as an art museum. He left a lot of the exposed surfaces intentionally, and he did that with the intent of representing the symbolism of students continually developing. Their raw nature at OSU and as they learn they are constantly changing, according to Kristen Duncan, marketing and communications specialist.

She said honoring the architectural heritage of the building is a way of paying homage to the historical value of what the building itself represents.

“It’s so fascinating to just see the details of how he changed over the building,” Duncan said. “Of course, nothing is perfect, and because this was not originally supposed to be a museum, there’s always been struggles. One example would be that our lighting system is not typical for a museum standard.

“So there’s been challenges, but one thing that we find really important is that we honor the heritage of the building itself. Even during our last storm, it is an old building and needs to be taken care of, so it can cause some issues. We try to maintain it to the best of our abilities, because we believe there is quite a bit of historical value and it’s who we are.”

The creation of a permanent art collection on campus was a driving force to get the museum to the point it is at today.

There aren’t many records from the earliest days of the art collection, but it is assumed the first works of art to be added to the OSU art collection were in the 1930s under the tutelage of Doel Reed, who was head of the OSU art department from 1924-59. Reed gave many of his own works to the collection, including more than 200 print works. The gift later became part of the Gardiner Permanent Art Collection.

It was then proteges of Reed, including J. Jay McVicker and Dale McKinney, who were both responsible for overseeing additions to the collection. By the 1960s, the collection was formally recognized within the art department and was being displayed at the Gardiner Gallery.

It was then proteges of his, including J. Jay McVicker and Dale McKinney, who were also respsonsible for overseeing additions to the collection. By the 1960s, the art collection was formally recognized within the Art Department and was being displayed in the Gardiner Gallery.

Billy Joe “B.J” Smith became the first director of the Gardiner Gallery after he had studied under Reed and was asked to start at gallery on campus. He ran the project with a budget of $800 and put on multiple art shows a year. The permanent collection at OSU took a backseat to the temporary exhibitions that were on display and was essentially unseen by 2009.

A 1978 News Press story reported that there was hope for an independent art building to be built on campus. In 1981, F.M. “Pete” Bartlett donated $1 million for the renovation of Gardiner Hall into a state-of-the-art facility for the OSU Department of Art. It was also accompanied by the creation of Bartlett Art Collection Endowment Fund for the continued growth of the permanent collection.

More renovations were planned in the 1990s for expanded gallery and collection storage space, but those plans have still yet to come to fruition. The Gardiner Gallery is still limited by its location and climate control constraints to exhibit contemporary art, but is still very important to OSU’s art program on campus.

In 2010, efforts were started to try and regather the scattered collection and to make the collection accessible to students, faculty, outside scholars and community visitors.

The design phase of the museum began in 2012 and construction started the following year. It took a while to get the building to the standard of housing the collection and functioning as an art museum. One item of major importance was to have the right humidity and temperature conditions to house the variety of items in what has become a collection of more than 6,000 artworks. The museum opened in January 2014 with an exhibition entitled “Sharing a Journey.” The museum is now beginning its seventh year of operation.

As one enters the OSU Museum of Art, there is an opportunity to see a mural that has been hanging in its current location for nearly 60 years. Titled “History of Payne County,” the mural was commissioned in 1962 after the post office put out a call to artists to represent the history of the county. Grace Hamilton was selected, and finished her mural in 1963 after reportedly having done vast research on historic images and aspects of life in Payne County.

It was nearly taken down numerous times in the past, but Malinda Berry Fischer, for whom one gallery in the museum is named, took the lead on saving it, according to Associate Chief Curator and Curator of Collections Arlette Klaric.

In 2013, prior to officially launching, the OSU Museum of Art commissioned Yatticka Star Fields to create the mural that is on the opposite side of the same wall. He was on scaffolds and painted it there in the building. He called it “Connecting roads: Past to present” and it was his depiction of the history of Payne County. He has Native American cultural representation and he really wanted to represent Payne County and a history of Native Americans that was a little bit lacking in the other mural. He did it as a “response,” to Hamilton’s mural.

“I think the two have become staples of our collection,” Duncan said. “People expect to see them. We have never taken them down, but people come here to see them.”

One of the main purposes the OSU Museum of Art serves is to be able to provide an opportunity for students on campus as well as student groups from the community. Students can book appointments to study a particular piece of art, and Klaric said there is collaboration with a wide variety of majors on campus.

Duncan said it can help students learn how to look at art and how to determine the different perspectives and intents behind a given artwork.

“Because we are affiliated with OSU, we make the collection available to those who might need it for research or they might be able to put together something for their class,” Duncan said.

Klaric said the central mission of the museum is teaching, so it serves the campus, the local community and the region.

When the doors of the museum opened, there were around 3,000 objects in the collection, with much of it being art of African origin. Since 2014, there have been three major collections the museum has received. The first was around 750 drawings from Leon Polk Smith, a well-known artist from Oklahoma. Charles Little, who taught at OSU, donated a collection of around 1,200 Native American objects and George R. Kravis II, a native of Tulsa, gifted them a collection of 600 objects of fine art and industrial design.

“We’ve literally been flooded with artwork. It’s absolutely extraordinary that we’ve been able to do this,” Klaric said. “We have done it because of the generosity of patrons and supporters and OSU alums who have been very generous to us. I’ve worked in other museums in other places, and I’ve never seen anything like this for a startup museum.”

Duncan said it is not widely known how much time, thought and effort are put into an exhibition. She said it is all about trying to create the most engaging experience for people as possible.

“As a curator, when we’re planning for upcoming exhibitions, a big forethought is how to share a permanent collection in an engaging way,” Duncan said. “And then also touching on so many different styles of art, and so many different styles of material used. Some people don’t realize the forethought in the planning, the incredible amount of time and energy dedicated to thinking about an exhibition as a whole. How to educate the public and how to provide a really engaging experience for people when they come and visit, not just once, but every time they come back.”

The OSU Museum of Art is free and open to the public from 11 a.m. to 4 p.m. Tuesday through Saturday. For information on current or upcoming exhibitions or scheduling a guided visit, head to museum.okstate.edu.