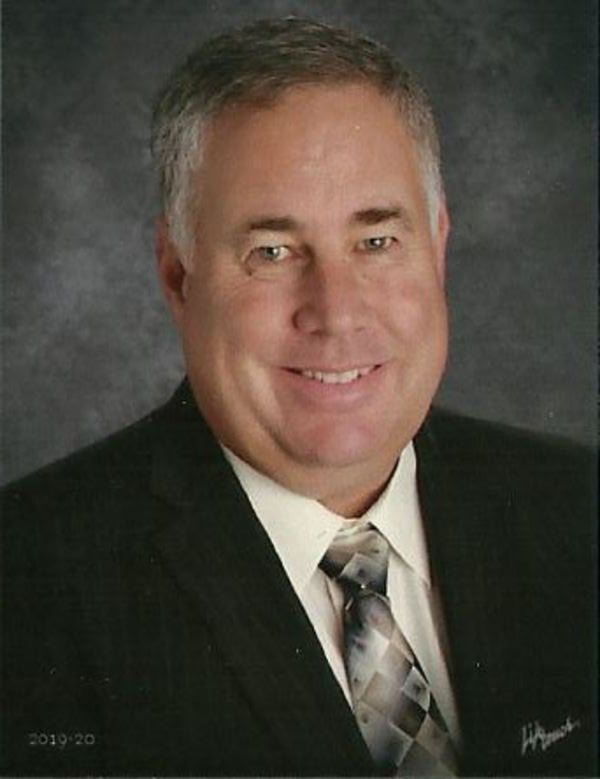 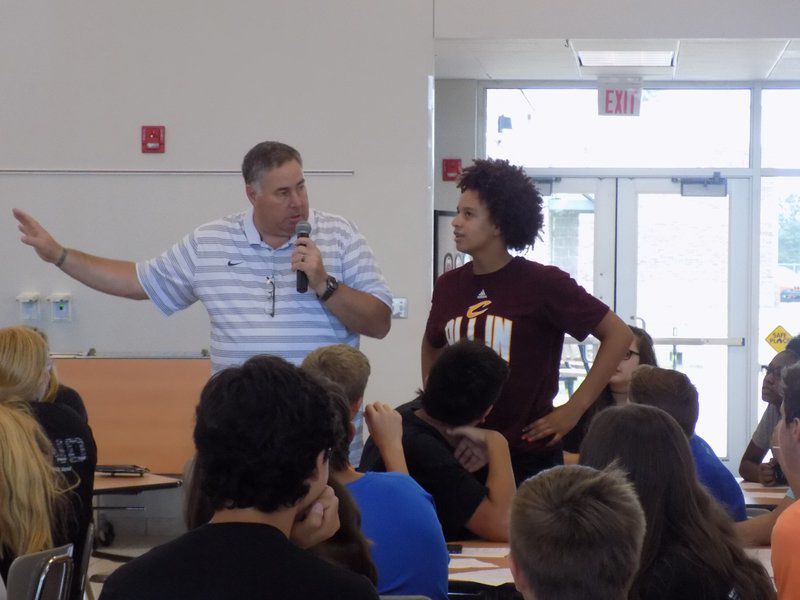 Courtesy of Joe McElroy Perkins-Tryon High School Principal Joe McElroy speaks at freshman orientation a few years ago. McElroy was recently named the successor to James Ramsey, who is retiring in the summer, as P-T superintendent. McElroy has been in education since 1991 and has been at P-T for five years.

Courtesy of Joe McElroy Perkins-Tryon High School Principal Joe McElroy speaks at freshman orientation a few years ago. McElroy was recently named the successor to James Ramsey, who is retiring in the summer, as P-T superintendent. McElroy has been in education since 1991 and has been at P-T for five years.

PERKINS - Everything Joe McElroy has ever done has prepared him for this moment.

McElroy, the principal at Perkins-Tryon High School for the past five years, was named the school district’s new superintendent last week. It is his first time being a superintendent, but he said he is up for the challenge.

“It is a big challenge. I have never done it before. I have heard people say, ‘Don’t ever take a job you know you can do because you won’t do your best,’” McElroy joked. “I am scared. It is a big step. This is a big school for your first time being superintendent.”

He has some big shoes to fill as he is taking over for James Ramsey, who is retiring this summer after 15 years at Perkins and another 20 years as an educator at Carney before that.

McElroy enjoys being a part of a school district that is growing rapidly, with new homes being built in the area seemingly every day. It is a far cry from where he grew up in southwestern Oklahoma where he admits there seems to be fewer and fewer people all the time.

“I saw the problems of schools getting smaller and having to get rid of teachers and towns dying,” McElroy said. “So, obviously, it is good to be on the other side of that, growing. I think our school still has a small-town feel and that is important to the people of this community. As we begin to get more and more people moving into the community, it is going to be hard to maintain that.”

McElroy grew up in the Frederick area and attended school in Davidson, just a few miles from the Texas border. After he graduated, he decided he wanted to go into accounting and get rich, but after a few classes, McElroy said it wasn’t for him. He loved to help others, though, and decided his true calling was teaching.

“I really have a passion about helping kids,” McElroy said. “I like being around kids. When I have a bad day here, they know because I will be hanging around a lot and popping in and out of classrooms because the energy the students have is great and they have all these wins going on and I can share in those victories with them.”

McElroy got married in 1985 and earned his teaching degree in 1990, starting his career in 1991. He and his wife, Charmin, taught in Frederick for 19 years. While there, McElroy learned a lot about being an administrator by being a coach, as well as a teacher, and always looking to learn more.

“Everything that you do in life prepares you for your next step,” McElroy said. “You never know what it is going to be. Team building is the same thing as getting a group of teachers together and leading those teachers and getting them on the same page. As a coach, there are parent issues and problems with the teams and things you do wrong that you have to stand up and talk about. I brought that with me into the principal role. I am not afraid to think outside the box if it is going to help kids. I think coaching helped me to be flexible.

“I have used a lot of things I learned as I moved into administration. If you don’t have rules and standards, you don’t have a team. So as a principal and moving forward as a superintendent, it will be important for me to set that tone and make sure our people get to that level where everyone is doing the right thing for every one of our kids.”

McElroy and Charmin felt after 19 years that it was maybe time for a new challenge. Both of their kids were out of the house with son, Codey then playing baseball at the University of Texas, and daughter Courtney in medical school in Tennessee.

A principal position was open in Agra, and though the couple had never heard of the small town, they decided to make the move.

“We never heard of it and didn’t know anyone within 60 miles,” McElroy said. “We just moved here and it is so not like us. We lived in the same house for 19 years and knew everyone. We did that as a chance to grow and I think we are ready to grow again.”

The first night in the little Lincoln County town was a tough one for McElroy, but it was a crucial moment in his career. There was a car wreck involving some students who were on their way to enroll at the school.

“It put me in a position where I was very close with that community,” McElroy said. “I feel like there was a great bond between me and the people there.”

McElroy spent three years in Agra and loved being at the school, getting to learn the ins and outs of being a principal while also getting to know everyone in town.

The transition to P-T was a bit of a drastic one, but McElroy was always up for a challenge and throughout his time, he has seen the school continue to grow.

“Then I came over here and it was very different here than it was in Agra, but kids are kids are kids and school is school is school,” McElroy said. “It is the same thing. I just applied it here. The thing in Agra that taught me was that I could be who I am and continue to be successful as a principal. I brought that here. I think the thing that most people in Perkins will tell you about me is you know what you will get from Joe every time because he is who he is every time.”

A few years ago, Ramsey told McElroy he was probably going to retire soon, so last year, McElroy became the assistant superintendent to learn the ropes a bit. Now that he has been officially named the successor, he is excited to see what can happen in his tenure.

“Mr. Ramsey has done a real nice job of doing what he can to prepare me for the position,” McElroy said. “The school is in pretty good shape financially. He has done a good job of getting us to where we are, the buildings are in really good shape. We are finishing a new intermediate school. We should be in pretty good shape building wise going forward. He leaves it in a really good place which means he leaves really big shoes to fill.”

Although P-T will probably move up a classification or two in the next decade, McElroy is confident that it will maintain the hometown feel the school already has. And he thinks the school will continue to compete with schools its size in Oklahoma City and Tulsa because academically, athletically and agriculturally, they already are.

McElroy has seen the teams for girls’ basketball, baseball, softball and football make huge strides in the five years he has been there. The school band “The Midnight Regiment” has won sweepstakes six years in a row and the FFA Chapter is thriving.

“There are a lot of really good things going on here and we have found that sweet spot to be successful,” McElroy said. “We have had some kids go out of here and do some pretty cool things academically and going back, the president of Baylor University is a Perkins grad so that is the kind of academic background we offer at this school. It is a pretty exciting place to be.”

It is truly something that McElroy said he will enjoy doing. Charmin, who is the middle school counselor, supports his decision to take the job and the two parents have already seen their kids succeed in the working world. Courtney is a physician assistant in Lawton and Codey plays tight end for the NFL’s Tampa Bay Buccaneers.

Although McElroy will be in a different office and won’t be around the kids as much, he said he will definitely try to be as personable as a superintendent as he was being principal.

“I will still be fighting battles to help those kids at a different level and that is what I hope to do,” McElroy said. “It is what it is about. You have to be around them to know what they need. It is important they know that the guy at the top cares about them on a personal level.”

Bob L. Barnes, 94, passed away at his home in Stillwater, Oklahoma, on March 25, 2020. A Celebration of Life will be held at a later date. Strode Funeral Home is in charge of arrangements.