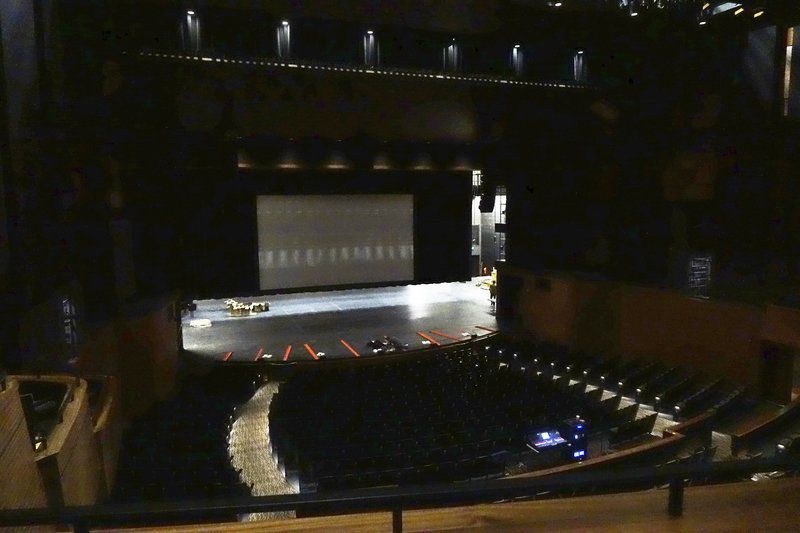 Tanner Holubar/Stillwater News Press The interior of the McKnight Center for the Performing Arts is nearly complete, and the final preparations are being made for the inagural season opening night on Oct. 11 featuring the New York Philharmonic.

Tanner Holubar/Stillwater News Press The McKnight Center for the Performing Arts at OSU is nearly complete, save for some final preparations being made to the exterior.

Tanner Holubar/Stillwater News Press The interior of the McKnight Center for the Performing Arts is nearly complete, and the final preparations are being made for the inagural season opening night on Oct. 11 featuring the New York Philharmonic.

Tanner Holubar/Stillwater News Press The McKnight Center for the Performing Arts at OSU is nearly complete, save for some final preparations being made to the exterior.

When Billie and Ross McKnight gave a $25 million gift to establish an endowment for programming to Oklahoma State University in 2016, it established that Stillwater would be host to a hub of performing arts culture.

With the McKnight Center for the Performing Arts now one month away from the New York Philharmonic’s facility-opening performance, a culmination of a goal of OSU President Burns Hargis has been achieved. Hargis had a vision to help strengthen the OSU brand by building stronger arts cultural offerings on campus.

“It’s about programing, and that has really been led by two alumni of the university … Billie and Ross McKnight. They gave a significant gift to create an endowment, specifically for programming, and the university has been working over the last two and a half years to match that gift,” Marilynn and Carl Thoma Executive Director of The McKnight Center Mark Blakeman said. “So when the facility opens next month, we will have a $50 million endowment, the interest of which specifically goes toward programs. So it’s not good enough to just have a state of the art facility if you don’t have something equally as compelling artistically to put in it. The public, the experience, the setting in which they have those arts experiences is integral to the overall experience that we want to have.”

Blakeman said there is an estimated $11 million economic impact the McKnight Center will provide during its inaugural season. It will provide something Stillwater hasn’t seen before, and will help OSU become a leading regional cultural organization as it brings in world-class performances to a town of 50,000 people, which is a rarity for a town of that size.

“We’re a community of 50,000 … we have a reach that’s much broader than that, but for a city of this size, we simply would not be able to have acquired the level of world-class artists that we’ll have for the opening season if not for the endowment,” Blakeman said.

The McKnight Center opens its doors for the New York Philharmonic, set for three-consecutive nights of concerts beginning Oct. 11 with an opening gala. Performing alongside the Philharmonic will be soprano singer and Oklahoma native Kelli O’Hara. The Center will then host numerous other performances through April.

“We worked very hard provide some diversity in our programming,” Blakeman said. “We have 25 concerts, which to some people sound like a lot, but in the grand scheme of things it’s not. We focused on quality of performance over quantity. We will learn over the course of several years what types of performances work well in the center. We also will be learning based on how people buy tickets, which programs might be more popular.”

The McKnight Center is nearly complete, as the last installments of necessary equipment are being delivered and installed and the finishing touches being put on the exterior of the location. The box office is now up and running, and hirings are being made for positions to help in the running of events. There are a few shows that are currently sold out, but Blakeman said there are thousands of tickets left for the season as a whole. Tickets are expected to go quickly as events come closer to occurring, and tickets can be purchased at the McKnight Center box office or by visiting mcknightcenter.org.

With Stillwater being a town smaller than where these types of acts normally perform, the size of the McKnight Center will provide a more close look for those in attendance.

“One of the things that’s wonderful about the center is the intimacy of the performance spaces,” Blakeman said. “We have 1,098 seats in our performance hall and 217 seats in our recital hall. Both of those spaces, I think, are appropriately sized for the size of our community here, but they’re significantly smaller than performance spaces you see in other parts of the country. We believe that we can provide a level of arts experience that you can’t get anywhere else because of the intimacy of the spaces.”

Betty Martin Taylor of Minco, Oklahoma passed away on January 12, 2020. Betty was a graduate of Yale High School and Oklahoma State University. She was predecased by her parents Mary and Cecil Martin of Yale and is survived by her husband Dan Taylor of Minco, daughter Sauny Shedeck, son Scot…