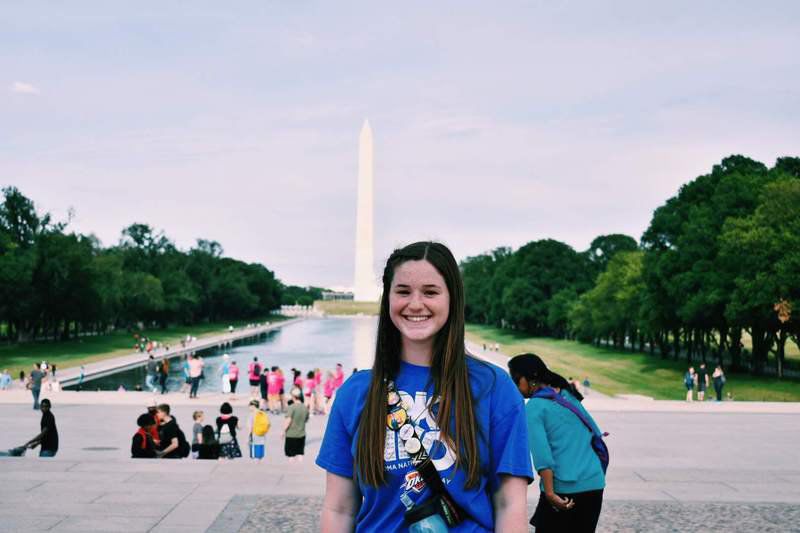 Courtesy of Kaylyn Raper Morrison High School senior Kaylyn Raper stands at the National Mall in Washington, D.C. after being a qualifer for National History Day last year. She also qualified this year and recently was a recipient of the prestigious Billy Michal Student Leadership Award. 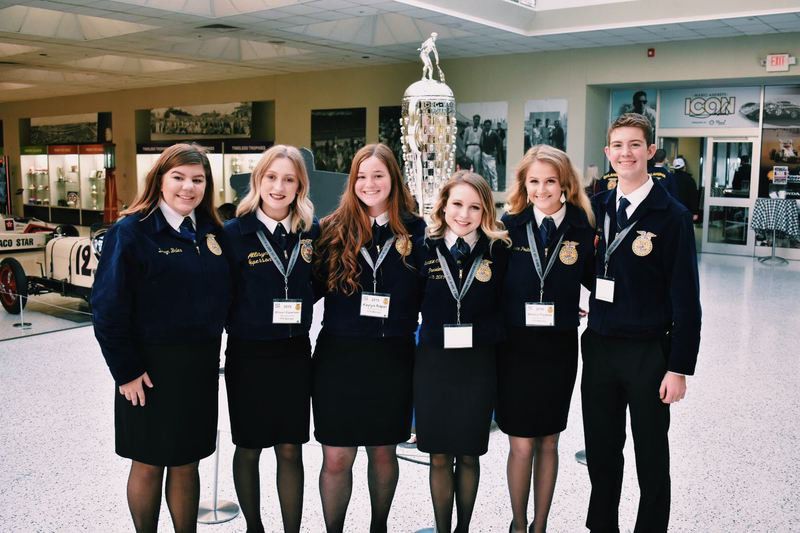 Courtesy of Kaylyn Raper Morrison High School senior Kaylyn Raper (third from left) with the FFA team at the National Convention. She is the chapter secretary. She recently was a recipient of the prestigious Billy Michal Student Leadership Award from the National World War II Museum in New Orleans. 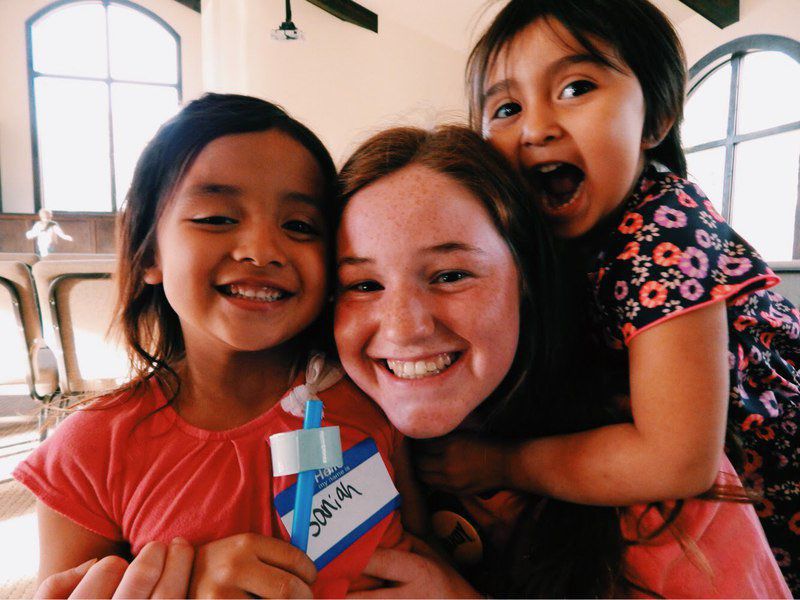 Courtesy of Kaylyn Raper Morrison High School senior Kaylyn Raper has put in over 600 hours of community service, including every year with her youth group at the Arms of Hope Children's Home in Medina, Texas. She recently was a recipient of the prestigious Billy Michal Student Leadership Award.

Courtesy of Kaylyn Raper Morrison High School senior Kaylyn Raper stands at the National Mall in Washington, D.C. after being a qualifer for National History Day last year. She also qualified this year and recently was a recipient of the prestigious Billy Michal Student Leadership Award.

Courtesy of Kaylyn Raper Morrison High School senior Kaylyn Raper (third from left) with the FFA team at the National Convention. She is the chapter secretary. She recently was a recipient of the prestigious Billy Michal Student Leadership Award from the National World War II Museum in New Orleans.

Courtesy of Kaylyn Raper Morrison High School senior Kaylyn Raper has put in over 600 hours of community service, including every year with her youth group at the Arms of Hope Children's Home in Medina, Texas. She recently was a recipient of the prestigious Billy Michal Student Leadership Award.

Kaylyn Raper earned a prestigious national award that she didn’t even apply for.

The Morrison High School senior has been announced as a recipient of the Billy Michal Student Leadership Award from the National World War II Museum in New Orleans, Louisiana.

Raper said the announcement was out of the blue because she never remembered filling out an application for it.

First, she asked Patty Sanders, her English teacher at MHS who is also in charge of National History Day for the school. Sanders told her she didn’t nominate Raper for it. But then, Raper had a thought.

She had an inkling it might have been Sarah Dumas, the Director of Education for the Oklahoma History Center and the State National History Day Coordinator.

Turns out, Raper was right.

“I never even applied, I just got nominated, so it was a cool surprise to get this award,” Raper said.

The Billy Michal Award is given out annually to one student in every state who has maintained a strong record of volunteerism, demonstrates school and community activism and helps implement creative solutions to recognized problems.

Raper was supposed to go to New Orleans and participate at the Museum’s American Spirit Awards on June 11-12, but because of the outbreak of COVID-19, the program was canceled.

The award was created in honor of Billy Michal, who was a child living in Louisiana during World War II. At only 6, Michal helped his one-room school win a statewide scrap metal-collection contest during the war, proving that every citizen could contribute to victory.

Raper has been to the Big Easy before, going to see Oklahoma State play Mississippi in the 2016 Sugar Bowl, but she never got the chance to visit the prestigious museum there.

With all the travel Raper does for her volunteerism, she will probably find her way down there again someday, though.

She has put in more than 600 hours of community service, including the Arms of Hope Children’s Home in Medina, Texas; the Memphis Work Camp and the West of Heaven Youth Camp in Stillwater.

“I do a lot of that kind of stuff with my church. My youth group started going to Medina, Texas, every year for spring break on a mission trip and then that really sparked my interest,” Raper said. “It was such a good trip learning how to give back, even if it’s not in your community, but just giving back. A lot of my stuff is in my youth group. We also do volunteer stuff with FFA and sports so it was already in the groups that I am in.”

Raper, who is a member of the Stillwater Church of Christ’s youth group, said she enjoys getting to go on these mission trips to help out and loves to meet new people.

“We just love them and treat them how God will treat them,” Raper said. “I also go to Memphis every year on a mission trip and we paint houses for lower income people inside inner city Memphis. That is really fun, too. It is one of my favorites because we go and you are in one group with nobody else that you know so it is all kids from a different youth group. So it is people that you have no idea who they are and you spend a week painting a house and the next thing you know, you are best friends. It is a mix of stuff, but just whatever I can do. I always have a good time when I can do it.”

Not only is she out in the community most days, but she is also uber successful in the classroom and in athletics.

She was the News Press All Area Softball Player of the Year last fall for the first-time state champion Lady Wildcats, an All-State selection as well, while also helping turn the basketball program into a winning one. In the classroom, she is the co-captain of the Quiz Bowl team, which earned state runner-up in 2017 and the chapter secretary for Morrison FFA while also earning a 35 on her ACT.

Recently, she was named an Academic All-Stater and one of Oklahoma’s top 100 public high school seniors.

MHS principal Nicholas Hoover said it is very rare to have a student who has achieved what Raper has and who continues to excel everywhere she goes.

“I have never seen anyone so well-balanced,” Hoover said. “Someone who is so high academically and being able to accomplish All-State as an athlete. Never had the whole package like that.”

Raper’s favorite subject isn’t actually even history; it’s math. However, after Sanders convinced her to try out for the National History Day program, Raper immediately took to it and succeeded at it, as well.

“It is basically a history project and you can choose whatever you want to do. You can do an exhibit, documentary, website and you can choose your topic,” Raper said. “It is really interesting. I did one my sophomore year about the Marshallese Islands in Enid and then eugenics during World War II the next year. It wasn’t really one of my interests, but I do like English a lot so it is a lot of writing and it is a research project.

“It is really interesting to me to be able to learn stuff that wasn’t in our normal curriculum because all the things I have done in those projects have been things that I never really heard of in my normal classrooms. That is how I got into it because I like to learn, so that was really cool.”

A two-time national qualifier for NHD, Raper earned the chance to go to Washington, D.C., and she loved it. Despite the event being online early this year because of the coronavirus, Raper still appreciates she was able to go to the nation’s capitol and see such attractions as the U.S. Holocaust Memorial Museum, which stood out to her.

Raper is planning to attend OSU and major in accounting, hoping to add another major along the way. At 17, she is still thinking about what to have a career in, but she has become interested in possibly managing budgets for nonprofit organizations because of her work in volunteerism.

Coming out of a small town like Morrison, Raper said she shows that it doesn’t matter where anyone is from, they can still accomplish a lot.

“I think it has always been my mindset that there is no reason that I can’t go out and accomplish these things in sports or academics or even community service,” Raper said. “Just being able to have that support from my community. It is cool to me to be able to win all these awards and championships because I know that it means a lot to the people in my community and town who have always supported me. That is what it means to a small town kid. Accomplishing things is not just for you, it is for your whole community.”