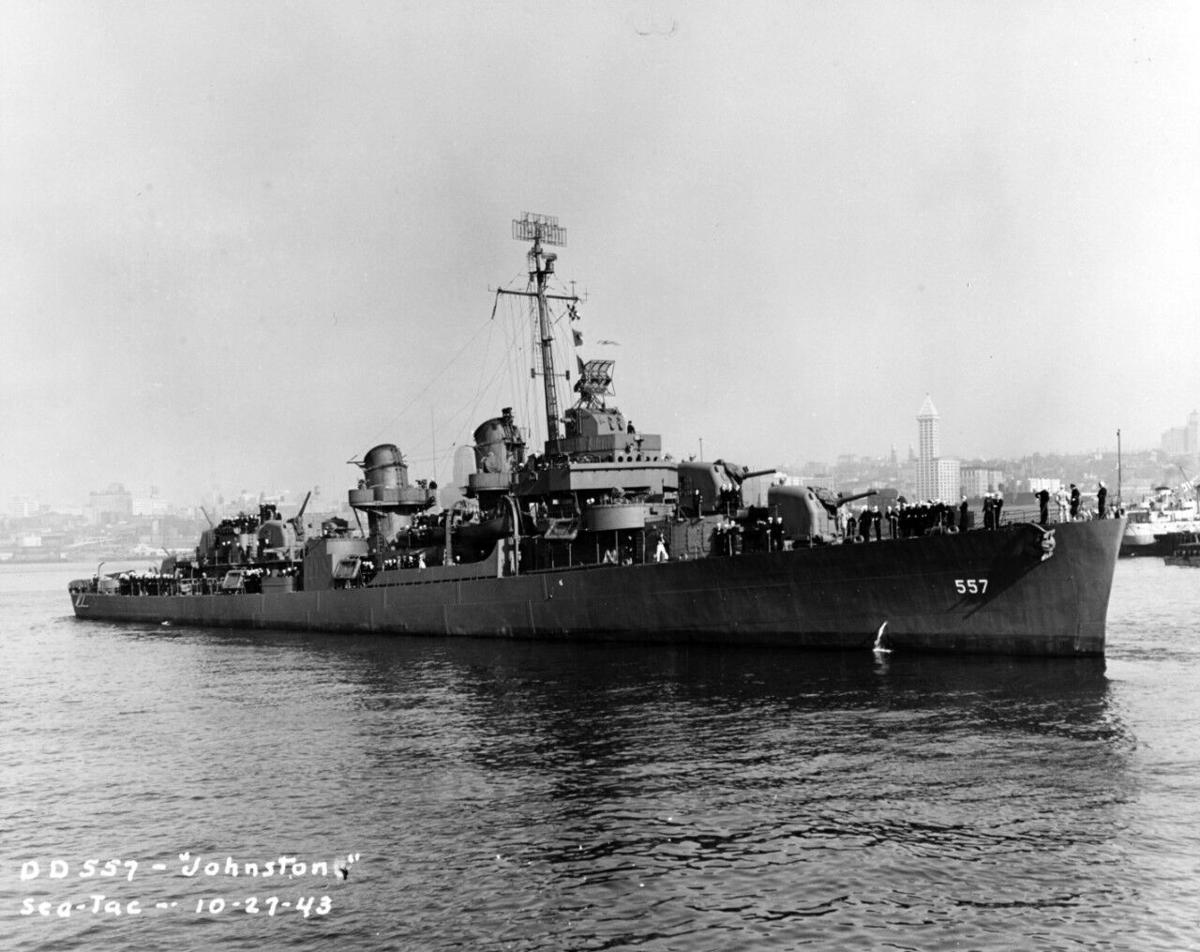 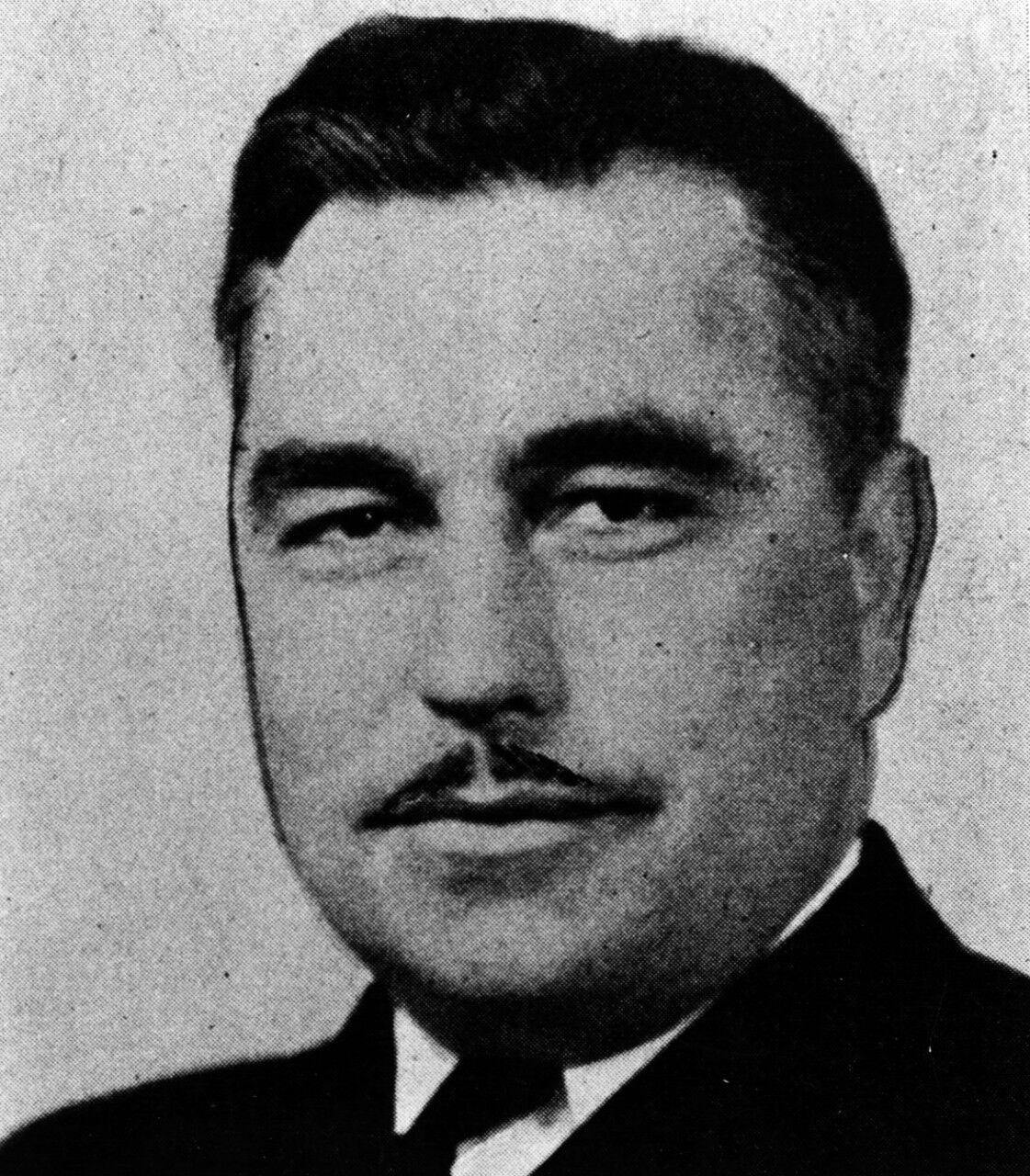 Commander Ernest Edwin Evans, USN was awarded the Medal of Honor for giving his life as Commanding Officer of USS JOHNSTON (DD-557) during the battle off Samar, 25 October 1944. 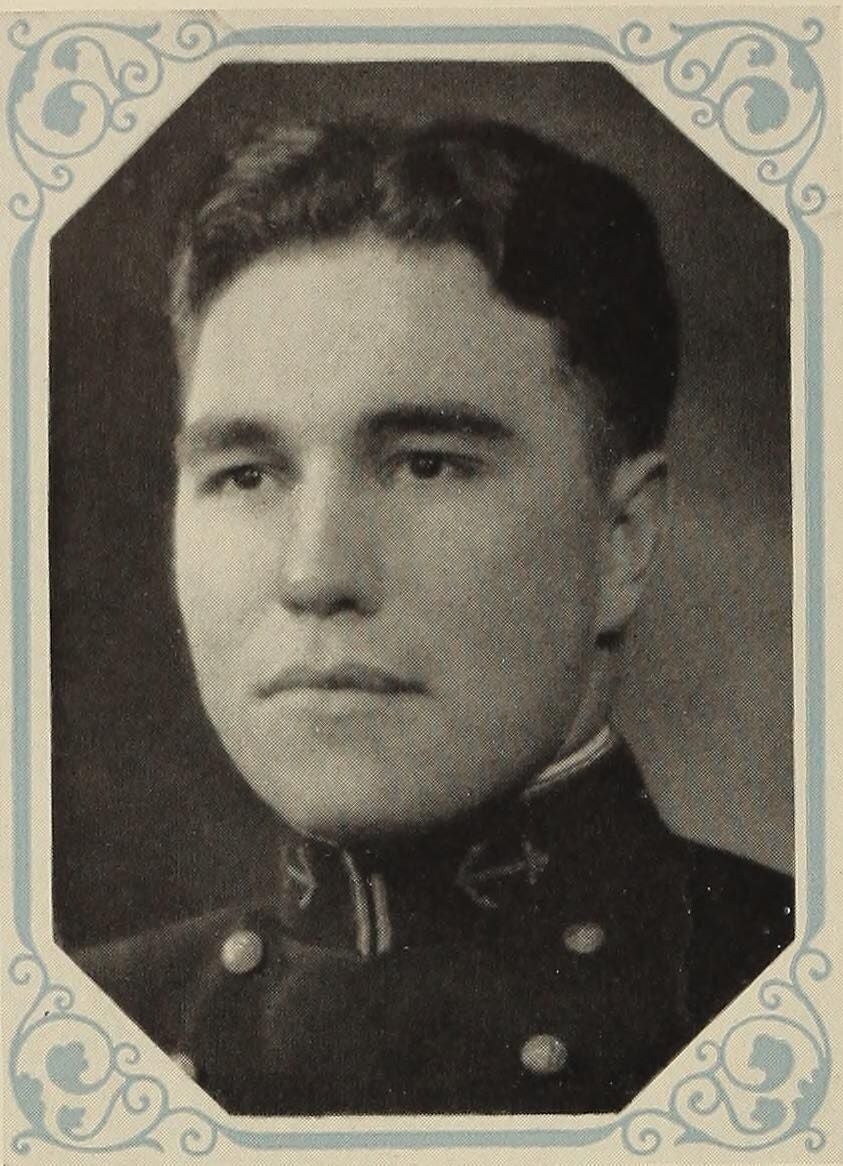 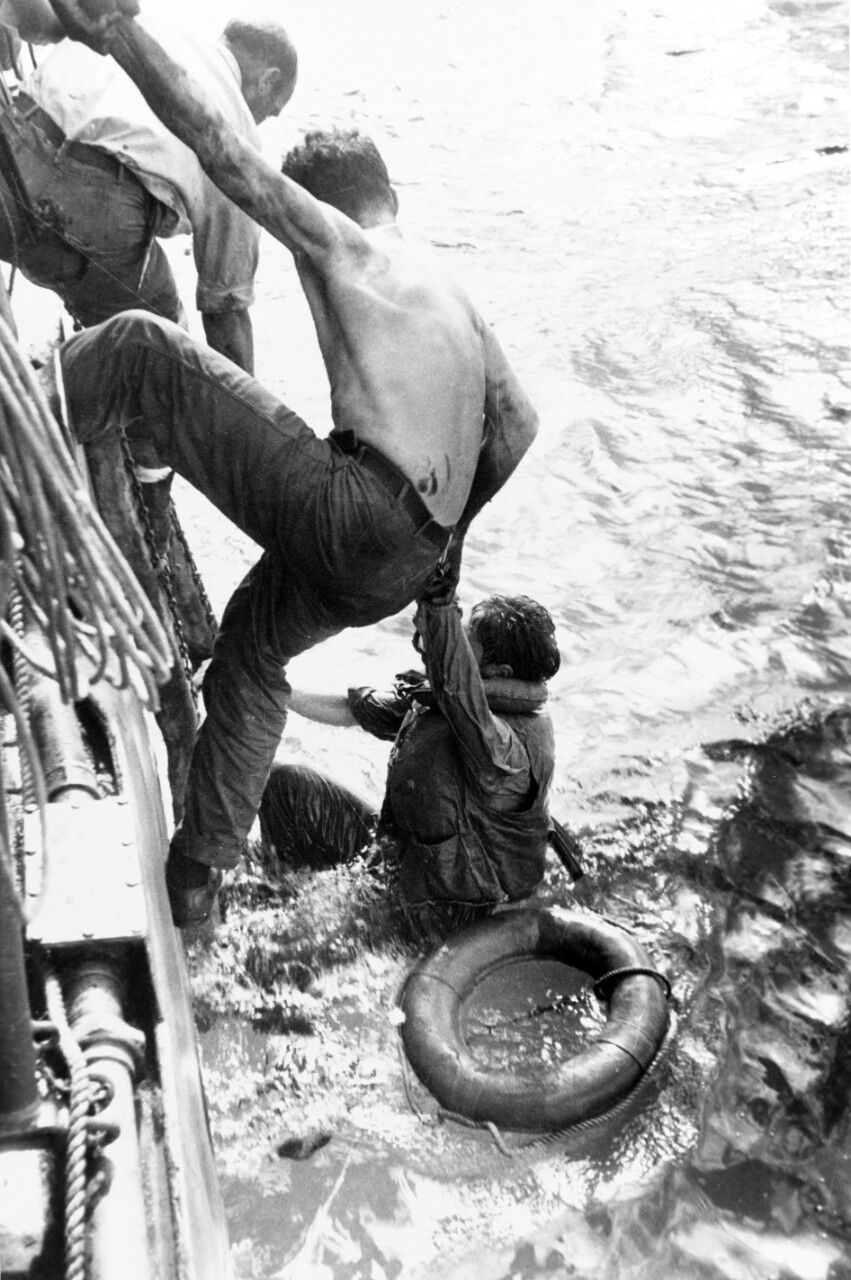 Survivors of the Battle of Leyte Gulf being rescued from the water on Oct. 26, 1944. 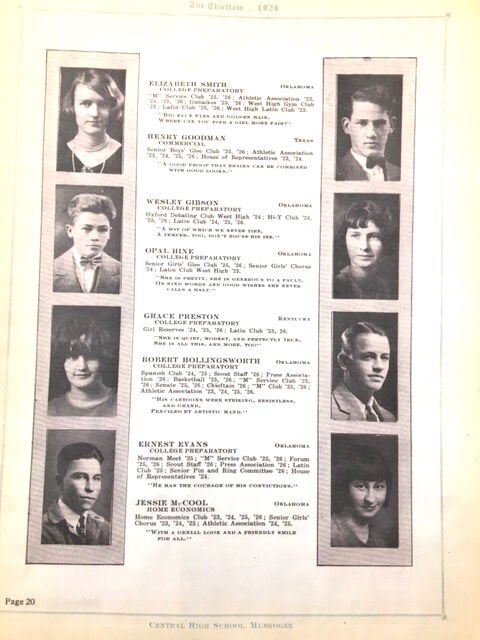 Cmdr. Ernest E. Evans graduated from Central High School in Muskogee with the Class of 1926. Although he doesn't seem to have family left in the area, there is an effort underway to build a memorial to him in Muskogee's War Memorial Park.

After more than 75 years, the wreckage of the USS Johnston, a Fletcher-class destroyer that sank while taking on a line of Japanese warships during the Battle of Leyte Gulf during World War II, has been located.

A section of wreckage on the ocean floor was positively identified as belonging to the Johnston after images taken by the undersea technology company Caladan Oceanic showed the ship’s hull number, 557.

Wreckage thought to be from the Johnston was originally located in 2019 more than 20,000 feet below the ocean’s surface on the edge of an undersea cliff in the southern part of the area where the battle took place. But the number and other identifiers couldn’t be seen.

The Johnston’s hull was later found further down the cliff face at about 21,180 feet.

At the conclusion of the expedition, the Caladan Oceanic team brought their surface vessel DSSV Pressure Drop to a stop in the vicinity of the battle, sounded the ship's whistle, and laid a wreath in honor of the lives lost there, Caladan Oceanic leader Victor Vescovo said.

The Battle of Leyte Gulf, said by the U.S. Department of Defense to be the largest battle of World War II, was fought near the Philippine islands of Leyte, Samar and Luzon with more than 200,000 personnel taking part.

Cmdr. Ernest E. Evans and the 327-man crew of his ship, the Johnston, were part of a small group of destroyers that took on a superior Japanese force on Oct. 25, 1944, during the Battle off Samar, part of the Allied invasion to reclaim the Japanese-occupied Philippine Islands and control the Pacific.

Evans' ship was the first to launch what has been described as an aggressive torpedo attack against the much larger Japanese flotilla made up of four battleships, including the super-battleship Yamato, six heavy cruisers, two light cruisers and three destroyers.

The Japanese thought they were pursuing the U.S. Third Fleet.

Accounts of the battle say Evans knew the smaller group of Allied forces about to run into the Japanese ships would be destroyed, so he didn’t wait for orders to attack.

Author and military historian Ian Toll called it a "David versus Goliath" battle, "where you have destroyers and destroyer escorts taking on the largest Japanese warships in the world."

The Japanese fleet included the Yamato, one of the heaviest and most powerful battleships ever built. The USS Johnston was 2,700 tons, and armed with five-inch guns, compared to 72,000 tons and 18-inch guns for the Yamato.

As the ship in the rearguard position, the Johnston was closest to the Japanese fleet, and at one point turned into the fleet in a frontal charge, firing its guns and torpedoes, the latter of which hit the Japanese heavy cruiser, Kumano, knocking her out of action.

In turn, the Johnston was hit by three of the Yamato's 18-inch guns, causing extensive damage, explosions and fires. Additional fire from smaller guns on the Yamato caused more damage, including injuring Evans, who was burned and bleeding at one point, yet refused medical treatment to continue leading his destroyer. The Johnston continued firing, even though crippled, and soon observed the USS Gambier Bay, an escort carrier, that was dead in the water and taking fire from the Japanese fleet.

Evans ordered the Johnston to intervene and draw away the shells from the Gambier Bay and toward his own destroyer, taking more hits, but continued firing back at the larger Japanese fleet.

The Naval History and Heritage Command issued a release Thursday announcing the identification of the USS Johnston and describing how it was lost.

“Heavily outmatched, Evans gave the order to attack a major portion of the Japanese fleet. Although Johnston had hit a heavy cruiser which was forced to retire, enemy shells managed to strike the Johnston causing widespread damage and casualties. Evans himself was seriously wounded. Despite the grave damage, no torpedoes remaining, and reduced speed and firepower, Johnston commenced a second attack firing 30 rounds into a 30,000-ton Japanese battleship."

Evans is said to have made a vow during the Johnston’s commissioning ceremonies to never run from a fight.

“This is going to be a fighting ship,” he said. “I intend to go in harm’s way, and anyone who doesn’t want to go along had better get off right now.”

Evans was injured early in the battle, but witness accounts say he made it off the ship before it sank, about three hours after it began its attack.

At first, Toll said, Japanese sailors fired down on the Johnston's crew, now in the water and in lifeboats. They were ordered to stop shooting by their own officers.

"There are eyewitness accounts of the Japanese saluting. I think it is clear they were immensely impressed," Toll said.

Of the 327 souls aboard the Johnston, 186 were lost during or after the battle and 141 survived, according to the U.S. Navy. About 50 were killed by enemy action, 45 died on rafts from battle injuries and 92, including Evans, were alive in the water, but were never seen again.

Many of the Johnston's crew died of exposure in the water, drowned or were eaten by sharks. On Oct. 26, the survivors were picked up by American rescue craft; Evans was never found.

Oklahoma born and believed to be a Native American of Muskogee Creek and Cherokee descent, Evans was posthumously awarded the Medal of Honor.

He was the first Native American in the Navy and one of only two destroyer commanders of World War II to be so honored, according to the Naval History and Heritage Command.

Evans' grandson Ernest E. Evans III said he chose not to follow his grandfather and his father Ernest E Evans Jr. to a career in the military, although he was the third generation to be accepted to the U.S. Naval Academy.

His name would have been a heavy one to carry, given his grandfather’s legacy, he said. It certainly had a major impact on his father who retired as a Colonel from the US Marine Corps.

While doing Information Technology work for the Department of Defense, Evans saw his grandfather’s name at the Pentagon in a memorial for those awarded the Medal of Honor.

He said it’s a meaningful experience for him when he sees those recognitions, but it still feels strange.

There is also a room at the Naval Academy named after Evans and a building at the Naval War College. The Navy named a Dealy-class destroyer escort, the USS Evans (DE 1023) for him.

During a 2009 Veterans Day Ceremony at Fort Gibson National Cemetery, Dusty Rhodes, a World War II veteran from Winfield, Kansas, who said he sailed with Evans on the Johnston, spontaneously stood during the service and asked people to pay tribute to his comrade, recalling his "barrel chest and barrel voice."

There is an effort underway to establish a memorial in Muskogee, where Evans graduated from Central High School in 1926.

Stephen Reagan, a veteran and retired dentist from Norman, was struck by Evans' heroism and courage after reading accounts of the Battle off Samar.

“To me, I just picture what went on there, the courage that took,” Reagan said. “I mean, it was a suicide mission. They didn’t have a chance … and boy, he never quit, never quit fighting. Even when they didn’t have any torpedoes left they were faking a run out there, shooting that five-inch gun. To me it’s a pretty amazing story.”

Reagan has commissioned a bust of Evans from sculptor Paul Moore and raised $5,000 of the $40,000 he estimates it will take to have it cast in bronze and mounted on a granite pillar with a plaque.

He hopes to place it in Muskogee in War Memorial Park, near the USS Batfish.