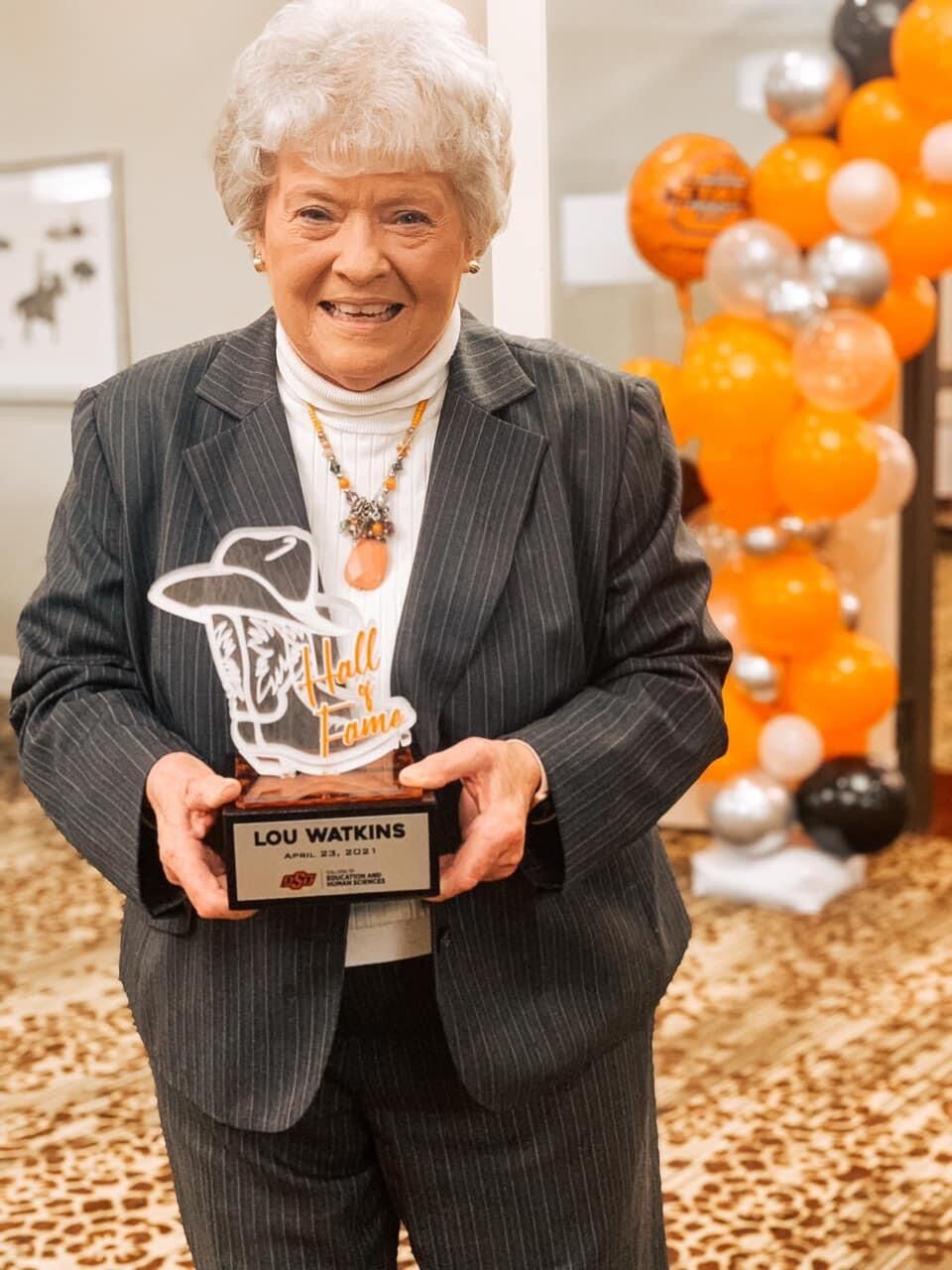 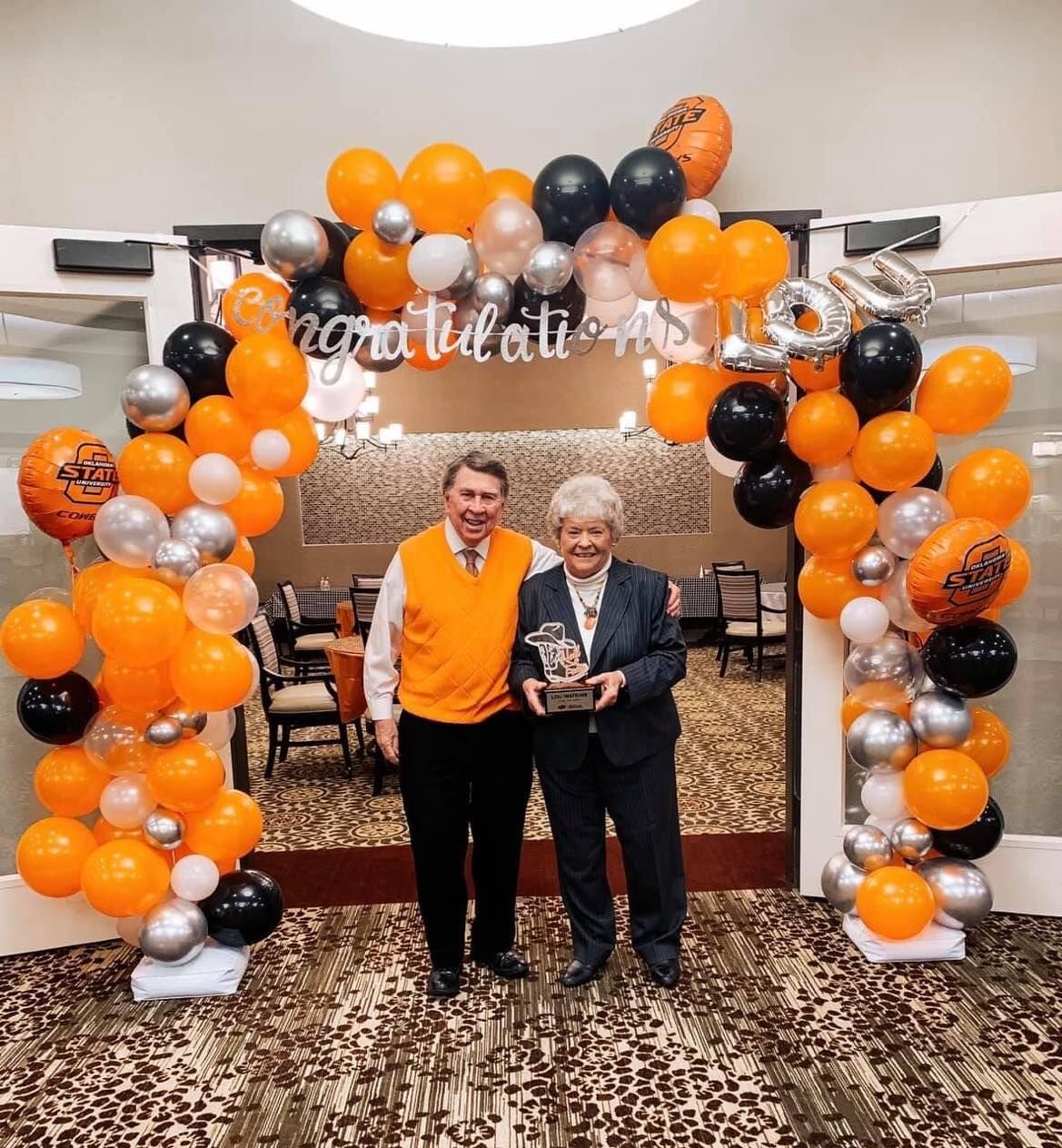 Five women, all distinguished alumni of Oklahoma State University, were recently honored by the OSU College of Education and Human Sciences.

Former OSU A&M Board of Regents member Lou Watkins, who grew up in Cushing and earned a bachelor’s degree in political science in 1964 and master’s degree in secondary education from OSU in 1966, was inducted into the College of Education and Human Sciences Hall of Fame in a virtual ceremony held Friday at Legacy Village of Stillwater, where she lives with her husband, former Congressman Wes Watkins.

Watkins said she was extremely honored, humbled and pleased to be selected for the hall of fame.

“I kept waiting for them to tell me they had mixed me up with someone else,” she joked. “But my name was on the award, so I guess it’s OK.”

She credits OSU’s grounding in the Land Grant tradition for instilling a sense of mission in her regarding public service.

Long before she met her husband, Watkins was active in politics, whether it was volunteering in a local mayoral race or working for someone seeking a higher office.

Earning a degree in political science didn’t translate to working in the political realm as neatly as one might expect, she said.

“Political science is very different from politics,” she explained. “Many political scientists have a disdain for politics and teach it from a very idealistic point of view, which I guess, is more about how it should be. But it isn’t very realistic sometimes.”

Although she hadn’t planned to become a teacher, Watkins said she pursued a graduate degree in education so she would be able to work wherever she and Wes wound up living after graduation.

But she soon discovered combining her passion for political science with a career in education gave her a sense of purpose as she helped students reach their full potential while teaching government, history and economics at Wilburton High School. She later joined the faculty at East Central University in Ada and would serve as the Department Head for Political Science.

“I absolutely loved it,” she said. “I was surprised how much I loved it.”

Watkins was a member of the founding board for Leadership Oklahoma and served on the Oklahoma Academy for State Goals board.

She was appointed to the OSU/A&M Board of Regents, serving three terms and a total of 23 years.

She and her husband have sponsored numerous OSU scholarships, and she is active in numerous volunteer organizations, including E-Angels, a group of volunteers who take care of student needs at Stillwater Public Schools.

“Her dedication to teaching, mentorship and service truly embodies the ‘Cowboy Code,’” the university said when announcing her induction.

Four other graduates received the Outstanding Alumni Award from the College of Education and Human Sciences.

Wilma Davis-Brooks earned her Bachelor’s degree in home economics education in 1964 and her Master’s in family relations and child development in 1972 at OSU. She teaches family and consumer sciences at Harold Murphy Alternative High School in Hobbs, New Mexico and with more than 50 years of experience, she is the longest-serving active teacher in New Mexico.

“Children are our world’s most precious resource. The future of the world depends on how children and young adults learn and how they apply their learning,” she said.

She has also been recognized as the 2012 New Mexico Educator of the Year, and in 2017, she was awarded the Governor’s Plaque and a State Senator’s Proclamation for Dedicated Service in Education.

Dial is the appointed Executive Officer of Integrated Services at the Chickasaw Nation, where she leads the innovative Zero Suicide framework into the healthcare and mental health teams. Her work with Zero Suicide has led to numerous awards, including two National Indian Health Board Local Impact Awards and semi-finalist honors for the Harvard American Indian Economic Development Honoring Nations Award in 2018 and 2020.

From 2010 to 2014, she served as the director of mental health and substance abuse at the Community Health Center of Lubbock. She was appointed to serve on the Oklahoma Suicide Prevention Council under Gov. Mary Fallin.

Dial is a member of the OSU Marriage and Family Therapy Alumni Board.

While an undergraduate student in 2007, she founded the nonprofit organization Upendo Kids to support orphaned children in her home country of Kenya. More than 20,000 orphans have received shelter, medical care and education from Upendo Kids, and 50 orphans currently live in the facilities full-time. In addition to Upendo Kids, Menja worked for four years as a foster care specialist for the Oklahoma Department of Human Services.

She has authored three books.

Donna Williams earned her Bachelor’s in apparel design from OSU in 1997 as the first honors degree graduate of the program.

She currently lives in Lakeville, Minnesota, where she is the senior project manager of apparel innovation and technology at Target Corporation, managing integration of 3D design technologies throughout the apparel division. During her first year alone with Target, she increased 3D technology adoption by 40%.

She is actively involved with the OSU Department of Design, Housing and Merchandising Advisory Board and the OSU Honors College Alumni Board.