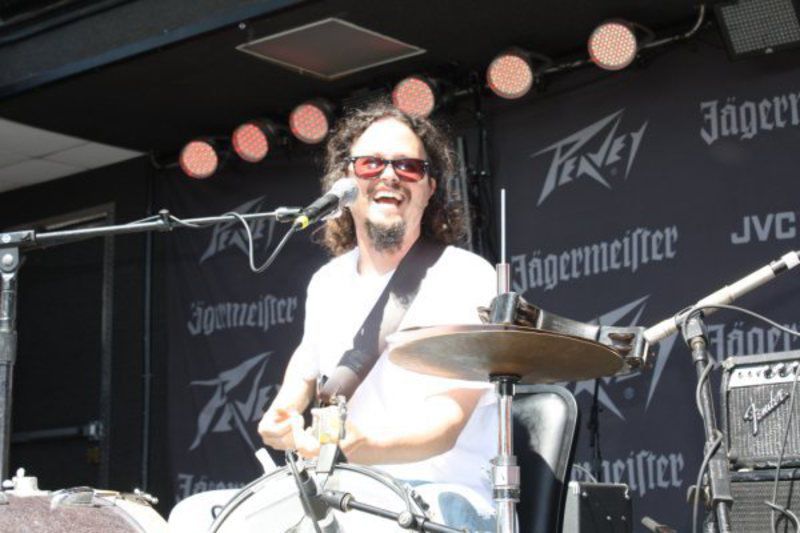 Provided Mike Hosty laughs while performing a concert. Hosty is one of many musicians who perform regularly in Stillwater who are looking for other ways to make ends meet. 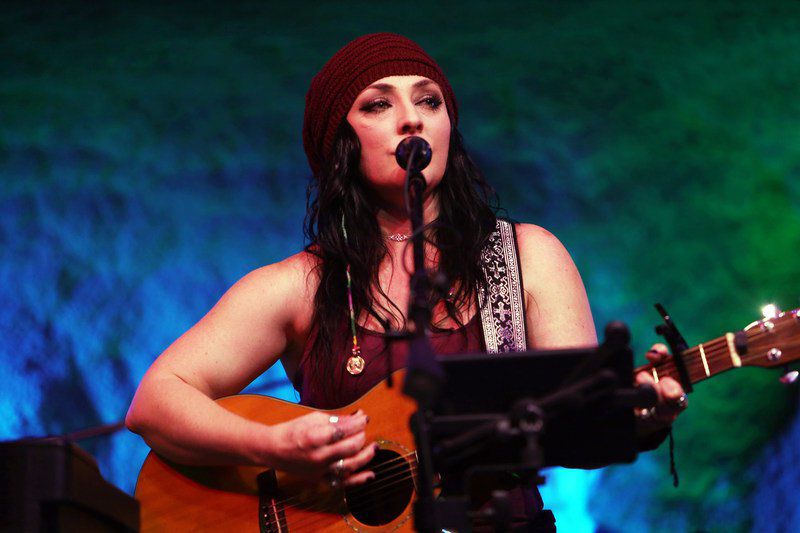 Provided Morgan Reynolds performs during one of her concerts. With no live shows to perform, Reynolds said she will attempt to perform virtual concerts on Facebook.

Provided Mike Hosty laughs while performing a concert. Hosty is one of many musicians who perform regularly in Stillwater who are looking for other ways to make ends meet.

Provided Morgan Reynolds performs during one of her concerts. With no live shows to perform, Reynolds said she will attempt to perform virtual concerts on Facebook.

Concert halls, arenas and other venues that are normally full of sound are currently silent. It is one of the many aspects of our daily lives that has been affected by the COVID-19 pandemic.

It has hit everyone in the music industry from musicians to the people who work behind the scenes. It has created situations in which people who make their livelihoods through their musical talents are having to either get creative with how they make money, or have something else to fall back on to have an income.

But in Oklahoma, there has been efforts to try and help the people in our state’s music industry. Red Dirt Relief Fund, a nonprofit dedicated to helping people in Oklahoma’s music industry, has granted $100,000 in one-time, $250 amounts to 400 recipients. An original goal to grant $50,000 was doubled after donations from the community and the George Kaiser Family Foundation.

Katie Dale, executive director of Red Dirt Relief Fund, said when other states started to cancel concerts and festivals, especially South by Southwest in Texas, they knew it was going to happen in Oklahoma before too long.

“We knew that that was the first wave, as tours were canceled, and large venues, events, gatherings, festivals started to cancel, we just decided to, which is our mission, to provide a safety net in times of emergency,” Dale said. “We couldn’t think of a more massive emergency than this one. So we dedicated $50,000 in $250 grants, first-come, first-serve.

“And we decided that we would create a threshold of $1,000 in lost wages from event cancellations. We had seen some other programs around the country doing something similar with one-time grants. It’s to help people keep groceries in their homes, as we try to figure out what the next steps are going to be and how long this may last.”

Those who applied for the grants were not solely musicians. Dale said there were applications from the Tulsa Symphony, church bands and from people who work throughout the industry.

“While it’s devastating, it’s also good to know that we started this thing eight years ago, so we were fortunate to kind of have the parameters in place to execute a program like this,” Dale said. “And that we meet our mission to serve everybody who’s in the businesses of making music in Oklahoma.”

A different beat to play to

Mike Hosty, a one-man-band who has performed at numerous places in Oklahoma City, Stillwater and around the state, said the toughest part of not being able to perform is missing out on the regular relationships he makes with people who attend his shows or work the venues.

“A lot of local performers, they depend on those venues,” Hosty said. "If you’re at home watching something on TV, and you have somebody who’s going to be playing Eskimo Joe’s on a Wednesday, are you going to watch them on their livestream or are you going to watch Garth Brooks doing his? So you have a whole new level of competition going on. There’s only so much time to listen and watch during a day. The worst part is just not being able to connect with all those people you know when you come into town, and you just can’t see them anymore.”

Hosty also said he can feel some satisfaction on a night where he performs and a bartender has done well on tips. He said by them doing well on tips, he felt he had contributed in a way toward helping them out with his performance.

“For me, I tell jokes and sing songs, and make people laugh,” Hosty said. “And not being able to do that, and not being able to go into those venues, is tough. But the even tougher thing is if we don’t do what they tell us to do, it’s going to be even longer.”

Hosty is a working musician but also works part time as an adjunct professor at the University of Central Oklahoma. He said he doesn’t make much doing that, and has also tried online lessons to make some income. But he said it is a difficult time to try to sell albums or CDs, especially with Amazon having recently limited new submissions by musicians.

“I’m just trying to take it as it comes. People say, ‘Oh, well you can sell records online.’ But nobody buys records anymore, and nobody buys CDs,” Hosty said. “Amazon has also restricted the amount of new submissions they’ll take to send out to people, because they’re focusing more on food and medicine, and things like that. So if anyone has a new album coming out in the next couple months, they’re not going to be accepting their physical albums to sell. And with streaming, I don’t know how you make money doing that. Unless you’ve already got millions of streams, you’re not making anything.”

Morgan Reynolds, who has been performing around Stillwater for many years, said having shows canceled recently is not like how it usually is when a gig gets axed. She said she is used to being able to reach out to other venues in Stillwater or elsewhere when a show was canceled, but not having other options to perform live has led her to attempt online shows to try to earn some money.

“I am a full-time musician, and it’s really my only job,” Reynolds said. “But I also act as my own booking agent and my own manager, so there’s a lot of things that I do behind the scenes that a lot of people don’t see. So I’ve been working on my website and getting ads and stuff on there, and getting things together to do a virtual concert and maybe try to get a little bit of virtual tip money that way.”

She said she has done videos for the web and has had some of her shows broadcast live on Facebook, but this will be her first time performing an online concert on her own. She said she plans to host the virtual concert at 8 p.m. Friday on her band’s Facebook page, which can be found by searching @themorganband on Facebook. Anyone interested in donating to Reynolds during the concert can do so by visiting 1.paypal.me/theMORGANband or on Venmo @theMORGANband.

“This will be the first one I’ve done by myself, so that will be interesting,” Reynolds said. “I think it’s going to go really well, from what I’ve gathered. I’ve gotten a really good response on Facebook, but I’m keeping my fingers crossed.”

Brad Piccolo, a guitarist and vocalist for the Red Dirt Rangers, is also involved with the Red Dirt Relief Fund. Piccolo said hard times bring out the best in everyone, and that he is proud to be involved with an organization that has made an effort to step up and try to offer a solution to help Oklahomans in the music industry.

“There are some beautiful things that are happening because of this pandemic,” Piccolo said. “Those beautiful things are how people have stepped up to help others, and I’m just proud to be a part of a solution to try to help.”

Piccolo said the efforts such as watching online shows and contributing donations go a long way toward helping those musicians.

“As musicians, often, we have the least to give, but often asked to give the most as far as benefits and all that,” Piccolo said. “Sometimes it’s not always money. We’re there for just support emotionally or financially, if we can. We’re all just doing the best we can right now and trying to figure things out.”

For Piccolo, another one of his skillsets is helping him pay the bills, which he said he is grateful for.

“For me, I’m lucky, and some other musicians are like this, we have other things that we know how to do to make money,” Piccolo said. “I do carpentry and remodeling, so right now, people, my friends and others have said, ‘Hey, there’s a project I need, would you be interested?’ So that’s saving my ass right now. And these are great jobs because I’m not working around people, I’m by myself. So it’s perfect for me right now, and helping feed my kids, which I’m so grateful for. I just feel fortunate, because some people, especially a lot of musicians, don’t really have other means to make any more money any other way.”

With everyone in the state’s music industry dealing with a lot of unknowns, Dale said being involved in the Red Dirt Relief Fund has been surreal because she didn’t know how critical the organization could be when it was started.

“We never really envisioned a scenario where everyone working in music is out of business, at least for a time period,” Dale said. “So it’s really humbling, honestly, to play a role to kind of help people feel like there’s hope. We will figure out how to get through this together, and the creative community is known for coming up with new ideas, new ways to communicate. Social media is alive with streaming, live music all the time. People are being generous through tip jar donations, virtual Venmo payments. So, we are going to get through this. It’s really powerful to just be a part of something very powerful that tries to alleviate some of the fears and concerns, even if it’s just for a little while.”

Dale said while the organization’s funds are currently exhausted, more grants will be given out as funds become available.

“Our goal is to continue this program until we feel like it’s reached a good stopping point. Because these grants are one time, so maybe there will be a time when we’ve reached everyone who had a loss,” she said. “Then we’ll have to figure out what to do from there, because some things may shift in terms of the traditional ways musicians have made money, which most recently has been performing live shows. The parameters may change, and we may try to have to figure out ways to do that and still create and economy and income for these people who are making music.”

Juanita Dillman, 102, died April 5, 2020. There will be a ceremony celebrating her life at a later date. Condolences may be sent and online obituary may be viewed at www.strodefh.com. Strode Funeral Home and Cremation.