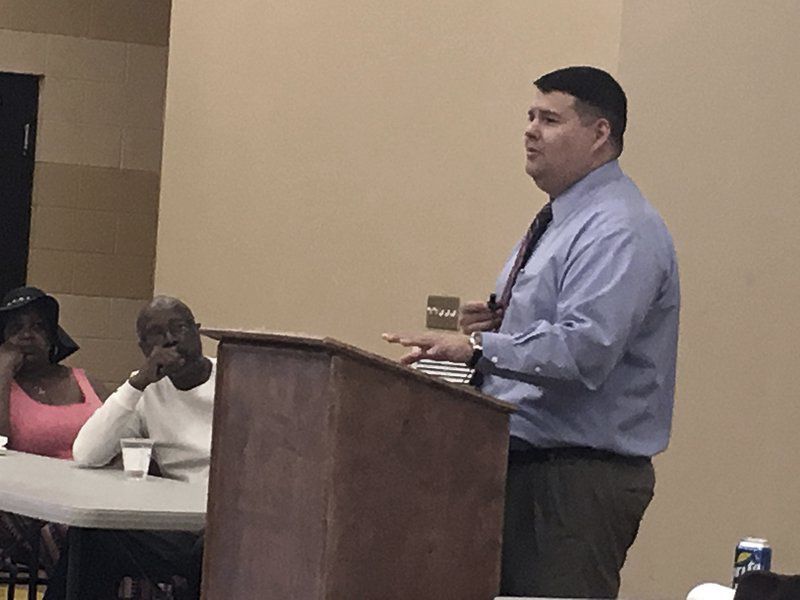 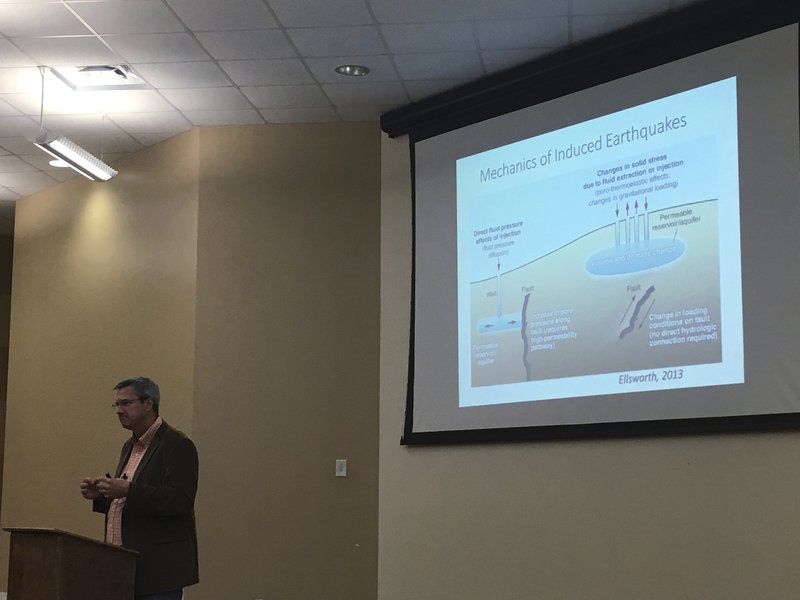 PAWNEE – The latest fight against earthquakes may be legal action, but Oklahomans have another weapon within the Pawnee Nation – tribal sovereignty. Earlier this year, the New York law firm Weitz & Luxenberg filed a lawsuit naming energy companies New Dominion, Sandridge Exploration and Production, Chesapeake Operating and Devon Energy Production Company as defendants. That was long before a 5.8-magnitude earthquake rocked Pawnee and the entire state on Sept. 3.

The tribe co-hosted an informational meeting Saturday at the Roam Chief Event Center, joining the Sierra Club, the City of Pawnee, attorneys and academics to educate an increasingly anxious public. Attorney Curt Marshall, from Weitz & Luxenberg, said he has no doubt about the cause of earthquakes in Oklahoma though there are still deniers within and without the oil and gas industry that provides so much of the state’s revenue and employment.

“We think the evidence is pretty clear and it keeps mounting,” he said. “The USGS just came out with a study on Monday about the quake in Fairview (5.1 on Feb. 16, 2016) showing the correlation. There have been other studies in 2014 and 2015 showing a correlation. They can make that argument. That’s fine. We strongly disagree.”

Andrew Knife Chief, executive director of the Pawnee Nation, said the time for inaction has long since passed. Reaction won’t work either.

“We can push back,” he said. “Here in the state of Oklahoma, local governments don’t have the authority to regulate any kind of oil and gas activity. The City of Pawnee can’t pass any kind of city resolution banning underground injection control wells within a certain distance of the city or whatnot. They can’t do anything. But you have an ally in the Pawnee Nation. That same restriction doesn’t apply to us. We have been pushing back. Oct. 22 of 2015 the Pawnee Nation business council passed a resolution calling for a moratorium on fracking activities.”

Pawnee Mayor Brad Sewell has seen his quiet rural town become a focus for national interests with deep pockets. He just wants to help the residents who have suffered from property damage or worse.

“There’s not a lot of tools we have in place to stop a statewide phenomenon like that.” he said. “Really the infrastructure that we have, whether it be insurance, whether it be emergency management, all of the stuff that we have in place for things like tornadoes, or fires or the other threats we have in this state, those are pretty well established. It’s something that’s new enough that it’s kind of uncharted territory for us in what to do next.”

Part of the problem, is knowing where to place the blame. While Weitz & Luxenberg struck out at some of the biggest operators in the state, a precision strike isn’t that easy. Todd Halihan, professor of Geology at Oklahoma State said through induced seismicity studies, patterns have shown that wells can be miles away from the epicenter of an earthquake, and several companies could have dozens of wells in the area.

“It gets pretty tricky in Oklahoma to figure out which one is doing what and how it’s all working because we have so many injection wells and they’re so close together,” he said. “Can you be precise enough about looking at the pattern and figuring out which well it was. The problem with that, on a social, political and legal basis, if you’ve got … let’s say three companies operating in a field out here. In some places those are much bigger numbers. You say, ‘OK, which one of you are operating the well that got seismically active?’ You’d probably quickly end up with three fingers pointing at each other.”

Knife Chief’s plan is about enforcement, education and speaking up.

“The thing that upsets me the most is that this is not going to stop. This is going to continue and the earthquakes are going to get stronger. At what point do we as a community say ‘enough is enough.’ Let the science catch up with the process. They keep telling us, ‘We’re waiting on the science. We’re waiting on the science.’ Well, no you’re not waiting on the science. You’re pushing forward. You’re increasing the speed at which you exploit the technology you have now. You’re not waiting on the science,” he said. “We need to let the science catch up … so they can tell us exactly what’s going wrong so we can put a stop to it. So we can change our ways. So we can find a new technology that won’t cause these earthquakes. Everything I’ve been told so far is that the trend is not good. That the earthquakes will continue and the intensity will ramp up. What can we do as a nation, educate our community. Stop thinking about earthquakes as a novelty, as something that happens and everybody stands around – because I was like that – everybody saying ‘Ooh, did you feel that?’ Everybody in the office is saying, ‘Ooh, did you feel that?’ We need to prepare ourselves. We need to prepare our homes and make us safe. We need to not fear them, as well. Fear only leads to inaction. Fear leads to panic.”

Knife Chief is already finding out how tough regulating a multi-billion dollar industry can be.

“The Pawnee Nation is doing all that we can, on all fronts, using all of our sovereign authorities, to push back. To make those entities that we’re fighting against hear our voice. Because we are asking a very reasonable thing. We are asking for patience. We are asking for everybody to take a deep breath,” he said. “As I have my environmental scientists running around our jurisdiction, I can tell that every single day they go to a new site that they didn’t know about they find a new violation. Every day. It’s becoming a joke, for me, anyway. To date, I don’t think I’ve had my environment scientists come back and say, ‘We’ve found one that was up to code.’ That’s an issue. I expect these folks that come in to exploit these resources to be professionals. Professionalism is not skirting the rules or getting away with stuff.”

PAWNEE – There is another aftershock from the earthquake that rocked Pawnee in September.