Herman Augusta White left his home to the church and a legacy of service along with it, but when he passed away he didn’t leave any immediate family behind to mourn.

Brown Dugger Funeral Home in Perry, who is handling White’s service, is inviting anyone who would like to attend White’s Sept. 4 funeral.

Funeral Home Director Rebecca Raines wrote a letter to media hoping to amplify White’s story, which would also be an effort to reach any people who may have known White and could add to the story.

“A neighbor across the street is the one who took him to the hospital and came in with his DD214 and said ‘All I know is everyone is dead and there’s not anyone,’” Rains said.

She said White’s wife and only son preceded him in death. He joined the U.S. Navy on May 7, 1945, which White’s neighbor proved by providing his discharge papers. Raines said she didn’t know who White’s parents were and has contacted the National Archives to get White’s full military records. She has also reached out to a reunion group for the ship White served on, as well as several luminaries, including President Donald Trump. 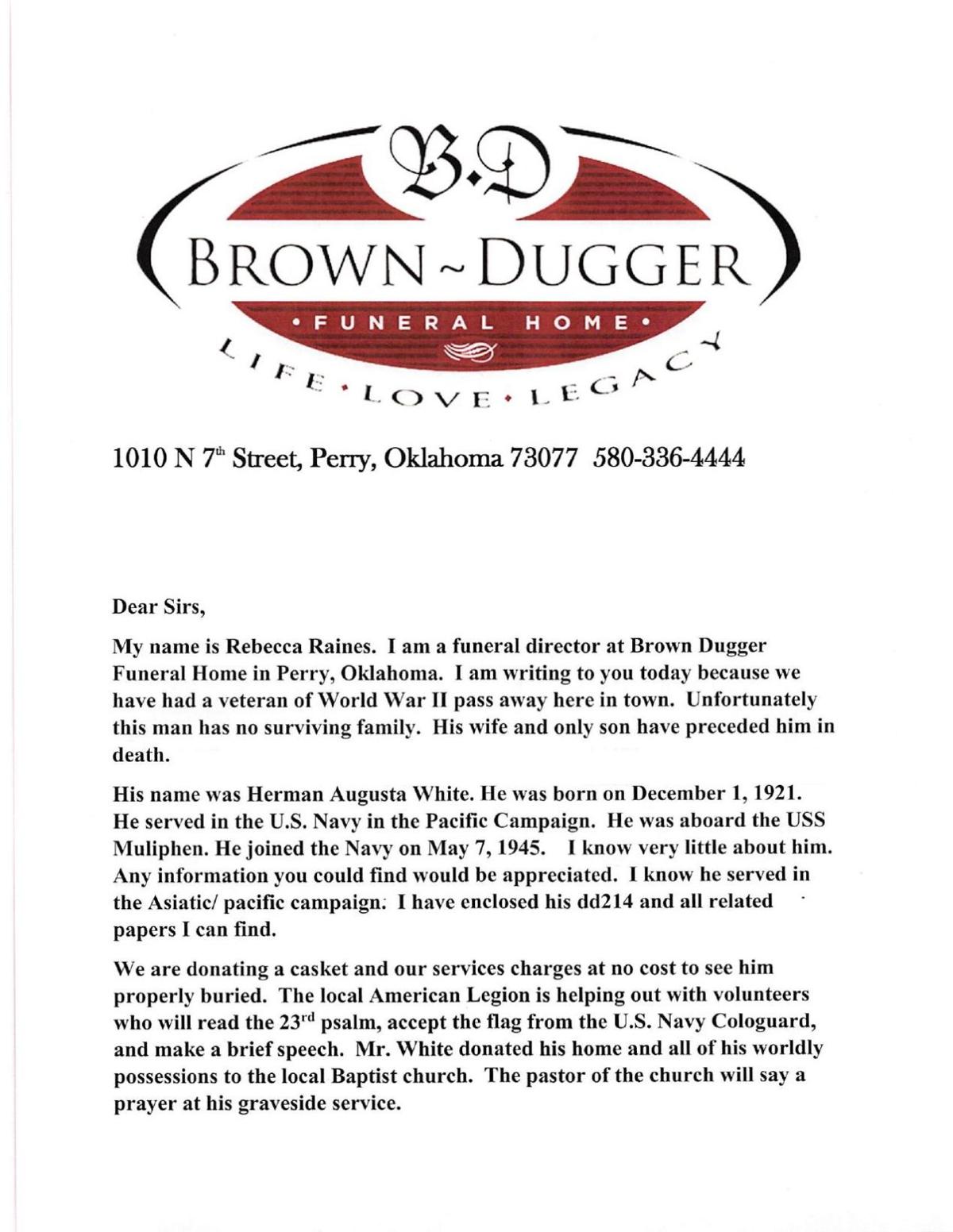 Huge crowds of people from across the country have rallied behind veterans when they are buried without surviving family. Raines is expecting a big turnout.

“The Wounded Warriors Project is coming. They’re bringing rifles and a live bugler and they are a big, big group. Several motorcycle groups are coming. If we can keep it under 20,000 I think we’ll be OK. I’m going to leave that up to the Mayor with what he wants to do,” Raines said, only half-way joking. “I’m going to ask the American Legion if we can use their building for overflow. This will be a graveside service, open-air graveside service. We are not planning on having a church service, there’s not a church big enough in Perry.”

White, according to the discharge papers, was a Seaman Second Class serving on the USS Muliphen. He was awarded an Asiatic-Pacific Campaign Medal.

Service time begins 10 a.m. Sept. 4 at Grace Hill Cemetery in Perry. Raines said a moment of silence, balloon release, "Taps" and flag-folding will be including in the ceremony.