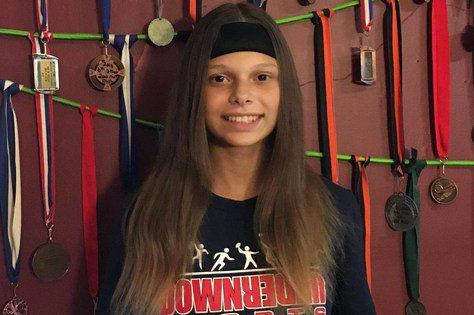 Courtesy of Charithah Pricer Perry High sophomore Lilith Pricer will be one of the runners representing the United States in the 32nd annual Down Under Games this summer in Queensland, Australia. Pricer will compete in the cross country event. 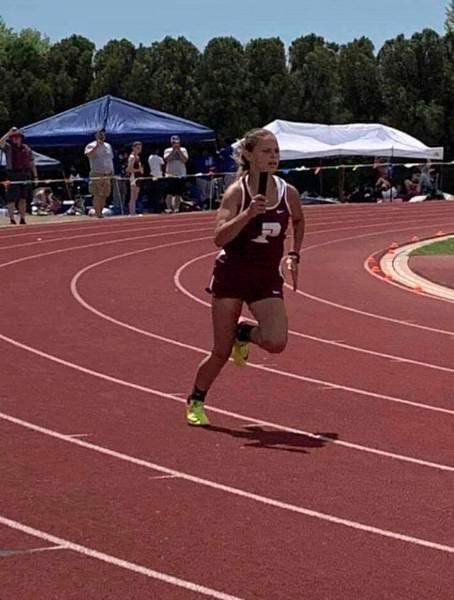 Courtesy of Charithah Pricer Perry High sophomore Lilith Pricer runs track for the Maroons. Pricer has always loved running, intially starting as only a sprinter, but also picking up cross country in her freshman year.

Courtesy of Charithah Pricer Perry High sophomore Lilith Pricer will be one of the runners representing the United States in the 32nd annual Down Under Games this summer in Queensland, Australia. Pricer will compete in the cross country event.

Courtesy of Charithah Pricer Perry High sophomore Lilith Pricer runs track for the Maroons. Pricer has always loved running, intially starting as only a sprinter, but also picking up cross country in her freshman year.

PERRY – Lilith Pricer has always loved running and hoped it would someday take her places. She never knew it would take her to Australia.

The Perry High sophomore will get that chance, though, this summer after she was invited to run in the Cross Country Gold Coast Classic as part of the 32nd-annual Down Under Games.

The Down Under Games started in the 1980s as a way for New Zealander George O’Scanlon to bring in American football players in a tournament called “The Down Under Bowl.” Over the years, they have added everything from basketball to cross country.

Pricer, who qualified for state in cross country her freshman year at Perry, said they look for athletes from around the world who have done certain events in certain times. In her situation, she had ran a 5K in under 22 minutes and 45 seconds.

When she got the invite, Pricer’s mother, Charithah, nearly threw it away because she thought it was just junk mail. But Lilith stopped her because she had heard of the event once before, as her cousin, Alex Bond, had went down there before.

Charithah said it was fate that Pricer was invited because Lilith’s middle name is Australis. Now, she is headed to the Southern Hemisphere and Australia.

For Pricer, it is not only a cool trip to a foreign country, but also a way to get more experience in a sport she has always loved.

“That is what I like doing,” Pricer said. “It is what I love to do and I want to get a scholarship for it and go to college. I like running.”

Even when she was in elementary school, Pricer would always be thinking about when she could run and looked forward to getting in junior high so she could run for the Maroons competitively.

At Perry, track and field and cross country start in the seventh grade, which Pricer came into as a sprinter. In her junior high years, she ran the 400- and 800-meter relays, as well as the 100-meter and 200-meter dashes, individually.

It wasn’t until her freshman year in high school when she got involved with cross country. Her coach back then had told her he signed her up to help with the 200-meter dash in track. The change of pace was definitely something Pricer had to get used to.

“I think, in your head, you have to tell yourself to stay at your own pace and finish the race. Don’t die on the first 800 meters.”

To prepare for cross country, Pricer would run around Perry so she could get used to different terrain while Charithah would follow her in her car. There are some days when Pricer is already out there before Charithah gets in the car.

“I used to let the dog out and next thing I know, here she comes running behind the dog,” Charithah said.

Once Pricer got into high school, it wasn’t smooth sailing, though. She competed in a lot of events in track and had worked her way up to a six-mile run in cross country, even working on her diet to stay in the best possible shape.

However, there were some things being at Perry on a team of just three that she had to learn the hard way.

At this year’s cross country regional, Pricer collapsed of dehydration and was disqualified, falling short of back-to-back state qualifications. She came to find out that her diet, which excluded a lot of salt, was the cause and that she actually needed salt for running.

“We are always watching these movies and they are talking about ‘the wall,’” Charithah said. “We always joke about it and I thought she was hitting it, so I told her that she tried too hard and broke through the wall and collapsed. The thing of it is, her doing that, she knows her body now and knows the sign of dehydration and stuff like that.”

As a runner who has self-taught herself a lot, keeping notebooks of different tips and other ideas, there are a few things that fall through the cracks. It stems from competing on a team where it is just her and two boys.

It is part of the reason where she is now working on getting a fifth-and sixth-grade program started in Perry, so kids can get a head-start on their careers and not play catch-up.

“I want to get them into running. I can explain to them,” Pricer said. “I didn’t know if I could do long distance, then I ran a mile and didn’t think I could do two miles then. I did six miles this year, you have to work up to it. You have to have the mindset to do it.

“It is not until seventh grade when you learn form. You need to learn your form and stride and what event you want to do before then so you can start practicing.”

Pricer, 16, is hoping that by doing this race in Australia, she can help inspire younger runners in Perry to join the program and that way, she won’t be an anomaly.

First, she has to get to the event, which she leaves for June 27. She already has her passport, but she and her mom have set a goal of $5,000 to reach to pay for everything.

So far, Pricer has made peanut butter balls, done yard work and babysat to reach $1,565. For Valentine's Day, Charithah will be delivering singing telegrams around town for $20 and over the spring, they are thinking of even more fundraisers.

When she does get there, Pricer will compete in a 5K All-American meet on July 1 between runners from around the United States and then on July 4, she will run in the 5.7K Gold Coast Classic against all the international competition as part of Team USA.

Off the course, she is excited to see the beach and all the animals. Holding a koala is on the itenarary, but mostly she looks forward to learning from other runners and coaches in a once-in-a-lifetime experience.

For a girl who grew up writing track children's books and watching the great Usain Bolt – with marathon world record holder Eliud Kipchoge now her favorite – Pricer thinks it is a dream come true for this opportunity to represent Perry on a global stage.

For ways to donate to Pricer's travel fund, one can head to https://DownUnderSports.com/YBN-LYG.