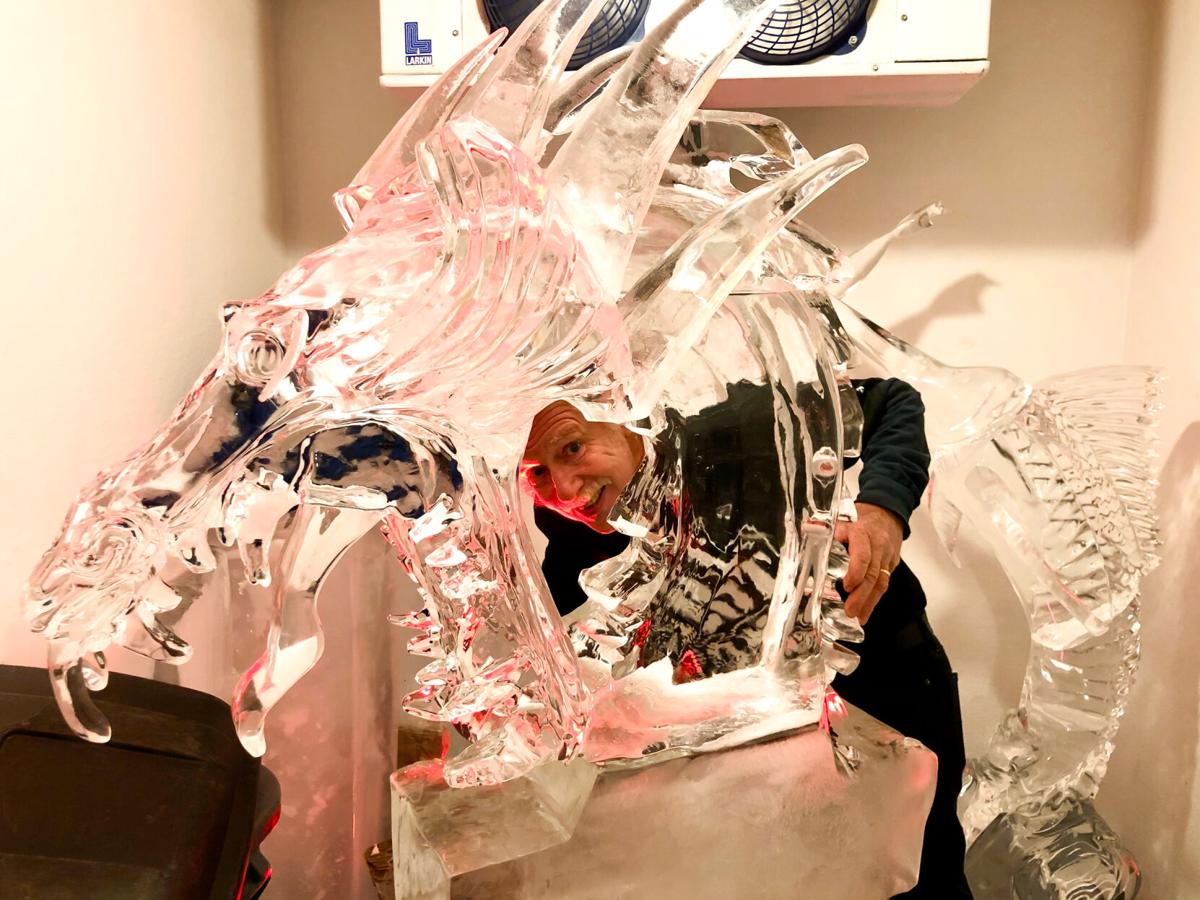 Drue Brandenburg Poses behind a sculpture of Merlin 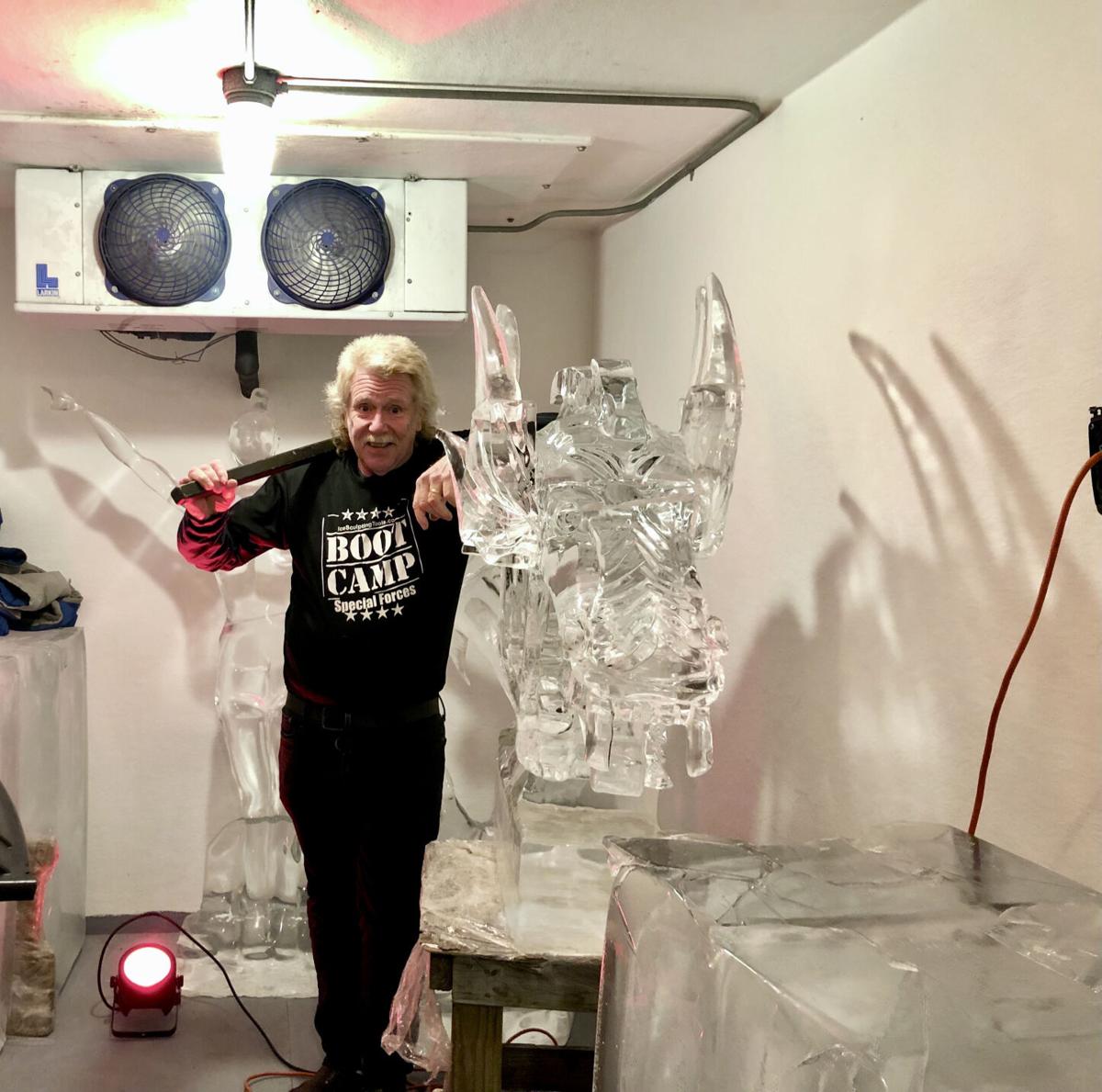 Drue Brandenburg has been sculpting ice for almost 40 years and said this is one of his passions. 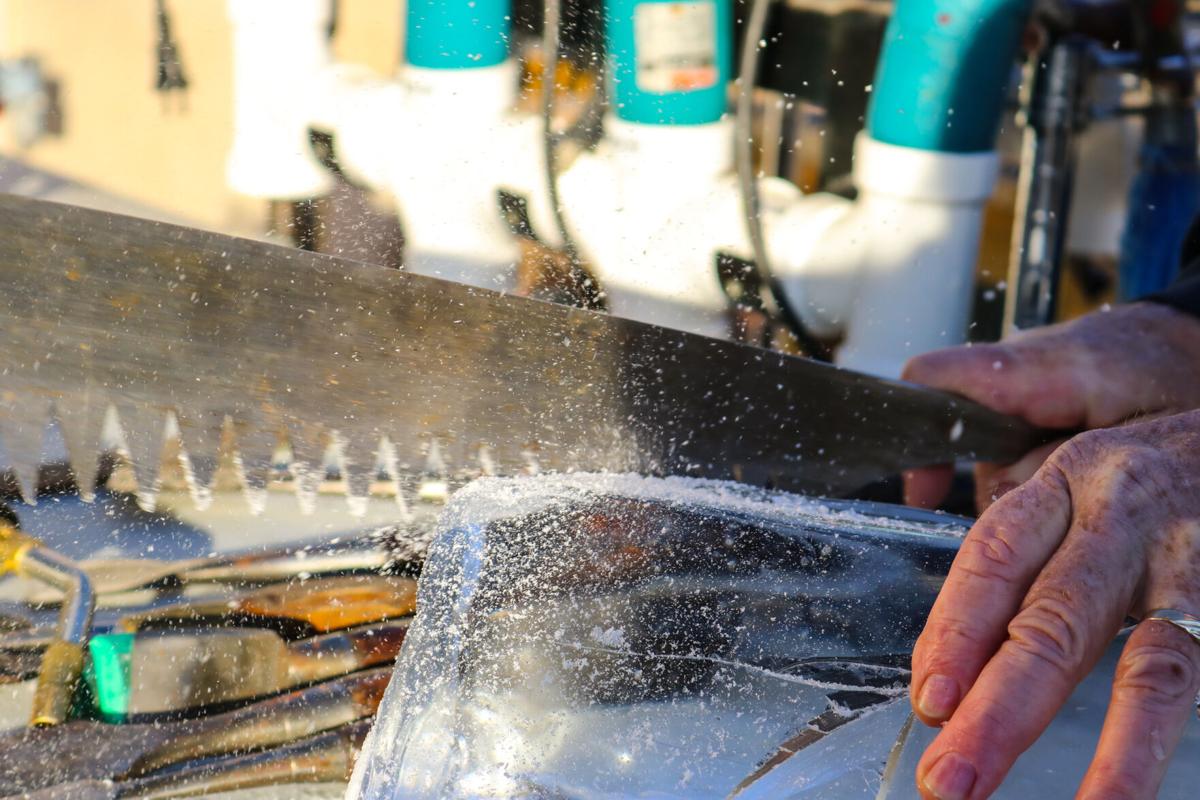 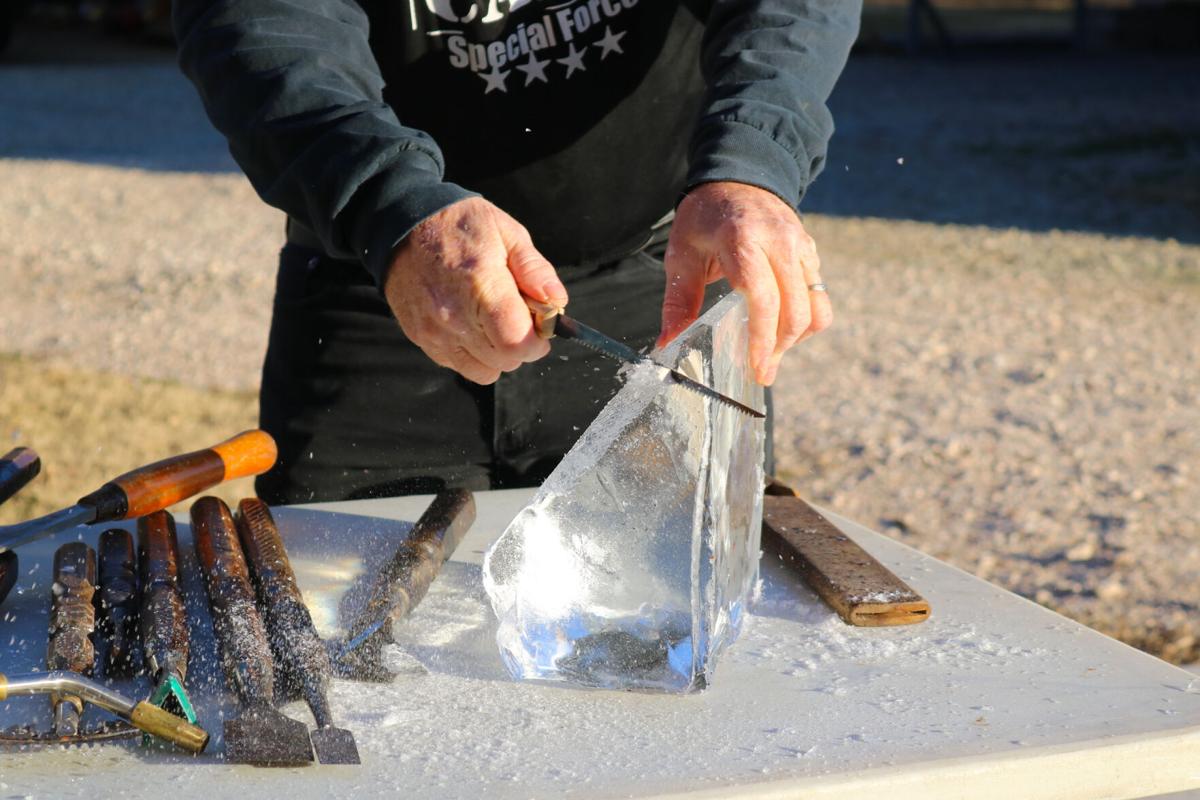 Drue Brandenburg shaves off a piece of ice that he uses to make ice sculptures. 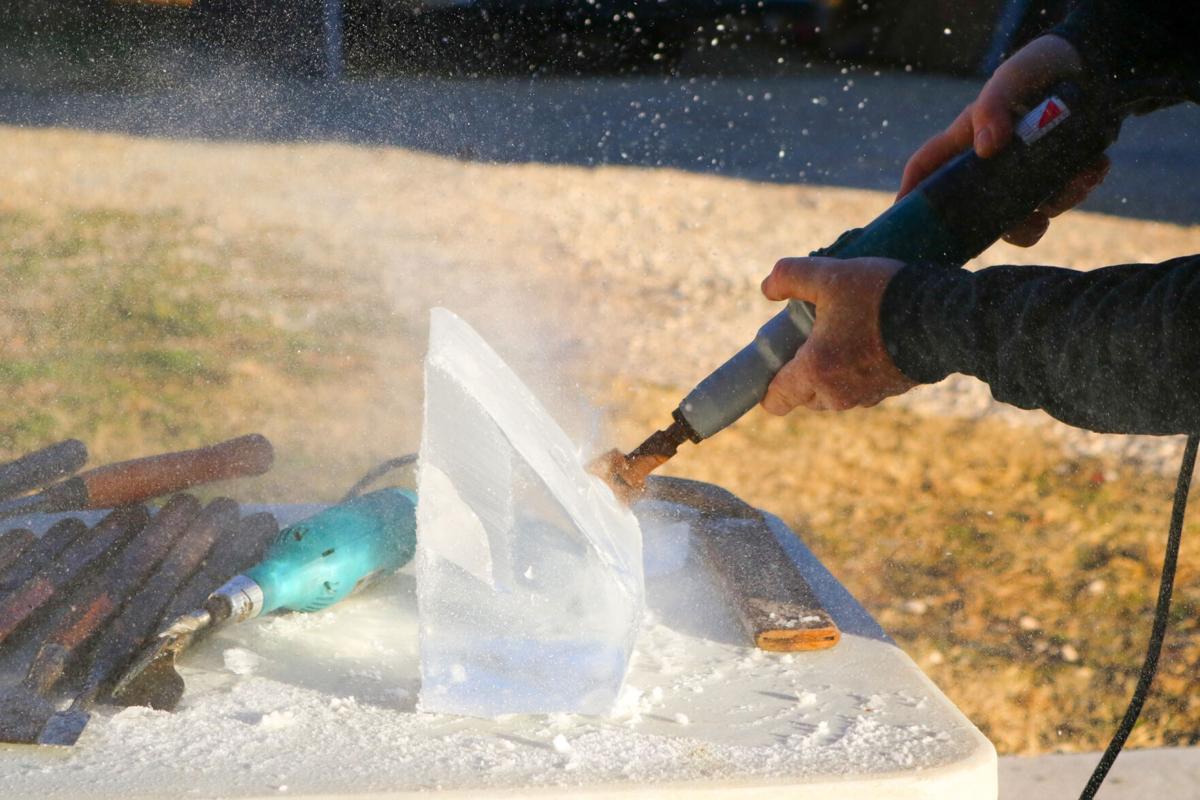 Drue Brandenburg said times have changed for ice sculpting and he rarely uses a chisel and now has better tools. 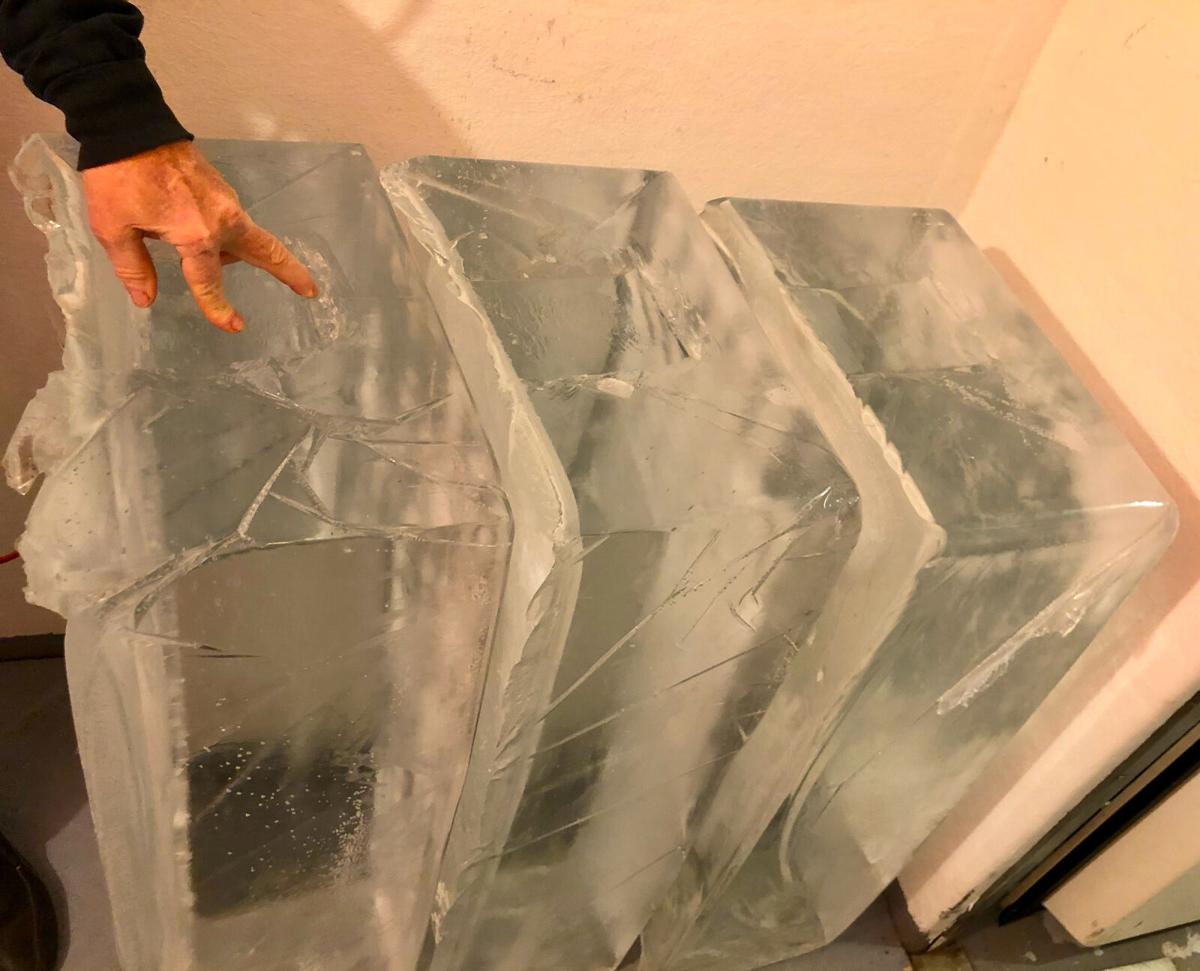 Pictured are three blocks of ice that weight 300-pounds. This ice takes four to five days to make. 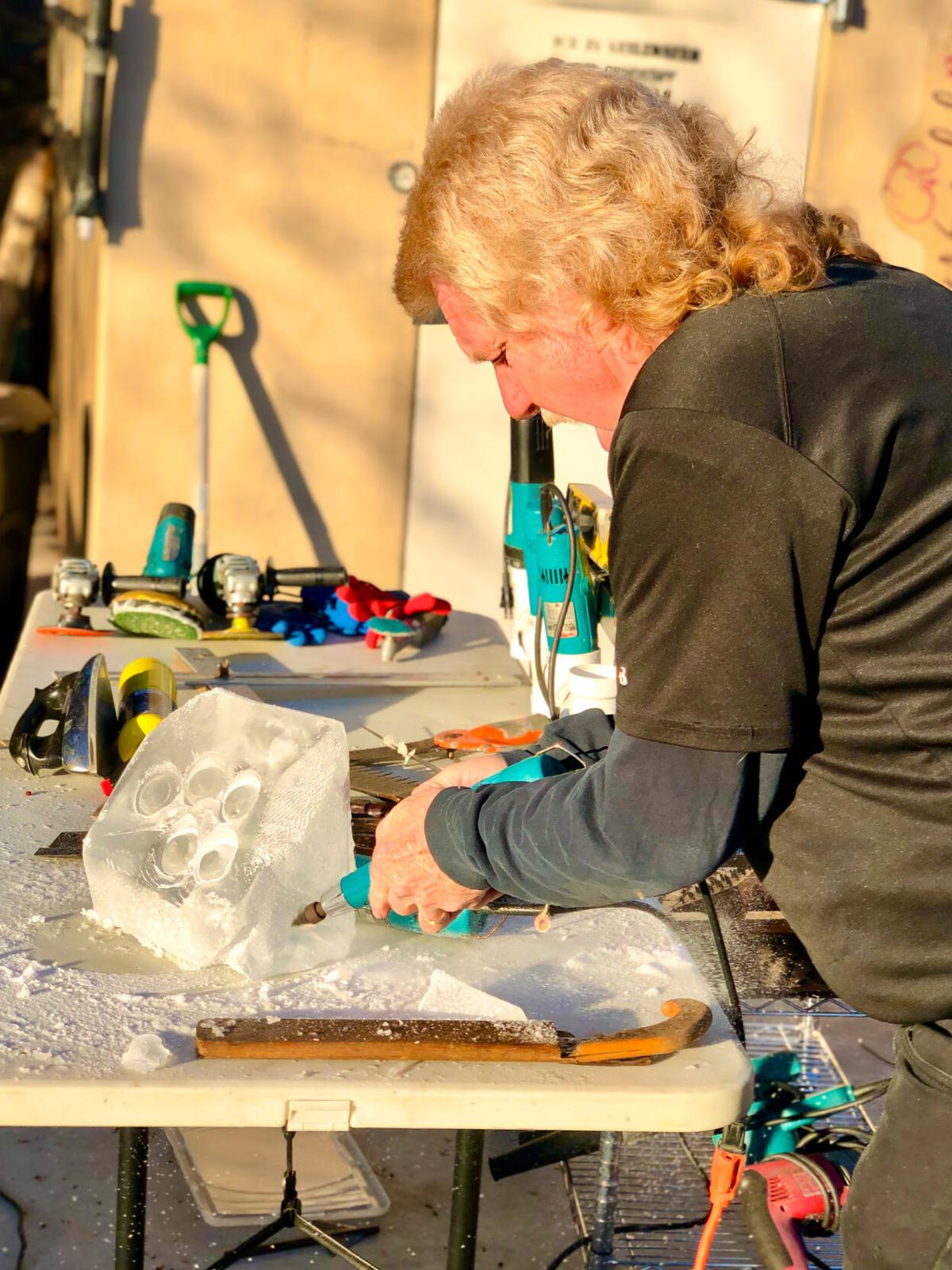 Drue Brandenburg has learned how to quickly and efficiently sculpt ice over the last 40 years. 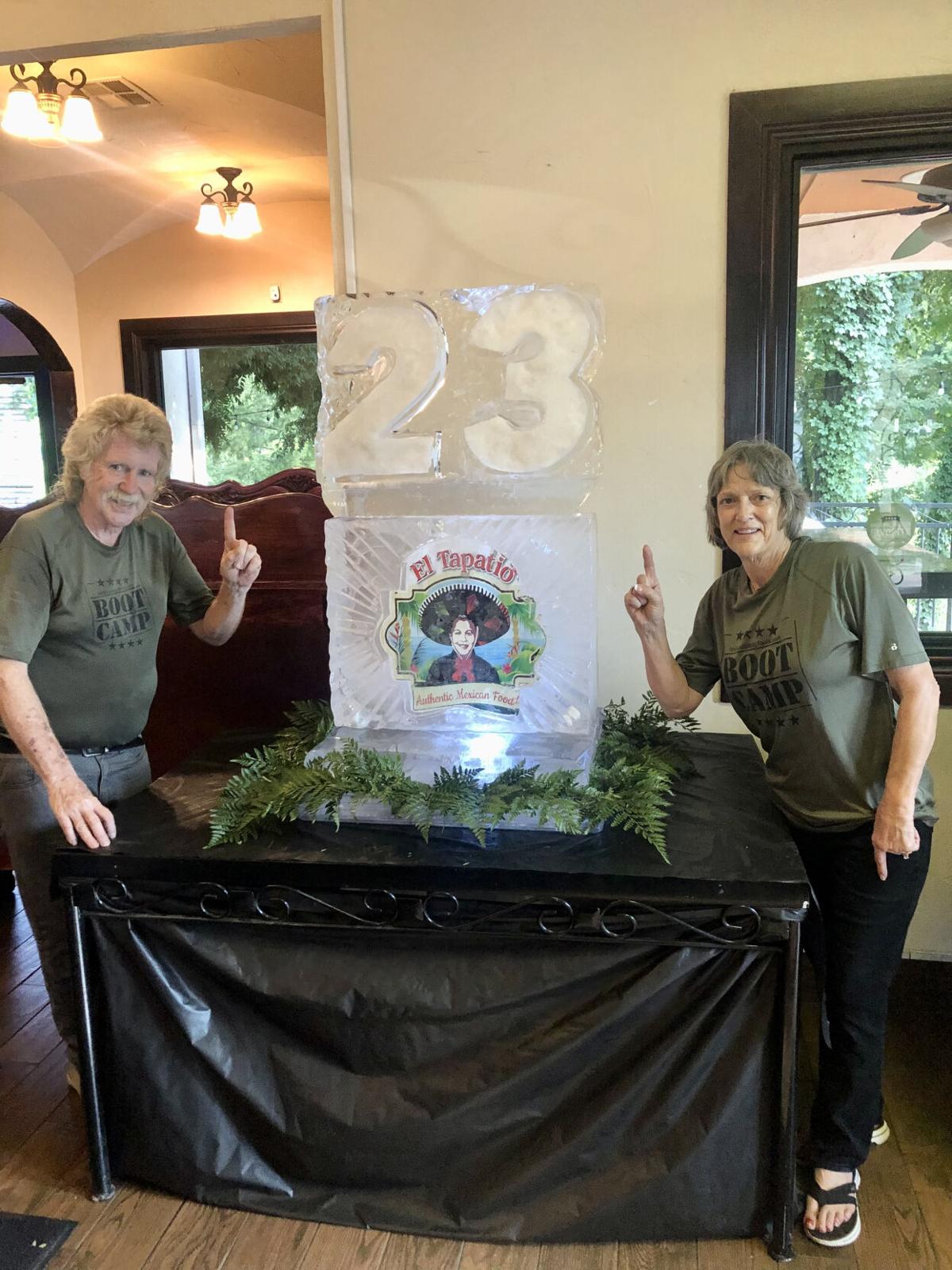 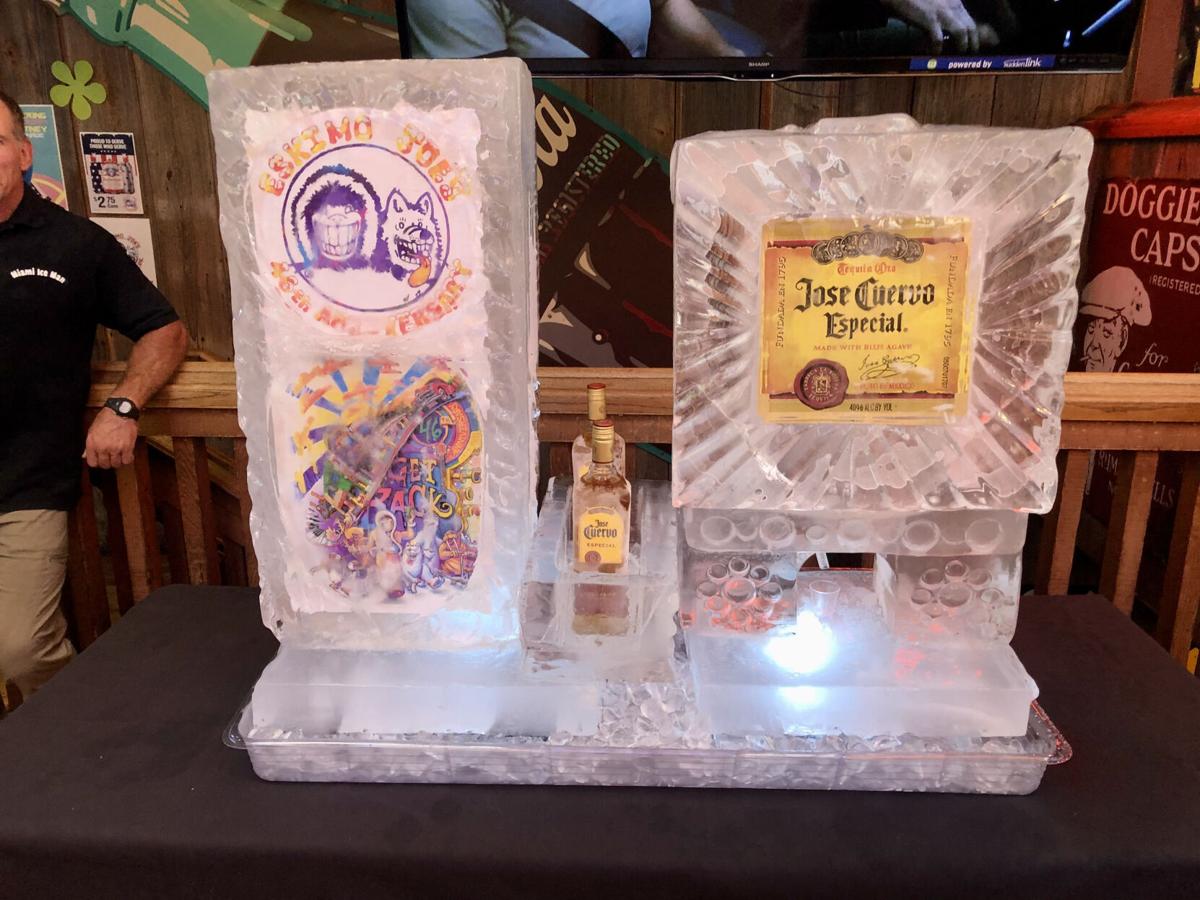 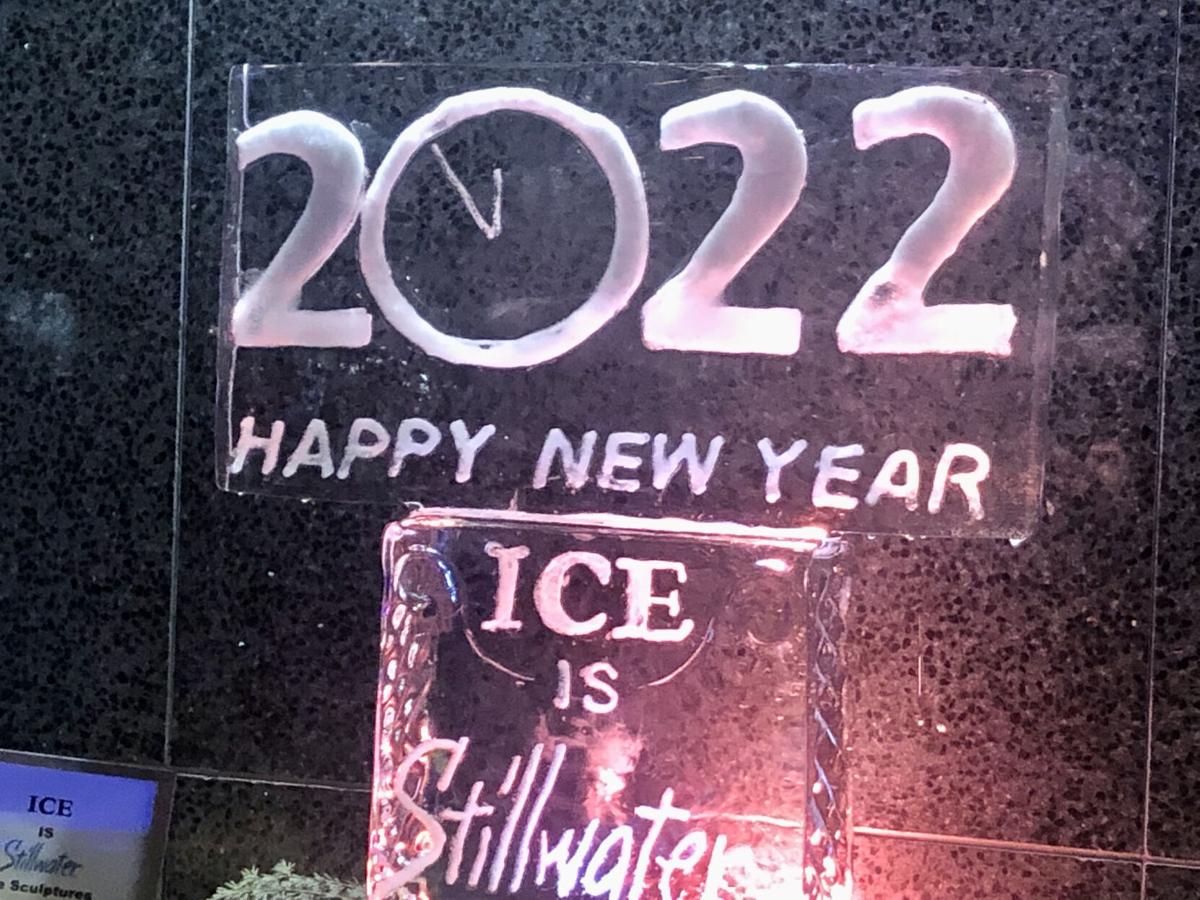 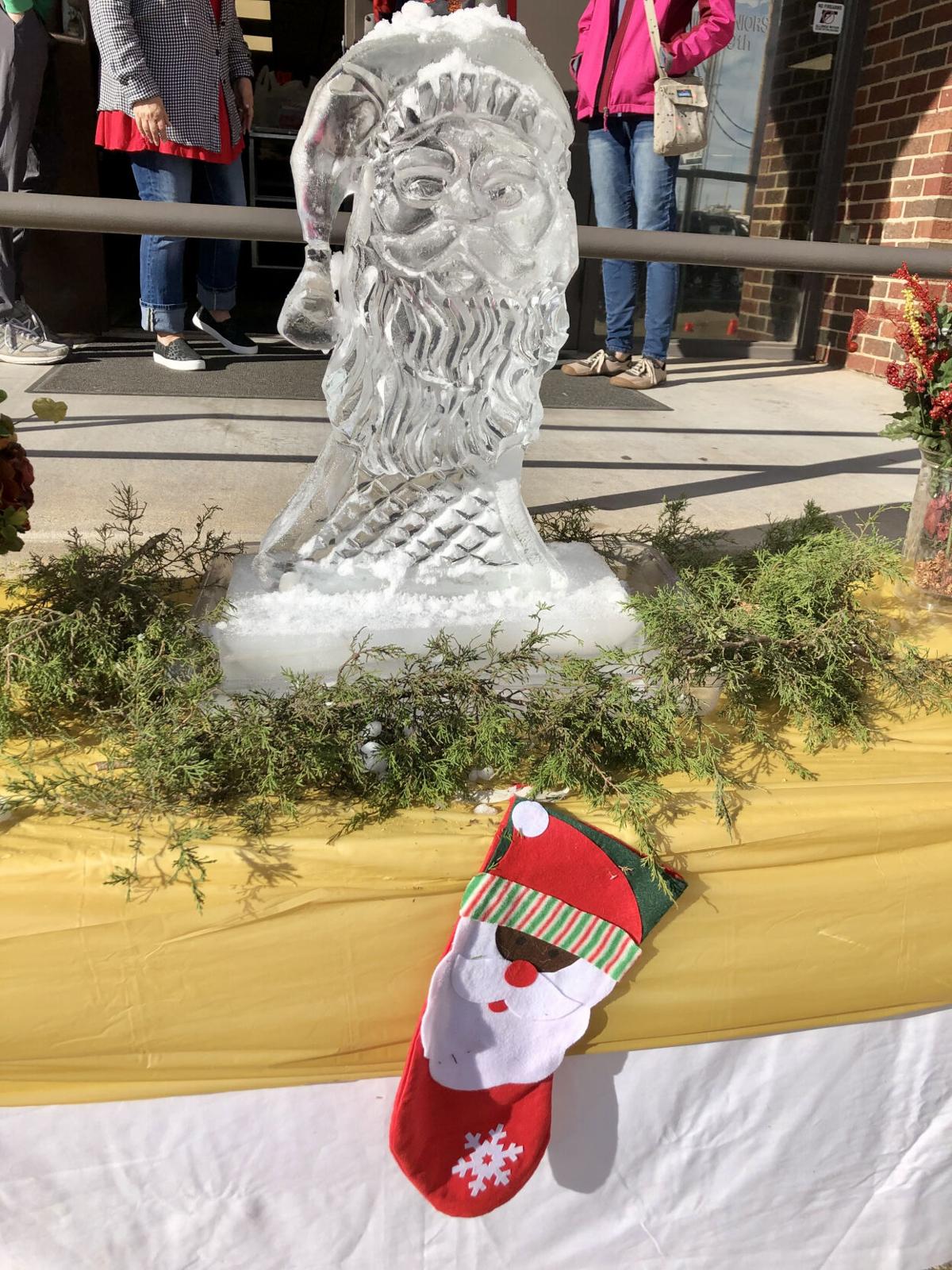 Drue Brandenburg Poses behind a sculpture of Merlin

Drue Brandenburg has been sculpting ice for almost 40 years and said this is one of his passions.

Drue Brandenburg shaves off a piece of ice that he uses to make ice sculptures.

Drue Brandenburg said times have changed for ice sculpting and he rarely uses a chisel and now has better tools.

Pictured are three blocks of ice that weight 300-pounds. This ice takes four to five days to make.

Drue Brandenburg has learned how to quickly and efficiently sculpt ice over the last 40 years.

Stillwater resident and Oklahoma State University Alumni Drue Brandenburg has lived an exciting life as a chef, Associate Professor of culinary arts, and ice sculptor. He picked up and fell in love with ice carving as a chef and has been doing it for almost 40 years.

“I went to cooking school, and then after that, I worked in Los Angeles at the Century Plaza hotel, and there was a guy out there carving ice. I said, ‘oh, I want to do that’” he said.

The first sculpture he made was a swan which took him a long time to create and posed some challenges.

“I chipped a little swan on a block of ice, stayed up all night, broke it during the carving session,” he said. “Got another block of ice out and repeated it [and] got it right the second time. I put it at the buffet and the owner of the resort’s wife … she said ‘Oh my God chef did you make that,' she goes ‘That’s the most beautiful eagle I’ve ever seen.’”

Brandenburg injured himself and eventually left the hotel business where he was working more than 90 hours a week and running 12 different hotels. He began teaching culinary art and ice sculpting at Johnson and Wales University in 1992 and taught for 20 years.

Brandenburg won a gold medal in 1992 for ice carving in Boston Culinary Salon, and in 1997 he started his first business, the Miami Iceman.

“I went to get incorporated, and I wanted to be the iceman. I liked that, although that name was already taken,” he said. “So I petitioned the state to allow me to call the business the Miami Iceman, and they gave me the name, and I got it registered and started the business.”

Brandenburg said the ice business took off, and he quickly became a hit in Miami, Florida.

Brandenburg didn’t rise to success alone. He credits his wife of 33 years, Kathryn, for the victory.

“I would have never been as successful if not for her. At the Miami Iceman, she ran the show,” he said. “[She] took all the orders from customers, did all the invoices, and managed receivable.”

Brandenburg said Kathryn helped in various ways, which allowed him to focus on carving the ice for customers.

He and his wife lived in Florida for several years before returning to Stillwater in 2019.

“I carved ice for three years down there [in Miami], and that’s all I did. We were crazy busy. And then the pandemic hit, and there was no ice business, and so I didn’t know what I was going to do,” he said.

Brandenburg was in town for a high school reunion and decided to stay here. Since moving back, he’s done a few ice sculptures for people, but he’d like to do more.

“I’ve done a couple of pieces for Eskimo Joe’s when they had their 46th anniversary. I went down there and introduced myself,” he said.

He also did an ice carving for El Tapatio for their 23rd anniversary, sculpted Santa Claus for the Stillwater Community Center, and did a 2022 sculpture for the New Year’s Eve event.

“The whole thing is, I want to do this, but what happens when you start a business, you create a beast, and the beast has to be fed,” he said. “So it was kind of like a hobby I brought with me. I brought the freezer, all my ice-making equipment when I moved here.”

Brandenburg said he loves ice-carving, and it’s one of his passions.

“Most of the sculptures you sell are called a single block. One 300-pound block of ice that you cut into smaller pieces and stuck back together,” he said. “The sculptures I have out there now are all made of two 300-pound blocks of ice. They’re not really practical to sell to a restaurant with a catering event.”

Brandenburg said it doesn’t take long to carve sculptures because he spent the last 40 years perfecting his craft. Before, it would take hours to carve something that may take less than an hour now.

“Back then, the skill set was completely different. Everything was done with chisels and a chainsaw,” he said. “I rarely use a chisel on a block of ice now.”

Brandenburg said giving the customer the finished product and watching their faces be in awe is one of his favorite things about being an ice sculptor.

He said if someone is interested in an ice sculpture to visit his website and he will attempt to create whatever is wanted.

“I love Stillwater. We love living here,” he said. “I’m just glad to be back and be able to bring this with me and hopefully get some interest in it.”

Brandenburg has a block ice-making machine that allows him to make 300-pound blocks of ice.

“What you do is you fill these tanks up with water – the quality … the ice is like glass it’s crystal clear – if you see an ice cube that comes from the ice tray it has a white center, that’s air trapped by the ice,” he said “We make a block of ice that’s 40 inches long by 20 inches wide and 10-12 inches thick that’s completely clear,” he said.

It takes four to five days for the blocks of ice to be made, he said.