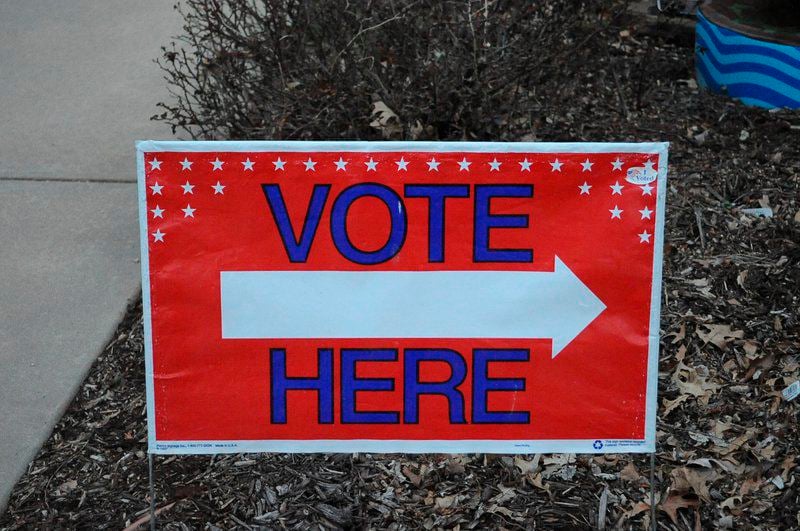 A Vote Here sign at the First Presbyterian Church in Stillwater. 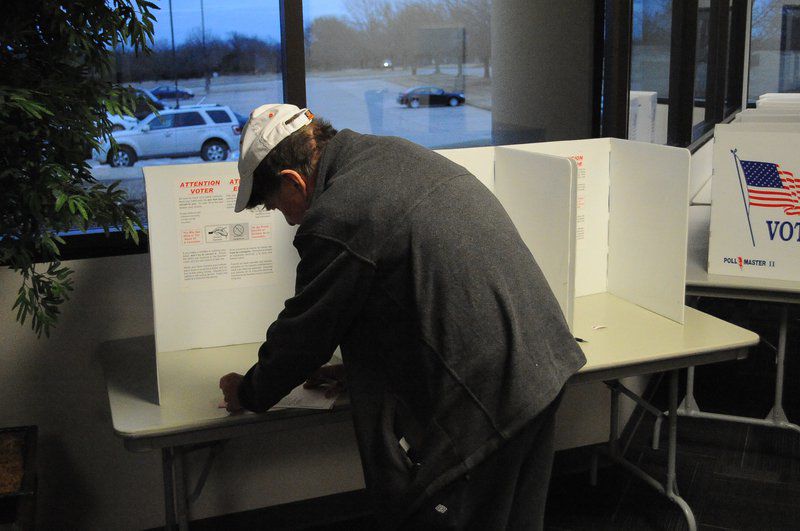 Jordan Bishop/Stillwater News Press Former United States Congressman Wes Watkins votes in the local election at Meridian Technology Center on Tuesday. Watkins joked that he was used to being on the ballot after he served as a politician for more than 40 years. 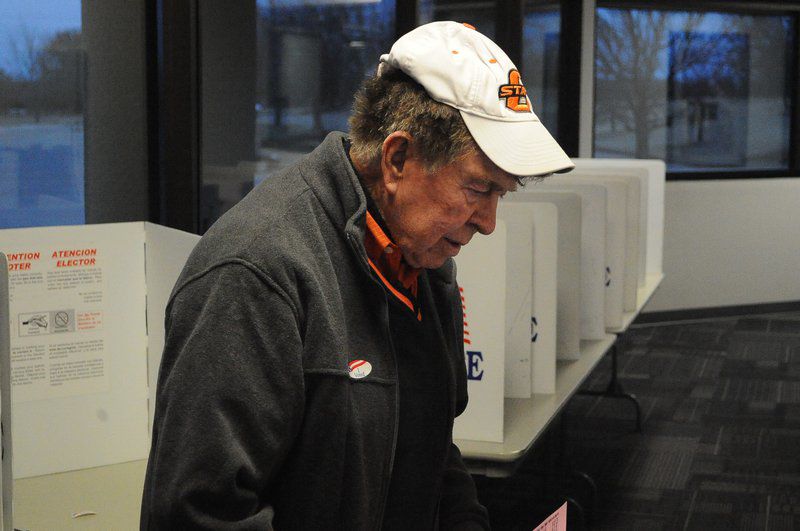 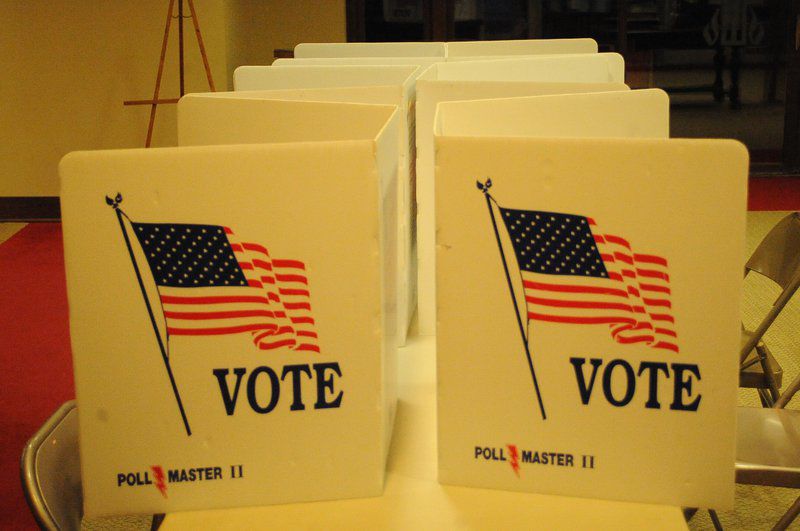 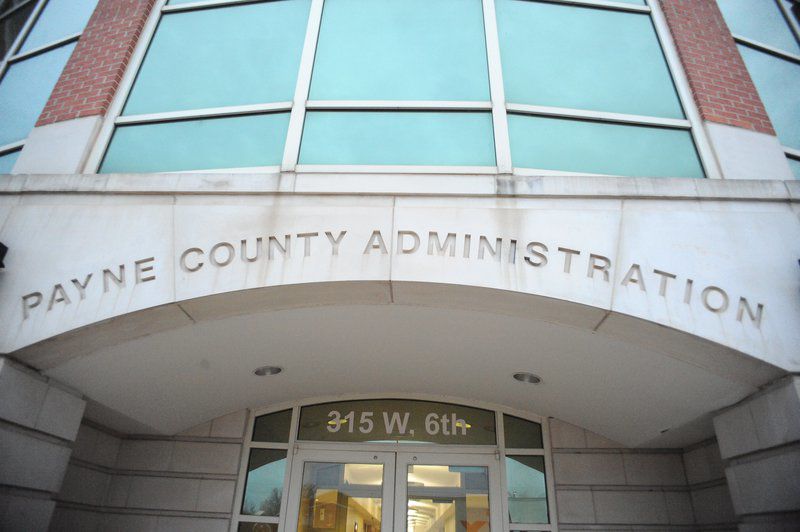 A Vote Here sign at the First Presbyterian Church in Stillwater.

Jordan Bishop/Stillwater News Press Former United States Congressman Wes Watkins votes in the local election at Meridian Technology Center on Tuesday. Watkins joked that he was used to being on the ballot after he served as a politician for more than 40 years.

John Wedlake looked at the early reporting numbers Tuesday night and felt a sense of accomplishment, but was also a little wary.

The initial election results with about 14 percent tallied up showed Wedlake with a big lead for Stillwater’s third City Council seat. Wedlake, the incumbent, knew there was still plenty of time for challenger Slade Mielitz to make a move, so he tempered his expectations.

The next time he saw the results, he was ecstatic as those initial large numbers proved to be setting a tone in a landslide victory for Wedlake. The unofficial results, with all 21 precincts reporting, have Wedlake winning with 81.99 percent of the vote.

“After the 100 percent came through, I was able to check it again and needless to say I was excited,” Wedlake said. “I think if I were to wrap it up into one word, it would be humbled more than anything. This is not something that I take lightly.”

Wedlake said the vote showed a lot of faith in the current city council as he will now get ready to enter his second term. Unlike his first term, Wedlake now gets four years as he was the final council member on a three-year term.

“I appreciate what the voters have said today,” Wedlake said. “I am excited to see what we can forge the next four years. I look forward to that with great anticipation.”

After hearing from voters on the campaign trail, Wedlake said he still hears the questions about infrastructure and transportation in the city, but he assures the council is working on those issues and he will continue now that he has been re-elected.

“Transportation and infrastructure is a big thing here in Stillwater and probably the thing I get emailed about the most. With this recent spending package that we just approved a few months ago. I think the citizens are going to be happy with how our infrastructure will grow.”

He also looks to continue work on the issues with Block 34 and multimodal transport in Stillwater.

Wedlake said that most importantly to him, the 1,361 voters who supported him shows that what he is doing is working.

“The greatest skill I exercise as a councilor is my ability to listen,” Wedlake said. “Listening to people is by far the most important thing I do on that horseshoe and I plan to continue that to that end for the next four years.”

Mielitz, who was running for public office for the first time, said it was an experience that helped him learn a lot about the city as he moved to town 18 months ago.

“The experience has been good. I enjoyed the debates I was in and getting to know Councilman Wedlake,” Mielitz said. “Getting to talk to him and getting an idea of how he felt about the community. Him being a lifelong resident of Stillwater, our points of view were different. I like getting to know him and the Stillwater League of Women Voters, that was an amazing opportunity, as well.”

Mielitz, whose wife is on the faculty at Oklahoma State University, said he is working toward possibly getting a graduate degree so he doesn’t know when he will run for public office again, but wants to get more involved with the community.

Two groups he is looking forward to working with is Envision Stillwater and Love Our Stillwater.

“Potentially going to run again in the future, not 100 percent sure since I am going to school right now and planning on getting a graduate degree so timewise, we will see down the road,” Mielitz said. “I am going to try to get more involved in the community and see what I can do to support the Envision Stillwater group and the Love Our Stillwater group. I am interested in getting involved with that and getting more in touch with the community.”

Something in the future he would like to look into is possibly city planning, as Mielitz spoke about adding retail on the campaign trail and that is an area that still interests him.

A big issue on the ballot for Payne County voters was the extension of the one-fourth cent sales tax for another 10 years.

The proposal also would change the intent of the tax – approved in 2005 for the purpose of the construction and maintenance of the county jail – to be allocated for county road projects.

The vote was an overwhelming success for the Payne County Commissioners as it nearly earned 90 percent. The votes for the proposition was 2,686 to 363.

“It’s awesome. I am so happy for the county and the people,” District 3 Commissioner Rocky Blasier said. “I thank the people for supporting this. I think it will really make a difference. It will be a year away before we even start receiving it but it is a great day. They will really be liking it here in a year or so when we get the money and start working with it. I am just tickled to death.”

Blasier, who is responsible for the western side of the county, said he can’t wait until April 1, 2021, when the money will start to go into their funds as road maintenance in the county has been much needed.

“This tax will be strictly for asphalt roads,” Blasier said. “Just the materials we need to asphalt the road but it will free up some of the other monies so we can get more gravel for county roads. It will be a good deal.”

His counterpart, District 1 Commissioner Zach Cavett, was also thankful to the voters for getting the proposition passed. Cavett is in charge of the east half of the county and he said the money will help a lot with maintenance on all roads instead of just a few spots.

“We will be able to do a little more than double what we are currently because this new tax will bring in about $25,000 more per month than the previous collections what we take in for roads and bridges,” Cavett said. “We are also able to leverage the funds that we have to improve all of our roadway systems and we should be able to get ahead of the maintenance schedule and be able to start the maintenance that is needed on our roads and that drives the cost down when you can maintain them properly.”

Cavett said the vote was a big sign of how much faith the people have in the commissioners to get the work done.

“The people realize they need their roads fixed,” Cavett said. “...The bigger picture is that they trust the leadership that was in place to do with the money what was stated and improve the county and the county’s roadway system.”

Elsewhere on the ballot in Cushing, two-term City Commissioner Don Amon was upset by Ricky Lofton, who unofficially won with 51 percent of the vote. Amon, who had served in seat 5 on the City Commission and was chairman of the group lost by about 50 votes to Lofton, a Cushing native who has worked for decades with the Cushing Lumber Company.

Overall, the ballot numbers were down from the previous elections, with only 319 votes coming in the Cushing election; 1,660 in the Stillwater election compared to 3,080 in the mayoral election of 2018; and 3,049 on the Payne County proposal.