Oklahoma Sec. of Education Ryan Walters has sent letters to the Stillwater Board of Education and the Oklahoma Attorney General’s Office urging policy that would prohibit biological males from using girls’ bathrooms in public schools.

Last week, Stillwater Superintendent Gay Washington sent a letter to parents in an effort to address “concerns, rumors and misinformation that are circulating regarding the school district’s restroom policy.” In the letter, Washington wrote that there had been no bathroom incidents reported by students or teachers and that Title IX prevented the school from discriminating based on gender identity. Washington’s response came after SPS parents and pastors from local churches spoke during a public comment portion of the March 8 school board meeting asking for a policy that would prohibit a transgender girl from using the girls’ restroom. They claimed there were girls at one of the schools who were purposely not drinking water to try to avoid using the restroom.

On Friday, Walters, who is also running for Oklahoma Superintendent of Public Instruction, claimed it was the SPS school board that was misinterpreting Title IX.

“Stillwater School Board Members: Your incorrect interpretation of Title IX and use of court cases with no jurisdiction over Oklahoma gives you no right to allow men to use the girls’ restrooms in our schools. The US Department of Education’s rules, that your school board claims ordered this travesty, simply allowed school districts to choose their own path – and Stillwater has chosen poorly,” Walters wrote. “You have chosen radicals over your students, ideology over biology, and ‘wokeness’ over safety.”

“Woke” is a term introduced by Black Americans that means to stay alert to injustice and has since been adopted by conservative figures to mean overly politically correct. 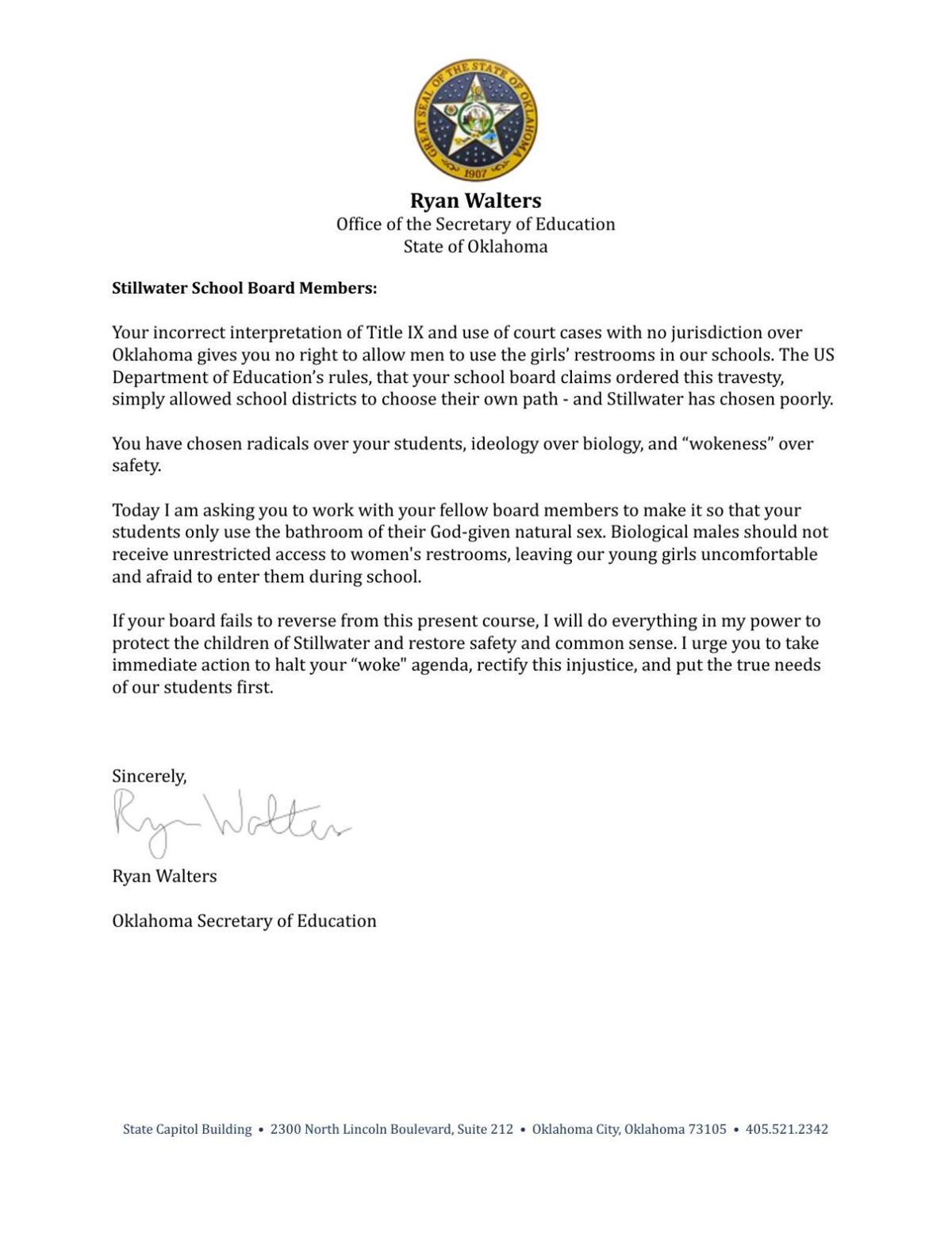 “Today I am asking you to work with your fellow board members to make it so that your students only use the bathroom of their God-given natural sex,” Walters writes. “Biological males should not receive unrestricted access to women’s restrooms, leaving our young girls uncomfortable and afraid to enter them during school. If your board fails to reverse from this present course, I will do everything in my power to protect the children of Stillwater and restore safety and common sense. I urge you to take immediate action to halt your ‘woke’ agenda, rectify this injustice, and put the true needs of our students first.”

The SPS Board of Education has not weighed in on bathroom policy but has in the past approved policy on discrimination, harassment and retaliation as part of the school’s overall policy.

“There is a rumor that a new bathroom policy allowing transgender individuals to use the restroom of their gender identity was instituted this year and not communicated to families,” Washington wrote last week. “That is not true. District restroom protocols are guided by Stillwater Board of Education Policy section D–A, which, aside from a few minor verbiage changes in late 2020, was revised to its current form in August of 2015, including specific language clarifying that Title IX protections include gender identity. These revisions, like all policy revisions, were reviewed and approved at open Board meetings.”

In his letter to the AG, Walters asked for legal action on behalf of all Oklahomans and singled out Stillwater, where he said the board was putting children in danger “for the sake of wokeness.”

“Specifically, I am asking you to order them to stop putting children in grave danger with their bathroom policies. As you are aware, leftists like the ones in Stillwater are abusing court precedent and wielding a blatant misinterpretation of Title IX to push their agenda of letting biological males use girls’ restrooms. This is the latest in the Left’s attempts to move the goalpost,” Walters writes. “Now school districts like Stillwater are perverting the original meaning of Title IX in a way that puts young girls in danger – subverting the true intent of Title IX. Since the Stillwater School Board will not protect their kids, it is up to you to put an end to this and stop the board from putting our children in harm’s way.” 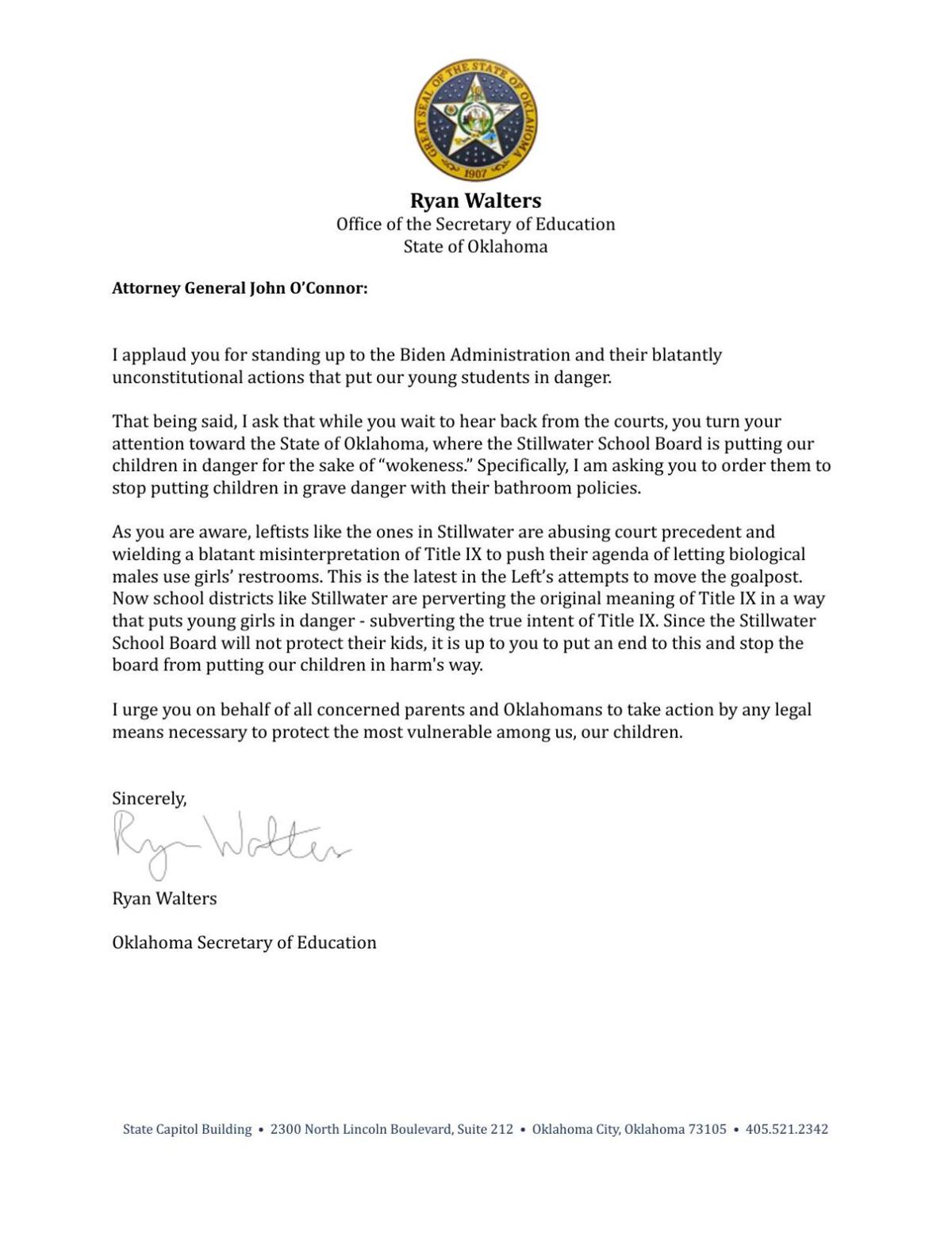 In June 2021, the U.S. Department of Education’s Office for Civil rights issued a Notice of Interpretation that stated the Department “interprets Title IX’s prohibition on sex discrimination to encompass discrimination based on sexual orientation and gender identity.”

The SPS Communications office sent the following statement to the News Press after receiving Walters’ letter:

“Student safety is paramount to Stillwater Public Schools, and we strive to make decisions that are best for our students and community within the confines of the law. In evaluating the district’s established restroom practices referenced in the Oklahoma Secretary of Education’s letter to the Board of Education received April 8, 2022, we have considered the input of our constituents and have received guidance from legal counsel and, most recently, the Oklahoma State Department of Education. Moving forward, we would welcome clear expectations and directives from the state regarding this issue – not only for the benefit of our district, but also the benefit of our peer districts. We will continue to review and assess developing facts and relevant law as we navigate this issue.”

Walters has not responded to messages for comment from the News Press.

On Wednesday, Gov. Kevin Stitt signed into law a bill that requires students in Oklahoma public schools to use the bathroom that matches the g…