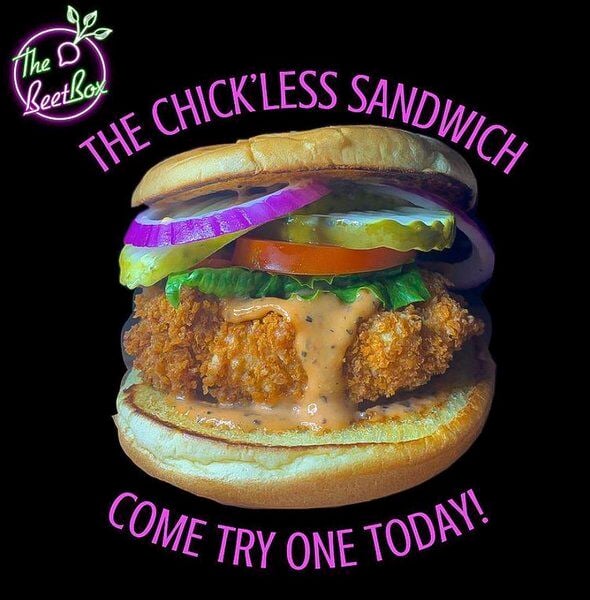 Provided. Beetbox has a Chick'less chicken sandwich packed with 20 grams of protein and 100% plant based. 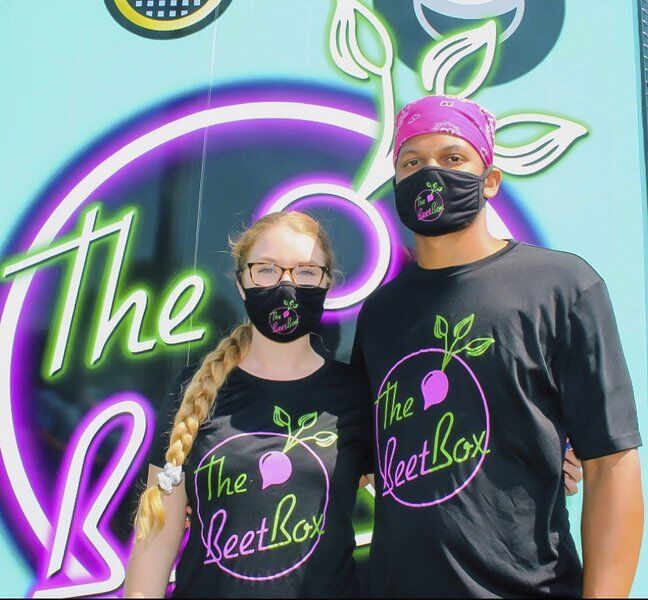 Provided. Gwyneth Yvonne and Randon Moore, Co Owners of Beetbox a vegan food truck have big goals set for 2021, including the possibility of being on Shark Tank.

Provided. Beetbox has a Chick'less chicken sandwich packed with 20 grams of protein and 100% plant based.

Provided. Gwyneth Yvonne and Randon Moore, Co Owners of Beetbox a vegan food truck have big goals set for 2021, including the possibility of being on Shark Tank.

Two young business owners in Stillwater could possibly be on the hit television show Shark Tank.

Randon Moore, 24, and Gwyneth Yvonne, 22, are co-founders of Beetbox, an all-vegan food truck.

Their vegan food has given Oklahoma residents a chance to try healthy alternatives to meat, but consumers still get the flavor of meat.

Moore said he is a big fan of Shark Tank, and when he heard a casting director from the show was holding an entrepreneurial chat room on the new social media app Clubhouse, he didn’t hesitate to join.

Moore then went through Brandon Andrew’s Twitter in order to find where he was holding the chat room.

"Tthere were like 7,000 people in there just waiting to pitch because this is the new way of the casting call,” Moore said.

In the app Clubhouse, only so many people are allowed to talk at once. After Moore realized his chances at presenting his business were slim, he took a “leap of faith.”

“So I just went to his profile and found his email and his cellphone number. I took a leap of faith and just texted him really fast and he actually started texting back,” he said. “I sent him my pitch via text message, my name, where we’re located, my business, my website, pictures of our food and pictures of our truck.”

Moore said Andrew was instantly interested in Beetbox and 30 seconds later, Moore received a notification that it was his turn to take the Clubhouse virtual stage.

“They weren’t really asking about money because they aren’t the real sharks yet, they were just asking you to pitch your idea, who you are, what your business is and what makes you worthy of going on Shark Tank,” Moore said.

Although Moore doesn’t have a definitive answer on if he will present his business in front of the real sharks, he does believe he has a good shot.

“His job was to find minority businesses and business owners. He understood how cattle country Oklahoma is and how much they love their beef and meat. For us to be doing so well with an all vegan menu I think it intrigued his interest,” he said.

With vegan food, it can be difficult to get all the nutritional needs for the human body.

Yvonne went to school for nutrition which Moore said has been helpful in creating recipes.

All their food is made from scratch and Moore and Yvonne are constantly trying new recipes to add to their menu.

“We have vegan chicken patties, shrimp, beef, shredded tacos nachos all the above. We also know that there is a stereotypical thing that they (vegans) just eat salad, cabbage and quinoa and we don't wanna do that,” he said.

Moore’s parents help them with preparing food for the truck, but they aren’t vegan. This has been helpful because Moore has his parents taste test vegan options to ensure non vegans will enjoy it.

Eventually, Moore plans to start direct to consumer shipping and start prepping in a commercial kitchen.

“We want our own commercial kitchen and warehouse where we can produce these in massive quantities instead of just on our food truck and only being able to sell it in Stillwater or OKC or Tulsa,” he said.

Moore said consumer shipping is where the real money is at versus going into stores and having to fight for freezer space.

Moore said he has big plans for Beetbox in the upcoming year, including potentially having a commercial kitchen.

“Being in that commercial kitchen will definitely jumpstart our direct to consumer shipping until we find an actual warehouse,” he said.

Moore would love the chance to be on Shark Tank and have the sharks invest into his business.

“We jokingly say we're changing cattle country one vegan meal at a time. “Even if we don’t get on Shark Tank we are still changing that aspect of cattle country Oklahoma and that’s our end goal,” Moore said.