Impact of COVID-19 on city government 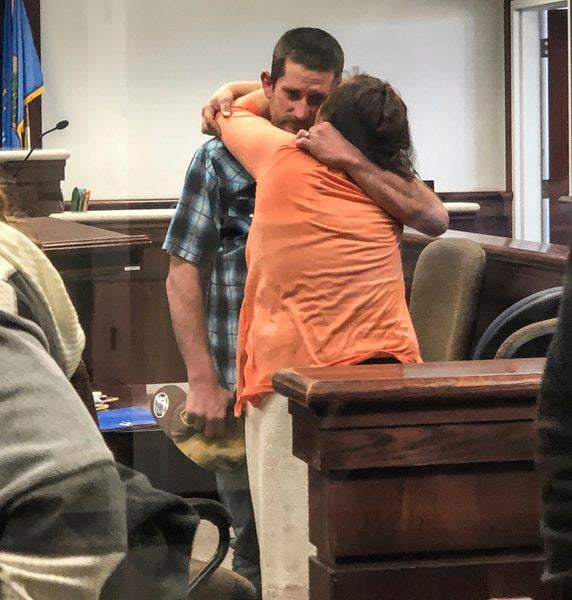 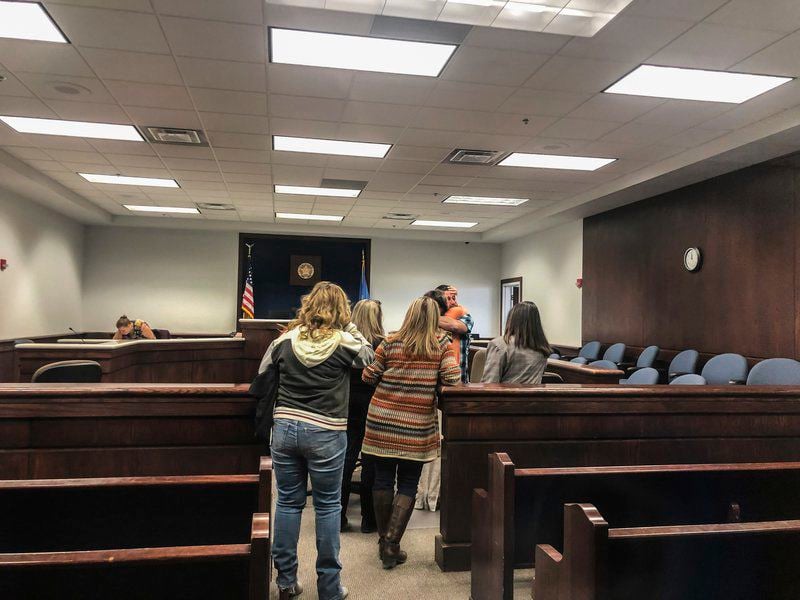 Ashlynd Huffman/ Stillwater News Press Family and friends gather around Dustin and KC Calhoun after the sentencing hearing on Wednesday. 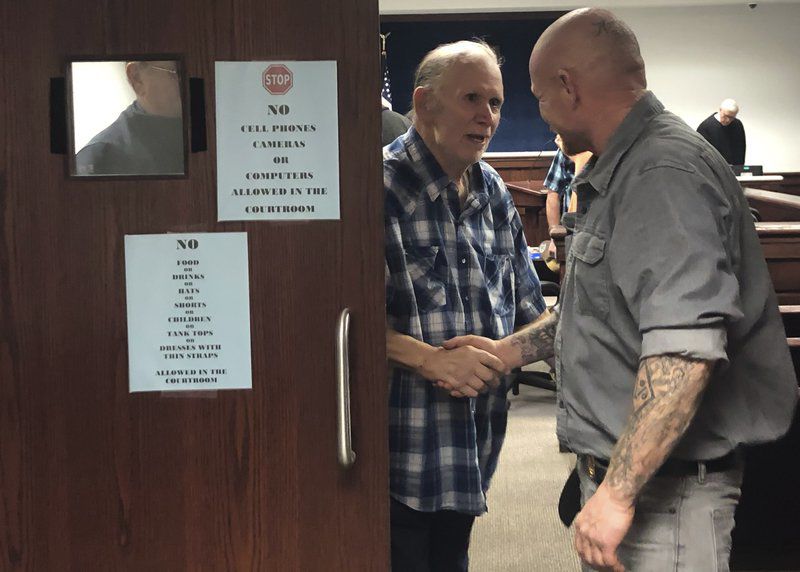 Ashlynd Huffman/ Stillwater News Press A friend shakes the hand of the father-in-law, Dean Beaver after court on Wednesday.

Ashlynd Huffman/ Stillwater News Press Family and friends gather around Dustin and KC Calhoun after the sentencing hearing on Wednesday.

Ashlynd Huffman/ Stillwater News Press A friend shakes the hand of the father-in-law, Dean Beaver after court on Wednesday.

Wednesday, a man charged with manslaughter following a fatal DUI crash in 2016 prepared for sentencing at the Payne County Courthouse.

Dustin Scott Calhoun, 37, from Stillwater, was charged with manslaughter and child endangerment following a traffic fatality in which he was the driver.

According to Calhoun’s testimony during court, he was drinking whiskey before getting behind the wheel.

He had previously entered into a blind plea deal, which means the judge would decide Calhoun’s punishment.

Whiteley is a Stillwater police officer. He was dispatched to the scene of the accident on March 21, 2016.

Whiteley testified that he was told it was an injury accident with a possible ejection. He also said there was a possibility of bleeding.

When Whiteley arrived on scene, he made contact with Calhoun and one of the children involved in the wreck.

In Whiteley’s testimony, he said he was told someone else was still in the car.

“I approached the passenger side vehicle and there was someone still buckled in,” Whiteley said.

Whiteley described the child as having grayish skin, blue lips and no pulse.

According to the officer, Calhoun’s truck hit a tree impacting the passenger side. There were pieces of tree bark and skull remnants inbedded in the tree.

“When I arrived, I saw damage to the vehicle,” Casteel said.

Casteel testified the disturbance in the gravel on the scene indicated excessive speed was one of the factors that contributed to the collision.

The state didn’t have any further witnesses.

The defense presented eight witnesses including Calhoun, and all seven of the character witnesses testified on the behalf of Calhoun. They each had a different role in his life, but one thing remained the same, he shouldn’t be incarcerated.

Kennedy called the first witness, Samuel Moore. Moore was an employer of Calhoun and a friend. He has known Calhoun since 2011.

Moore testified that Calhoun was different before the crash occurred. He would sometimes show up to work and show signs that he had been drinking. According to Moore, Calhoun hasn’t act that way since the accident.

“He’s just a guy that made a mistake,” Moore said.

Melissa Moore also testified on behalf of Calhoun. She is Samuel Moore’s wife.

She testified that she is friends with both Dustin and KC Calhoun, his wife, but she is closer with KC.

Melissa testified that she agreed with her husband’s thoughts regarding Calhoun possibly going to prison.

The state called Krystal Weaver to the stand. Weaver is Calhoun’s sister.

Weaver testified that in the past, Calhoun had struggled with a drinking problem and that so did their father.

“Dustin’s a good father, a good brother and he provides for his family,” Weaver said.

Weaver remembers the day she was called about the crash. Seeing him in that condition with a broken neck and back was a tough sight to see for her.

She said she wasn’t nice to Calhoun at the time because she knew her nephew had died, and knew Calhoun had been intoxicated.

“My brother knows he did wrong, he is going to pay for that for the rest of his life,” Weaver said.

Kennedy called Calhoun’s mother, Karen Allensworth, to the stand to speak on his behalf.

Allensworth testified that the night she found out Calhoun had caused a fatality wreck, it was a blur to her.

When she found out the circumstances of the wreck, she said it broke her heart.

“It broke my heart, my kids knew better,” Allensworth said.

Dean Beaver was called to the stand next to testify. Beaver is KC Calhoun’s father.

Beaver was incarcerated at the time of the collision and was angry at Calhoun.

“I wanted to kill him,” Beaver said.

He told the court that prison wouldn’t benefit Calhoun. He spoke firsthand on the effects of prison and how it would hurt Calhoun in the long run.

KC Calhoun took the stand and told the court why she believed her husband shouldn’t go to prison.

She and Calhoun have been together for 11 years and married since 2017.

She described the relationship between her deceased son and Calhoun. She said her son was Calhoun’s shadow.

Since the accident, she said Calhoun hasn’t been drinking, but he used to struggle with an alcohol problem.

KC told the court it wasn’t about having him financially, but just having him in the home.

She told the court losing him would be detrimental to their family. She said he punishes himself every day, wakes up in the middle of the night crying or hides in the shed crying.

After KC testified, emotions were high for everyone. Judge Kistler called for a 15-minute recess.

Calhoun was the last to testify.

He didn’t deny the charges. Instead, he said he believed he should go to prison if he didn’t have a family to support.

Both attorneys gave their closing arguments before the court.

The state testified that it was here to find justice for the victim, the deceased child, Etherington told the court. Calhoun had been driving recklessly and was intoxicated at the scene. Due to Calhoun’s actions, a child lost his life. Etherington spoke of all the things the child wouldn’t experience. He would never fall in love, get to drive or go to prom.

The defense argued that although he had committed a heinous crime, his family needs him. Putting him in prison would victimize them all over again.

Kennedy told the court that cases can’t be treated in a cookie cutter fashion. This case was different than most manslaughter cases, it needed to be treated differently.

Ultimately since Calhoun had entered into a blind plea, the fate of his future was in Judge Kistler’s hands.

Kistler didn’t excuse the fact that Calhoun had committed a crime, in fact he found Calhoun guilty of all charges against him.

For the manslaughter charge, Calhoun was sentenced to 12 years in the Department of Corrections with all time suspended as long as he follows the rules of his supervised probation.

For the second charge, the court found Calhoun guilty and sentenced him to four years, all time suspended. He also has to pay a $1,000 fine.

Calhoun was also ordered to complete 150 hours of community service, attend counseling, drug and alcohol evaluation and a mental evaluation.

“You owe a lot to your wife for sticking with you and continuing to love you,” Judge Kistler said.