Ashlund Huffman/ Stillwater News Press Several Stillwater officers were dispatched to assist at the scene of a traffic stop on North Main Street and miller Avenue. 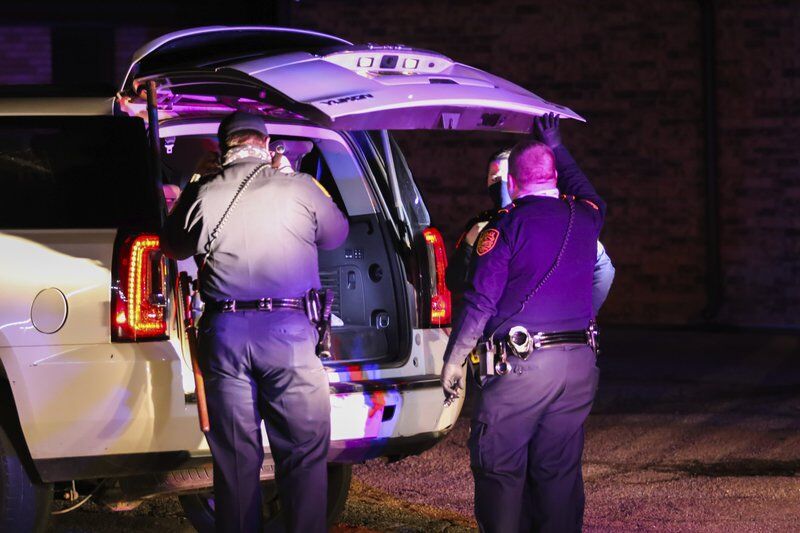 Ashlund Huffman/ Stillwater News Press Several Stillwater officers were dispatched to assist at the scene of a traffic stop on North Main Street and miller Avenue.

The charges filed against him are: trafficking illegal drugs second and subsequent, unlawful possession of controlled drugs with intent to distribute fifth and subsequent, unlawful possession of drug paraphernalia, operating a motor vehicle while under the influence of an intoxicating substance, resisting arrest and operating a motor vehicle without a valid driver's license.

Stillwater Officer Cory Westbrook was patrolling in the area of 400 North Main Street at 5:55 p.m. Nov. 22.

He alleged he observed a white GMC Yukon traveling south on Main Street very slowly and was failing to stay in the lane.

According to the probable cause affidavit, Westbrook positioned his vehicle behind the GMC and the vehicle continued to drift slowly out of its lane.

Westbrook identified the GMC by the Oklahoma license plate and continued observing the vehicle.

“As the vehicle continued traveling south it approached the light at Main Street and Miller Avenue where the vehicle failed to signal its turn as it moved into the eastbound turn lane,” the officer alleged.

According to the affidavit, Westbrook conducted a traffic stop by activating his emergency lights. The vehicle stopped in the eastbound lane of traffic.

The officer wrote in the affidavit that after stopping, he noticed the vehicle being placed in to reverse then slammed back into park.

Westbrook exited his patrol vehicle and walked toward the driver of the GMC.

“I approached the vehicle and was able to observe the driver with his left arm and hand within his front pant area. His eyes appeared to be glassy and bloodshot. I asked him if he was OK,” Westbrook said.

The officer alleged the driver had a thick slurred speech and mumbled something under his breath, but Westbrook couldn't hear what was said.

There was a male passenger in the passenger seat of the vehicle, the affidavit said.

Westbrook said as he was talking with Rice, he observed his hand on the gear shift, as if attempting to drive away.

Westbrook alleged throughout the conversation, Rice stared at him with a blank expression.

According to the affidavit, Westbrook explained to Rice why he was pulled over and asked if he had his license on him.

Rice said he didn’t have his license on him nor did he have a license to operate the vehicle.

Westbrook alleged he could sense Rice becoming agitated so he calmed him by saying driving without a license wasn't a huge deal.

“At this time, I was concerned about his overall demeanor and believed Rice to be under the influence of drugs,” Westbrook wrote in the affidavit.

Still, he asked Rice what his name was and he repeatedly ignored the officers questions.

Westbrook wrote in the affidavit that Rice was becoming more agitated so backup was requested at his location.

“This happened several times as I shouted commands at Rice to stop. I advised him to place the vehicle into park and turn the engine off,” Westbrook alleged.

The passenger in the vehicle got out and did as officers said. He was placed in wrist constraints and put into the back of Knox’s patrol car.

More backup was requested to the scene to assist due to the behavior of Rice.

According to the affidavit, Rice continued to rev the engine which led the officers to believe he was attempting to flee.

The vehicle didn’t move, but wasn’t placed into drive, the affidavit said.

Westbrook continued to shout commands for Rice to stop.

“At this time I was giving Rice commands from the driver side area of my patrol car while he was at gunpoint. Rice refused to comply and remained in his car,” Westbrook alleged.

An additional officer arrived on scene to assist.

Rice was ordered to stick his hands out of the driver side window. He placed one hand but then pulled them back inside the vehicle.

Westbrook alleged he observed a bulge in the front waistline and observed Rice putting his hand over the area in order to conceal the presence of something.

According to the affidavit, Westbrook was concerned that Rice could be armed. Rice was ordered once again to put his hands outside the window and turn the vehicle off.

The affidavit said Rice continued to refuse to place his hands out the window, bit eventually opened the driver side door and got out but didn’t show the officer his hands.

“I raised my tone of voice and began screaming at Rice to show me his hands. I advised him to put his hands up,” Westbrook wrote in the affidavit.

After many attempts to get Rice to comply and the escalating situation, Rice was tased by officer Knox and taken to the ground by Officer Charles Rivas.

The affidavit said a black small case fell from Rice as he was tackled by Rivas.

According to the affidavit, inside the black case were many plastic baggies, a smoking device, medium sized wooden storage container, a diamond vape and four small black vials.

The officers believed the vials contained PCP. The combined weight including packaging of the vials was 14 grams.

The affidavit also said there was white powdery substance in the black case. Officers believed this substance to be crack cocaine and tested positive as crack cocaine. The total weight was 10.8 grams.

According to the affidavit, there was a small red baggy that appeared to have methamphetamine within it. The baggy was tested and was positive for methamphetamine. The total weight was 4.8 grams.

All items found were tested, weighed and placed into Stillwater property.

Bond has not been set and Rice will appear in court Dec. 10 to have counsel.