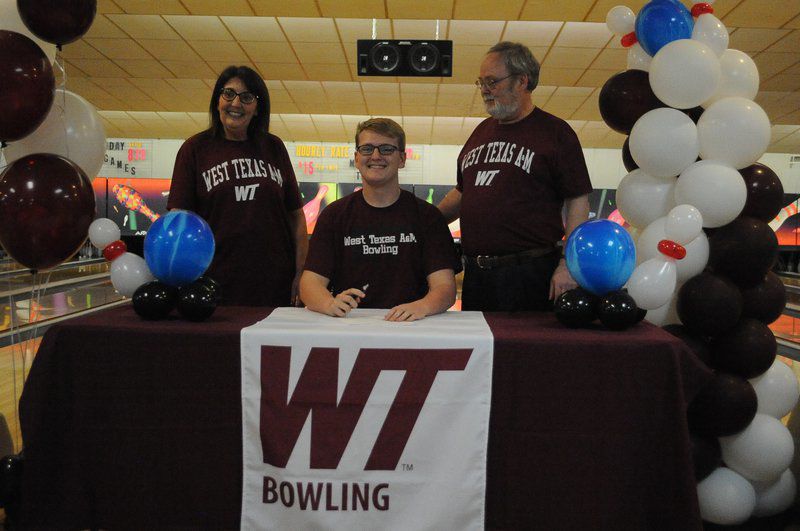 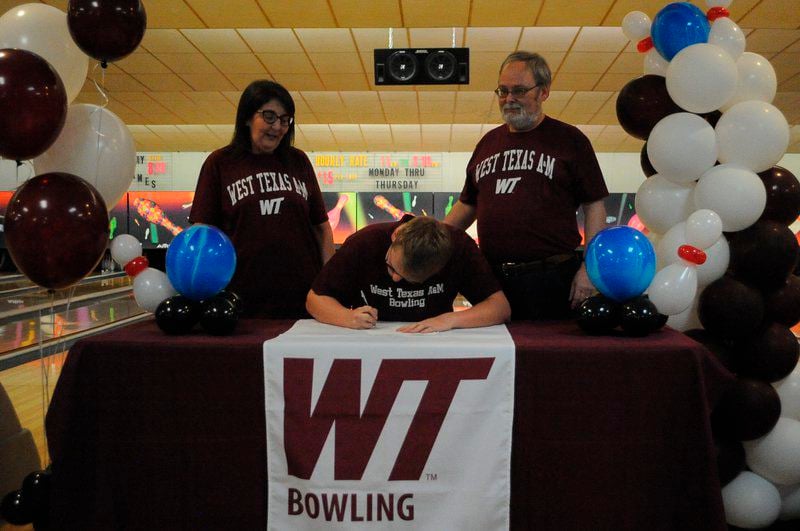 Cameron Jenkins used to love coming to Frontier Lanes as he watched his dad, Woody, play in the local bowling league.

Friday night, it was Woody watching Jenkins sign a National Letter of Intent to bowl collegiately at West Texas A&M. It was fate that the signing happened where it all began – in Frontier Lanes. Jenkins became the only Stillwater High bowler to earn a college scholarship as far as anyone knows, Woody said.

The bowling alley was packed as family, friends, teammates, coaches and teachers all came to see Jenkins make history for the Pioneers.

Frontier Lanes owner Ernie Simmons told the crowd that it was special to see someone he watched grow up on the lanes doing something that no one had even seen before in Stillwater, attributing it to Jenkins’ character.

“Cameron has been a fixture in our youth program for a very long time and started to bowl from a young age,” Simmons said. “It was apparent from the start the sport was something he loved very much. He is a very good bowler, but that is not what makes Cameron special to us. Cameron is a very compassionate person who cares and that carries over to his bowling. He helps teammates in the high school bowling program regularly.”

Jenkins has always loved bowling, but it is not only because his dad and grandpa bowled, but because it is one of the few sports he can participate in.

At age 8, Jenkins had an aortic stenosis in his heart, where the opening of the aortic valve starts to narrow and restrict blood flow. The initial surgery to repair it didn’t work, causing Jenkins to return a year later to get it fixed.

Because of the two open heart surgeries and the fact Jenkins has to take blood thinners, he was told he couldn’t participate in contact sports like football and baseball – which he had played in first grade.

The good thing for Jenkins is he had is bowling team to fall back on, even asking his sister Miranda to hold down a spot on the team while Jenkins was recovering from surgery.

So for him to be going to college for one of the few sports that he was allowed to participate in made the moment even sweeter Friday.

“It is really an amazing thing that I have the opportunity to do something I love for a scholarship,” Jenkins said.

Woody said he and Jenkins’ mother, Kim, were amazed by the support Jenkins got from his friends and coaches he met not only in bowling, but also in swimming, band and even the disc golf club with SHS Principal Uwe Gordon.

“Kim and I have always felt that it takes a village to raise a child and have always told our children to always make good choices,” Woody said. “We feel Cameron’s choices in friends have been exceptional.”

Jenkins’ accomplishments on the lanes include winning the Jack Tate scholarship tournament in Enid, the Stillwater USBC tournament and the state mixed USBC tournament. His favorite achievement was being part of the team that brought Stillwater a state team title in 2017 under coach Dennis Anderson.

Jenkins said he got on West Texas A&M’s radar while he was at junior nationals and stopped by their booth to talked to them, because he knew of their tradition. The Buffs have won seven national titles in the lanes.

“I visited their campus and bowled with the team and felt like it was the perfect place for me,” Jenkins said.

The school is located in Canyon, Texas, just south of Amarillo and near the Palo Duro Canyon, which Jenkins said is beautiful.

“The team seems very friendly and together,” Jenkins said. “They are a close family. The campus is just absolutely beautiful. It is 20 minutes from Palo Duro Canyon. It is peaceful.”

Jenkins is going to school to major in secondary education and planning on adding a mathematics major to that. If he gets better bowling, he said he contemplating even going on the pro circuit.

Bowling professionally might have seemed like a far-off dream growing up, but so was getting a scholarship to do it, so it might just be in the cards for Jenkins.

“It is a little unreal,” Jenkins said. “I don’t think it has really set in yet on the opportunity I have and what I get to do. It will hit me later.”