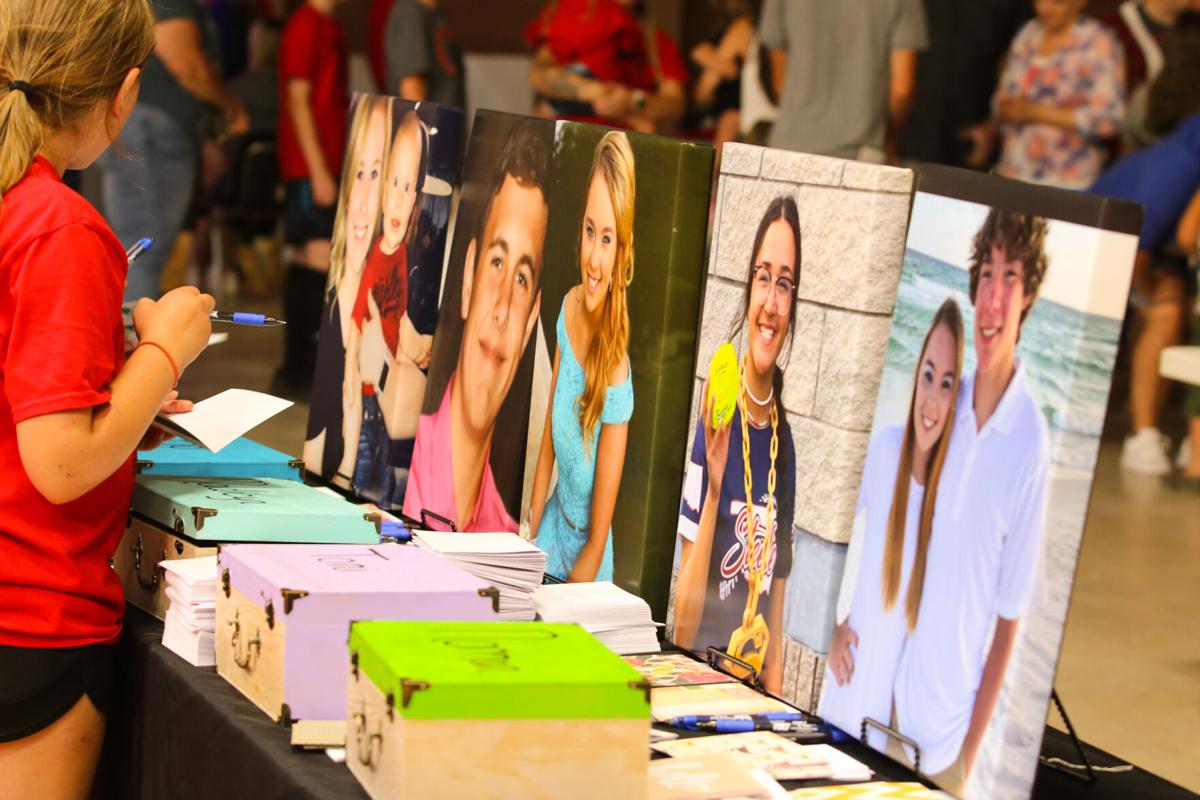 A note writing station was set up at the Morrison Event Center Thursday night where a benefit dinner and live auction was held. 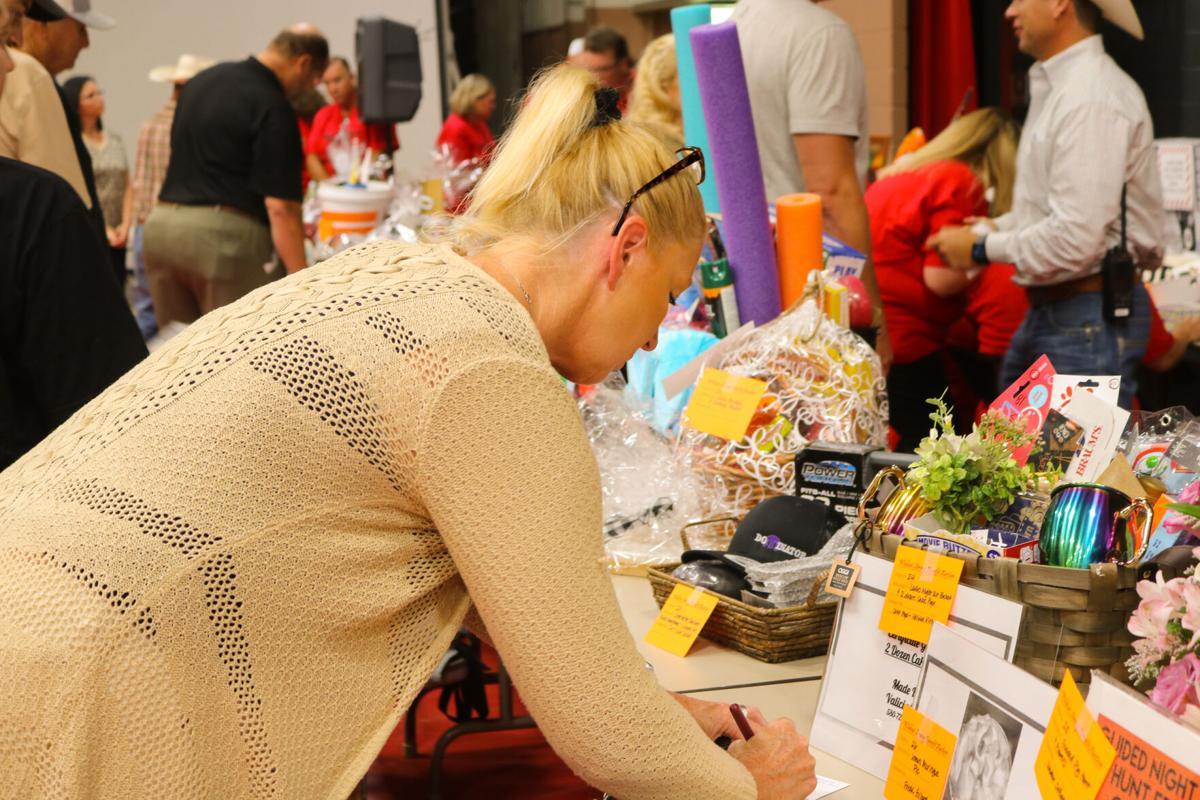 A woman bids on an item Thursday night at the Morrison benefit dinner and auction. 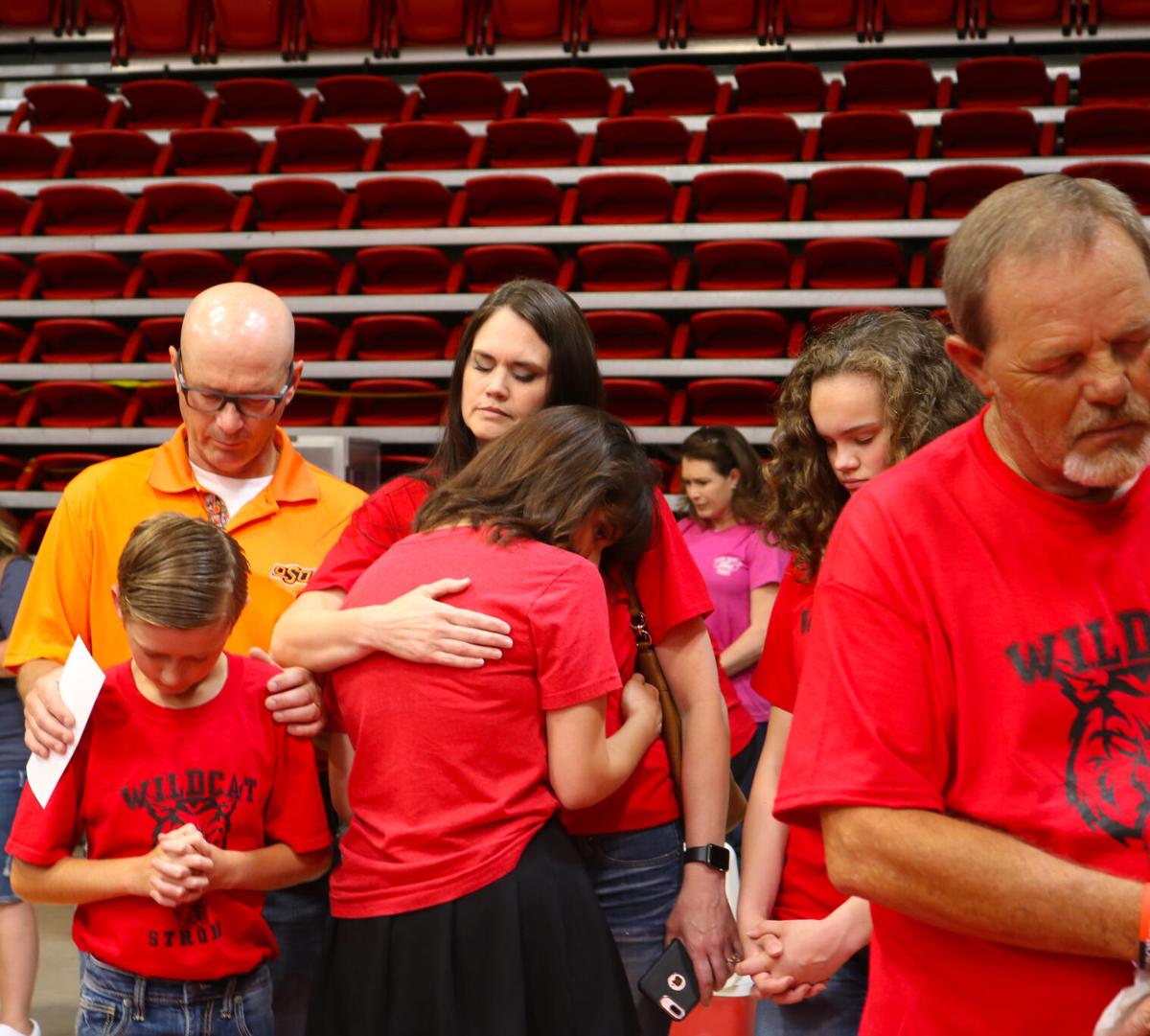 A family hugs during a prayer at the Morrison Event Center where money was raised to help four families who have faced recent tragedies. 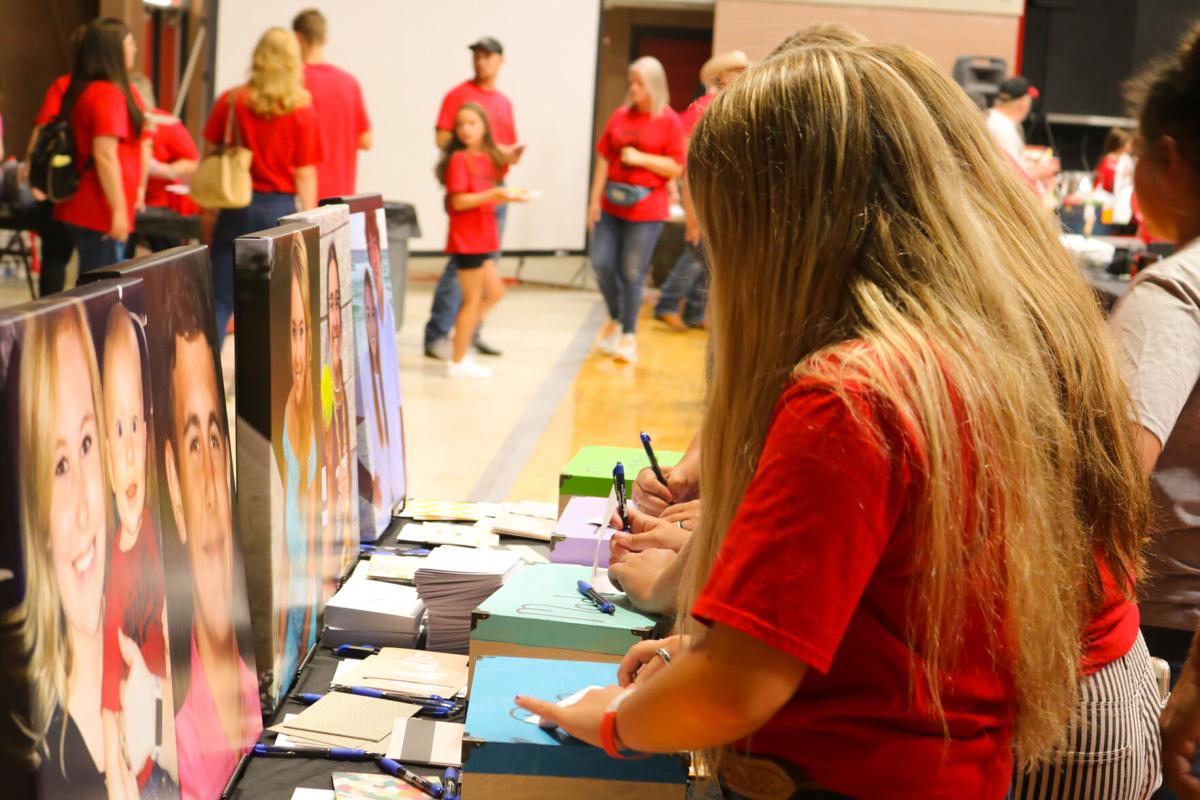 Maddi Hoffman, a friend of Madicyn Lewis who recently passed away in a two-vehicle collision writes a letter to her friend that will go to her family.

A note writing station was set up at the Morrison Event Center Thursday night where a benefit dinner and live auction was held.

A woman bids on an item Thursday night at the Morrison benefit dinner and auction.

A family hugs during a prayer at the Morrison Event Center where money was raised to help four families who have faced recent tragedies.

Maddi Hoffman, a friend of Madicyn Lewis who recently passed away in a two-vehicle collision writes a letter to her friend that will go to her family.

Tragedy struck Morrison after three people were injured and another lost her life in June in Noble County when they were hit head-on by a man later arrested for suspicion of DUI.

Baili Pierce, Bo Galloway and Norman Lewis were all injured in the collision. Madicyn Lewis died in the hospital the following day.

Devree Shiplett, the mother of Norman and Madicyn, posted to social media that Friday that Norman was at home recovering from a leg injury, but Madicyn was “called home Friday morning.”

Galloway suffered several injuries and was recently transported to a Colorado medical facility. The extent of his injuries is unknown, other than he suffered damage to his spinal cord.

Pierce is also back at home with her husband and child after suffering several injuries and undergoing multiple surgeries.

The community in Morrison and surrounding areas came together to help raise money for all the families that were impacted. A benefit dinner and live auction organized by Randee Sloan, Holly Mahon and Mandy Petree has raised $95,000 so far, and Sloan said more donations are still coming in.

In an unrelated incident, Morrison teen Toni Williams was injured after she dove into a pool and hit the bottom of the pool less than 24 hours after the collision. She also will be transported to Colorado with spinal injuries. The fund also benefited Williams' medical expenses.

Pierce, who was driving the night of the collision, talked about what she remembers.

“The car in front of me swerved to the right hand side ditch, and within seconds, I saw the headlights in my lane,” she said. “ My first thought was to go to the left side ditch, that way I didn’t hit the person on the right-hand side ditch. I figured at that point, people had already stopped, and I was correct, that they had already pulled over.”

Pierce teared up as she talked about what took place next after they were hit head on by Paul Forsythe.

“And then I just remember seconds later he hit me and I couldn’t breathe, I think I was just in shock,” Pierce said. “I opened my door, of course, and pulled myself out of the vehicle and laid down on the ground and after that I just sat there and thought, 'What just happened?'”

Pierce said she was in shock and still unsure what had happened.

“Then I heard several people screaming for help, and at that point, I was just waiting for people to come help me,” she said.

After she heard the screaming for help, she said she didn’t remember anything after that until she was jerked awake. Pierce said she originally thought she was transported by an ambulance, but learned she had been transported by Air-Evac.

“I remember being jerked around getting into the helicopter. After that I remember very slightly … people yelling at me to make sure that I was awake, and then I don’t really remember anything after that.”

Due to the impact, Pierce said she wasn’t surprised to hear about the extensive injuries everyone had. She found out several days later that Madicyn had passed away, and she wasn’t able to attend the funeral because she was still in the hospital.

“After all of the information I had found out by then … it wasn’t really a shock. I knew that the injuries were extensive. I knew it was going to be bad,” she said.

Forsythe was arrested for suspected driving under the influence and Pierce described his behavior as child-like. He hasn’t been formally charged, but anticipated charges are one count of first-degree manslaughter and three counts of causing a collision resulting in great bodily injury to another while DUI.

“People need to realize that doing drugs and drinking alcohol before they get into a vehicle to drive, this is the end result of it and it’s not fair,” she said. “It’s not fair for the people who are actually doing the right thing and not doing drugs.”