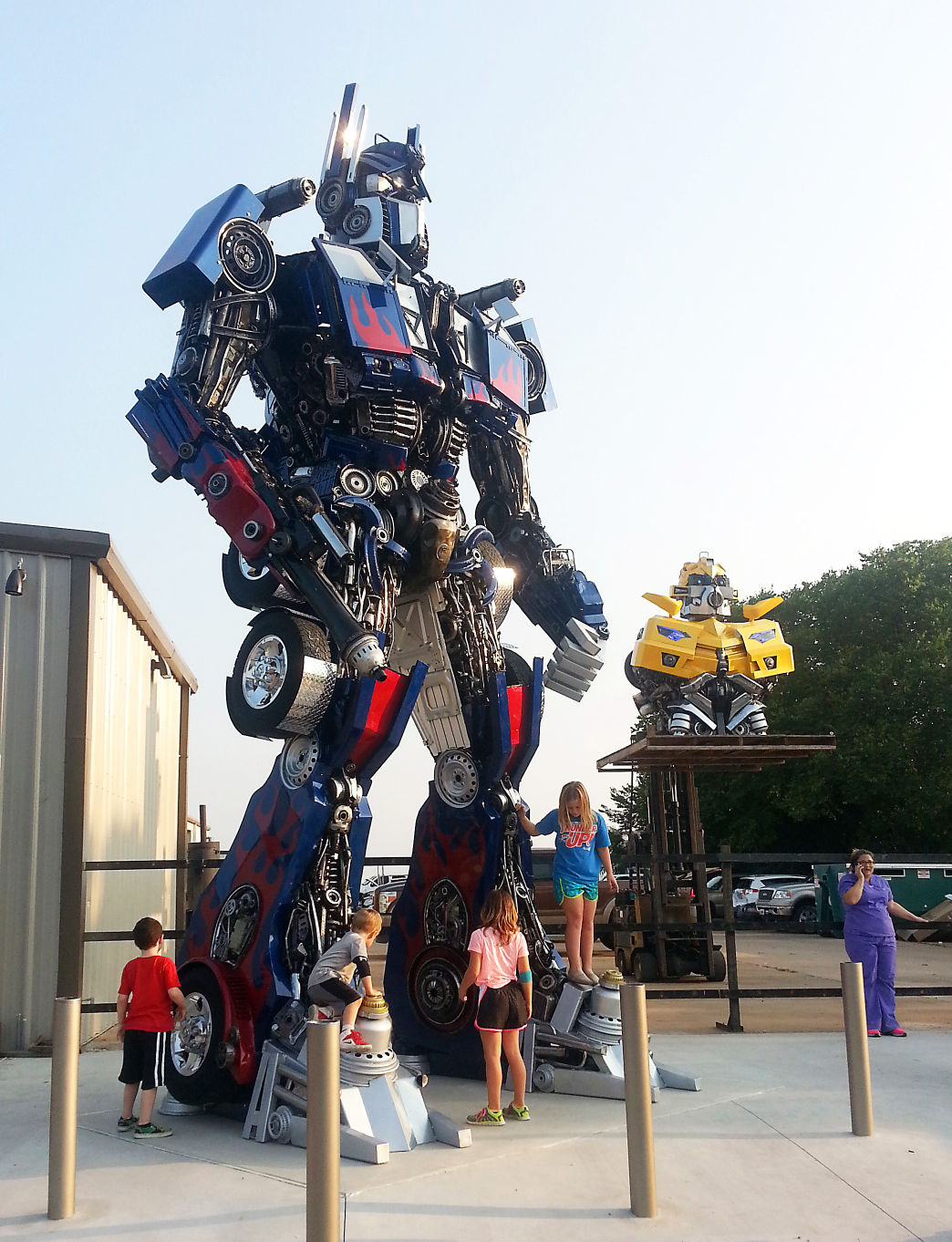 Two giant visitors have been stopping traffic in front of G&M Body Shop since Sunday. The Transformers-inspired statues are made of used auto parts and scrap metal and stand over 20 feet tall. 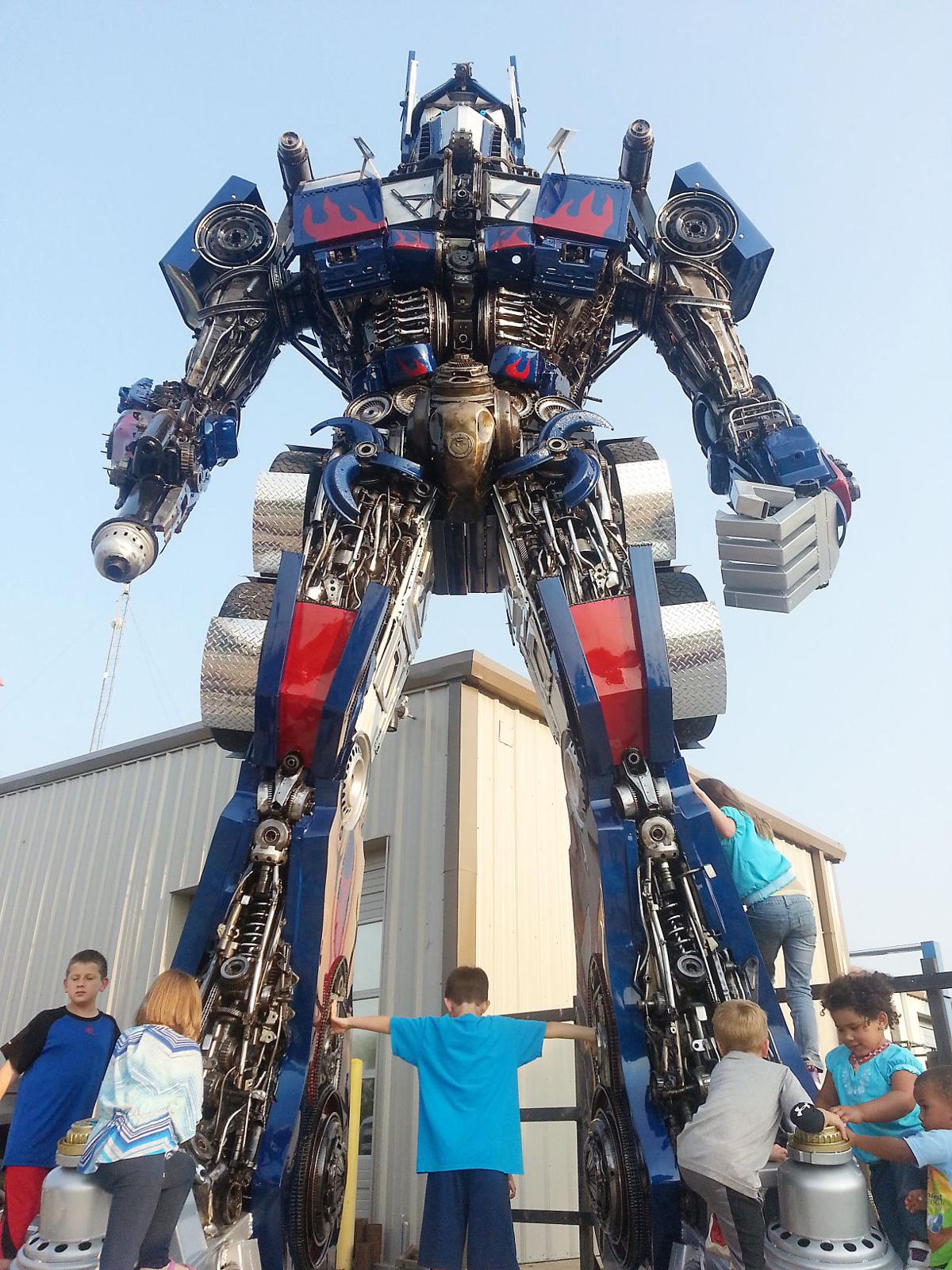 The McCubbin family has been flooded with visitors to their business since unveiling a recycled metal robot sculpture inspired by "Transformers." The 22 foot statue stands sentry in front of G&M Body Shop, 2207 East Sixth Avenue.

Two giant visitors have been stopping traffic in front of G&M Body Shop since Sunday. The Transformers-inspired statues are made of used auto parts and scrap metal and stand over 20 feet tall.

The McCubbin family has been flooded with visitors to their business since unveiling a recycled metal robot sculpture inspired by "Transformers." The 22 foot statue stands sentry in front of G&M Body Shop, 2207 East Sixth Avenue.

If Matt McCubbin had a swear jar to collect fines for the exclamations of people driving by G&M Body Shop this week, he'd be on his way to wealth. The McCubbin family is literally stopping traffic with a giant metal robot sculpture inspired by the movie “Transformers.”

The 22 foot tall robot is on permanent display outside their east side auto body shop and a second robot is being assembled for display at their west side location.

What would motivate someone to buy and refurbish not one but two giant robots?

“It was cool,” Matt McCubbin said.

His dad Mikal McCubbin echoed that sentiment adding, “(Even) If it was a failure it would be the coolest grandkids' toy ever.”

Their adventure began last year when the men saw a giant figure of the Transformers character Optimus Prime on display at Ripley's Believe it or Not in Branson, Missouri.

After being amazed by the two-story figure made from used vehicle parts and scrap metal, Matt McCubbin decided it was perfect for their business and they should buy one.

At first, Mikal wasn't sold on the idea and they dropped it, but he changed his mind after watching an online video about giant Transformers statues.

Locating the firm in Thailand that makes them and negotiating the purchase long-distance was a complicated, stressful process, Matt McCubbin said.

Having them shipped from Thailand was an adventure in itself, costing tens of thousands of dollars, taking several months and involving ships, trains and multiple tractor trailers.

The components got hung up in customs at the Port of Los Angeles for several weeks and were unusual enough to worry customs officials and require a lengthy inspection, they said.

On delivery day, their excitement turned to disappointment when they saw the quality of the construction and the condition of some of the scrap parts used to make the statues.

“We were so amazed by the one in Branson, we didn't even notice the welds,” Matt McCubbin said. “When we went back and looked at the photos we realized it was the same way.”

Feeling they couldn't set something that was poorly constructed out to represent their business, the McCubbins brought both robots into the shop and began rebuilding them.

Mikal turned his years of automotive repair experience to the task of building a robot that was both beautiful and structurally sound.

He and some helpers welded seams, rebuilt lower limbs, replaced rusty parts, reinforced the structure and then soda blasted it before giving it a new custom paint job.

Matt McCubbin said they still haven't calculated the total cost of their project.

The robot has attracted throngs of people to the parking lot of the body shop since being erected Sunday and is drawing attention from the media, including television stations.

The G & M Body Shop Facebook page is filled with messages from people who have questions or comments. Some people are getting in touch to say they're driving in from other towns just to see it.

“Everyone thought we were crazy until yesterday when we put it out,” Matt McCubbin said.

It took a lot of hard work but the family is glad to be able to share it with Stillwater, he said.

The manufacturer told them it has only sold 25 of the largest statues throughout the world, with five being in the United States. The McCubbins own two of them.

Even Matt and Mikal questioned what they were doing at times but now that it's done, they're enjoying the excitement and focusing on finishing the second robot which will go up at the family's west side shop where sons Derek and Trevor work.

The McCubbins are pondering their next big project and say they're patiently waiting for Megan Fox to show up.