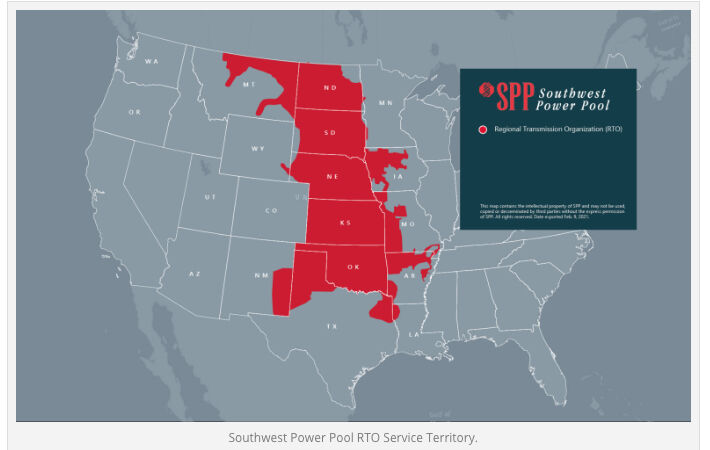 The Southwest Power Pool serves an area stretching from the Canadian border to Texas. The organization, which administers power for the central U.S. is asking power customers to conserve electricity and natural gas beginning at 12 a.m. Monday to ensure the grid has enough power for all customers. Provided 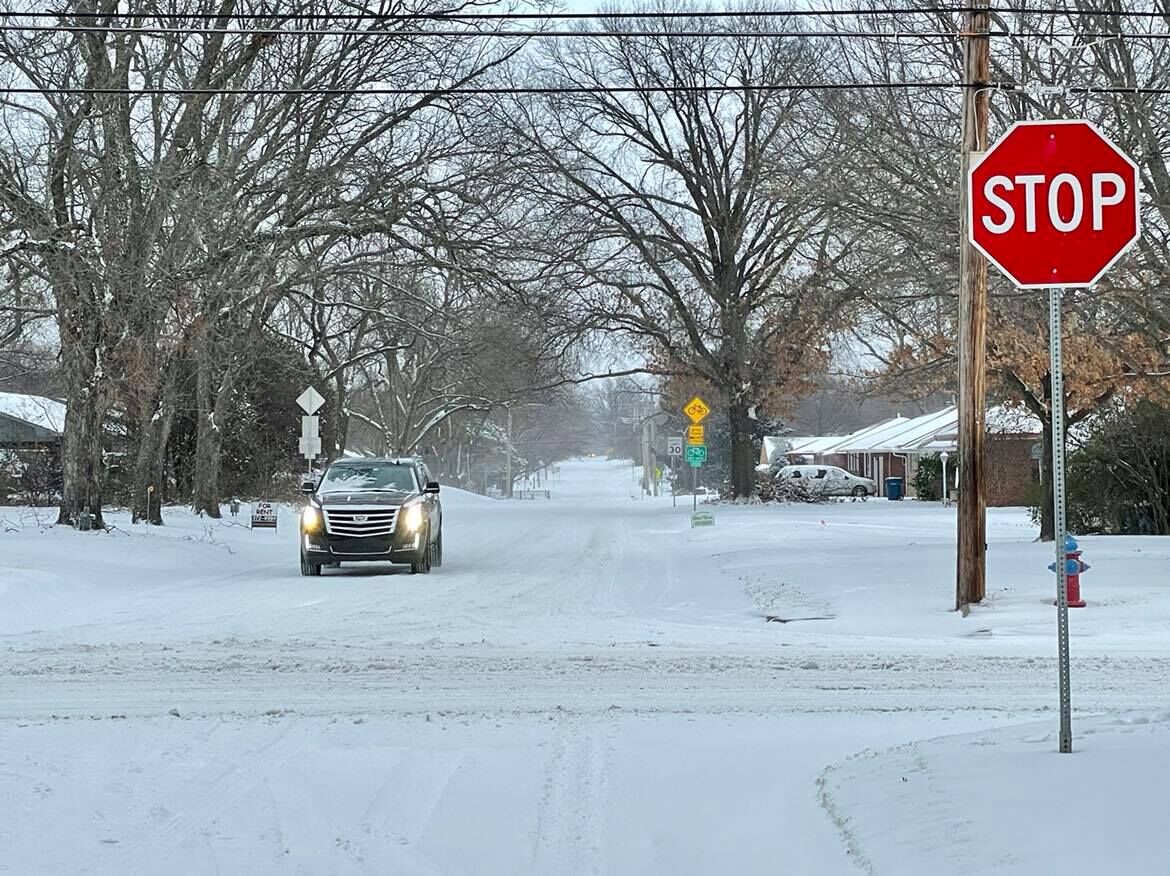 The Southwest Power Pool serves an area stretching from the Canadian border to Texas. The organization, which administers power for the central U.S. is asking power customers to conserve electricity and natural gas beginning at 12 a.m. Monday to ensure the grid has enough power for all customers. Provided

The City of Stillwater is joining other area towns in asking its residents to conserve power and natural gas usage as much as possible to prevent power outages.

By 5 a.m. Monday, the Southwest Power Pool has announced its system will be at Energy Emergency Alert Level 1, signifying the system is under stress. At Level 3, service curtailments – temporary, rolling power outages – could be implemented, City Manager Norman McNickle told the News Press.

Stillwater's gas-fired power plant is operating all three of its generation sets but at some point, the power pool may not be able to provide the cities it serves with as much power as they need, he said.

People across the central U.S. are being asked to cut their use of natural gas and electricity by lowering thermostats and avoiding any unnecessary power usage.

McNickle acknowledged the bitter cold temperatures and the fact that people are staying home due to the weather make it an inconvenient time to be asked to conserve power. But that's exactly why the system is stressed.

"If they don't they may be without power for a period of time," he said. "A planned, rotating curtailment of power is possible if we don't conserve."

McNickle said if an outage becomes necessary in Stillwater, it likely won't be for more than one hour. If another becomes necessary, it would affect a different area and would come hours later. It all depends on how many megawatts Stillwater Electric is losing.

Essential infrastructure like the hospital, nursing homes, police, water plant, etc. would be exempt from any planned curtailment, the City of Stillwater announced Sunday.

It's not just Stillwater or even Oklahoma that is affected by this, McNickle emphasized.

Power providers serving an area stretching from the Canadian border to Texas are asking residents to conserve power during the frigid cold snap affecting much of the Midwest including all of Oklahoma.

A press release from OG&E relays the request from the Southwest Power Pool, the grid operator for a region that covers the central states.

The City of Stillwater also issued a statement Sunday outlining how people can help.

“Stillwater residents and energy users play a key role in helping us avoid any curtailment of service,” McNickle,said. “If we reduce usage through conservation efforts over the next several days, we can dramatically reduce the City’s demand. We urge every Stillwater resident and business to take whatever steps you can to help us through this situation.”

Steps residents can take to conserve their use include:

“We don’t know if or when we might have any curtailments in service,” McNickle said. “We appreciate everyone’s understanding and support during this extreme weather event. We encourage all Stillwater residents to stay safe and stay warm.”

The City of Stillwater is a power client of the Grand River Dam Authority.

The City of Cushing, which also relies on GRDA for its wholesale power, issued a call for its residents to do what they can to conserve power.

"Cushing residents and energy users play a key role in helping us avoid any curtailment of service," Cushing City Manager Terry Brannon said in a statement released Sunday evening. "If we reduce usage through voluntary conservation efforts over the next several days, we can dramatically reduce the City's demand. We urge every Cushing customer to take whatever steps you can to help us through this situation."

Customers of Central Electric Cooperative are not impacted by the alert, CEC Communications Director Larry Mattox told the News Press. The co-op is part of a three-tiered transmission and generation system that is not part of the Southwest Power Pool.

"There may be co-ops who are, depending on who provides power to them, but we are not," Mattox said.

In a social media post last week from the City of Pawnee, first reported by News on 6 journalist Tess Maune, Pawnee said that it had received word from GRDA that demands on natural gas supplies could affect the supply to GRDA-receiving communities and warned of the possibility of alternating shutdowns.

GRDA responded Saturday with a statement from CEO Dan Sullivan, saying GRDA had made no emergency declarations that would require reduction of electricity delivery.

He said GRDA had reached out to its industrial and municipal customers out of an abundance of caution in an effort to highlight the difficulties over the next several days related to extreme cold temperatures.

“During any time of extreme temperatures, hot or cold, conservation measures are taken to reduce peak demand in an effort to preserve system reliability," Sullivan wrote. "Extreme temperatures stress all utility delivery systems whether it is water, electric or natural gas."

GRDA does not make independent decisions about curtailment of electric power delivery to its customers, he said.

By Sunday, GRDA had issued a new statement asking its member utilities to conserve in wake of the Southwest Power Pool's Energy Emergency Alert and warning of possible curtailments.

"The Grand River Dam Authority received notification from the Southwest Power Pool (SPP), the Regional Transmission Operator, and host of the integrated energy market for a 17-state region, that SPP would be declaring an Energy Emergency Alert (EEA) Level 1, effective 5AM Monday, February 15.

"According to SPP, due to the effects of widespread and extreme cold weather across the region, it is asking member utilities, including GRDA, to conserve energy beginning at 12AM central time on Monday, Feb. 15, and for the following 48 hours to mitigate the risk of more widespread and longer-lasting outages.

"SPP had declared a period of conservative operations earlier in the week, prior to today’s EEA1 declaration.

"This declaration means that member utilities are asked to operate conservatively to mitigate any risks as weather conditions worsen. An EEA1 signals that SPP foresees or is experiencing conditions where all available electric generating resources are scheduled to meet firm load obligations and that it may be unable to sustain its required contingency reserves.

"GRDA has relayed this information to its electricity customers, including its wholesale customer communities in Oklahoma. The need to conserve electricity and natural gas is rising to a necessary level to ensure the safety of the region’s electric power grid."

Kenneth Neil Brake, 85, died Wednesday at his home in Stillwater. Visitation will be 1PM to 8PM Monday, February 22, 2021. Funeral services will be 2PM Wednesday, February 24, 2021 at Dighton-Marler Funeral Home, Stillwater.