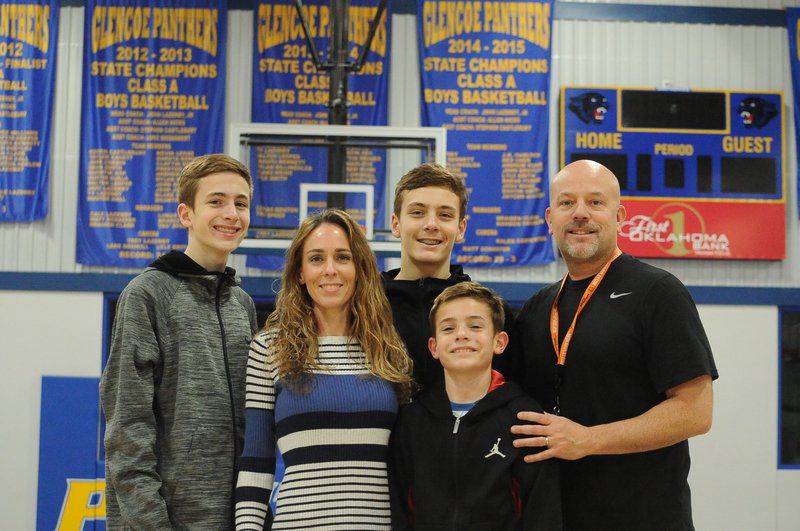 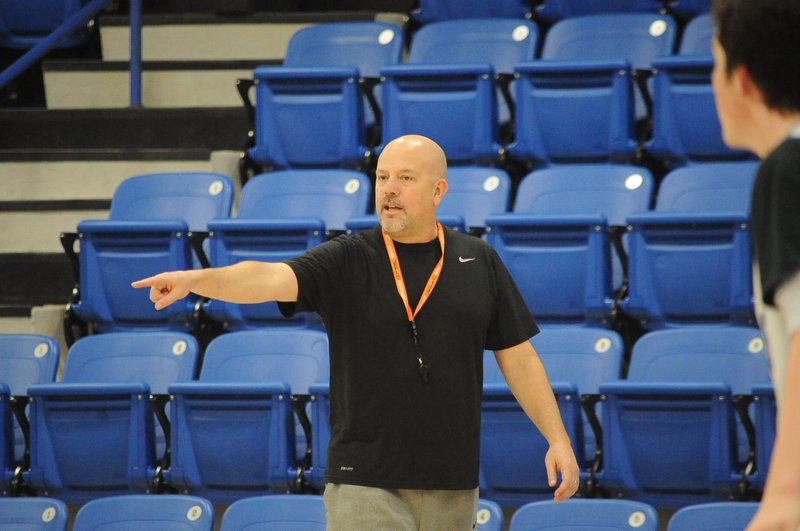 GLENCOE – When Jeff Weedn thought about taking the Glencoe High boys basketball coaching job, he knew there would be big shoes to fill.

After longtime coach John Lazenby retired from the game last spring, Weedn knew there was a big opportunity in the small Payne County town.

Lazenby is still the superintendent at Glencoe, but this year will be the first he won’t be courtside during the school’s annual basketball tournament as Weedn looks to win it in his first season. The tournament started Thursday and runs through Saturday night.

This isn’t the first time Weedn had to take over a tradition-filled program, but he prefers the pressure of success because he has also been at places where there was no tradition. To him, Lazenby’s three state titles with the Panthers is something to strive for.

“Glencoe basketball has been really good for some time,” Weedn said. “I know Mr. Lazenby and his sons had something to do with that. There are really big shoes to fill here. We are going to do our best to fill those and work hard.”

Weedn always knew he was going to be a coach, even when he was playing junior high basketball.

“I had a seventh grade basketball coach who lived down the street from me and I wanted to be him,” Weedn said. “My parents had the greatest influence on me and loved basketball. I knew from an early age that I was either going to play for the Boston Celtics or I was going to be a basketball coach.”

Weedn grew up in Mustang before his family moved to Moore after his dad got a job at the Daily Oklahoman. Weedn played his high school ball there and graduated in 1992.

From there, he went to Rose State College in Midwest City. Weedn and the Raiders made a deep run in the junior college basketball tournament as Weedn played alongside a man named Kwanza Johnson. Johnson ended up going to Tulsa and playing for the great Golden Hurricane teams under coach Tubby Smith with Johnson now on coach Frank Haith’s staff in Tulsa.

After Rose State, Weedn went to Biola University in La Mirada, California, to play for legendary coach Dave Holmquist, who has nearly 1,000 wins over his 45-year career. Weedn learned a lot playing under Holmquist and felt after he graduated, he was ready to get into coaching himself.

Weedn moved back to Oklahoma and got his first coaching position at Western Heights High School in Oklahoma City. Weedn said it was his dream job, being the seventh grade boys basketball coach.

After Western Heights, Weedn returned to his roots as he joined the coaching staff at Moore High under coach Paul Meuser, who was coaching Norman back when Weedn was a player and still remembered him. It was there under the Hall of Fame coach Meuser, where Weedn first met Chad Tsotigh.

Tsotigh played at Moore before he would eventually go on to make a stop in Pawnee before he took the Glencoe girls basketball job a few years ago, another reason Weedn thought about taking the job.

After years of playing and working his way up the coaching tree, Weedn figured in 2004 that it was time to take over his own program. He was hired as the head coach at Okemah in Okfuskee County.

“I figured I could be a coach anywhere, just to give me five guys and I would win because it was that easy because I was that good of a coach,” Weedn said. “Then I got some humble pie and took the job at Okemah who hadn’t had any success really.”

Weedn didn’t know much about Okemah’s history so he called the Tulsa World and the Daily Oklahoman to see what they had in their records.

“They told me it might take some time,” Weedn said. “The phone rang 5 minutes later and The Oklahoman said, ‘Coach that was really easy. It was in 86-87.’ They hadn’t had any success so we dug our heels in and really went to work.”

After winning only five games his first year, Weedn and Okemah improved every year before making the state tournament in 2009, going all the way to the title game and lost to Cascia Hall by 15 points. That loss and a quarterfinal loss to Victory Christian in the 2011 quarterfinals still bothers him because of the two losses being to private schools.

After turning Okemah around, Weedn got a job offer to be a girls coach at Preston, north of Okmulgee. He and his wife, Jennie, decided to go with the tradition there. Preston has a combined 12 basketball championships – seven in girls and five in boys.

“My wife was excited about the move because Preston had a really good school,” Weedn said. “The tradition they have, you won’t find a more tradition rich school than Preston. We went to five tournaments in a row and my third year we won it, the fourth we got runner up because we lost to Jaden Hobbs and Alva.”

After coaching the Lady Pirates for a few years and being named the Tulsa World coach of the year his championship season, Weedn took the boys job at Preston so he could coach his three sons – Jaken, Jaxton and Jaren.

He did that for a few years before he saw Lazenby was retiring and was up for a new challenge. He and Jennie decided to trust their faith and make the move from Preston to Glencoe.

“I have been doing this for a while so it isn’t my first time to take over a job and follow somebody that has had some success,” Weedn said. “That develops over time. It isn’t something I can just do and say, ‘Here is what is going to be different this time.’ As a matter of fact, wouldn’t we wish a lot of things stayed the same with the success? Basketball is basketball. Nobody reinvents it so we are going to try to do the same thing and get the kids to play hard and maximize the talent we have.”

So far through the first half a year the Weedn family has been in Glencoe, they have loved it. Jennie is a fifth grade teacher at the elementary school and Weedn is happy he gets to teach after several years of being a coach/gym teacher only. He teaches history and government at GHS.

“Coach Meuser told me that as a good basketball coach, you have to be a good teacher,” Weedn said. “It is the same. You are teaching the game and the classroom. I have always had that point of view. I can improve in a lot of areas. It is a new balancing act, but a lot of guys do it.”

Weedn gets to coach Jaken, a freshman on the high school team with Jaxton, a seventh grader and Jaren, a fourth grader, coming up. In this area, coaches and their sons have become legendary from Lazenby and his clan, along with Pawnee coach David Page and his boys winning state titles for both the Black Bears and the Yale Bulldogs.

Weedn loves being in an area where small school basketball has so many championship coaches from Lazenby and Page to Bob Weckstein at Frontier and Doug Scott at Ripley.

“Ric Flair said to be the man you got to beat the man,” Weedn said. “I don’t know if we are ever going to beat them and they are all Hall of Fame coaches. What an honor and a privilege to coach against those guys. To watch film and compete against those guys, it is great”