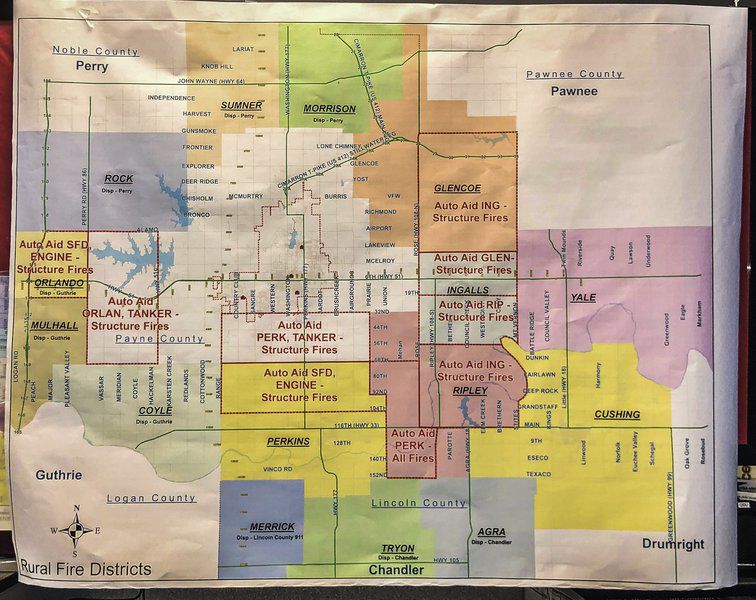 Ashlynd Huffman/ Stillwater News Press Above is the map outlining the jurisdiction for Rural Fire Disticts in Payne County. 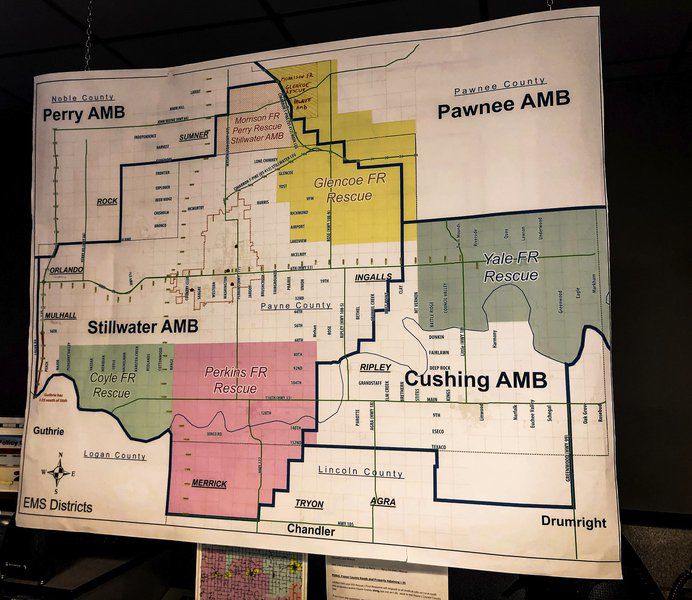 Ashlynd Huffman/ Stillwater News Press Above is the map outlining the jurisdiction for EMS Disticts in Payne County.

Ashlynd Huffman/ Stillwater News Press Above is the map outlining the jurisdiction for Rural Fire Disticts in Payne County.

Ashlynd Huffman/ Stillwater News Press Above is the map outlining the jurisdiction for EMS Disticts in Payne County.

The Payne County dispatchers have a job to do, a job that most of us don’t understand.

The first question that is often asked is what exactly does their job entail?

“The dispatchers have to determine what help you need based on your location, and which responding agency needs to go but that’s different for law enforcement needs, fire department needs and ambulance needs,” Stillwater Police Captain Kyle Gibbs said.

Dispatchers have to decide which agency is needed in the moment, whether that is law enforcement, medical or the fire department.

Brian Porter is the day shift Supervisor for 911 dispatch in Stillwater. He has been working in dispatch for 26 years.

“Jurisdiction is huge whether it be for law enforcement, fire, or EMS response because no matter what the emergency is, the goal is rapid dispatch of emergency personnel of the closest most appropriate responders,” Porter said.

The confusion for most people comes when the dispatchers use the word “jurisdiction” because they may not know what that means.

Gibbs broke down what jurisdiction means for the Stillwater Police Department.

“By state statute I only have authority as a police officer within the city limits of Stillwater, because I work for Stillwater PD," Gibbs said. “Now there is a little bit of gray, we have mutual aid agreements with Payne County Sheriff's office and OSU PD.”

The SPD needs to be requested for assistance to work on car crashes outside the city limits of Stillwater because the jurisdiction for crashes will be in the hands of the Oklahoma Highway Patrol; for Payne County, it would be Troop K.

Gibbs stated that jurisdiction is the easiest for law enforcement, but when medical and fire get involved it’s more complicated.

“That’s one of the things that is critical about 911 dispatching. When someone calls and needs first responders whether it’s police, fire or ambulance the law enforcement part is the easiest," Gibbs said. "Fire and ambulance is when it gets trickier and that’s why dispatchers have big maps."

Of the three agencies, medical takes the highest priority, as soon as the dispatcher is aware that injuries may be present, the caller is immediately transferred to LifeNet’s Communication Center located in Texarkana, Texas.

“What a lot of people in Stillwater and the surrounding area also don’t understand is that the Stillwater ambulance service is a privately contracted private service, it’s not city owned,” Porter said.

What that means is that when a caller is transferred to Texarkana to speak with someone from LifeNet they have to be specific about the details and the location of the accident since they aren’t from Stillwater.

Porter stated he believes the public may have a misconception of what their job is. If they are asking the caller questions, they may not be getting help.

“A lot of people think that as long as dispatchers are asking them questions, that we are not sending help," Porter said. “That is a huge misperception and that’s where the general public doesn't understand our operation and how it works.”

In the case of car accidents, the 911 dispatch system may receive several calls about the same accident within seconds of each other.

When multiple callers are reporting an accident they may not realize that help is already on the way due to previous callers.

Porter and Gibbs both agreed that they want the public to understand what the 911 dispatch system is and how it requires teamwork from everyone involved, including the caller.

“We just have to do the best we can do to answer the calls, we still have to answer all the calls that come through and that’s what the public doesn’t understand," Porter said. “We do need to take steps to better educate the public on how the 911 system works.”

There is a saying in 911 – "seconds save lives and good dispatchers save seconds."

“We take rapid dispatch and response times very seriously. I don’t know how to stress that to the public other than our response times are excellent,” Porter said.