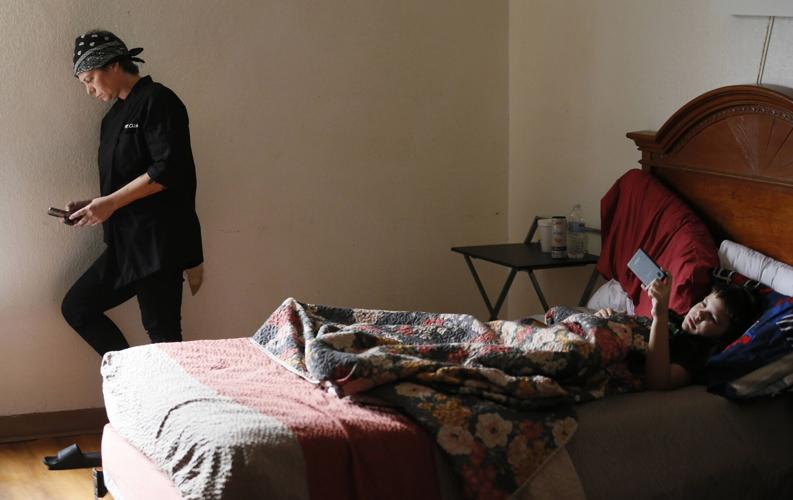 Amy Forsythe, her three children and four pets share a motel room after having recently been evicted from their home in Tulsa.

TULSA – The courtroom is crowded. The hallway, too. Those who arrive early have a seat. The rest stand or pack the hall.

It’s familiar territory for Amy Forsythe. In her previous job, she helped find housing for the homeless and eviction court was a regular stop. Today, Forsythe, 45, is here so the JGS Real Estate Company can evict her from her home.

Most people here are poor. Some groups such as Legal Aid, Restore Hope, Community Cares Partners and the Homeless Alliance attempt to help and many Oklahomans facing eviction do so without legal assistance.

Like Forsythe, many have taken the day off from work in an attempt to keep the roofs over their heads.

Most of the time their efforts are unsuccessful.

Factors that lead to eviction

In Oklahoma, it’s easy to be evicted. Moderate- and low-income families face skyrocketing rent, utility and food prices and the ongoing fallout from the COVID-19 pandemic. The resulting economic storm coupled with a lack of affordable housing and weak protection from Oklahoma’s Landlord Tenant Act has pushed thousands from their homes.

“Evictions are skyrocketing in some areas of Oklahoma, part of a nationwide crisis in affordable housing,” wrote Ryan Gentzler, an analyst for the Oklahoma Policy Institute. “In several counties across the state, including Canadian and Oklahoma counties, evictions in the first half of 2022 were at an all-time high.”

For Forsythe, a mother of five, the trouble began after she was injured on the job. A housing coordinator for Housing Solutions, Forsythe was checking on a client who was living in a shed. She was crossing a fence when her leg was caught and broken.

“I wouldn’t get paid for three weeks at a time,” Forsythe said, “and because of that he evicted me for untimely payments.”

Some help has faded, some is coming

At the beginning of the pandemic, Congress allocated more than $100 million in federal aid and established a federal eviction moratorium. Those efforts helped keep many Oklahoma families in their homes.

Those funds have been spent, the eviction moratorium ended and rent keeps rising. It rose 13.5% in Tulsa and by 15.7% in Oklahoma City since 2021, according to the Oklahoma Policy Institute.

“Oklahoma legislators and judges can amend laws and eviction procedures to ensure the law is being followed consistently statewide and even the playing field,” Gentzler wrote. “Without intervention, it may be years before the eviction wave crests.”

Some help may be on the way.

Tulsa Mayor G.T. Bynum used his state of the city speech on Nov. 15 to announce a two-year, $500 million investment in affordable housing and a new low-barrier shelter for the homeless.

“When I ask the experts in Tulsa what we lack, what is the greatest cause of homelessness in our city, what comes up over and over again is housing,” Bynum said in announcing an initiative to include public funds and private investment incentives.

Evictions take place in Small Claims Court, under the Forcible Entry and Detainer docket. In Tulsa, that docket is held at 2 p.m. on weekdays except for Wednesday. In Oklahoma City, the docket starts at 9 a.m. on weekdays.

The law requires those awaiting eviction to appear in court, with or without an attorney. A tenant’s absence results in a default judgment. Landlords can send a representative. With so many eviction cases happening at once, the judge calls the case number and tenant’s name and often sends them into the hall to negotiate with a representative from the rental property.

The parties are supposed to reach an agreement known as a Judgement Under Advisement, generally allowing the tenant more time to pay what they owe and move out.

Without an agreement, participants return for a bench trial in which both sides can present evidence.

The odds favor the landlord.

Almost 45% of the 1,395 cases filed in Tulsa’s eviction court in January 2020 resulted in default judgments, according to a study by the University of Tulsa’s Terry West Legal Clinic.

Forsythe was officially evicted on Thursday.

She’d already moved her possessions. Whatever didn’t fit in storage, she abandoned.

Part of her eviction agreement includes paying $50 a month until her debt is settled. Even with two jobs, she is behind.

“I have to keep making those payments at the end of each month to keep an eviction off my record,” she said.

Forsythe said she, her three young children and their dogs and cats will stay in a $300-per-week motel off Admiral Boulevard until she gets her tax return sometime in the spring.

“We’re all right now in survival mode because we don’t know what else to do,” she said.

A law that makes evictions ‘fast and cheap’

Tulsa ranked 11th in the nation for eviction filings, according to the Eviction Lab, which collects national housing data. Three other Oklahoma cities were among the top 100: Oklahoma City (20), Norman (83) and Broken Arrow (90).

Many evictions are filed in bulk by a single attorney who represents many landlords.

For attorneys representing landlords, Oklahoma’s Residential Landlord Tenant Act is a sharp weapon. The 1972 version included an anti-retaliation provision that prevents landlords from evicting tenants who complain about the rental property or code violations. Lawmakers stripped those protections in 1978. Today, Oklahoma is one of only six states that doesn’t include anti-retaliation language.

“It makes evictions both fast and cheap,” said Katie Dilks, the executive director of the Oklahoma Access to Justice Foundation.

“Our landlord tenant act is considered one of the five worst in the country,” said Dan Straughn, the executive director of the Homeless Alliance. “Tenants don’t have the right to withhold rent if the unit needs repair and landlords can be bullies. You can get an eviction notice on Monday and be out by Friday.”

It’s difficult for tenants to sue their landlords for failing to maintain the property, Legal Aid attorney Eric Hallett told state lawmakers during a September hearing.

“The number one question I get is, ‘Can I force my landlord to make repairs?’” Hallett said. “Unfortunately, my calls often end with, ‘I can’t force your landlord to do anything because there’s a good possibility you’ll be evicted for asking for repairs.’”