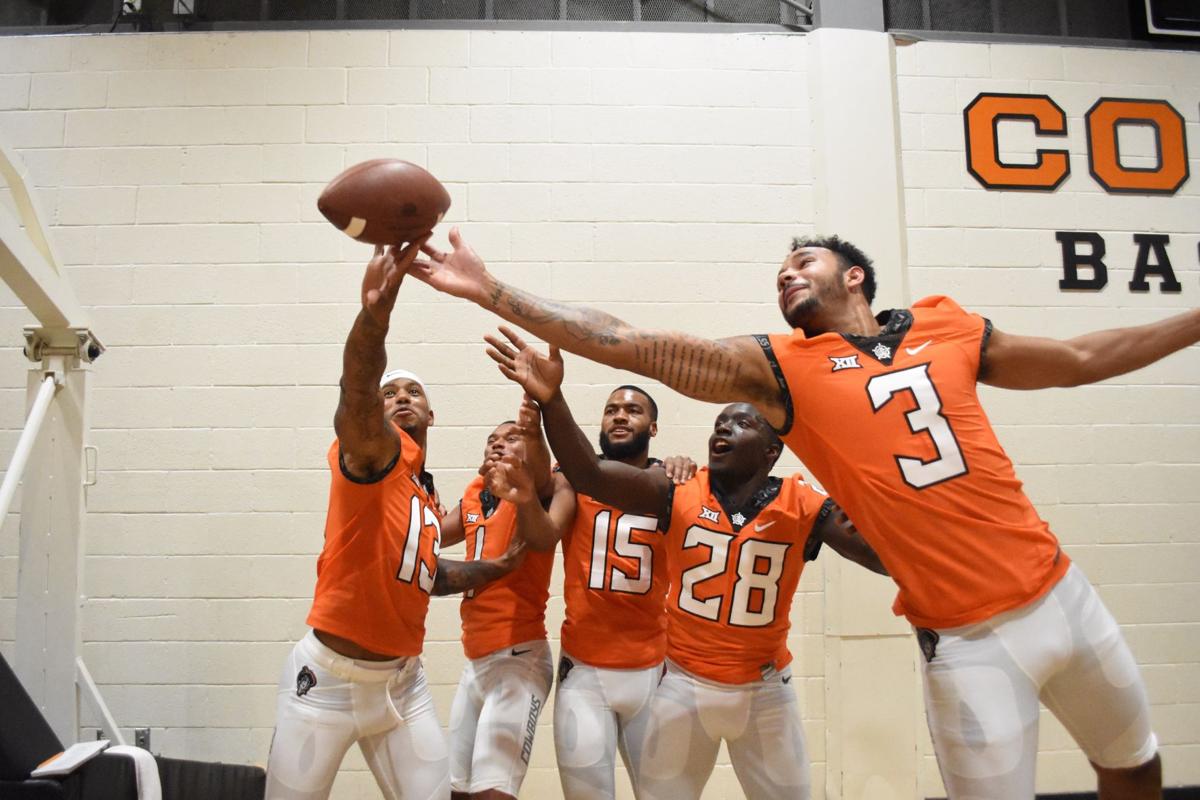 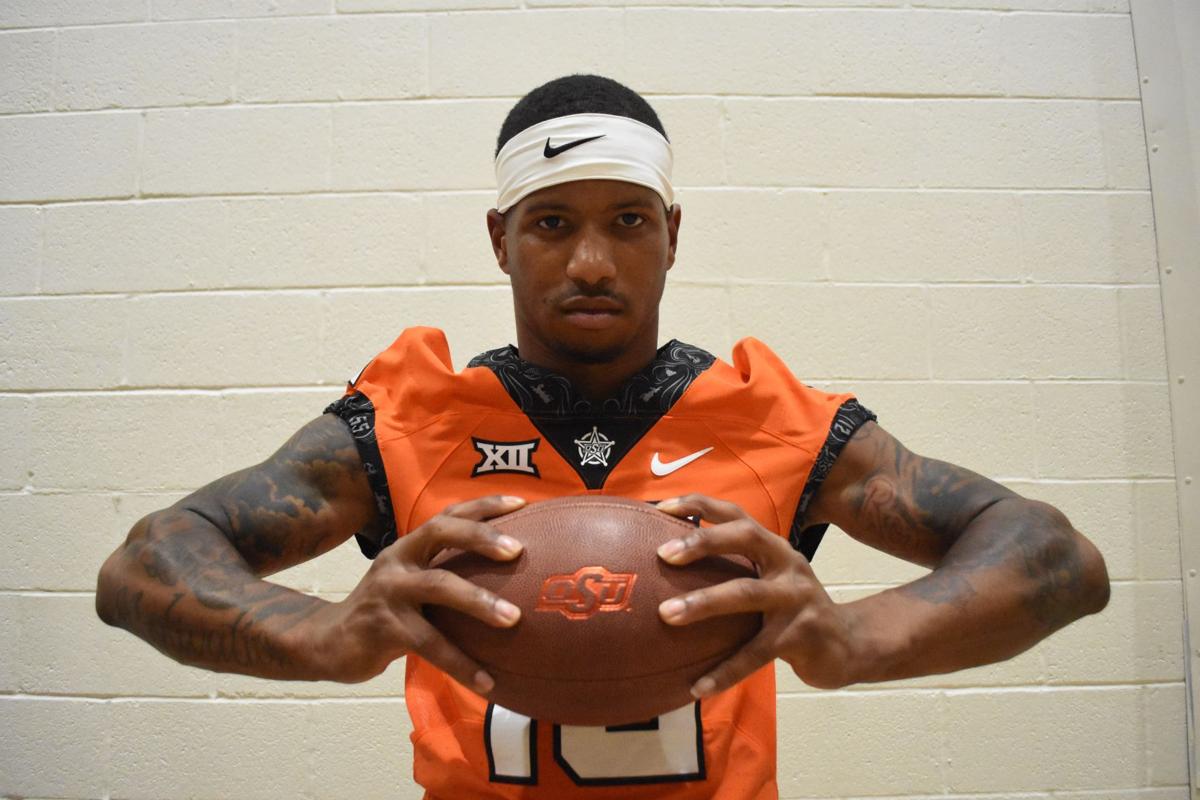 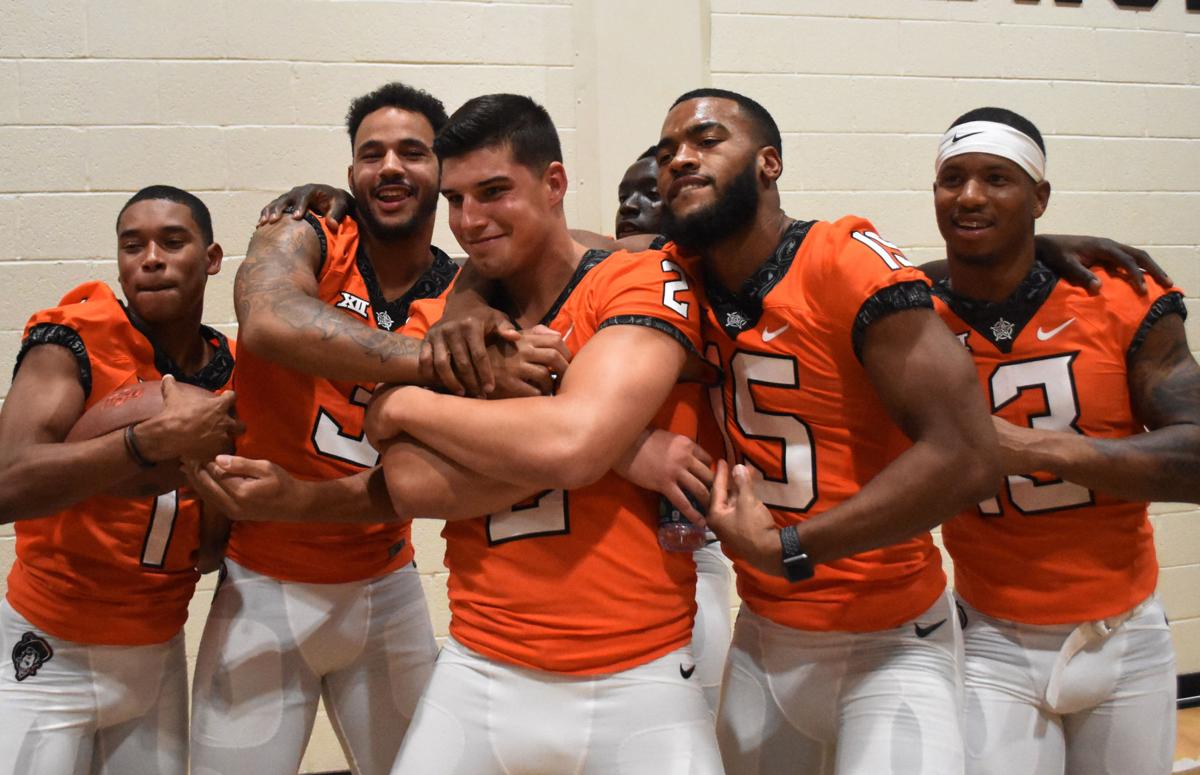 Kasey Dunn has coached some of Oklahoma State’s best offensive weapons during his six seasons in Stillwater.

Some of his star-studded pupils include Justin Blackmon, Josh Stewart and Jhajuan Seales. Blackmon became the 2011 Biletnikoff Award winner during Dunn’s first year on the OSU campus.

Flash forward six years and Dunn has a possible second Biletnikoff Award winner as part of an ensemble that could be Dunn’s most talented group in Stillwater. This year’s wide receiver corps has received plenty of preseason publicity for what it could do this season with senior Mason Rudolph, who’s been named to several preseason award watch lists, throwing the pigskin to them this fall.

The Cowboys know about the hype and they embrace it.

Despite embracing the preseason hype, this group of Cowboys isn’t the bragging type. Wide receivers can often be regarded as cocky and selfish, but not these Cowboys.

That’s one of their best qualities, according to Dunn. It’s one reason he loves coaching this group.

“I don’t think we have any individuals,” Dunn said. “That may not sound very important, but it is, for receivers especially. I think they want to work together and see each other succeed. When they’re on the field, they don’t care if they have one catch or 10 catches. They want us to win first.

“That’s a unique thing for a bunch of wideouts, because they typically all want 10 catches, 150 yards and two touchdowns. But I don’t know if they ever come into the game saying they want to have that statistically. They’d rather say they want ‘X’ amount of knockdowns, they want to win. So for us, that’s the biggest deal.”

Dunn’s receivers agreed about it being an unselfish group. They offered their opinions on why that’s the case at a position that usually wants the glory.

Johnson said running your route properly, even if you aren’t getting the ball, helps the team, and that’s the ultimate goal.

“Your route may be key to get another guy open,” Johnson said. “So, it takes unselfishness to play receiver with a group of guys like this. Sometimes you have to sacrifice your speed and your energy to get someone else open on the field.

Senior Chris Lacy attributed the unselfish nature to the brotherhood of the group.

Lacy is one of the Cowboys who enjoys doing the dirty work to enable his teammates better results. Several of his highlights from the 2016 season include his downfield blocking from teammates James Washington and Jalen McCleskey – both Biletnikoff Award watch list recipients.

“We emphasize blocking a lot at practice,” Lacy said. “Whenever I’m not getting the ball, I just try and impact the play to help us get a first down or get in the end zone. I just try to do my job on the field.”

According to Dunn, the Cowboys have six receivers who will receive the bulk of the playing time this fall. A few others could see minutes, but it’s unknown how much time they’ll see entering the season.

“I don’t know how many guys we have that can play in and play out or across the country can make that deep ball catch like that – fade to it late and make the catch extended,” Dunn said. “Then you know what else he does – like when he runs a post – how often do you see him get caught on a post? I challenge you to go back and look. I don’t know if it’s ever happened.

“He has this ability to catch it and right as soon as he catches it, he kind of flares a bit, kind of like a bubble. He just buys himself a little bit of space to get his speed back up again, where as a lot of kids will catch it and stay on that line. Then the defender stays on that line and catches up for the tackle. James catches it and flares at it, and then he’s too fast.”

“He’s really good with the run after catch, but with the short area throws we want to get Jalen, I think that’s the biggest deal for him – to take some intermediate balls and go the distance with them,” Dunn said. “He’s got great speed and he’s elusive, but it would be good for him to do that.

“The other thing for him is for him to show up as a punt returner and make three, four or five game-changing, momentum-changing plays throughout the year. I think that’s a big factor for him, because if he wants to play at the next level, he’s got to be a specialist. I think that’s where his focus is coming into the season.”

“Chris is confident, whereas last year I don’t think he truly had the confidence coming into the season,” Dunn said. “He may have, but as soon as you start backing it up, then you start to really believe in yourself as a player. He was dominant for us last year. He caught everything that we threw his way and he blocked the hell out of people. He was mean and violent and all of that. I’m looking forward to seeing what he does this year, because I think he can do more than what he did last year.”

“Marcell is a damn monster,” Dunn said. “He’s 6-4.5 and 220 or 225. He’s dying to get out there. He’s playing great. He’s working out really well. It’s unfortunate that he got hurt last year, because I thought he was having probably the best summer of all the wideouts last year before he got hurt. I think he’s hungry to get out there and get going.”

“The guy I’m telling you right now that’s getting after it is Dillon Stoner,” Dunn said. “I’d be surprised if he doesn’t make a bunch of plays for us this year with the game in the balance. He’s pretty icy. He’s got that demeanor – all business. I’m excited to see him. He’s the one I’m really curious to see how much he can step forward.”

A few others who could contribute include Tyrell Alexander, Tylan Wallace, LC Greenwood and Braydon Johnson. Dunn wasn’t sure how much time they’ll see, but all four are potential weapons for the Cowboys.

“Those top six guys, if they stay healthy, I suspect they’ll take the majority of the snaps,” Dunn said. “I’m not worried if one of those guys has to go out.”