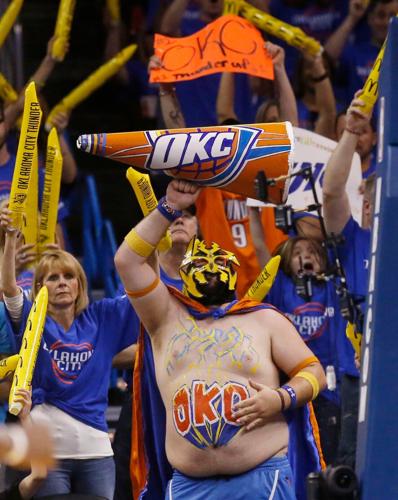 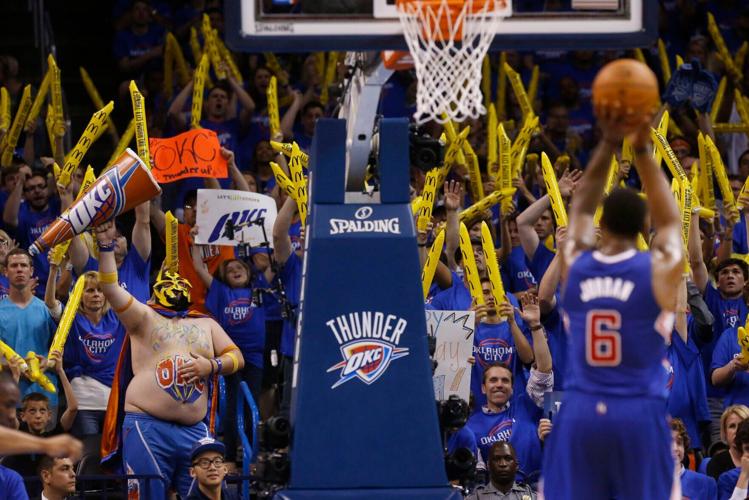 Anyone that has attended or watched an Oklahoma City Thunder home game has likely seen Garrett Haviland in the stands.

The paint-decorated superfan, known more famously as “Thundor”, has become a fixture at Thunder games. He wears a mask and cape, and he can be regularly seen and heard both at the arena and on the television broadcast screeching an audible “whoop” through his accessorized blue-and-orange megaphone.

Haviland has gained notoriety — both on the local and national level — by distracting opposing players whenever they attempt free throws. The motivation is to interrupt a player’s routine in hopes that they miss.

Haviland created the costume to enter into an ultimate Thunder fan competition the team advertised during its first season 15 years ago. With Rumble the Bison not debuting until later in the season, the newly-moved franchise needed creative superfans to masquerade as mascots.

“It actually started with a Halloween costume,” Haviland said. “I had this knockoff 'Nacho Libre' costume. I made some adjustments and came up with my own logo and spray painted on the chest piece.”

For his large megaphone, Haviland said a bit of fate was involved with its discovery. He spotted it at the house of a friend, a former cheerleader.

Haviland didn’t win the contest, but over time, he wrote himself into Thunder lore with his heckling and distinctive attire.

Haviland has screamed at hundreds of NBA players. But he vividly remembers one of his earliest encounters with then-Los Angeles Clippers center, Chris Kaman.

“I was a little bit more bold in those days,” Haviland said. “I called him ‘Chris Caveman’ because he looks like a Neanderthal.”

Haviland’s lore easily grew in the 2010s. Back then, the Thunder were a perennial championship contender and their games were regularly broadcast on national television.

The highlight of Thundor’s run came during the 2014 Western Conference Finals.

After the Thunder won Game 3 at home against the San Antonio Spurs to cut their series deficit to 2-1, Thundor joined “NBA on TNT” television hosts Ernie Johnson, Charles Barkley, Shaquille O’Neal and Kenny Smith for an interview.

“They pulled me onto the stage,” Haviland said. “During the interview, to kind of catch me off guard, Shaq bit me on my left side, which was highly unexpected, so I let out a really weird Pillsbury Doughboy-esque sound on national television, so that was great.”

While Thundor gained local celebrity status and gets asked dozens of times in each home game to take photos, Haviland — the person — is still relatively unknown.

So who exactly is the man behind the mask? Just like fictional superheroes, Thundor lives a double life.

When the Thunder isn’t playing at home, Haviland works with disabled individuals as a social worker. Before that, he oversaw groups of homeless teenagers with the Oklahoma Human Services Department and Child Protective Services.

On game days, Haviland rushes after work to the nearest gas station to suit up in a bathroom stall.

“I'm not cool like Superman,” Haviland joked. “I don't have a phone booth that I can hop into and change.”

Thundor isn’t just a way to express his fandom. Haviland also uses his alias as a stress reliever.

“In my career, working in social services, you always have to present a very calm demeanor,” Haviland said. “When I'm at a Thunder game, it's my way to just let it all out and just get a nice release for all the bottled-up stress that I may feel throughout the day.”

Besides the fun and fame that comes with his alter ego, Haviland also uses Thundor as a positive body image example.

“As a bigger guy, I grew up always wanting to swim with my shirt on,” Haviland said. “As goofy as I might be and how outrageous my antics might be, deep down, I still like to promote body positivity and feeling confident in yourself. If I can take the thing that I’m most uncomfortable with and make that something that can entertain others or be a distraction for free throw shooters, then I took a negative into a positive.”

With the Thunder currently in the third season of a rebuild, the franchise has taken a backseat to the other 29 teams in the league in terms of national relevance.

This also means an entire generation of fans is unfamiliar with Thundor’s antics.

The Thunder rebuild looks bright with the core of Shai Gilgeous-Alexander, Chet Holmgren and Josh Giddey. Haviland is excited to experience a playoff atmosphere at Paycom Center once again, whenever that day comes.

“I remember when the Thunder first came here and won 23 games, a lot of people were like, ‘I'm glad we have an NBA team but geez, I wish we could win,’” Haviland said. “The next thing you know, they're turning it around, and every year they're improving in the playoffs. I think this team has that same mentality. Once they get a taste of it, they're gonna show improvement. I just look forward to watching them grow and improve.”

Clemente Almanza is a sports reporter intern for The Transcript. You can reach him via email at calmanza@normantranscript.com or on Twitter @CAlmanza1007