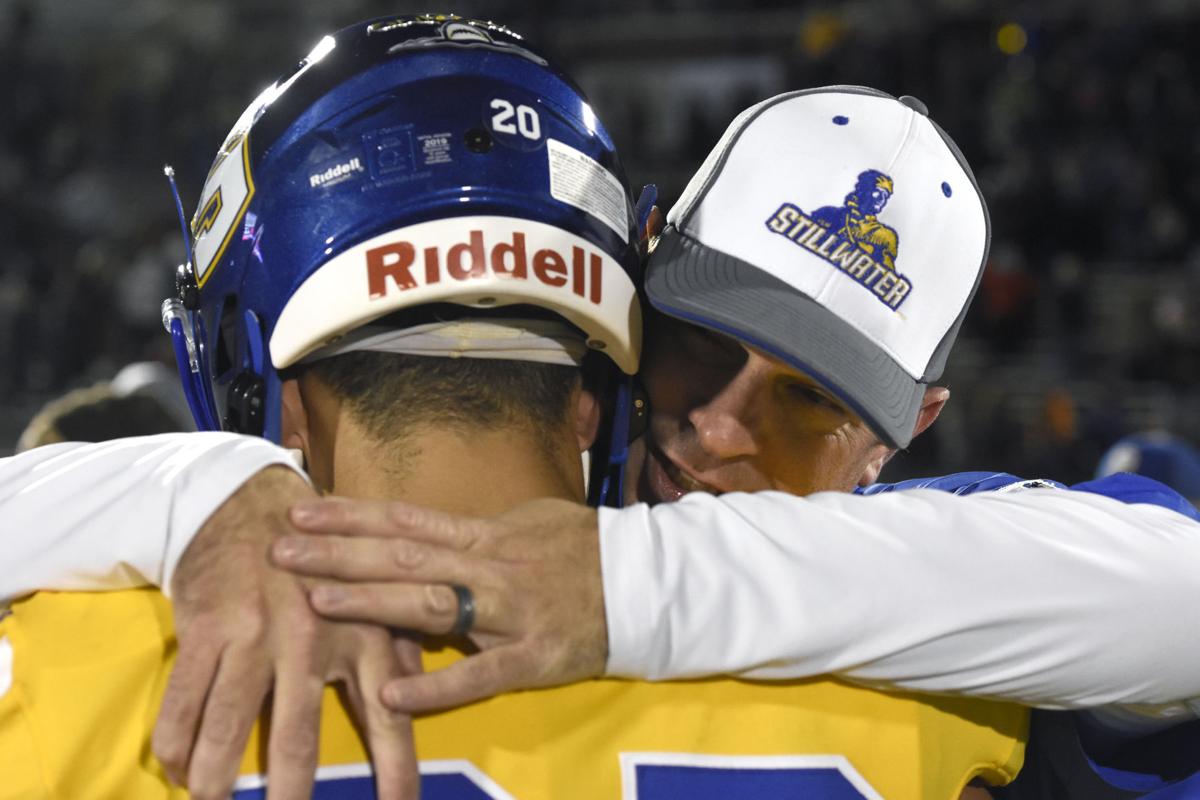 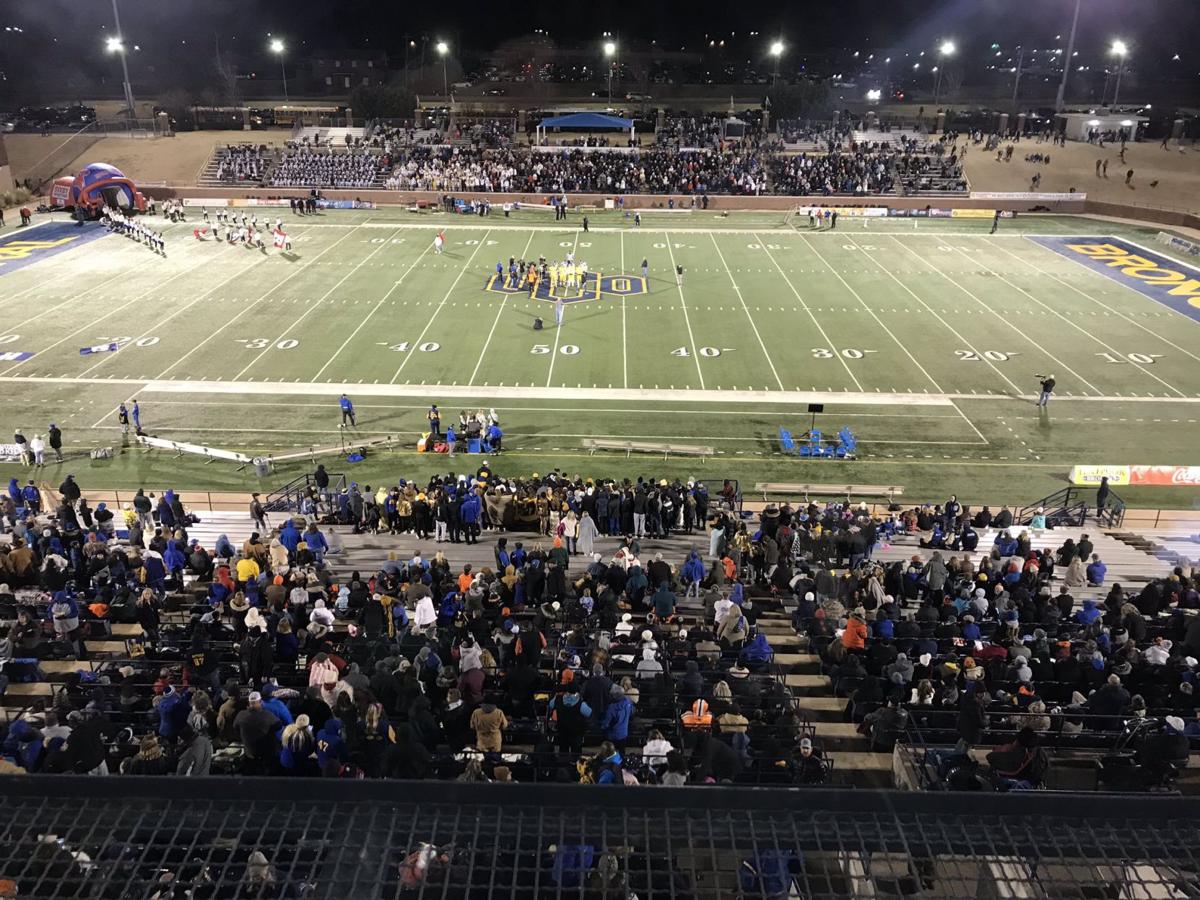 Stillwater and Bixby captains meet at midfield of Wantland Stadium in Edmond. 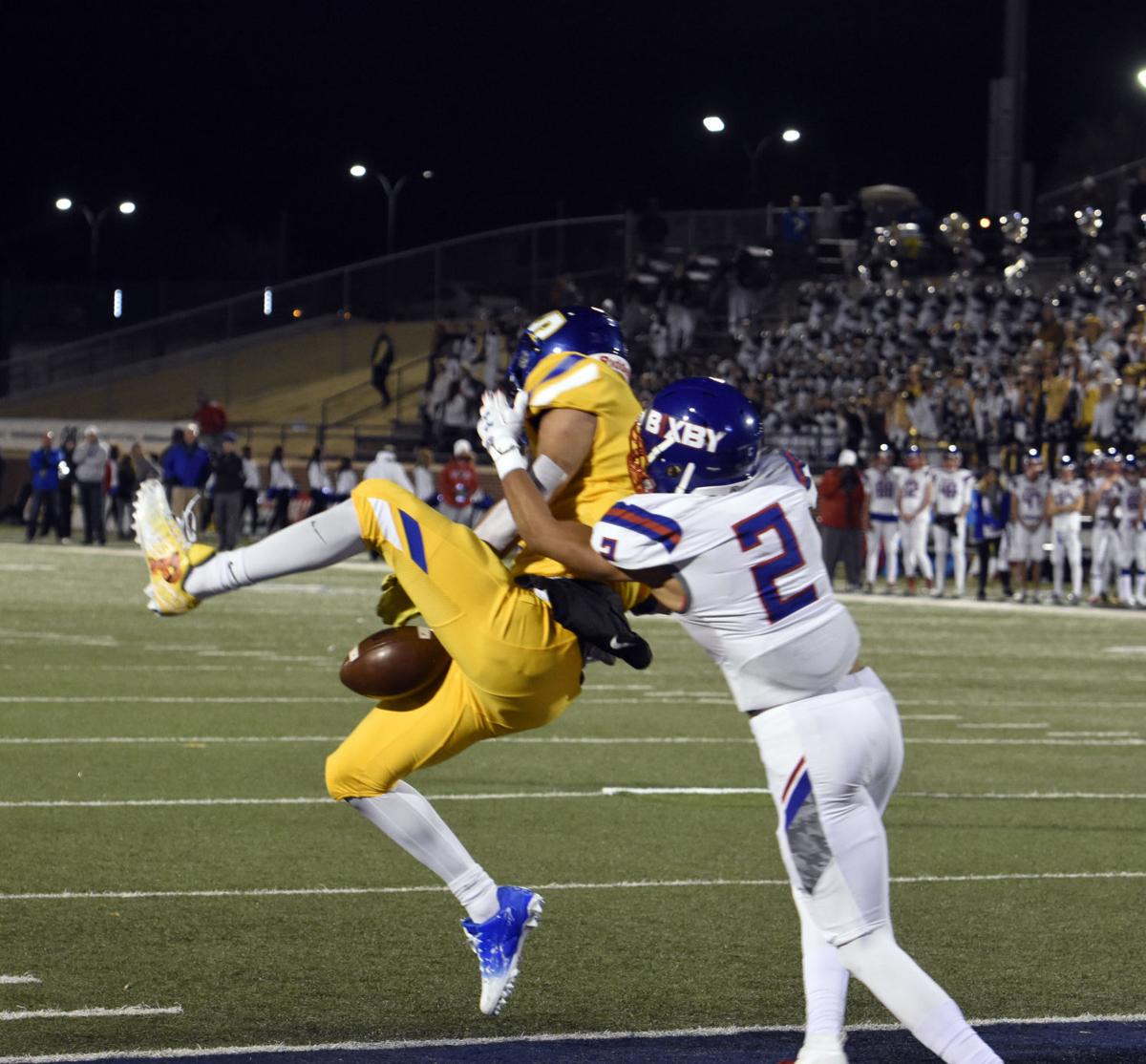 Stillwater High senior wide receiver Anthony Bland catches a pass between his legs and retains control of it to the ground for the Pioneers’ first touchdown against Bixby on Friday night in the Class 6A-II State Championship. 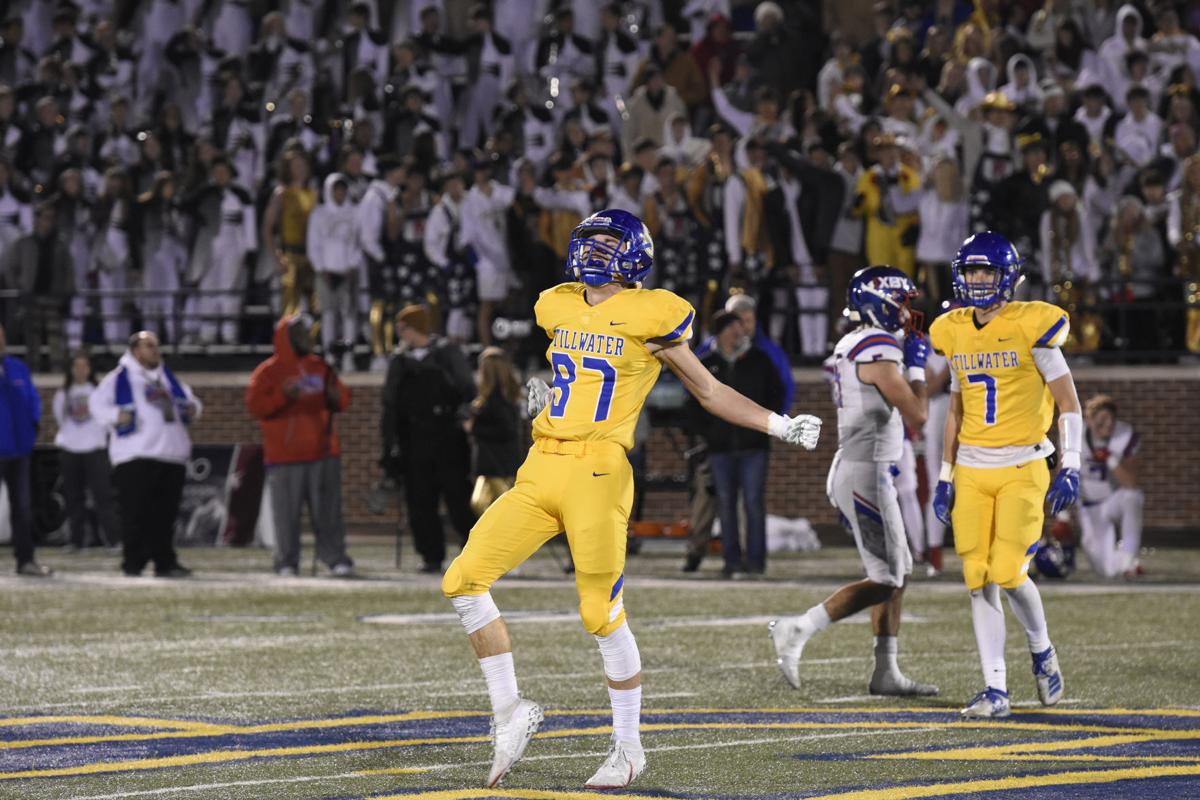 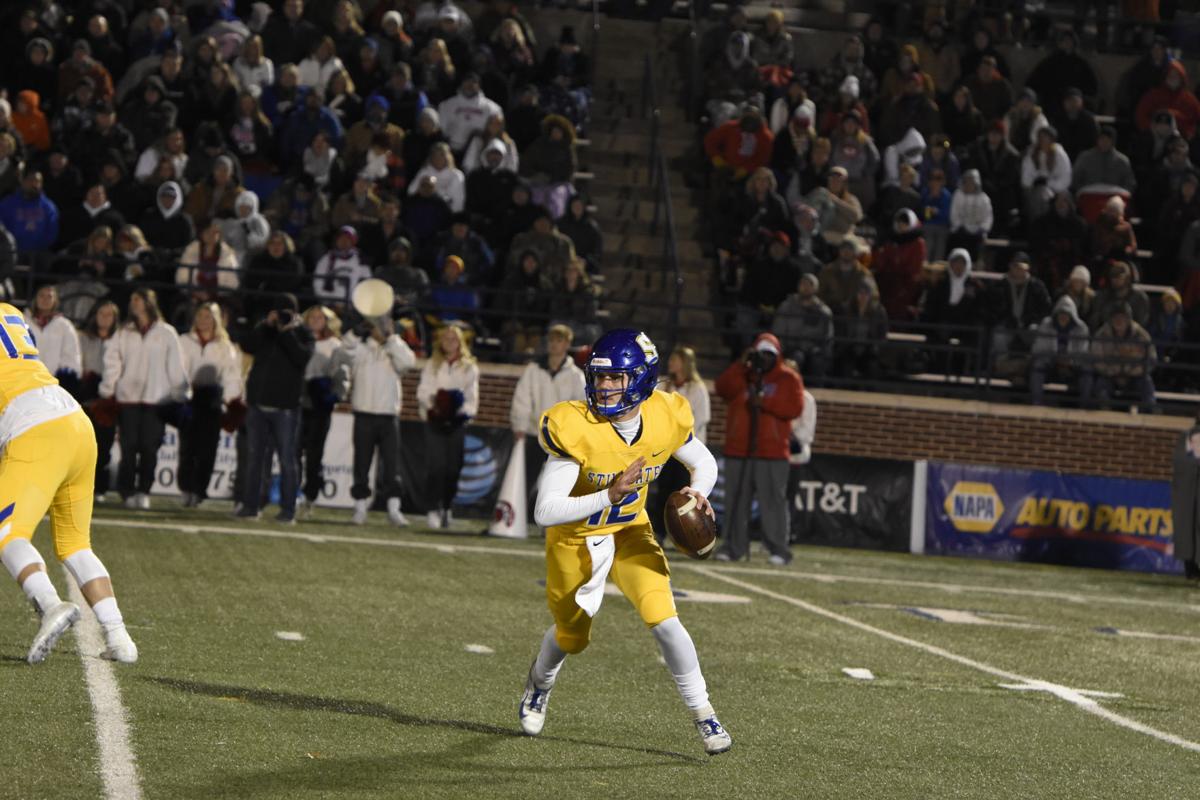 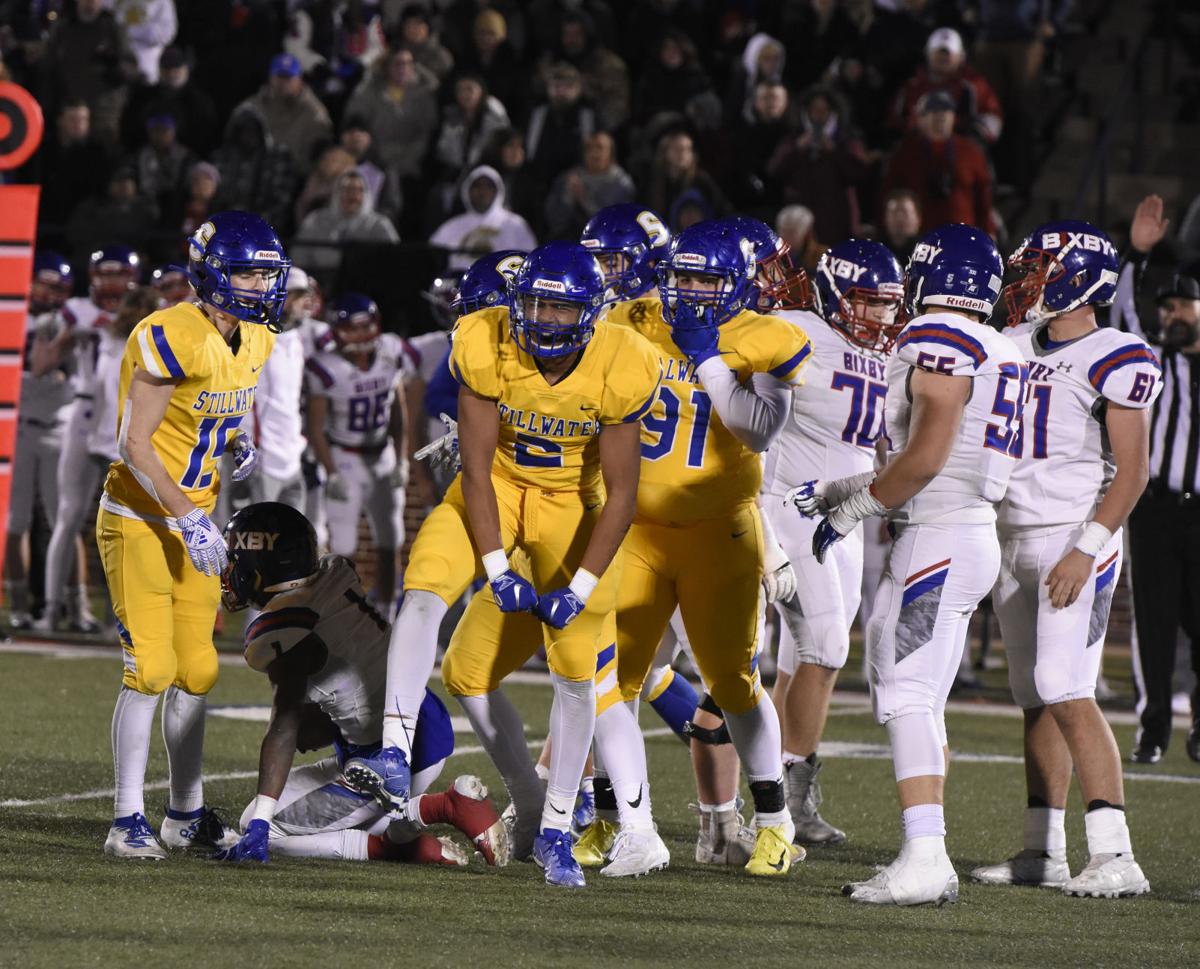 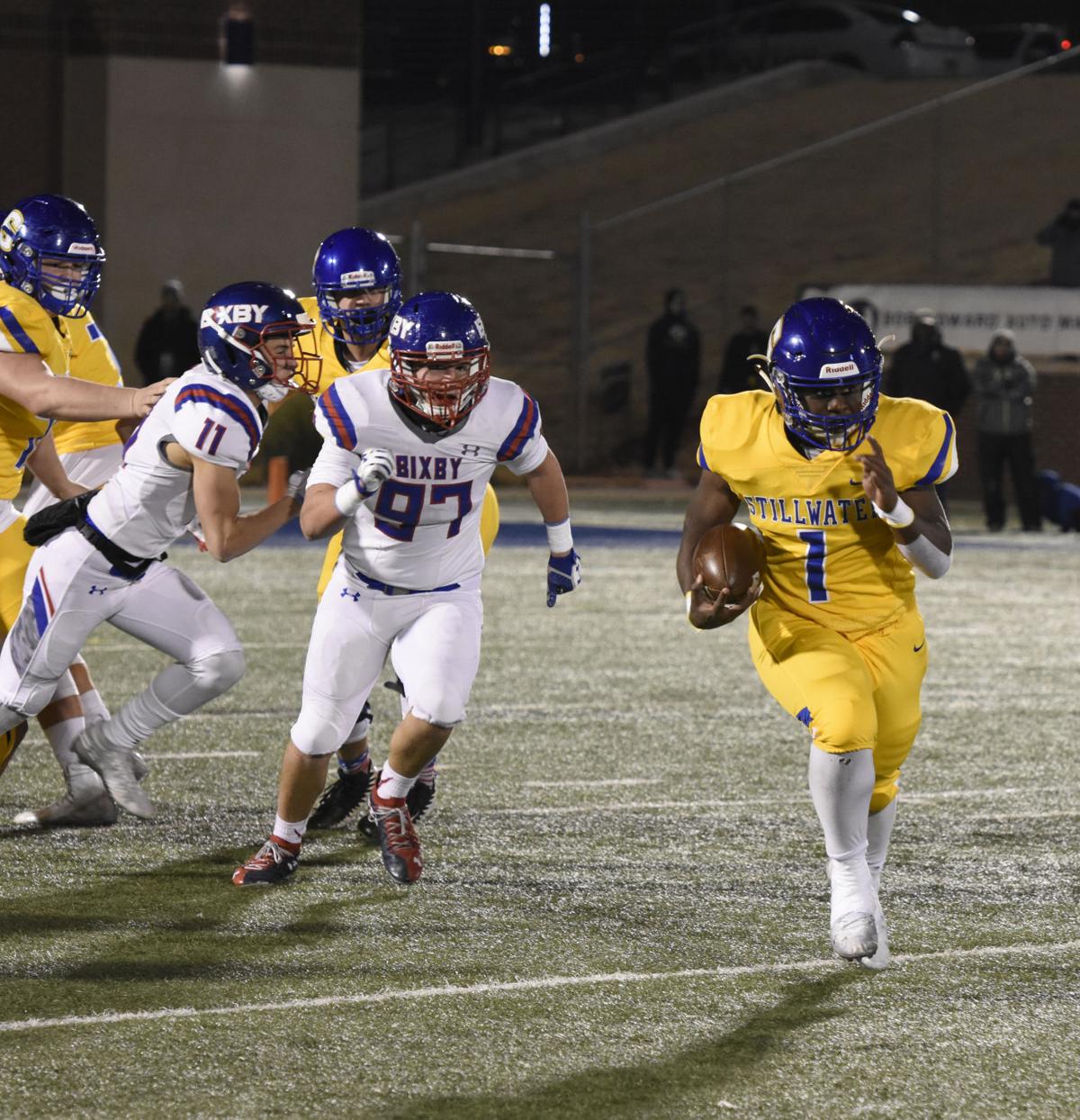 Stillwater High junior running back Qwontrel Walker runs through a hole in the Bixby defense in the state title game on Friday night. The Pioneers lost 40-36.

Stillwater and Bixby captains meet at midfield of Wantland Stadium in Edmond.

Stillwater High senior wide receiver Anthony Bland catches a pass between his legs and retains control of it to the ground for the Pioneers’ first touchdown against Bixby on Friday night in the Class 6A-II State Championship.

Stillwater High junior running back Qwontrel Walker runs through a hole in the Bixby defense in the state title game on Friday night. The Pioneers lost 40-36.

EDMOND – With two of the best offenses in the state battling for the state title, it was Bixby that made the final play Friday night at Wantland Stadium.

Stillwater needed a fourth-down stop deep in its own territory during the final minute to give itself a chance at a game-winning drive.

Bixby senior Brennan Presley ran patiently through the Pioneers’ defense for the game-clinching first down. Following his run, the final seconds ticked down and Stillwater’s chance at history ended with a heart-breaking 40-36 defeat.

“I just told them we loved them and they gave everything they had,” SHS coach Tucker Barnard said of his postgame message to his team. “They put it all on the line. We put it on the line the way we called the game. They gave us their best effort and we’ve got to be able to hold our heads high. There is nothing to regret when you know you went all in. We went all in. I’m proud of them and love them.”

Friday marked the second-straight year Stillwater (12-1) fell to Bixby in the Class 6A-II state title game. It was also the third-consecutive year Stillwater’s season ended with a loss to Bixby.

Unlike last year, Stillwater led late in the game and had a chance at a game-winning drive. Bixby (13-0) scored the go-ahead touchdown with 1 minute and 4 seconds remaining on a 12-yard pass from Mason Williams to sophomore Braylin Presley.

The Spartans needed to convert a fourth-down-and-1 to keep the drive from ending on its side of the field. They went to Brennan Presley in the wildcat formation, which worked well all night for the second-straight year, and he picked up four yards.

Following Bixby’s score, the Pioneers had time for a possible game-winning drive. On second down, SHS quarterback Gunnar Gundy scrambled before he was sacked and fumbled. Bixby recovered it, all but sealing the victory.

Gundy tried to argue with the officials, saying his arm was moving forward as he tried to throw it. The call on the field wasn’t changed.

Gundy finished the night 19 of 27 for 234 yards, three touchdowns and one interception. He ended his career as one of the best quarterbacks in school history, but his final play was a sack fumble.

“That stinks,” Barnard said. “That kid made so many plays for us the last three or four years, it’s been incredible. Wherever he goes next, he’s going to make a bunch of plays for those guys. I hate that for him, but that doesn’t do anything for his legacy or anything else, as far as I’m concerned. He’s a heck of a football player.”

The Pioneers trailed by nine in the fourth quarter when they mounted a comeback, kicking their offense into high gear. Junior tailback Qwontrel Walker, who carried the ball 23 times for 210 yards, ended a 15-play, 96-yard drive with a one-yard touchdown run that Stillwater needed with 8:16 left on the clock.

Unfortunately, Brennan Presley returned the ensuing kickoff 98 yards for a touchdown, flipping the momentum back in Bixby’s favor.

Stillwater would answer, though. On its first play of the drive, Gundy threw a deep ball right into the hands of senior receiver Jack Smithton, who had five catches for 119 yards, for a 65-yard touchdown. It marked the third score in 24 seconds.

“He was inside of me and I just beat him with speed,” Smithton said. “Gunnar put it in a great place. It was awesome, because it kind of put us back in it.”

The Pioneers’ defense forced a Bixby punt on the next drive, but the punt was downed at the 10-yard line. Three plays later, Walker broke a 79-yard touchdown run that left everyone watching in amazement. He broke tackles, nearly fell down and juked Brennan Presley before breaking more tackles and crossing the goal line.

“That was an unbelievable effort. He probably should have been tackled about five times on that play, but he didn’t quit. There was no giving up in him.”

“That was crazy,” Smithton said. “So many tackles broken on that one. It was incredible. He’s been so fun to play with.”

Bixby began making the comeback after a high snap out of the end zone was recorded for a safety. The Spartans scored a pair of touchdowns before halftime, taking a 19-17 lead at the break.

“We talked at half that this was the adversity we’ve been talking about,” Barnard said. “To have a second quarter like we had where it didn’t look like anything was really going our way. We came together and battled through it, and put ourselves with a chance to win.”