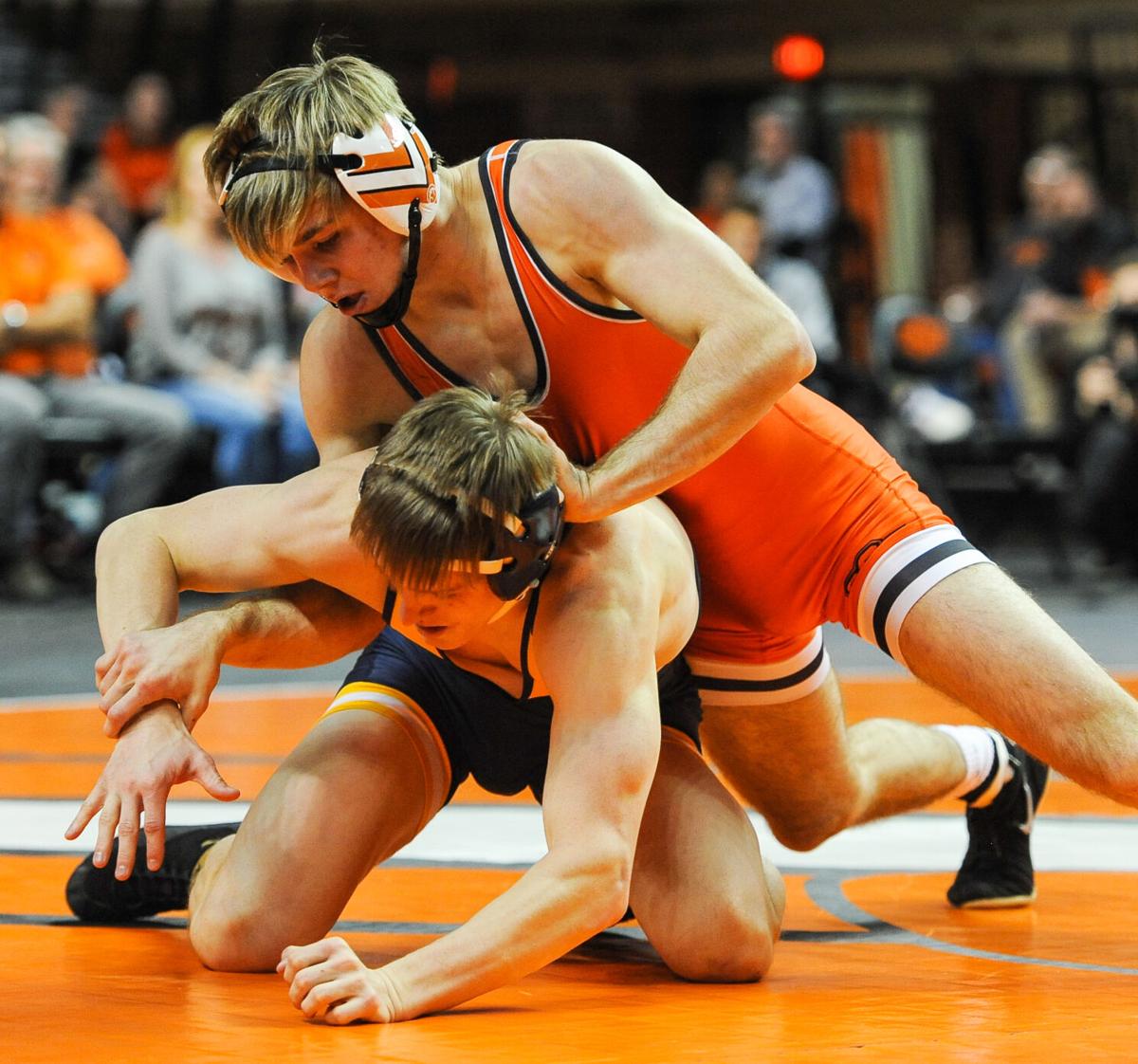 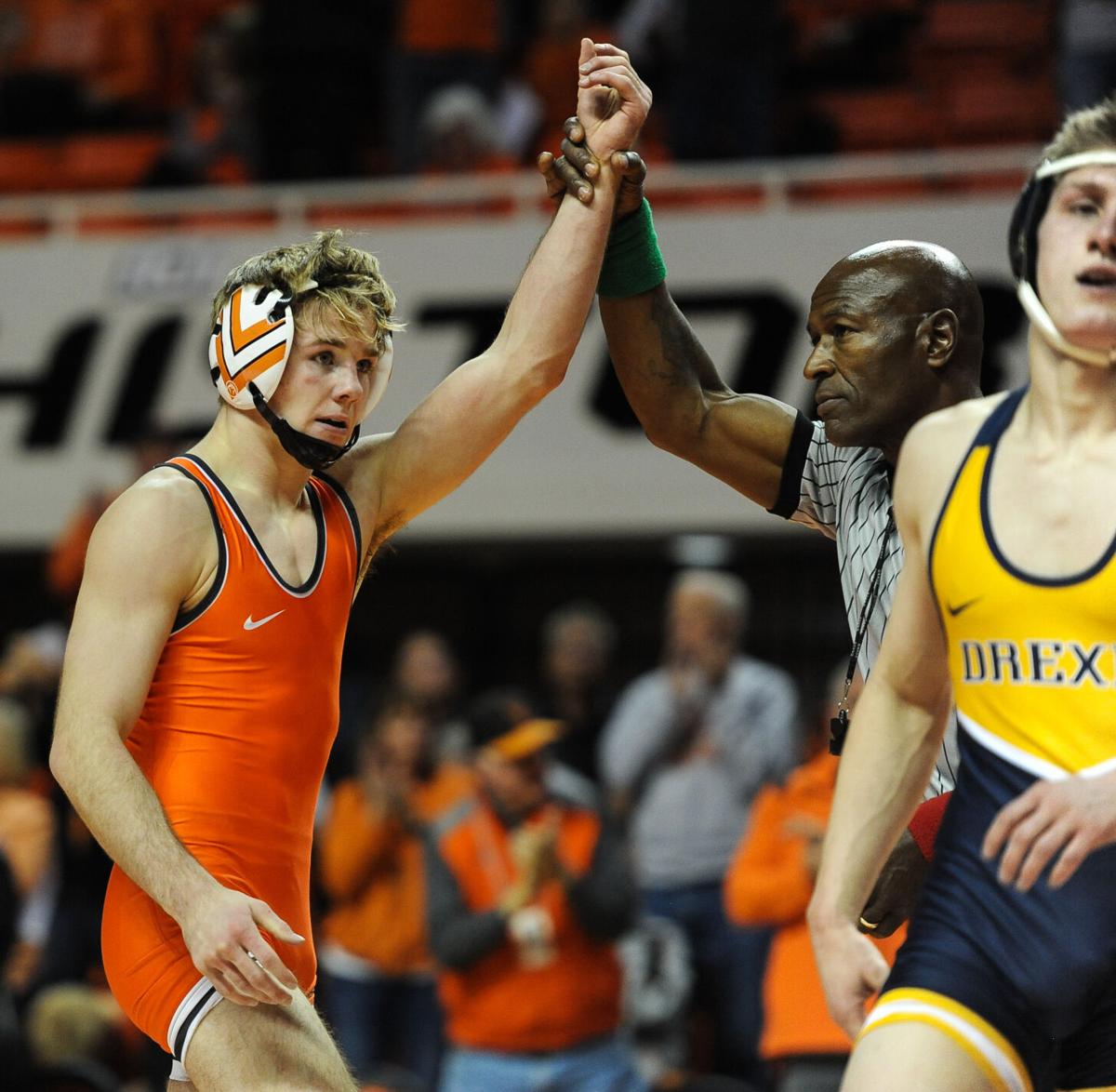 Carter Young wasn’t afraid to admit he was a bit overwhelmed when he fought his way into the starting lineup for Oklahoma State wrestling.

After beating All-American Dusty Hone in a pair of rankings matches preceding the Minnesota dual, the Stillwater High graduate was overcome by the moment in his first dual as a Cowboy.

And the result was a loss in his college debut.

“It was a little different, obviously, because the crowd was pretty big and I wasn’t used to that,” Young said this week while the program is on an abbreviated holiday break. “But I just think I wrestled a bad match there. First-match jitters a little bit, but I’ll be good going forward.”

But as is the case in all sports, it’s how an athlete responds from those moments that can define them.

And so far, that loss in Minnesota is a distant blip in his young college career.

His next match could have just as easily been too much for the wrestler who just 10 months earlier was winning his third high school state championship.

The longtime Sand Springs native – who moved to Stillwater prior to his sophomore year – was making his Gallagher-Iba Arena debut. But instead of succumbing to the historic venue steeped in college wrestling history, he came out as his teammates and coaches had become accustomed to seeing from him in the wrestling room.

He rolled to an 18-6 major decision, picking up a bonus-point victory for his first college win.

“That was awesome. I was excited for that one,” Young said. “It’s a special place in there. There’s no place like Gallagher-Iba, so that was a cool experience, and I’m looking forward to getting some more matches in there in January.”

It was a performance that Cowboy junior Daton Fix claimed following the dual that he “expects to see.”

And Fix has seen a lot of Young over the years.

Longtime friends in Sand Springs, they wrestle at similar weights – Young considers himself light for 141 pounds, but obviously Fix has 133 on lockdown. They even faced off in the Senior World Trials – with Fix getting the better of Young on his way to qualifying for Team USA and earning a silver medal at the World Championships.

That was before Young found his way to even wearing a Cowboy singlet.

Young was originally signed with Northwestern and was even in Illinois preparing for his college career when the academic semester had started at Oklahoma State.

But he returned home just before Northwestern’s fall term began – due to a coaching turmoil when several were fired for unwillingness to abide by a campus mandate that they get vaccinated.

And finding himself back on the same team as Fix, was one of the biggest highlights of making that move back to Stillwater.

“It was good coming back seeing that dude because I’ve been friends with him for a while – our families have always been real close,” Young said. “So it was good getting back down here and hanging out with him. It’s been awesome.”

The pair had been training together over the summer before Young’s departure for what he thought would be his college program – getting workouts in leading into the World Trials.

But now, those sessions are a little more frequent.

Fix, who wants to be a wrestling coach whenever his competing days are done, had constructive criticism to help his young teammate prepare for the grind ahead in the second half of the season – including the true grind of a college wrestling postseason.

While the longtime friend knows how good Young is on his feet, he’s not so sure if the true freshman is fully prepared for what awaits him at the college level with riding opponents.

“He’s gonna struggle with some of these guys with top and bottom since he’s not the biggest 141-pounder and it being his first year of college wrestling,” Fix said. “He has to prepare for those real tough matches and being able to ride. It’s gonna be huge for him coming into the heart of the season.

“I will tell him that because he’s going to be good on his feet, that’s just who he is. He can get takedowns, he can scramble and he’s gonna frustrate a lot of people on speed.”

And Young expressed a humble approach when discussing what Fix had said.

Young believes in his capabilities on his feet, but he mentioned that he could already feel the difference between prep and college competition on the mat from when he first started training.

“I’ve been working a lot on top and bottom since I got here, and I think I’ve made a lot of strides already from since I’ve been here – especially on bottom,” said Young, who is ranked 21st at the weight by InterMat Wrestling. “I was getting ridden pretty bad right when I came here in practice and now I’m getting out, so I think I’ve been getting a lot better on bottom … but I need to focus on top more on getting more turns.”

Part of that growth is coming from his training partners.

Young adheres to the mentality that iron sharpens iron, and competing every day in the wrestling room with NCAA qualifiers and All-Americans has helped him in making the jump in less than a year from finishing his high school career.

That’s even more notable when he trains against Fix, who is a two-time national finalist and has had success on the international level.

The junior 133-pounder commented that when he trains with Young, the rookie has found out it’s not so easy to get in on single-legs against the former Junior World champion.

But Young is taking those lessons with Fix in stride.

“If you can just touch that dude’s legs, you can touch anybody’s legs,” Young said. “It doesn’t get much harder than that. So it’s good having someone like that to wrestle with every now and then, because I’m not gonna face anybody tougher than that.”