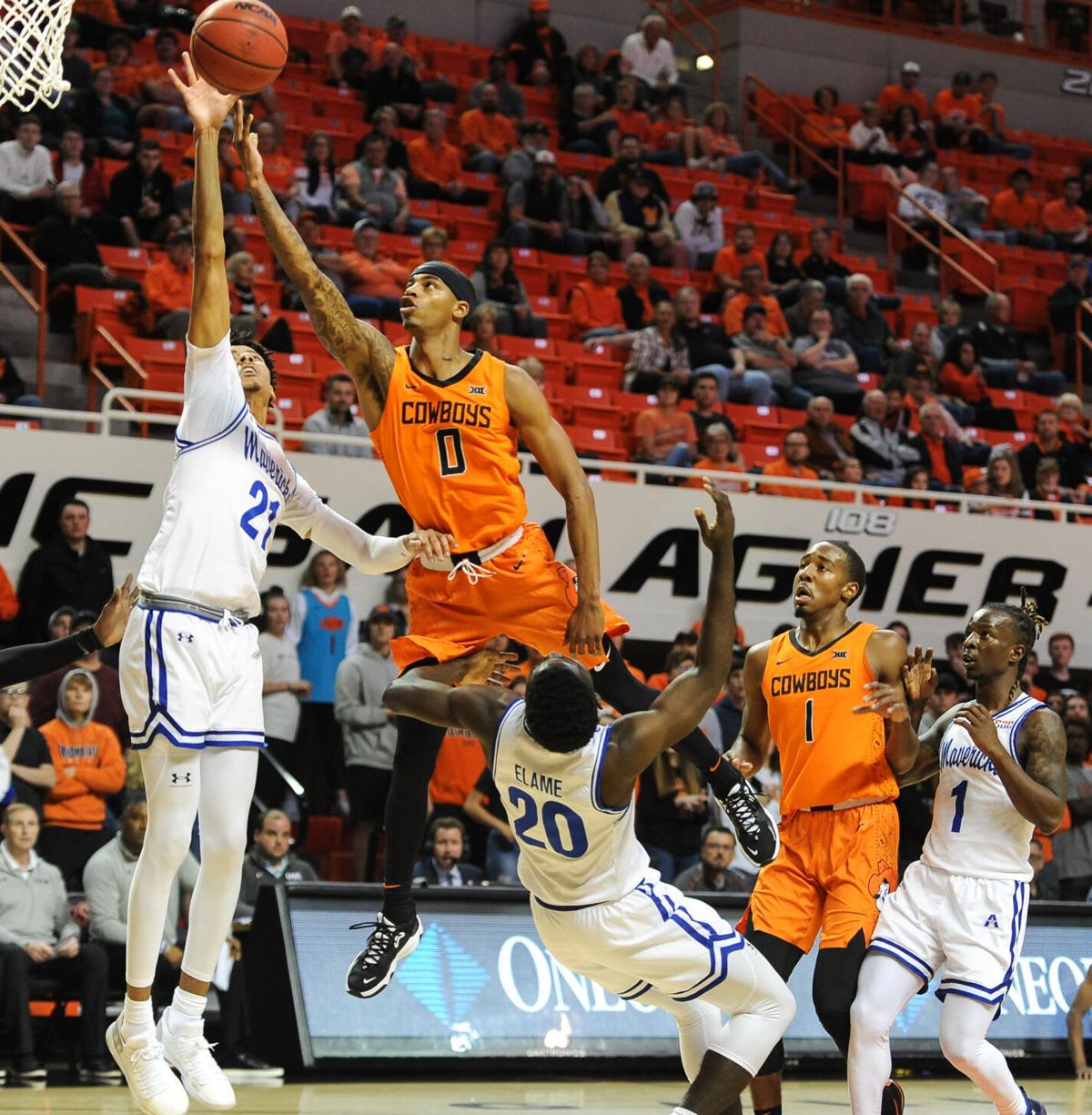 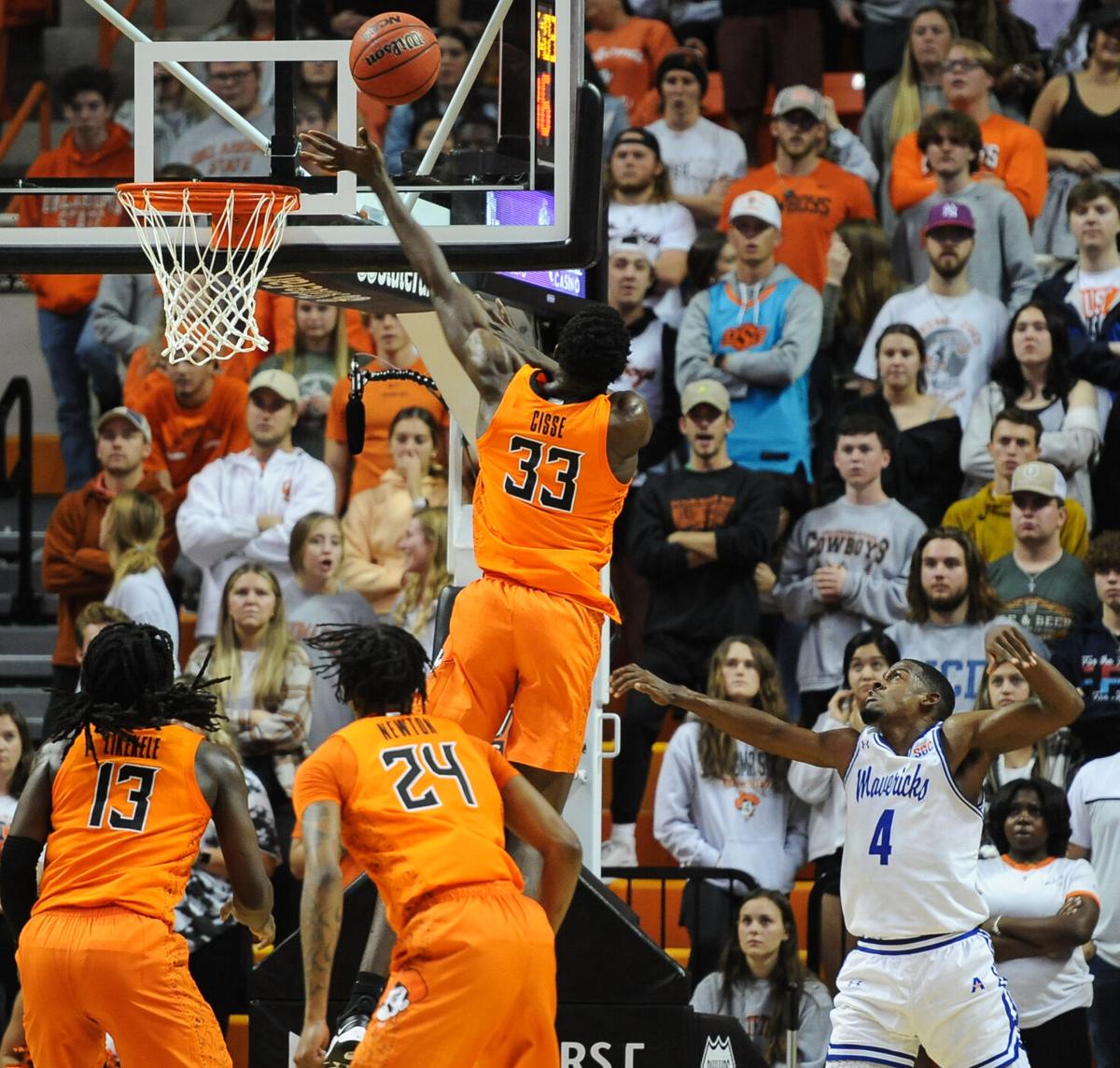 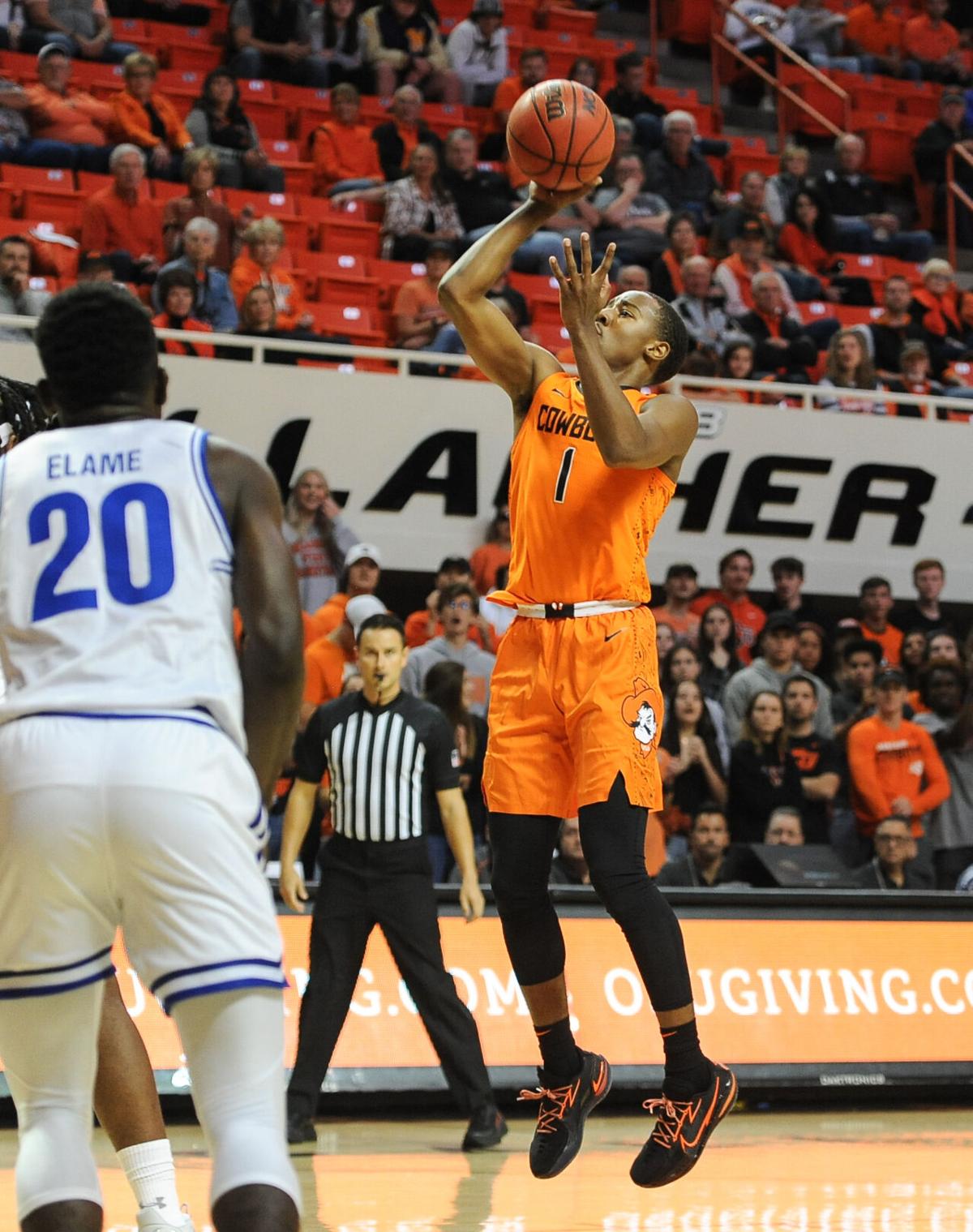 Oklahoma State sophomore guard Bryce Thompson puts up a floater in the lane during Tuesday's season opener against UT-Arlington in Gallagher-Iba Arena. 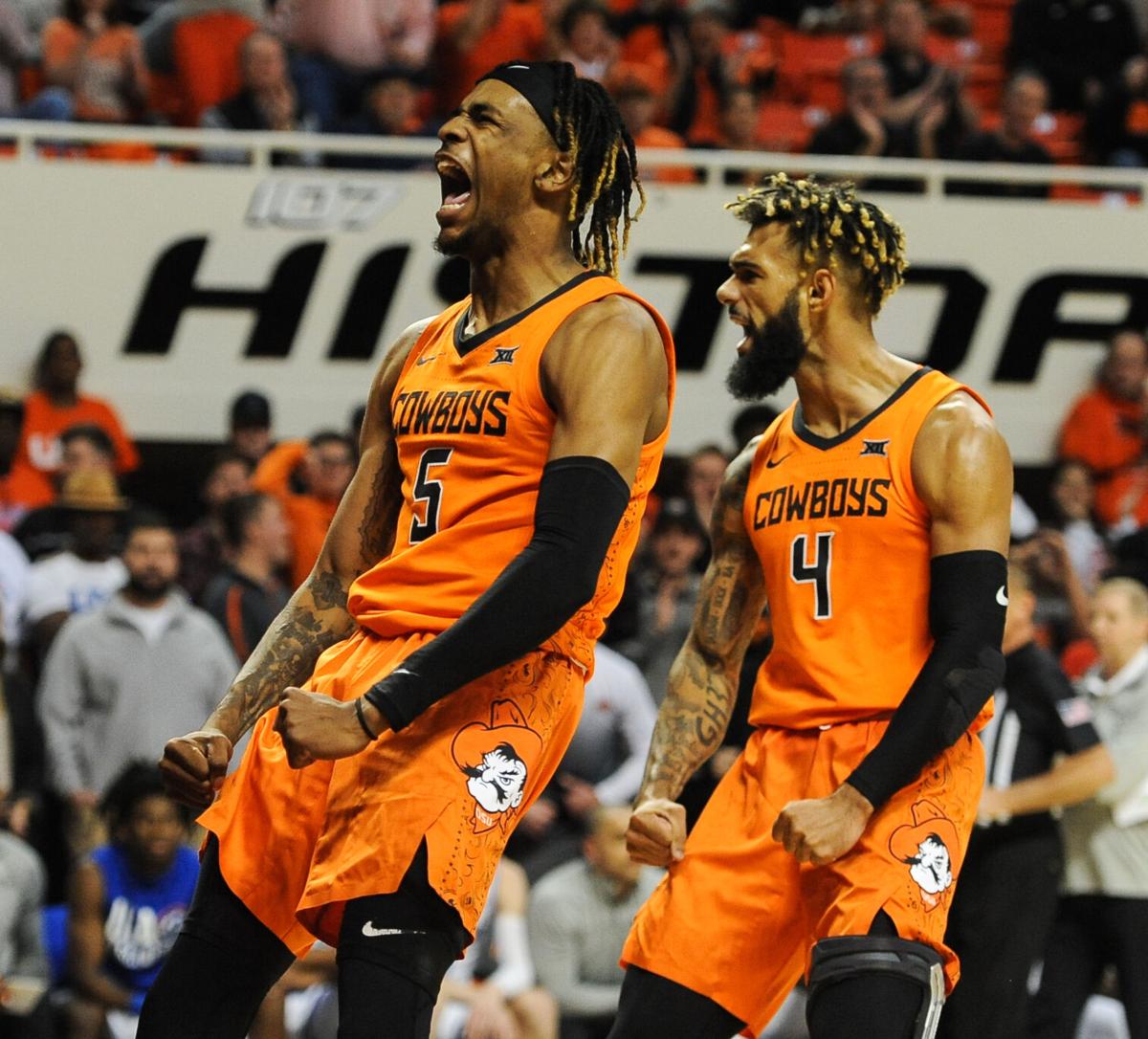 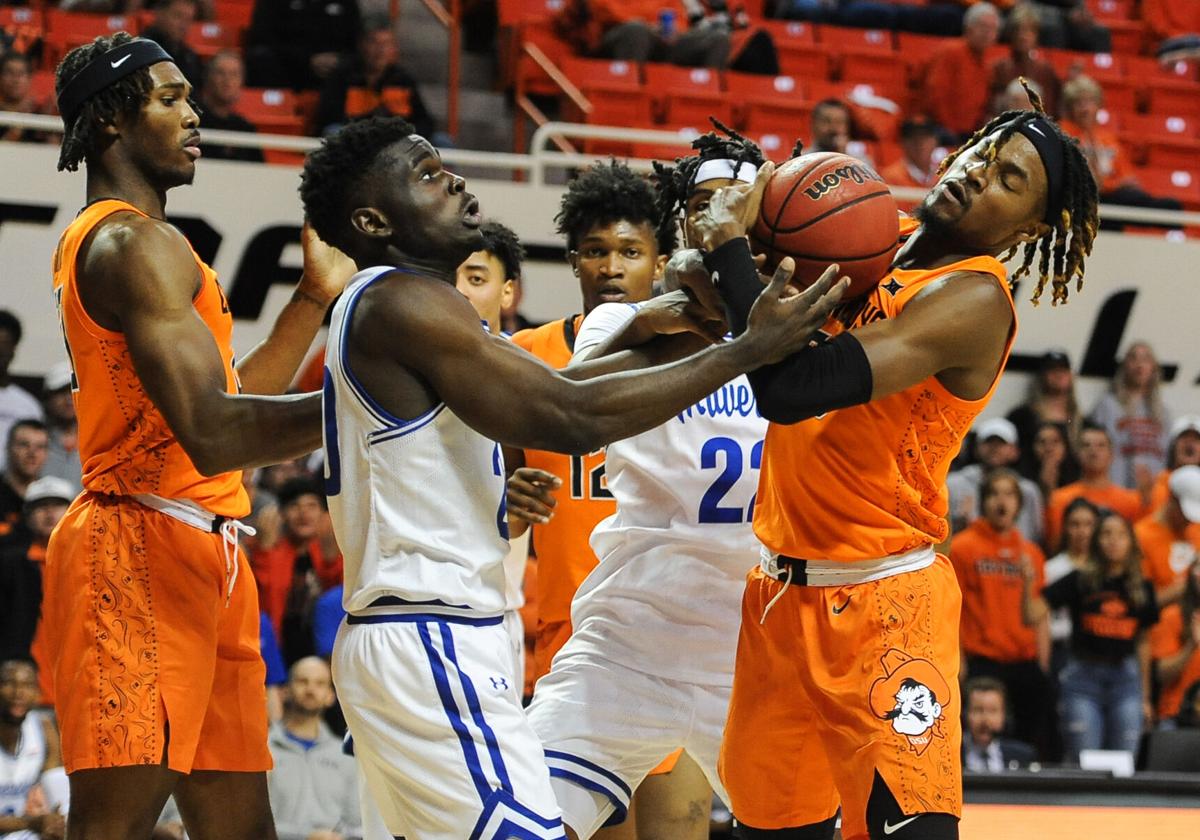 Oklahoma State sophomore guard Bryce Thompson puts up a floater in the lane during Tuesday's season opener against UT-Arlington in Gallagher-Iba Arena.

The Cowboys’ new shirts display the word “UBUNTU,” an African term commonly translated as “I am because you are” or “I am because we are.”

In the aftermath of the NCAA’s decision to uphold OSU’s postseason ban, the program is sticking to this philosophy of unity, reflecting it on the court with a showcase of depth. The Cowboys throttled UT Arlington 88-45 on Tuesday night in Gallagher-Iba Arena, starting the season with an emphatic way to show the basketball world what the NCAA tournament could be missing with OSU’s exclusion.

From the starting lineup to the group of walk-ons, 13 Cowboys checked into the game. Twelve of them scored, and five players reached double digits.

The two leading scorers were newcomers. In his OSU debut, sophomore center Moussa Cisse had a game-high 17 points, including Oklahoma State’s first seven points to start the second half, while highly touted Kansas transfer Bryce Thompson followed with 14.

The Cowboys (1-0) energized Gallagher-Iba Arena from the beginning of the game until the end, when walk-ons Weston Church and Carson Sager had their first chances to enter the lineup. Sager drew a foul to add a pair of free throws, and the crowd roared as Church put the exclamation point on the victory, making a putback shot just before the buzzer.

Because of COVID-19 protocol, the walk-ons were unable to suit up last season, making Sager’s first opportunity to play especially meaningful to him.

“I’m grateful,” Sager said. “It’s obviously fun being on the sidelines every game and cheering them on; that’s also living the dream for me. But getting in and really coming from last year, I’m just grateful for it. It’s awesome.”

Although the Mavericks (0-1) held a 1-0 advantage before tipoff because of a “stat booking issue” related to a mixup with OSU’s starting lineup, that lead didn’t last long. Cisse provided the Cowboys’ first points of the season with a second-chance layup, and from that point, the home team was rolling.

OSU’s cohesiveness quickly became evident. Anderson hit a 3-pointer from the left corner, extending the Cowboys’ lead to 9-3. Then sophomore guard Rondel Walker immediately stole the ball from Patrick Mwamba and raced toward the basket to throw down a one-handed fast-break dunk.

With 14:39 left in the first half, Boone entered the game off the bench and provided a sudden spark, draining two 3-pointers and racking up three offensive rebounds. Boone finished with eight boards, trailing only Cisse, who had nine.

The Cowboys maintained their dominance throughout the second half. In the first minute, Walker set a screen, Cisse skied to the basket and senior guard Isaac Likekele passed the ball to Cisse for an alley-oop dunk. No one could stop Cisse as he found multiple ways to boost the Cowboys, piecing together a sequence of a layup, a free throw and a jumper after the dunk.

“What was working for me was the patience, because I know my teammates, they got me,” Cisse said. “They always got me. It wasn’t about who was gonna make the most points. It was about winning.”

OSU continues its nonconference schedule with a home matchup against Oakland at 7 p.m. Friday night. After displaying resilience in their season debut when they could have shown discouragement because of the NCAA’s decision, the Cowboys are striving to carry that same attitude through the rest of the year.

“Obviously, I have a lot of respect for (UT Arlington) coach (Greg) Young,” Boynton said. “I think eventually, he’ll get that program going and have a really successful run there. … But it’s truly about us and trying to make the most of whatever this team is gonna be able to do. And tonight was just the beginning of it.”