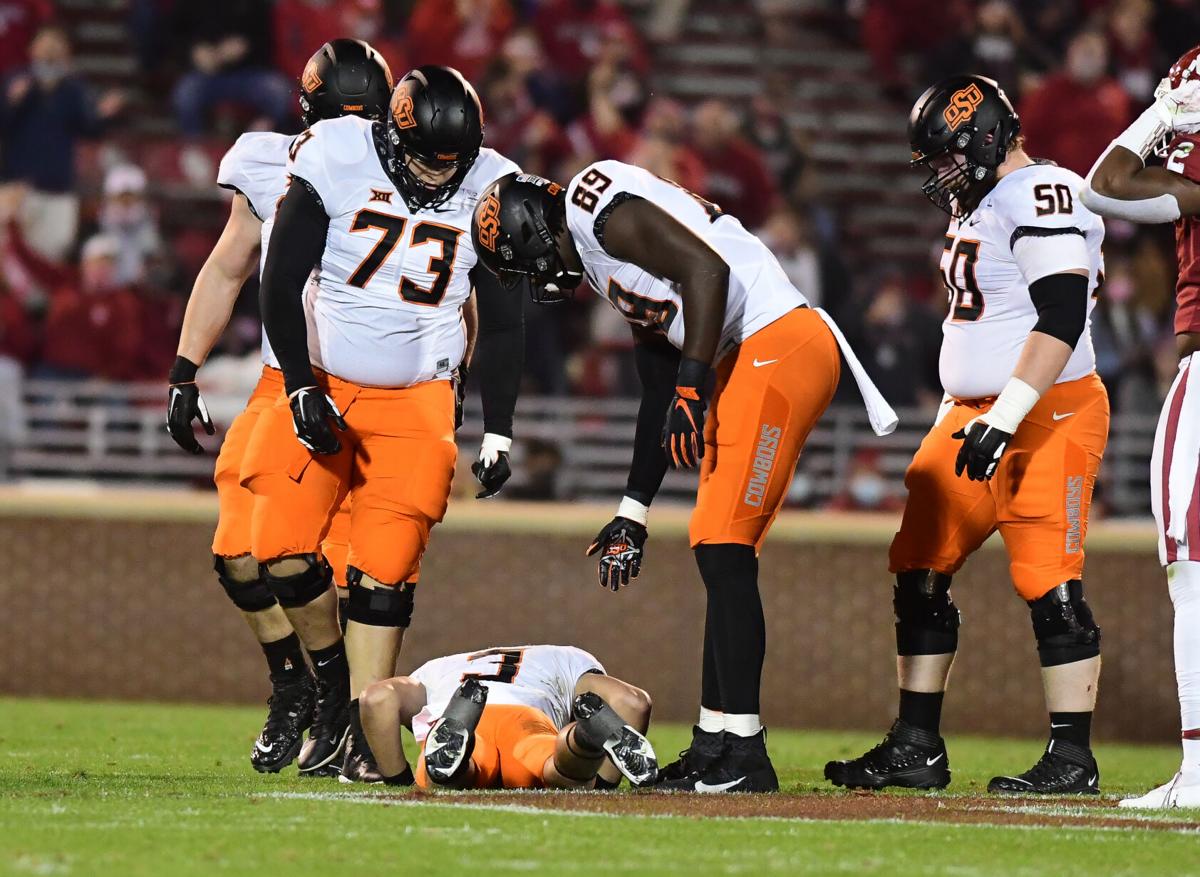 OSU players check on quarterback Spencer Sanders after he takes a big hit during the Bedlam, Saturday, Nov. 21, 2020, at Oklahoma Memorial Stadium. (Kyle Phillips / The Transcript) 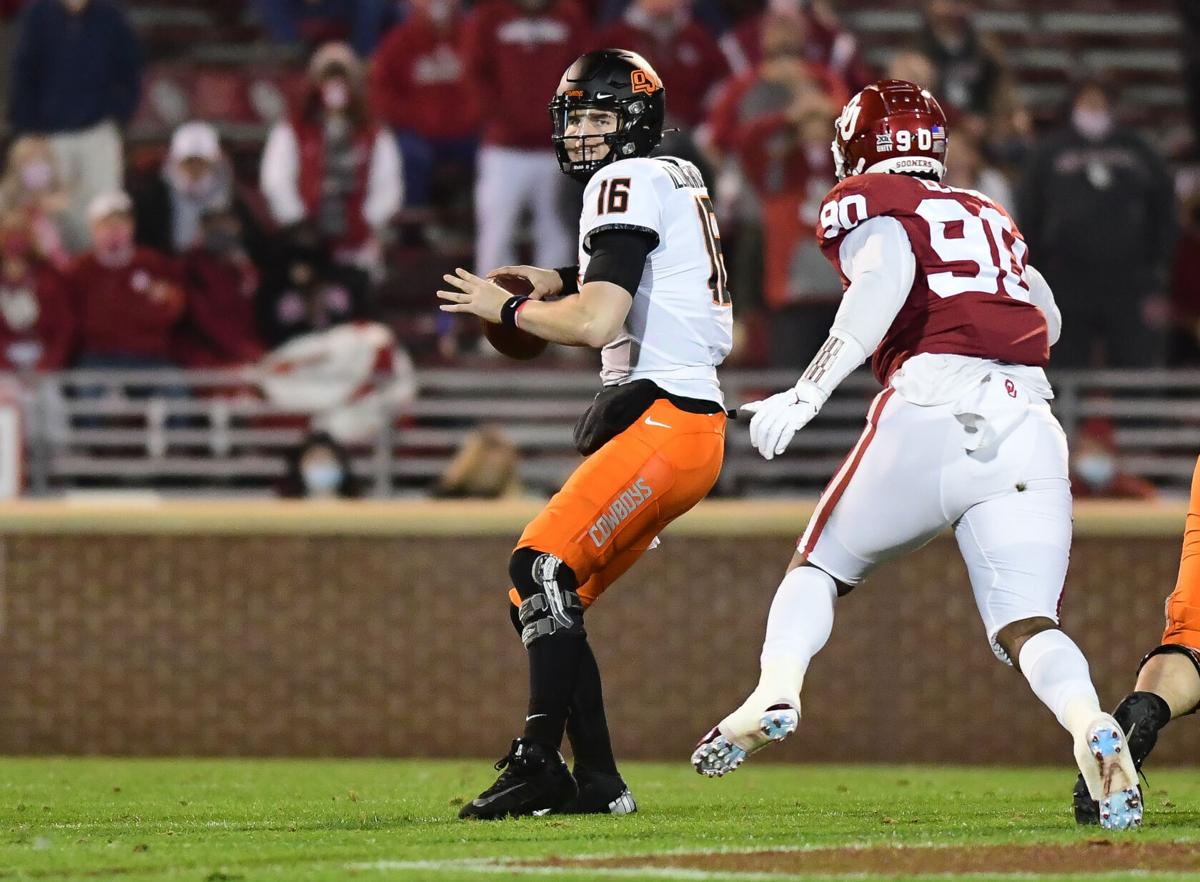 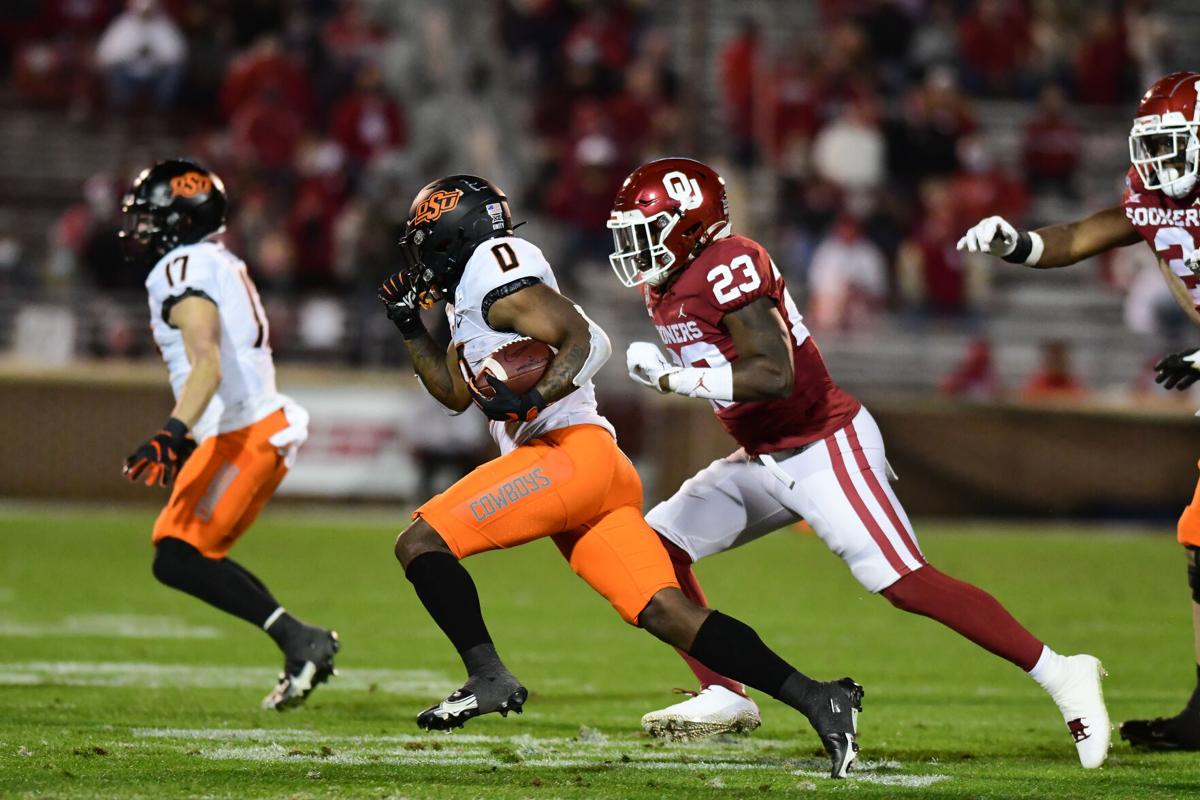 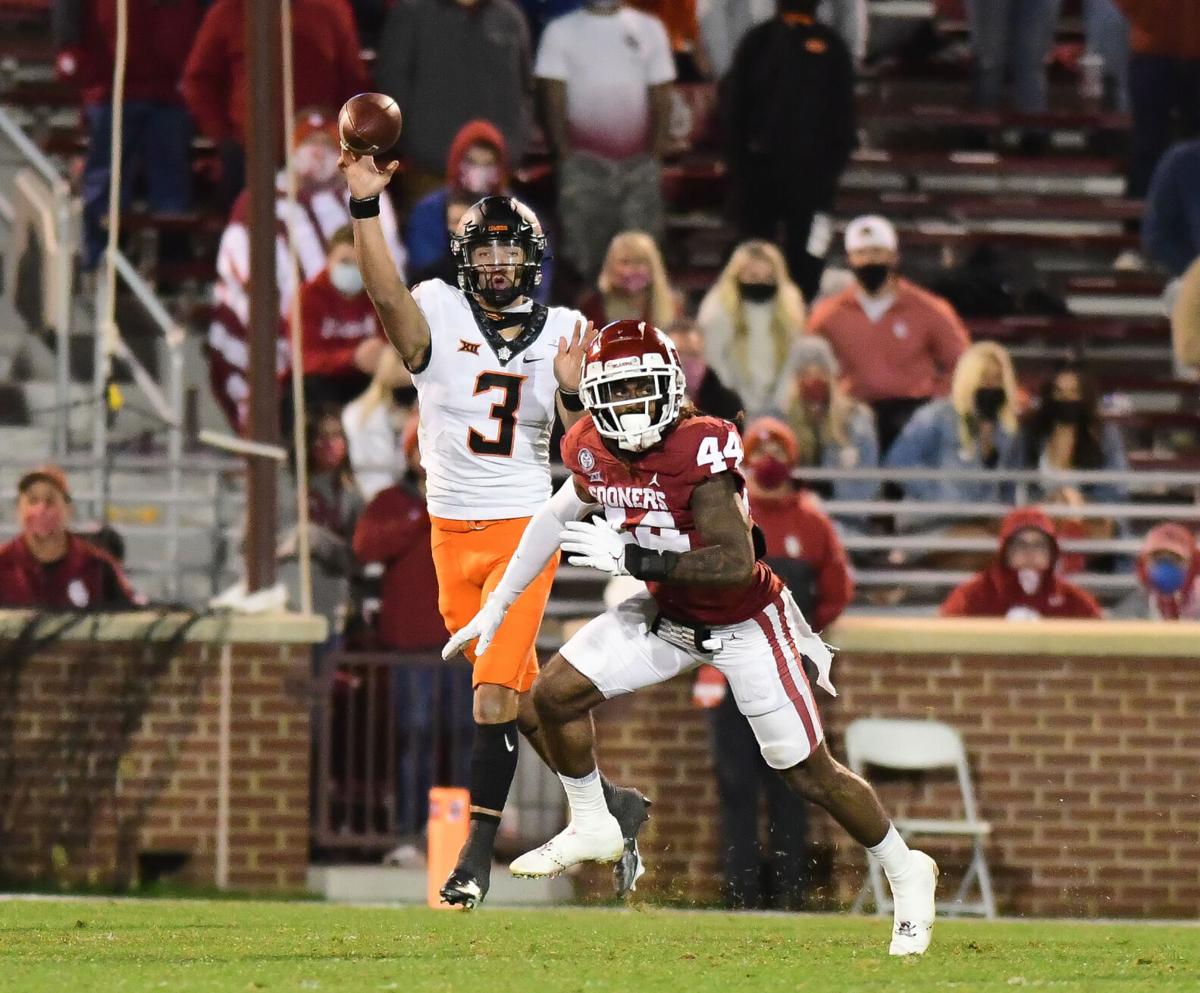 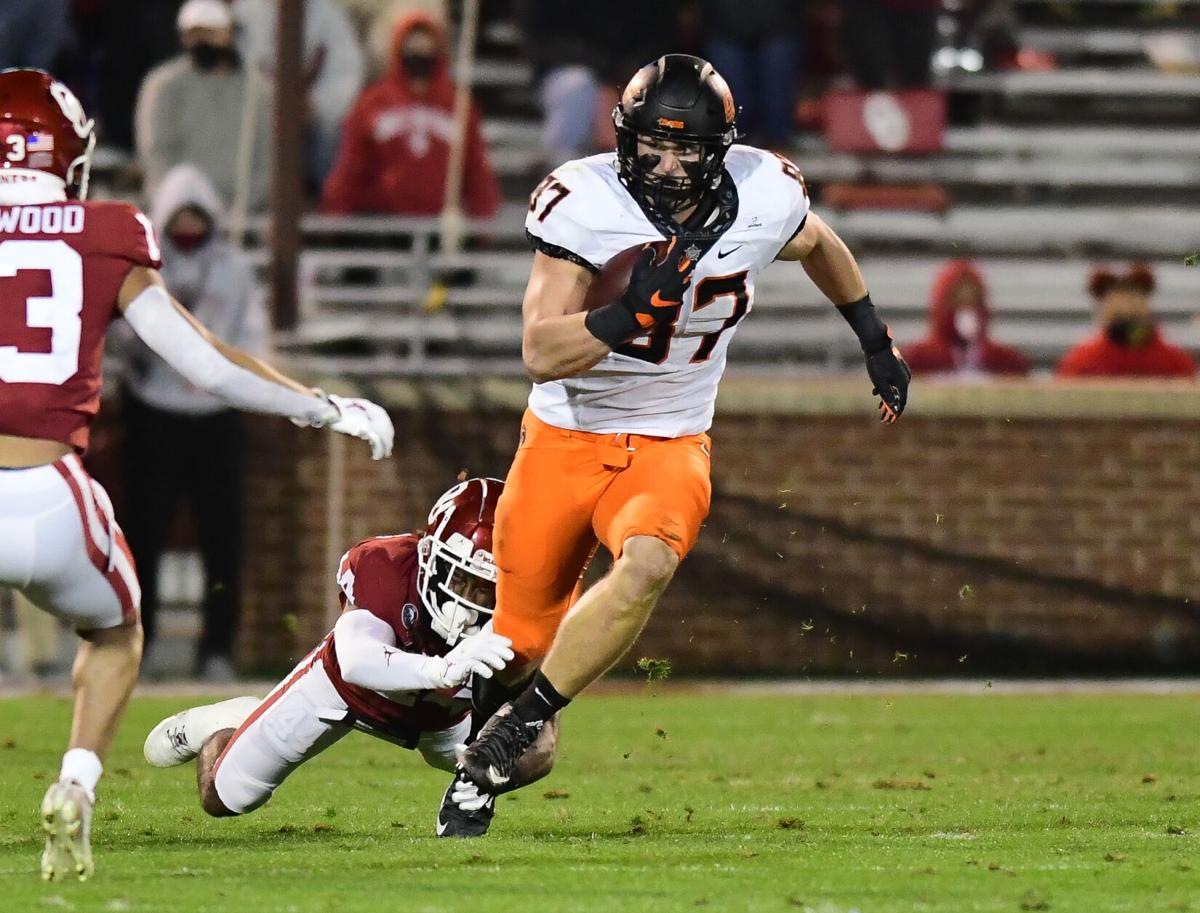 OSU players check on quarterback Spencer Sanders after he takes a big hit during the Bedlam, Saturday, Nov. 21, 2020, at Oklahoma Memorial Stadium. (Kyle Phillips / The Transcript)

Oklahoma State hasn’t fared well in Bedlam games throughout history, and Saturday night’s game got off to a nightmare start for the higher-ranked Cowboys.

OSU fell behind by three touchdowns before it gained a first down. The Sooners’ offense carved through the vaunted OSU defense, and took advantage of a short field gained by an interception.

Before the Cowboys could take a breath, their rivals were rolling to another Bedlam victory. The Sooners beat the Cowboys, 41-13, winning their sixth-straight contest in the rivalry.

“I wish we could have had the first quarter back,” OSU coach Mike Gundy said. “We put ourselves in a hole and never could really come back. We’re not as explosive in certain areas as we have been in past years, so it was a little bit tougher.

"But I will say, the players really competed and fought hard, even though we had a tough start to the game. … We lost to a better team today. They out-coached us and they out-played us. You have to give them credit.”

The Sooners (6-2) scored touchdowns on their first three drives, followed by field goals on the next two series. Their offense stalled out for most of the next two quarters as the OSU defense recovered from its slow start.

However, the OSU offense had only one successful drive for a touchdown. The Cowboys’ rushing attack couldn’t get going and neither OSU quarterback – redshirt sophomore Spencer Sanders or freshman Shane Illingworth – moved the ball much most of the night.

Sanders started the game but left in the first quarter – after bouncing his head off the field on a sack – before returning in the fourth quarter. He finished the game 10 of 19 for 97 yards.

“(Sanders) started feeling better,” Gundy said. “He got dinged in the head. The medical staff usually makes those decisions when those guys can come back and when they’re ready. In the second half, they said they felt like he was OK and clear enough to go back in if we wanted him to.”

Illingworth replaced Sanders after the vicious sack during the only touchdown drive. The OSU freshman was 3 of 6 for 39 yards on the drive that ended with a 15-yard pass to Cowboy Back Logan Carter.

Illingworth ended the game completing 5 of 21 passes for 71 yards.

“I thought he did some good things,” OSU offensive coordinator Kasey Dunn said. “He was up and down a little bit – made some throws and missed some throws. I thought he ran the offense efficiently enough for us to do some things.”

The Sooners scored three touchdowns in less than nine minutes to start the game. They ran a combined 17 plays for 169 yards on those drives.

The third OU drive was a short one after a Sanders pass was intercepted. His pass was deflected at the line of scrimmage before a diving catch gave the Sooners possession. Four plays later, the Sooners took a 21-0 lead before the Cowboys had even picked up a first down.

“I thought we got on our heels early,” OSU defensive coordinator Jim Knowles said. “When you fall into a hole like that, you take a couple punches like that, you get knocked back on your heels. It took us a bit to recover.”

OSU (5-2) went into halftime down 27-13, and had a chance to cut the lead in half with the opening drive of the second half. However, OSU ran three plays for minus-4 yards.

The Cowboys didn’t move the ball more than 34 yards in any of the third-quarter drives. Sanders’ return in the fourth quarter sparked the offense a bit, but his second drive of the quarter ended inside the OU 5-yard line without any points on the scoreboard.

OSU will be back at home next week when Texas Tech comes to town for the final home game of the season.