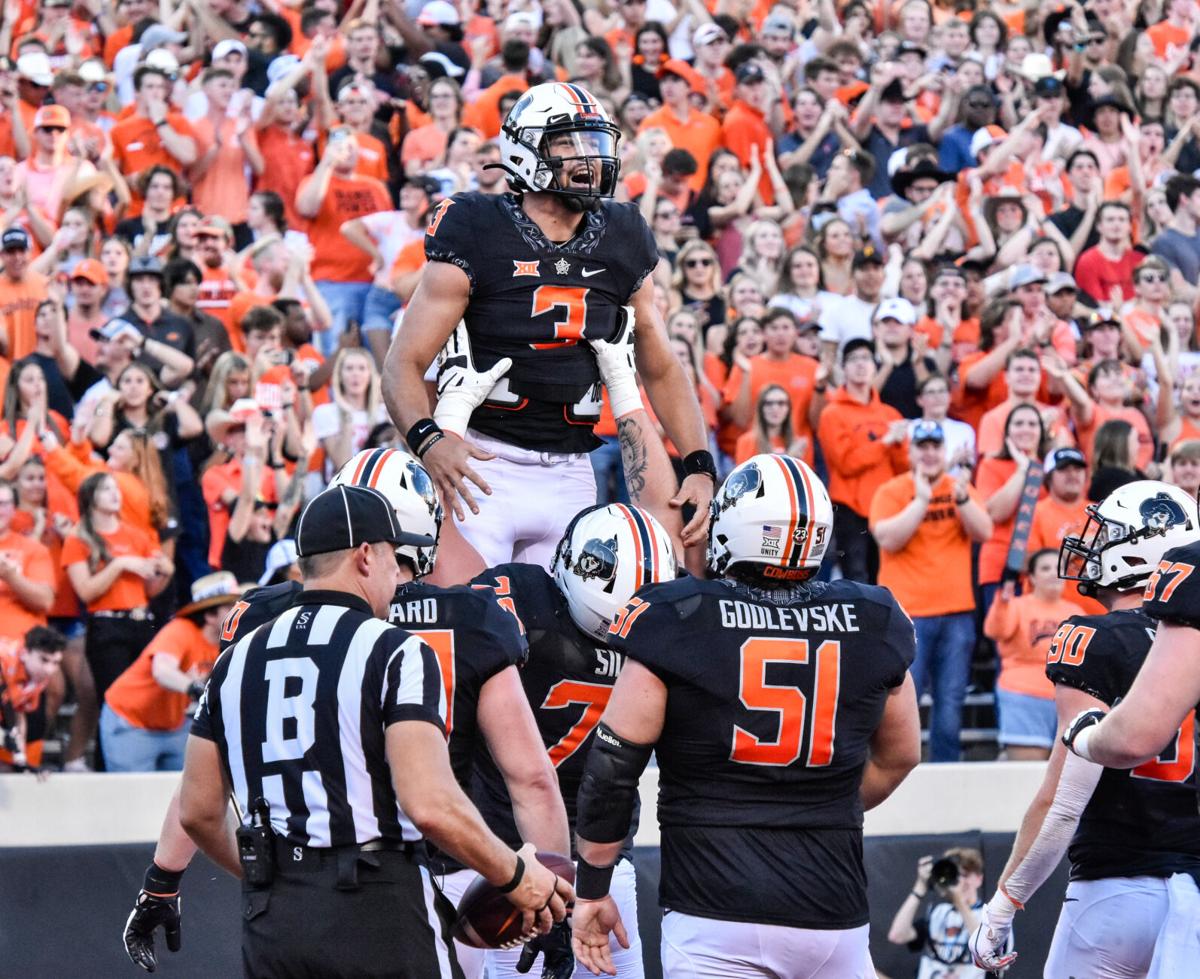 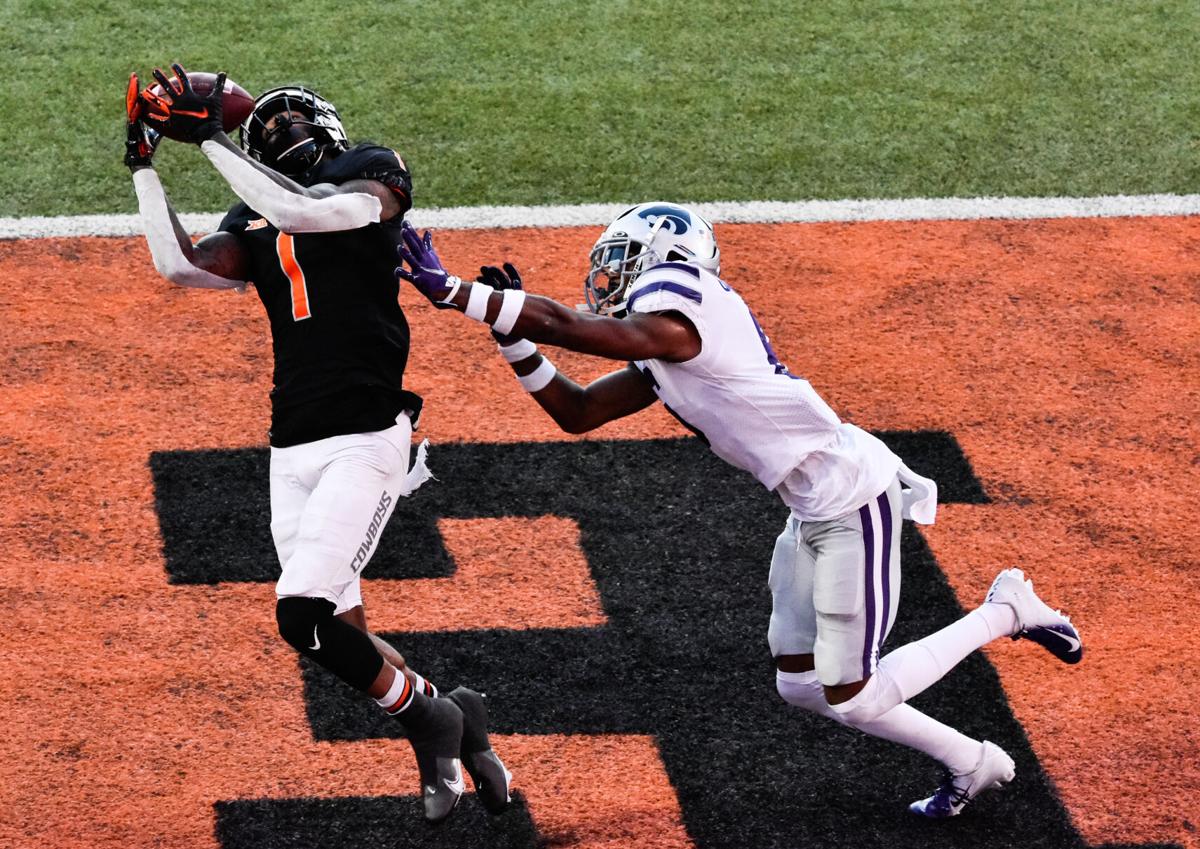 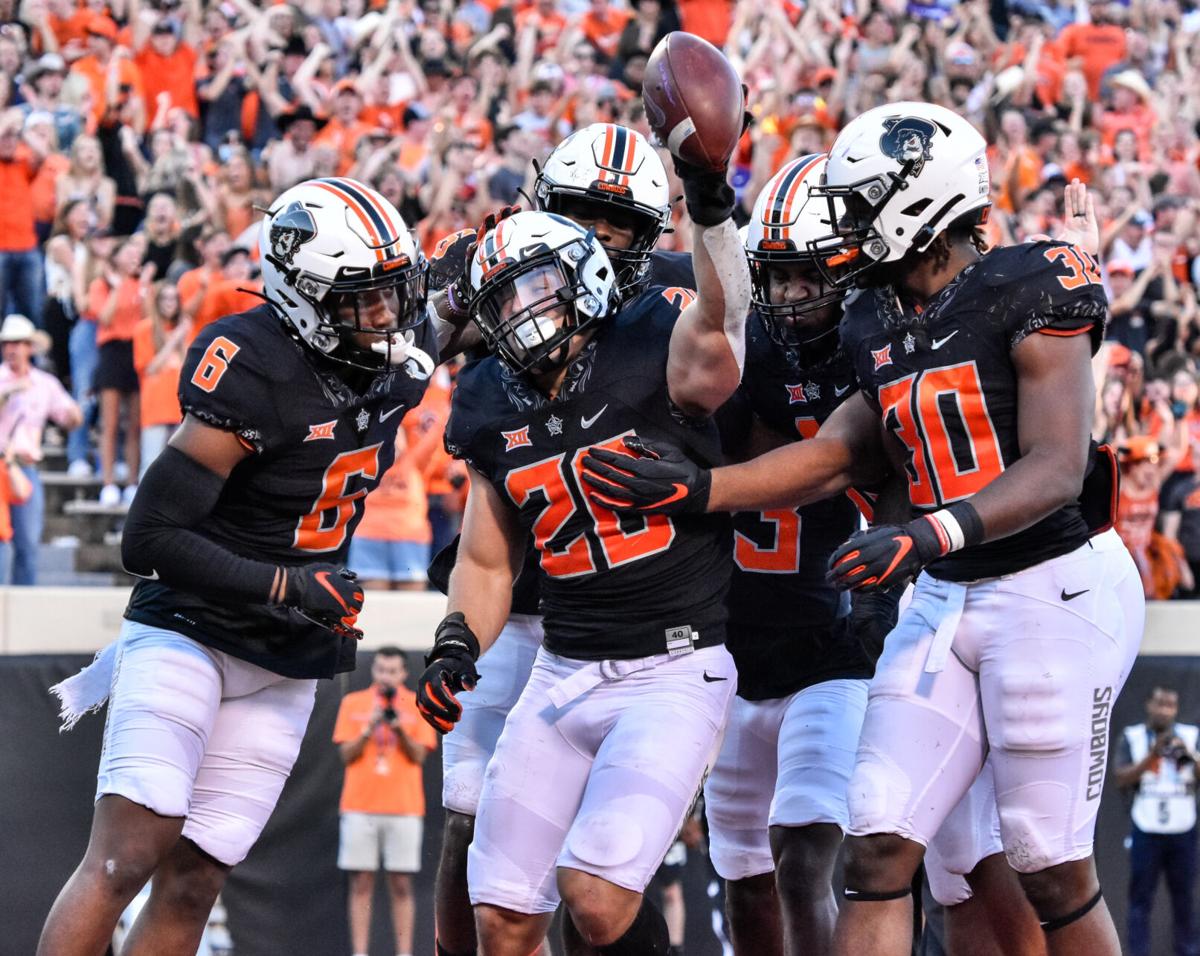 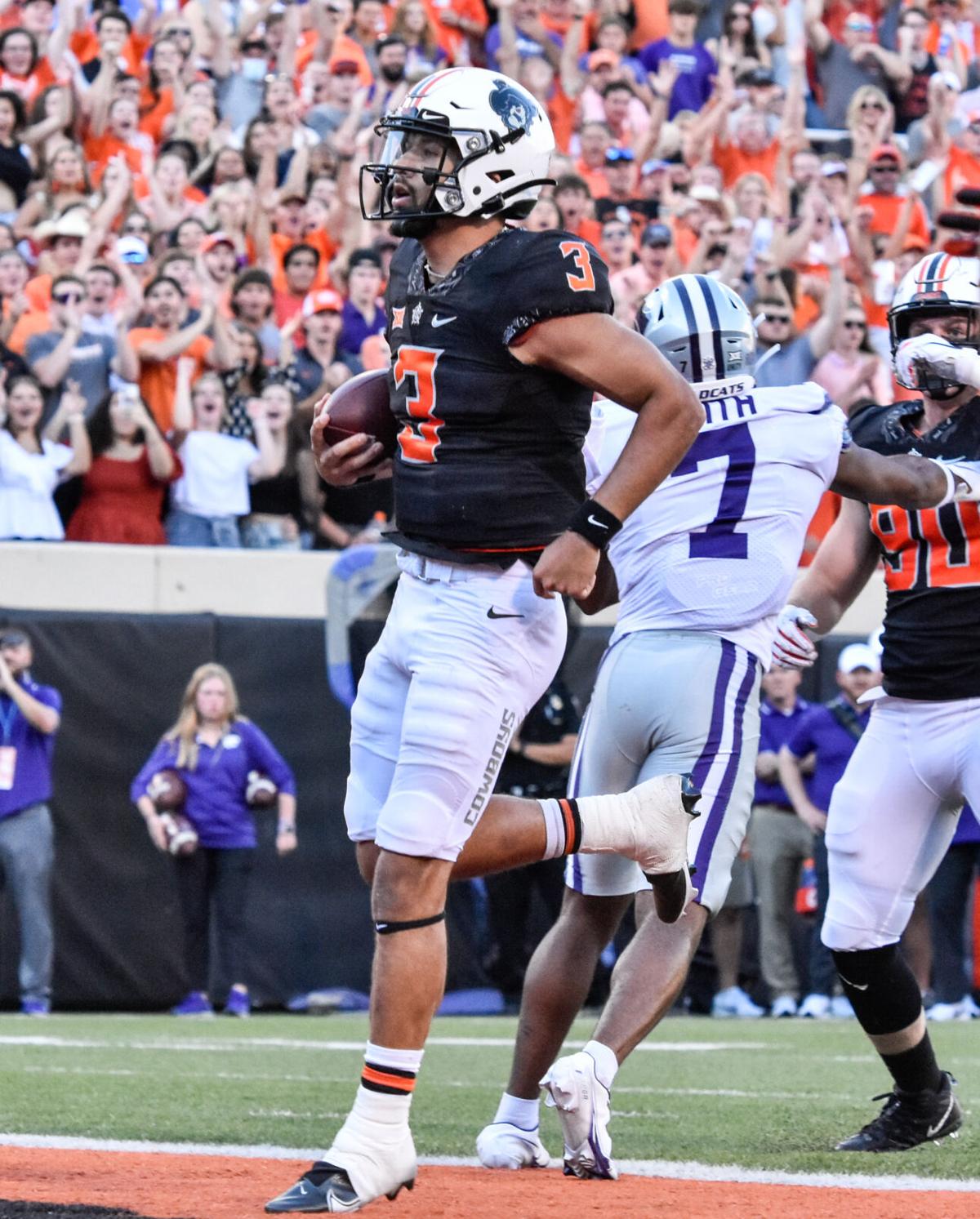 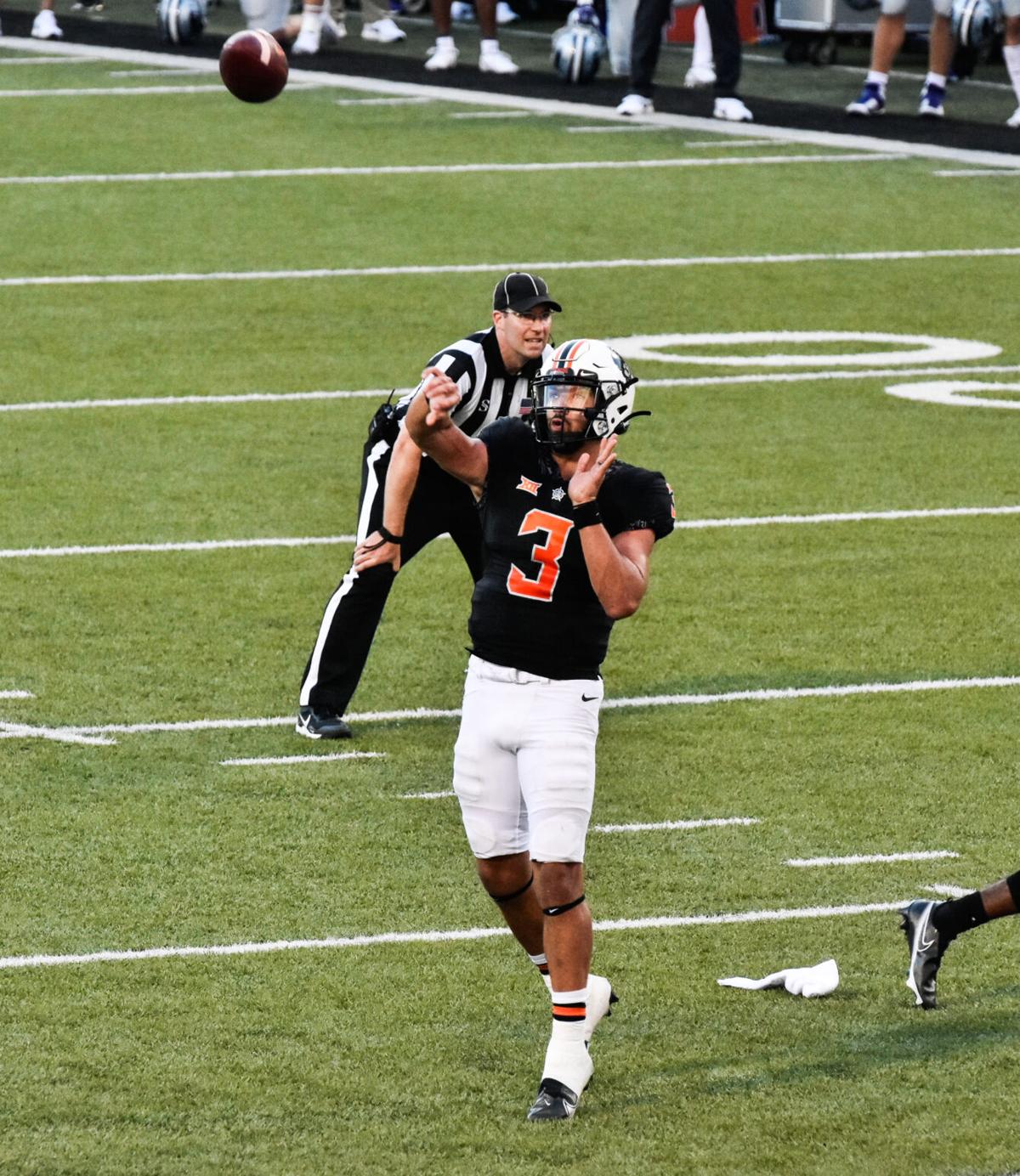 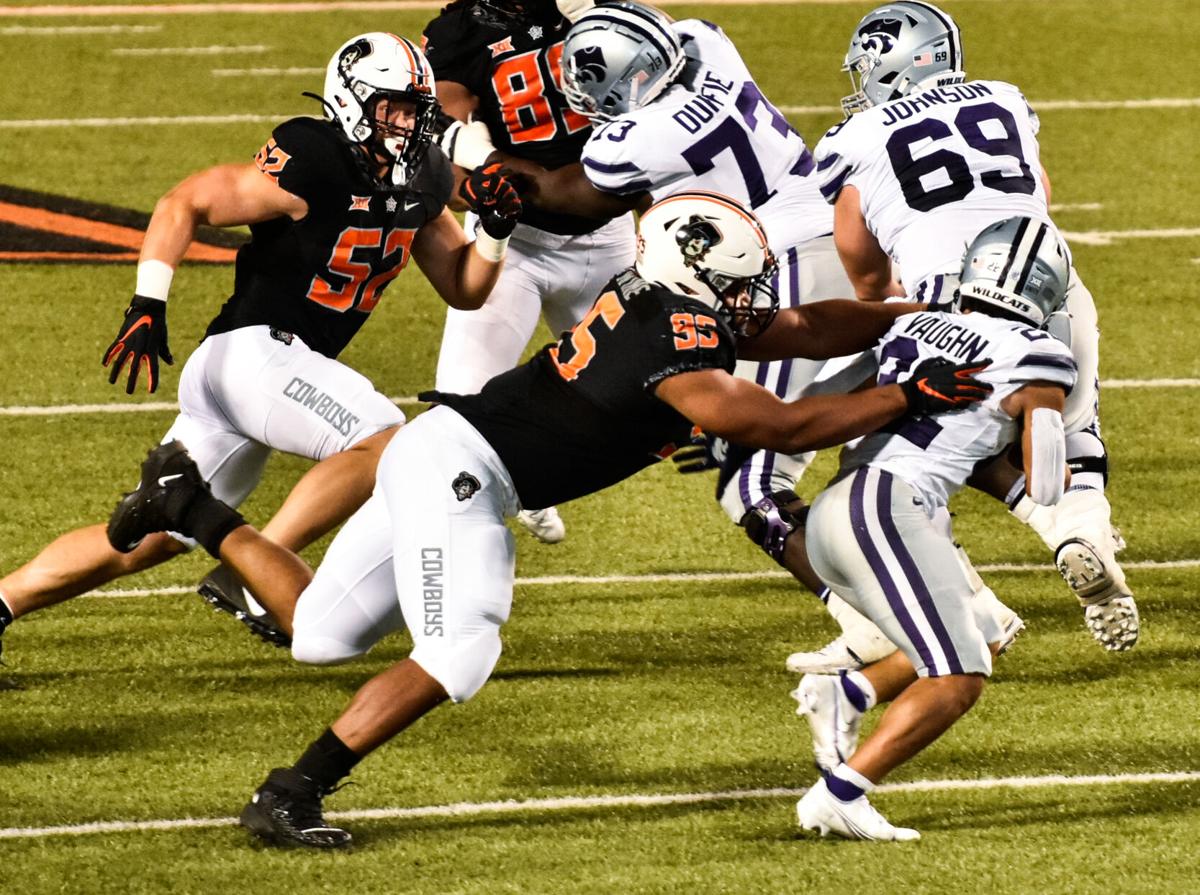 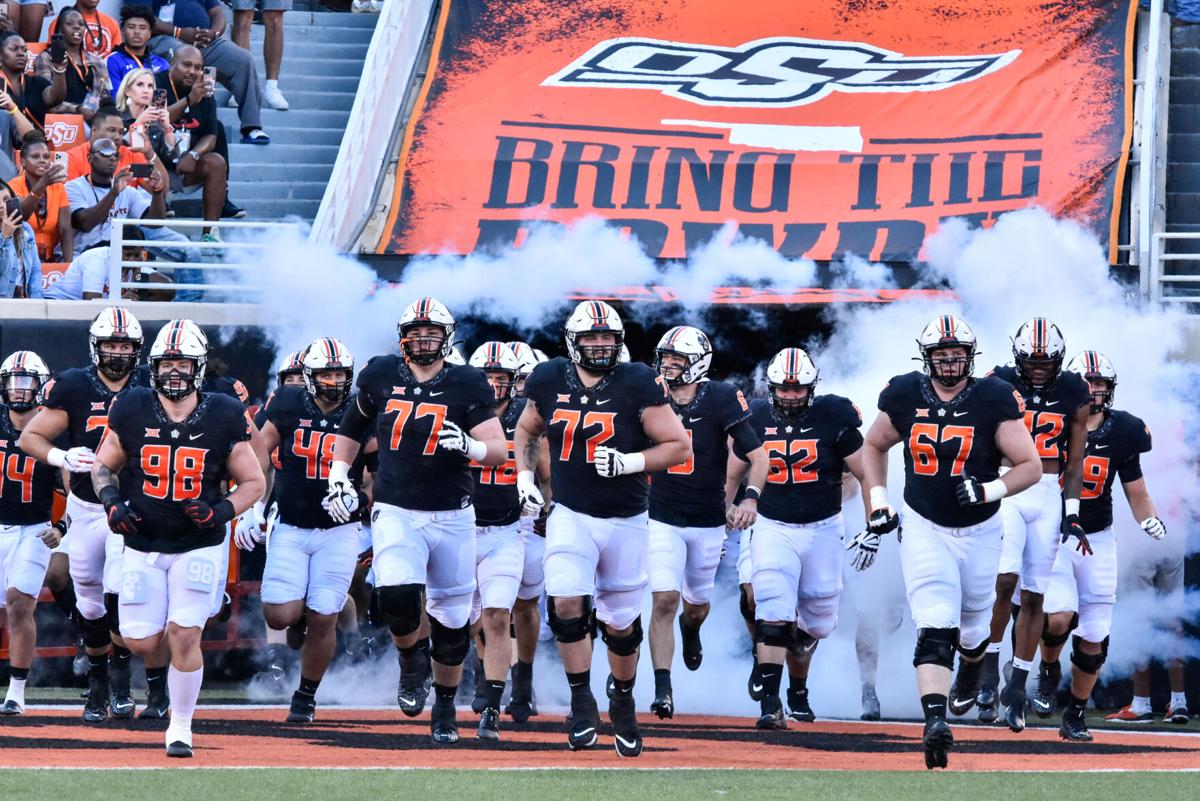 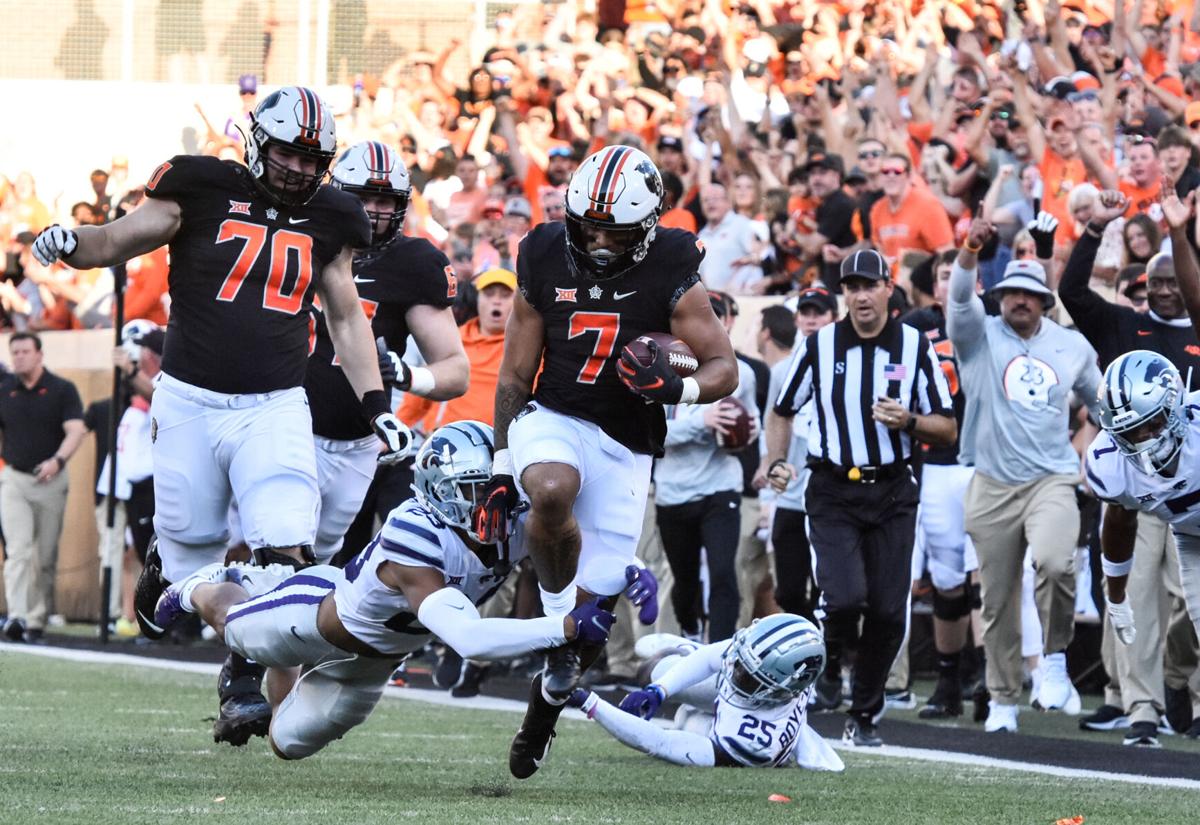 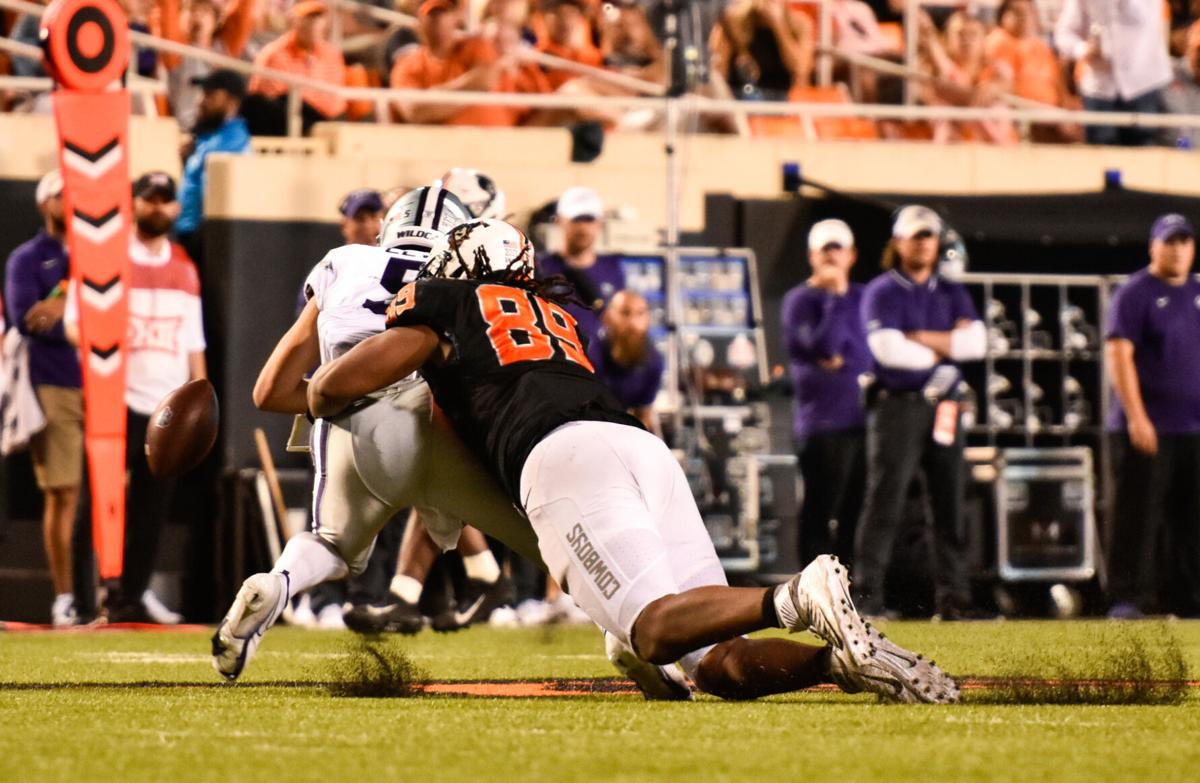 With an array of options on offense, the Oklahoma State football team was cruising toward the end zone early in the second quarter against Kansas State.

Quarterback Spencer Sanders kept the ball and powered ahead to bring up a first down in the Wildcats’ territory. On the next snap, he launched a pass to running back Jaylen Warren, who grabbed it and swiftly spun around defenders as if he was on an amusement park ride, carefully maintaining his balance for another first down. Three plays later, Sanders connected with receiver Tay Martin – who elevated the Cowboys during his return from injury – to cap the long-distance drive in the end zone.

That was the last time OSU crossed the goal line for a touchdown Saturday at Boone Pickens Stadium. Although the offense stalled after halftime, the first half gave the Cowboys enough steam to defeat K-State, 31-20, in their Big 12 opener.

Before halftime, Cowboy football coach Mike Gundy saw how high his team’s ceiling can be with a replenished roster and offensive versatility. The Cowboys (4-0 overall, 1-0 Big 12) fit the mold of an electric, high-scoring OSU offense, reminding him of the way many of his recent teams had played.

In the second half, the fast-paced offense found itself stuck in a lower gear – Gundy said it “turned into molasses.” He said the slowdown wasn’t intentional, and Dunn pointed to penalties as the likely culprit.

When the Cowboys started to get into a groove, blunders sent them backward. During OSU’s first drive of the third quarter, Sanders delivered a 24-yard first-down pass to freshman Blaine Green, another receiver who increased the Cowboys’ depth after missing three games with injury. One play later, an unsportsmanlike penalty on offensive lineman Cole Birmingham forced the Cowboys to backtrack 15 yards. Two offensive drives later, the first play resulted in a holding call on Jake Springfield, pushing OSU back to its 4-yardline after Warren picked up three yards.

Although the Cowboys could never add a cushion to their first-half lead, the defense kept it from unraveling. OSU gave up one second-half touchdown when Jaren Lewis made an under-pressure toss to Deuce Vaughn, who spurted into the end zone on the 55-yard play with 1:08 left in the third quarter, but OSU refused to let the Wildcats creep any closer to their 31-20 advantage.

The Cowboys forced a trio of three-and-outs in the fourth quarter. On the Wildcats’ final drive, Lewis faked a pass before defensive end Tyler Lacy swooped in and sacked him for a loss of 12 yards, bringing up third and 22.

OSU allowed K-State to convert on only two of its 12 third downs.

“It was just all-around a strong performance,” defensive coordinator Jim Knowles said. “And (I’m) really proud of our leadership.”

With the defense holding on through the end, the Cowboys’ first-half efficiency was enough of a spark to carry them. K-State had jumped to an early lead with a field goal, but Sanders answered when he punched into the end zone on a 2-yard keeper, giving the Cowboys a 7-3 advantage with 6:32 left in the first quarter.

Sanders went 22 for 34 with 344 yards and two passing touchdowns, and the defense also joined in on the first-half scoring frenzy.

In the end zone, Malcolm Rodriguez scooped up K-State quarterback Will Howard’s fumble, triumphantly raising the football in his left hand as fellow linebacker Devin Harper slapped Rodriguez’s helmet in celebration. The touchdown extended OSU’s lead to 21-10 with 3:15 left in the first quarter, and the Cowboys rolled into the second with Sanders’ 7-yard touchdown pass to Martin.

K-State’s punt had pinned OSU at its 10-yardline, but the Cowboys kept pushing. The second quarter started with Sanders’ 23-yard pass to Green before he turned to Martin and Warren, who both played key factors in the victory.

Warren recorded 123 yards on 27 carries, sliding, rolling and maneuvering in every way possible to fight for first downs. Martin led the receiving corps with 100 yards on nine catches.

With Warren’s mobility, Martin’s dexterity, Sanders’ leadership and young receivers’ contributions, the Cowboy offense experienced a stretch of synchronizing its pieces and building momentum. As Big 12 play continues against Baylor, the next challenge is to extend that dynamic style of play from two quarters to four.

“The first half was Cowboy football,” Dunn said. “That’s what we wanted to do. We definitely want to do more. … We’ve got to talk to our guys about just controlling things in the second half with penalties.”