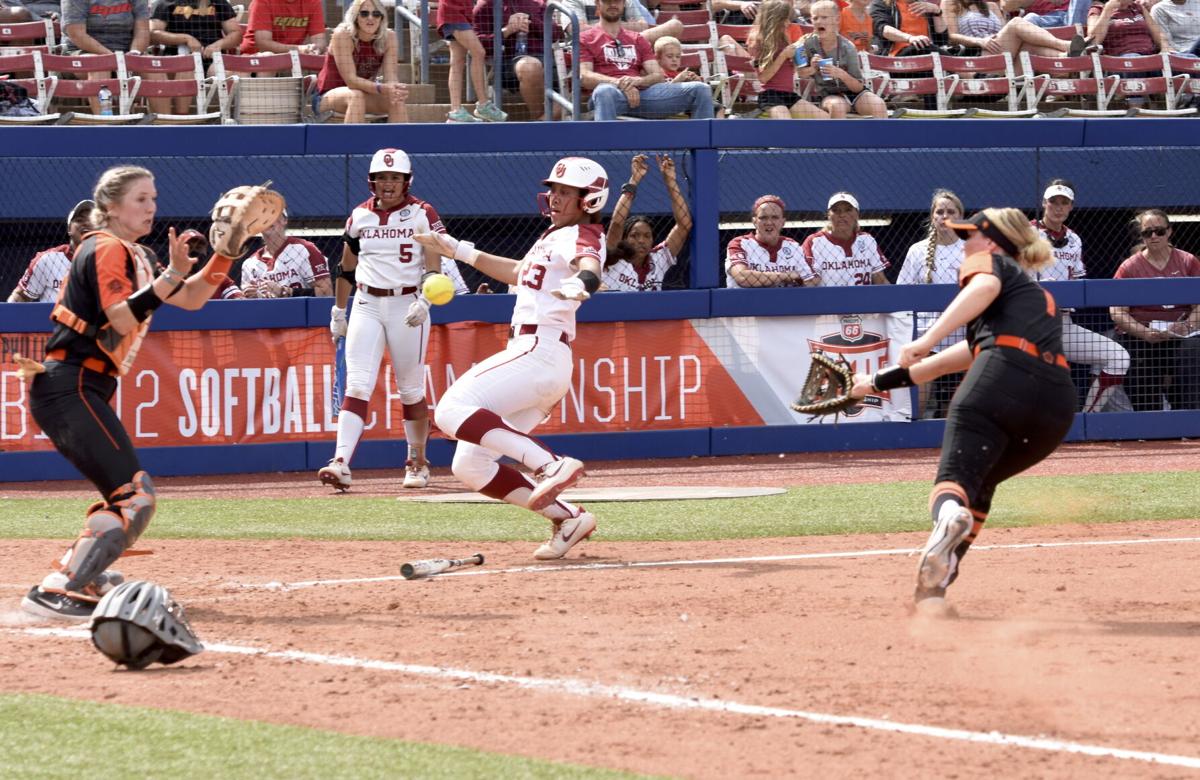 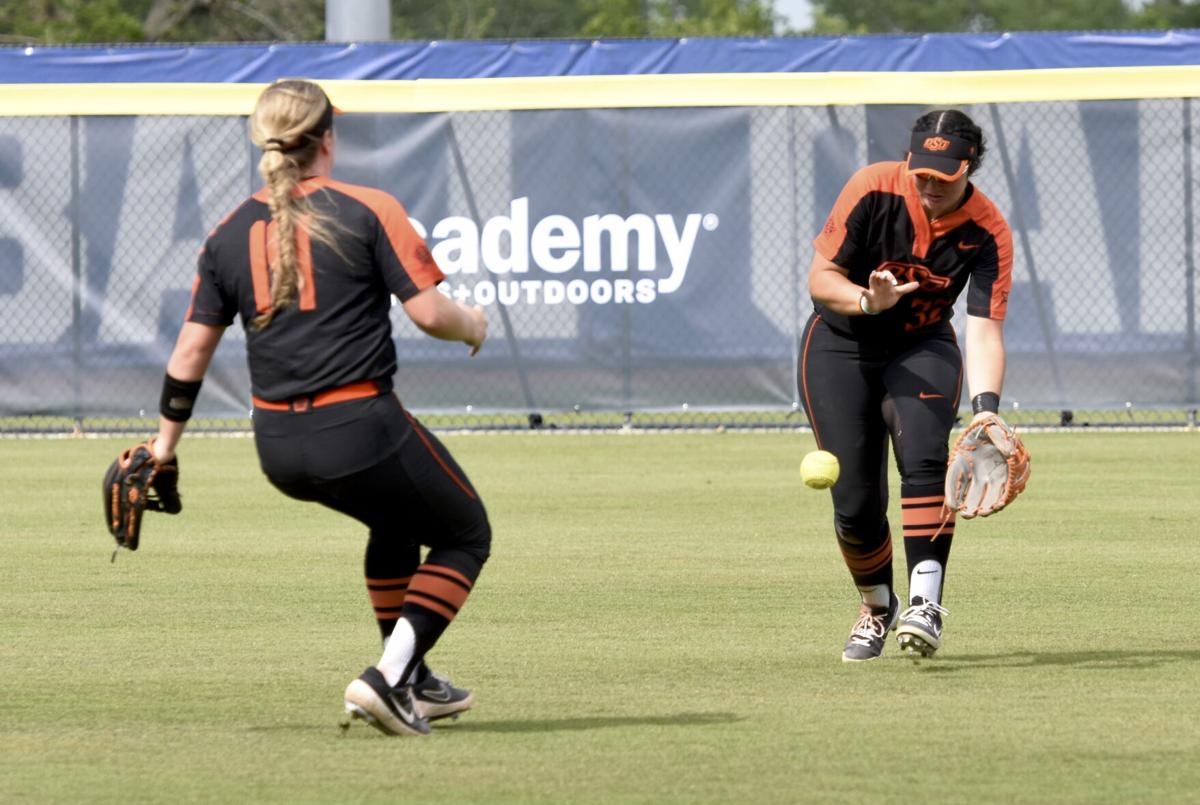 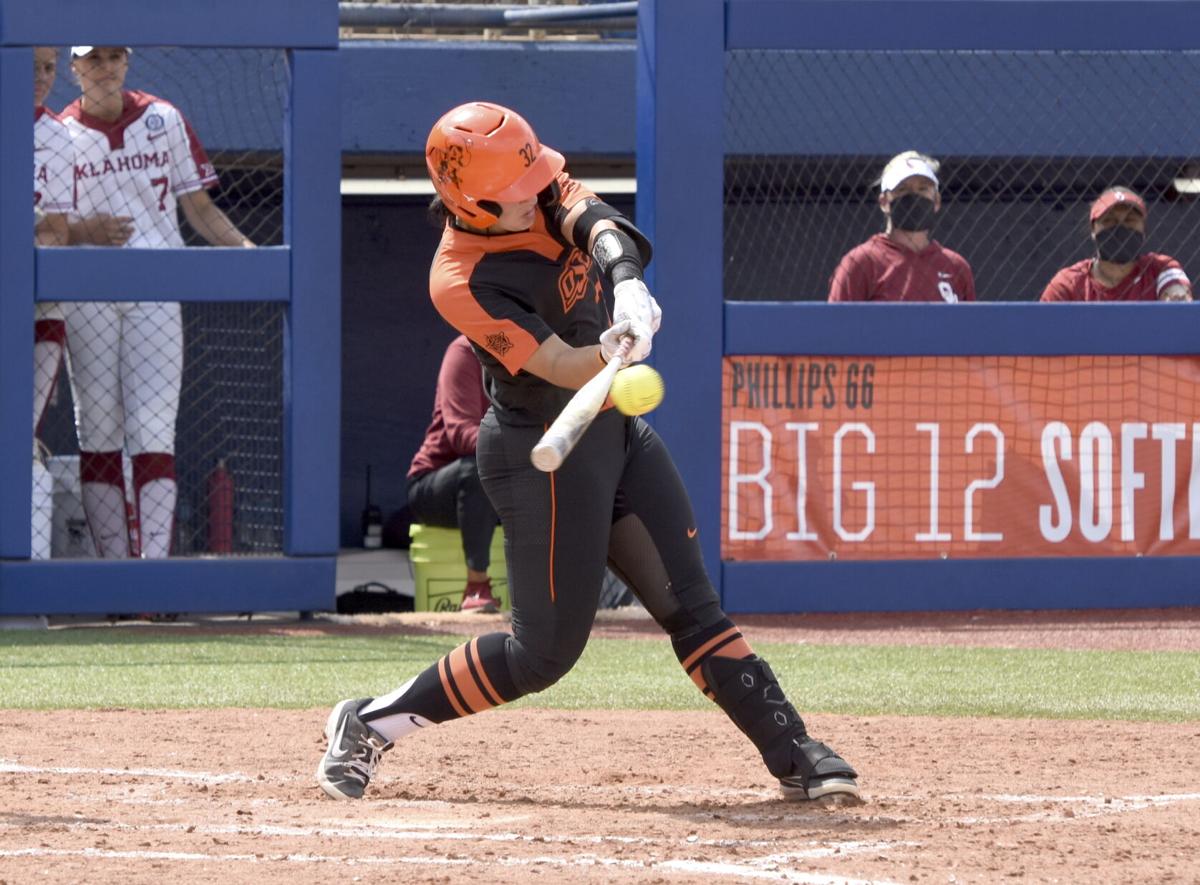 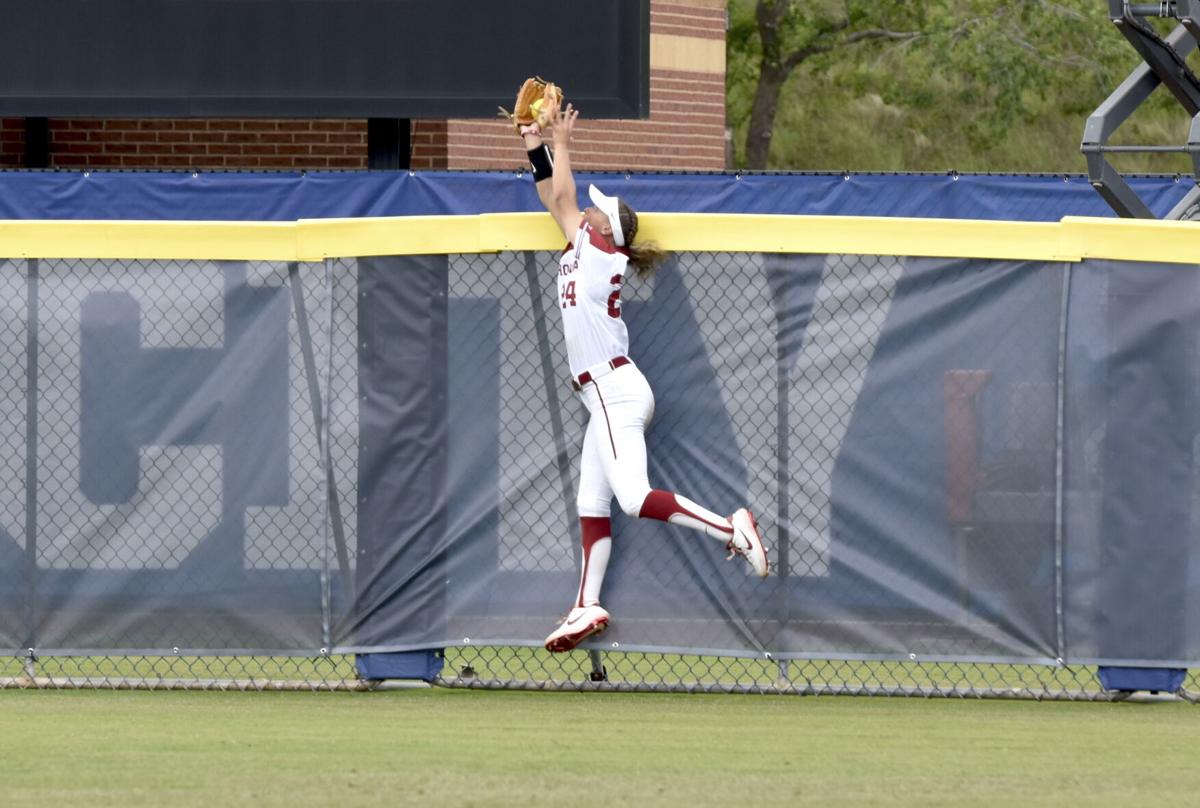 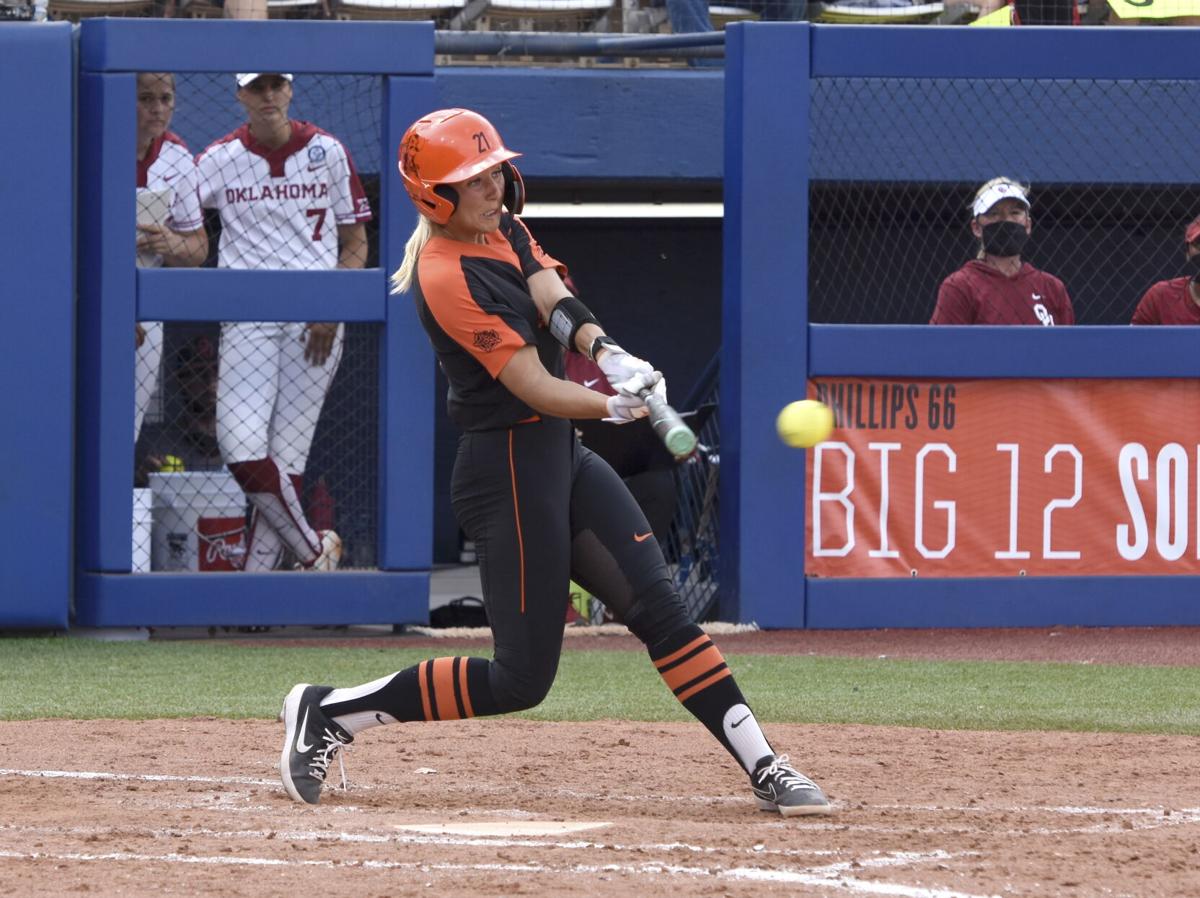 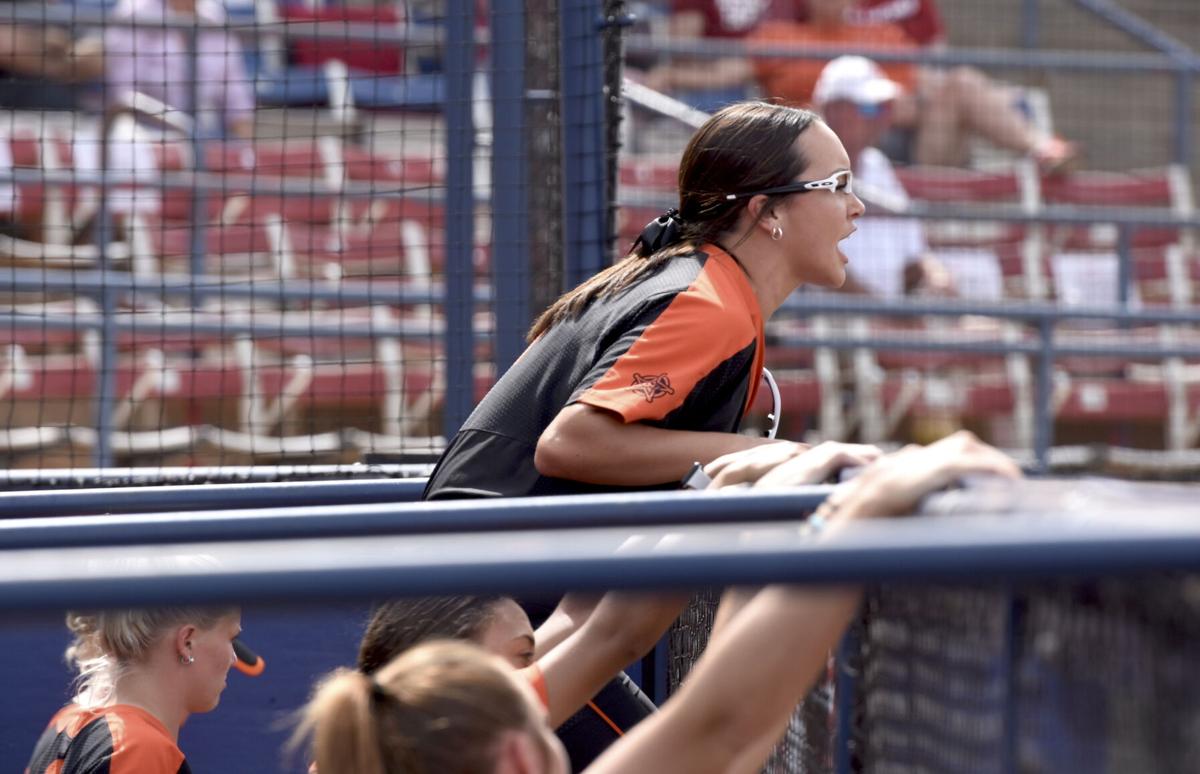 Oklahoma State's Taylor Tuck cheers for her team atop the dugout during Saturday's Big 12 Conference Tournament championship game at the USA Softball Hall of Fame Complex in Oklahoma City. 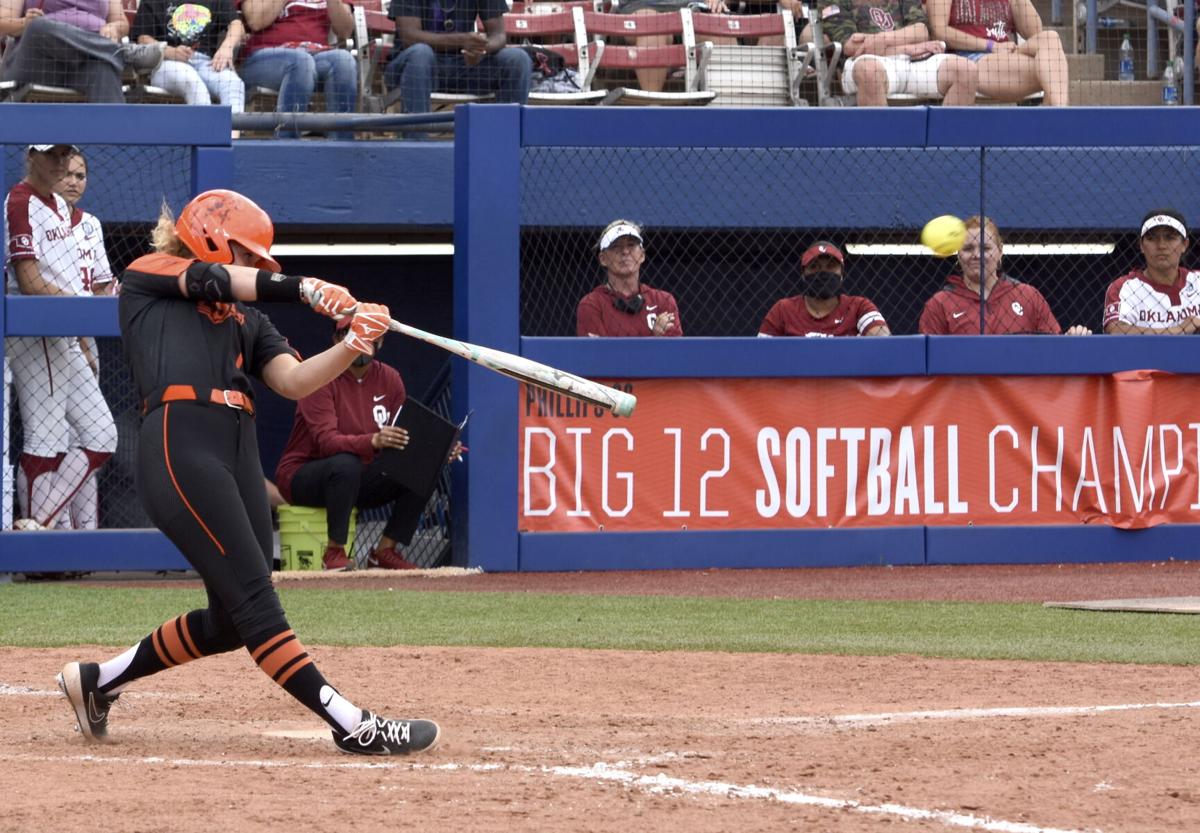 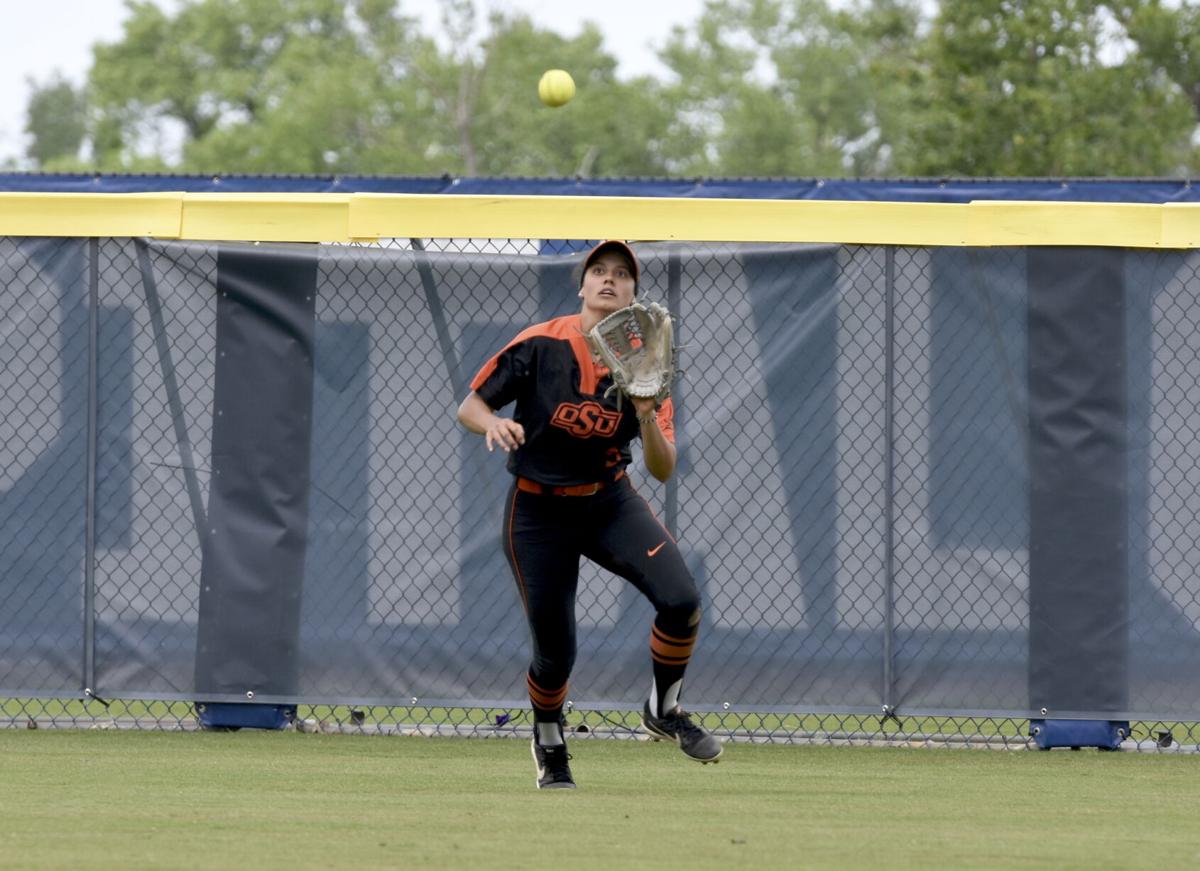 Oklahoma State's Taylor Tuck cheers for her team atop the dugout during Saturday's Big 12 Conference Tournament championship game at the USA Softball Hall of Fame Complex in Oklahoma City.

OKLAHOMA CITY – Oklahoma State had opportunities to score and keep pace with its Bedlam rival Saturday, but it wasn’t able to take advantage of those moments in the loss.

The Cowgirls had the bases loaded twice in the first two innings, but couldn’t push any runs across the plate. When they did score runs – in the fifth inning – Oklahoma’s defense limited those with amazing plays before its offense matched them in the bottom half of the inning.

It was that type of game for the Cowgirls. Top-ranked Oklahoma made highlight reel defensive plays through the game and punished the Cowgirls at the plate all six innings in its 10-2 victory over OSU in the Big 12 Conference Tournament title game at the USA Softball Hall of Fame Complex.

“Obviously, didn’t go the way we wanted it to here today,” OSU coach Kenny Gajewski said. “I don’t know if we just ran out of gas or what, coupled with the fact that (OU) is really good, obviously.”

Saturday marked the third time OSU has lost to its in-state rival in four times during a nine-day span. OSU did defeat the No. 1-ranked Sooners at home to kick off the Big 12 weekend series before the conference tournament began.

However, on Saturday, the Sooners came out swinging and playing good defense to prevent the Cowgirls from keeping pace. The Cowgirls’ only runs came off solo home runs in the fifth inning.

“I thought Coleman made a couple great plays again today,” Gajewski said. “She broke our back. It’s rare that you get robbed on a home run, and we got robbed twice this weekend. It sucks, but it is what it is.”

Instead of the Cowgirls trimming the deficit in half with only one out recorded, the Sooners grabbed momentum with the home run robbery. The Sooners retired the final four OSU batters while their offense scored four runs to seal the run-ruled victory.

“It was our first real opportunity with some momentum, which is kind of what this team goes on,” Gajewski said. “I think (OU) could feel that on their side.”

OU scored a pair of runs on two outs in the bottom half of the fifth inning, matching the Cowgirls’ run total from the top half of the inning. In the sixth, OU reached base with a single and walk before two outs were recorded.

The Sooners’ Jocelyn All, who went 3 for 5 at the plate with three RBIs and two hits in the game, hit a two-run single up the middle for the walk-off hit.

OU grabbed a 6-0 lead, thanks to three runs in the first inning. The Sooners had two doubles and a single in the inning to go along with two walks and a wild pitch that scored the first run.

The Cowgirls committed two errors in the loss. They also walked six batters.

“I didn’t feel like Carrie (Eberle) got hit particularly hard, but that’s what good teams do – they put the ball in play and they spoil really good pitches,” Gajewski said. “I thought that Carrie threw some really good pitches, except in the first. I didn’t think she was very good in the first, but after that, I thought she pitched OK, but we just couldn’t overcome it and got steamrolled here today.”

Both teams turn their attention to Sunday’s NCAA selection show, which begins at 8 p.m. The Sooners are expected to be one of the top eight national seeds, which grants them as a regional and super regional host if they should advance past the first weekend.

OSU is also expected to be a regional host, but is a borderline national seed. Gajewski believes his squad has done enough to be a top-eight seed, but he will have to wait – like everyone else – until Sunday night to find out if he’s correct.

“I think we’ll be in a great spot,” Gajewski said. “I know we were No. 5 in the RPI going into today, so that’s a really good thing. I don’t think this game will have any bearing on what happens next.”